Exclusive From the Set of DEATH HOUSE

Editor’s Note: We are honored to welcome our newest columnist, Jason McFiggins, to the Morbidly Beautiful team. We met Jason through his work as the Social Media Manager for Death House. And we’re thrilled to share the following article, where he recounts his experience visiting the set of this highly anticipated blockbuster horror film.

Beyond the Hype: The Real Scoop on “Death House” Direct From the Set

I recently had the privilege of being on set for a couple days of the much anticipated horror film Death House, and I wanted to write about my experience. Dubbed by media outlets as “The Expendables of Horror” because of its monstrous cast of horror icons, it’s a fitting label but doesn’t capture the feeling and essence of the film that I felt while witnessing it being made. The label implies the film is merely a gimmick — a way to make money and cash in on a bunch of names. I’m here to tell you that Death House is so much more than that.

My first impression of the production was how nice and polite everyone was. The cast and crew were extremely busy and always running around putting set pieces together, setting up cameras, or ironing the outfits for the next scene to be filmed. Yet there was no tension, no arguing, and no lost tempers. It was just a well-oiled machine full of people who each knew what role they played. It was a very confident atmosphere filled with a talented and hard working crew. 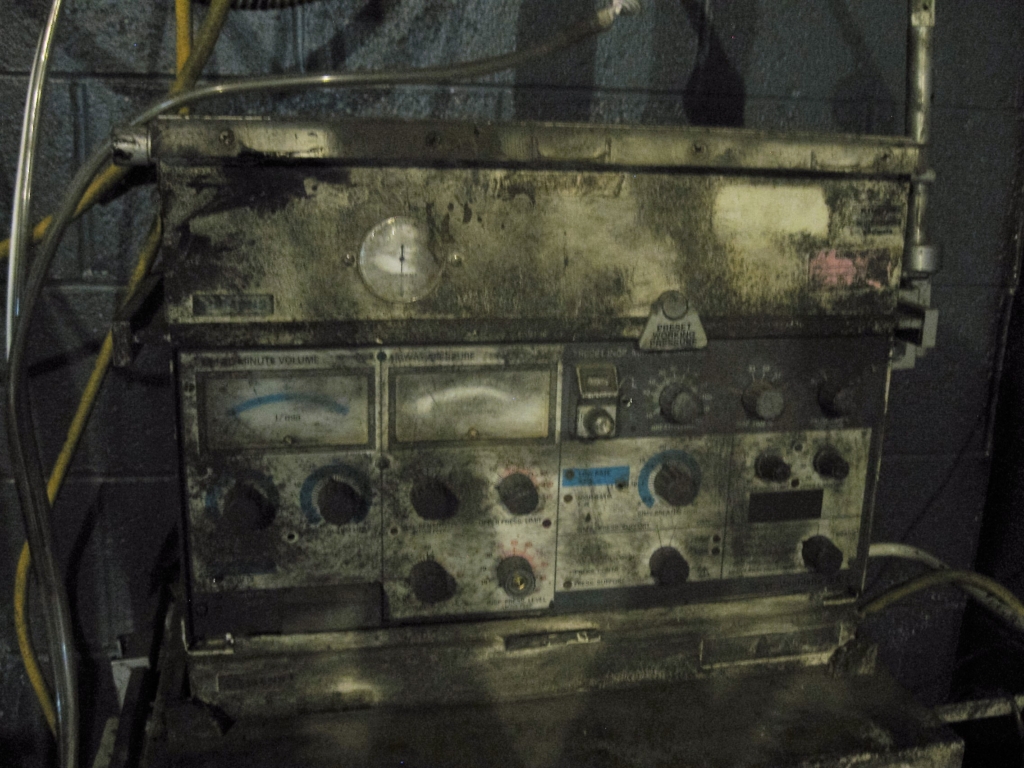 The next thing I noticed, being a horror fan, was the cast. The actors that were on set while I was there were Cortney Palm, Cody Longo, Dee Wallace, Barbara Crampton, Debbie Rochon, and Kane Hodder. Yeah. Can you imagine being able to watch these actors do their job on a movie set? I will admit I was a bit overwhelmed by this and quite starstruck.

I sat next to Barbara Crampton for 45 minutes and watched Cortney, Cody, and Dee film a scene. I ran into Kane at the hotel the night he arrived and we chatted for a few minutes, a real nice guy. I watched the great Dee Wallace effortlessly deliver her lines perfectly. I watched Debbie Rochon nail her scenes in one take and had a fantastic conversation with her about horror and Gunnar Hansen. Cody shook my hand and always said hello, and I was a bit shy around Cortney out of fear of looking like a fanboy. Everyone was nice, down to Earth, and happy to be there. I didn’t get photos with them as I didn’t want to interfere with their work or be a bother. But the conversations, introductions, and handshakes are something I’ll never forget. 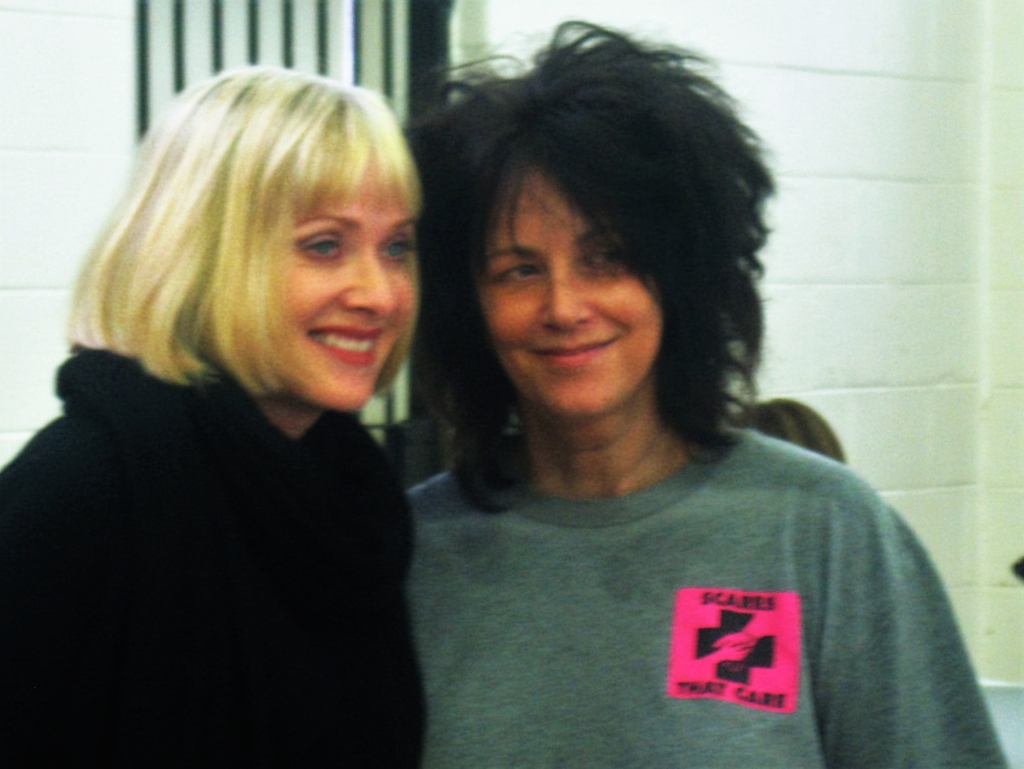 As for the cast as their characters, all looked fantastic in their roles. Cody is the perfect hotshot Agent Novak and Kane is intimidating and spot on as Sieg. Both came well prepared to show the nature of their characters. Dee and Barbara as Dr. Fletcher and Dr. Redmane are perfect casting choices. Dee plays the hardline, no nonsense Fletcher in a way that matches the photos of her in the film that you can see online. She’s a wonderful actress, and it was a joy to watch her act (something I was able to tell her). Barbara is the more lighthearted Dr. Redmane, and her youthful look coupled with her ability to act so naturally and distinctly with her eyes lead to a strong and layered performance. I was in awe watching Debbie Rochon (one of my favorite actresses) give an absolutely chilling performance! Watching her act was very special to me. 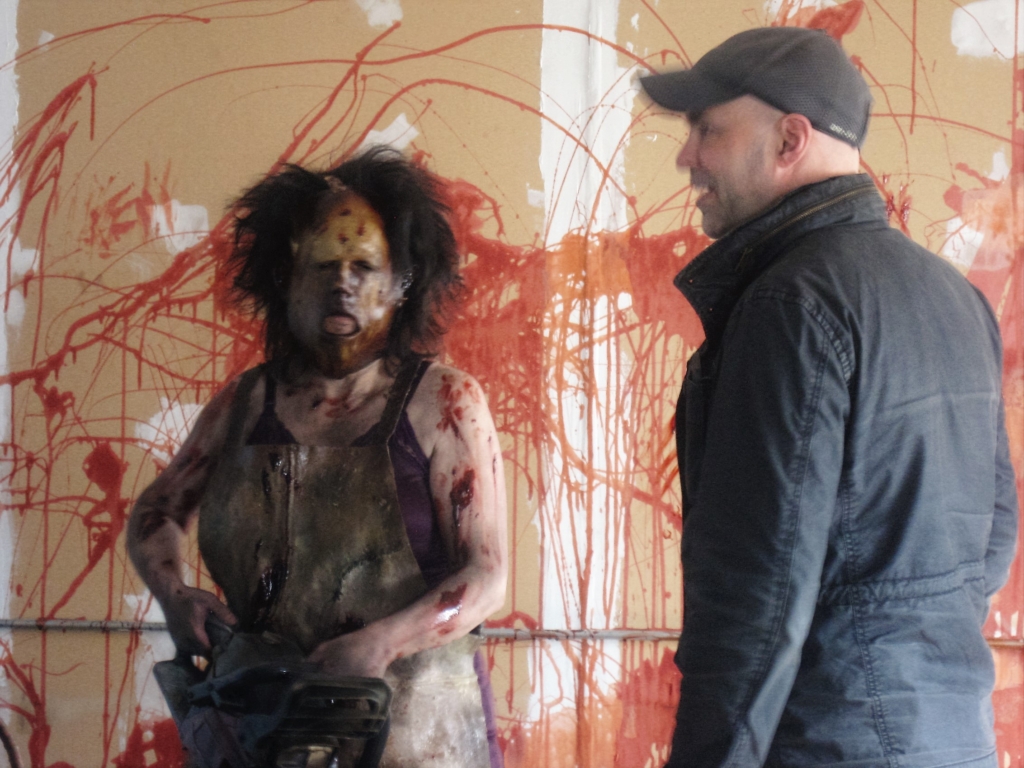 Debbie Rochon in a nod to Gunnar Hansen as LeatherLace with director Harrison Smith.

But seeing Cortney Palm as Agent Boon was probably the highlight of the characters for me. She is perfect for the role and embodies everything the character displays in the script. It’s perfect casting, and seeing her act in this role was very exciting. There are several scenes that she just nailed, whether it be the delivery of a line or the look on her face. Cortney Palm may not be a horror icon (yet) or the biggest name on the Death House IMDb page. But, in my opinion, she just may be the anchor of the whole cast. That’s how strongly I believe in what I saw of her performance here. 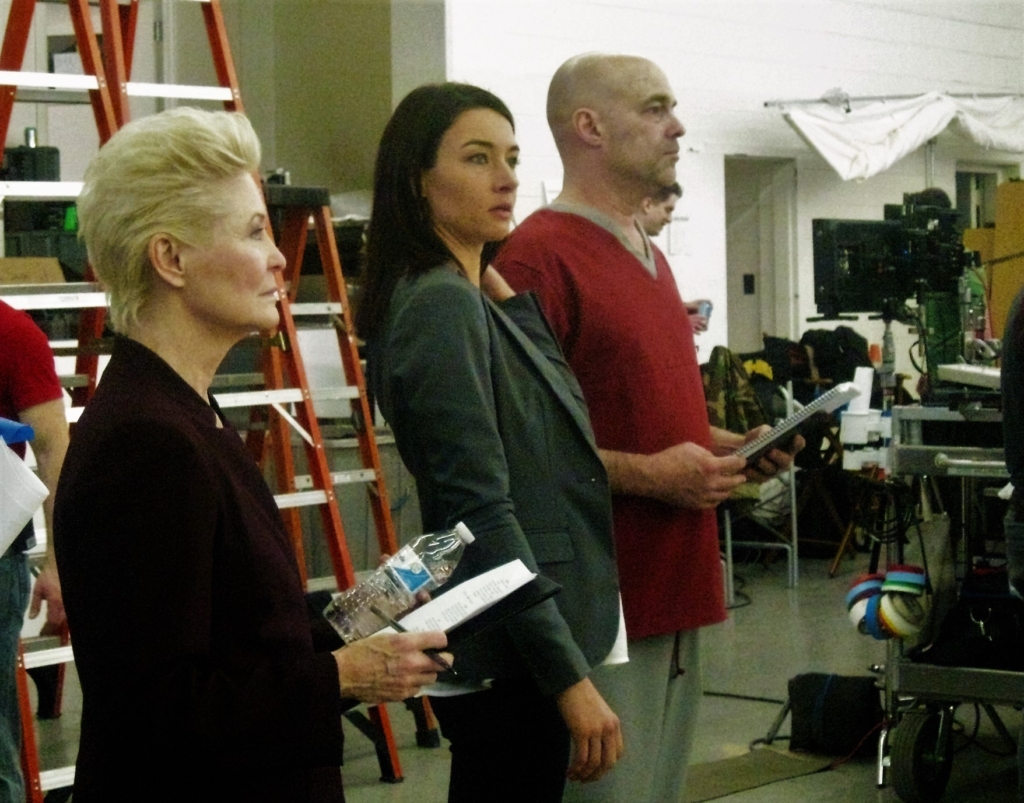 Harrison Smith, Cortney Palm, and Dee Wallace look on as a scene is prepared. Harrison was an extra as a patient in the ward that day!

As for writer/director Harrison Smith, I have to say the guy was a confident leader on set and well respected from the entire crew. He’s open to suggestions from actors or crew, listens when someone raises a question about anything, and has a clear vision for what this film should look like, sound like, and feel like. I remember Cody Longo bringing up a concern he had for a scene. Although it took him a few times to fully explain himself, Harrison listened patiently until he understood what Cody was saying.

Harrison also went out of his way to show me around and asked several times during my stay how I was doing. That’s just how the set was, very thorough and very respectful. Smith is also a walking horror movie encyclopedia and has several horror Easter eggs for fans to pick up on and look out for. He truly intends for DEATH HOUSE to be a film made for horror fans. And they may need to see it more than once just to catch everything. Before filming one scene, Harrison got super excited about the lighting, saying it looked like A NIGHTMARE ON ELM STREET 3. That’s the kind of detail you can expect from DEATH HOUSE, and Harrison Smith is the perfect guy to lead the project.

The set design is incredibly detailed and well conceived. Featuring the quality of Cayo Industrial from Upstate NY, a highly praised haunted Halloween attraction. The set pieces are detailed and gritty when needed and complex and all in sync with each other for a seamless look. Also, the practical effects from PCND/FX and SOTA FX are extremely detailed and complicated creations. These guys take great pride in what they do and it shows. The processing chair that Kane Hodder as Sieg is subjected to is an elaborate sci-fi work of art and, coupled with the lighting of the scene, looked stunning on the monitors and in pictures. I can’t wait to see it on the big screen. 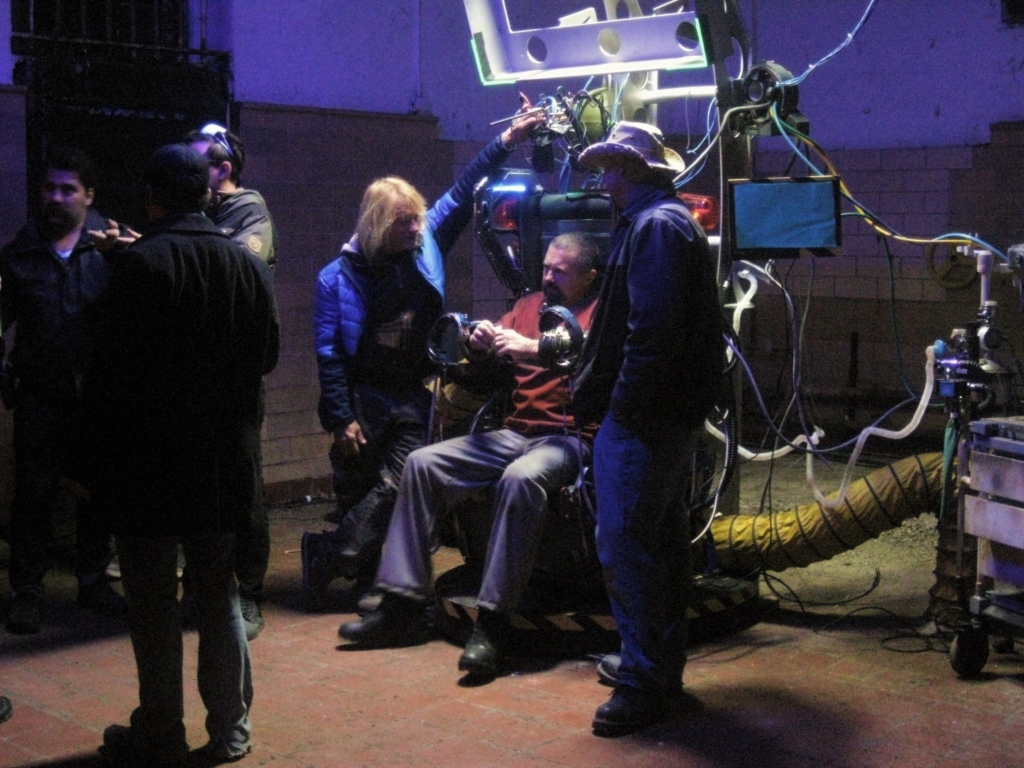 Kane Hodder with George Giordano (Left) of PCND/fx and Matt Falleta (Right) of Sota FX who built “the chair”, a monstrous and functional set piece with lights, wrist cuffs, and smoke.

I remember driving home from my time on set feeling very confident and excited about the outcome for Death House. I was highly impressed with the work ethic of the cast and crew and even more impressed that it all has translated into the film itself. Death House isn’t a gimmicky who’s who of horror, it isn’t a cheap looking cash grab, and it isn’t your average horror film. It’s a smart script with perfect casting surrounded by a hard working, very talented crew and headed by a smart and passionate director who believes very strongly in this film.

Horror fans should get excited.

This article was originally published on Jason’s site The Indie Horror Review, and has been reposted here with permission.