The makers of the Independent Cult Horror Feature SKEW (2011) step it up a bloody notch as they begin their festival run with their follow-up horror flick PEELERS. The sophomore film from Director/Producer Sevé Schelenz is set to have its world premiere at Palm Beach International Film Festival in Florida, April 6th -14th. 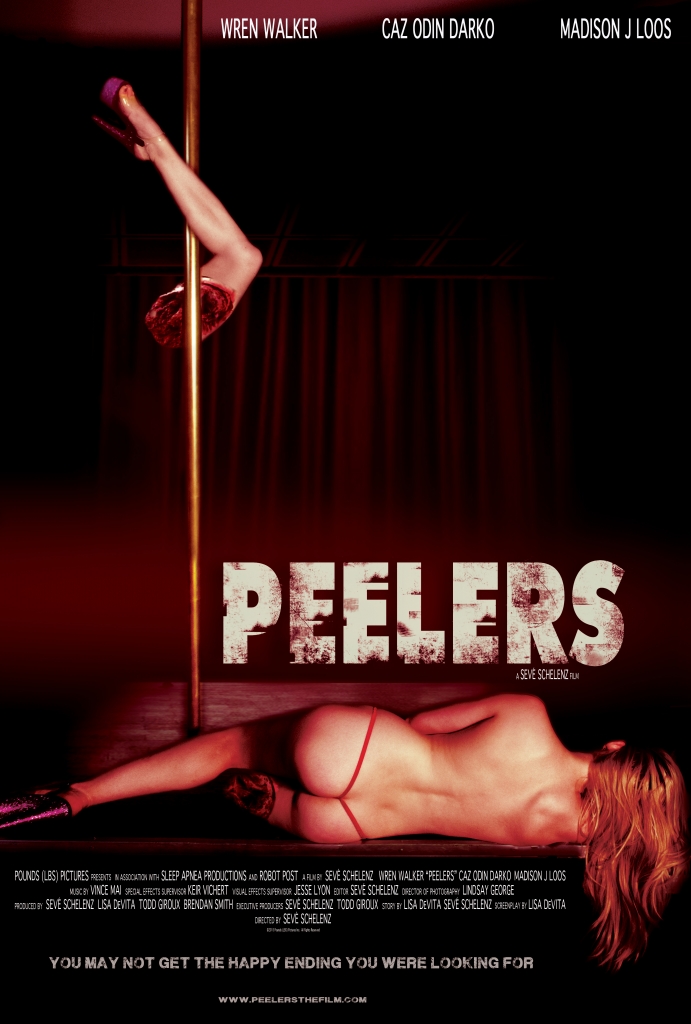 FROM THE MAKERS OF SKEW:

Schelenz made an impressive directorial debut with Skew, a low budget indie horror that saw tremendous success on the festival circuit. The film fits nicely in the found footage/POV subgenre, although it challenges many of the conventions of the subgenre and offers a very unique, intelligent and extremely memorable approach. The film was made back in 2005, although it didn’t see distribution until 2011. This was before the success of Paranormal Activity spawned a slew of copycat films that saturated the market and soured many on the subgenre.

If you’re not typically a fan of these types of films, I urge you to give Skew a chance. You can pick it up on DVD or stream it on Amazon (free for Prime members). It’s incredibly smart and will challenge everything you’ve come to expect from found footage films. Well shot on a very limited budget and well acted with a compelling storyline that does a great job building tension and dread, leading up to a very satisfying payoff guaranteed to make you think. It’s a good sign when I finish a film and immediately want to watch it again to try to piece together clues I may have missed during the initial watch.

After seeing what Schelenz is capable of and his talent behind the camera, I’m very much looking forward to seeing Peelers. It also helps considerably that the trailer looks absolutely amazing. Schelenz promises a whole new ball game of horror, turning the cliché stripper horror sub-genre on its head by giving us a story packed with exciting twists, baseball, strippers of unusual talents and a strong female lead (something I always appreciate).

What starts out as the last hurrah on the closing night of an infamous small-town strip club, quickly turns into a night of bloodshed when a crew of coal miners shows up and with them a deadly contaminant. Former baseball player and current club owner, Blue Jean Douglas has decided to hand over her bar to a new owner and leave town for good. But Blue Jean’s plans are thwarted when she discovers the magnitude of the epidemic that has been unleashed. With victims piling up, Blue Jean must step up to the plate to protect her family, her friends, and her bar before it’s too late and she loses everything she holds dear.

Peelers is being described as “Rodriguez meets Tarantino” and “Not just a great indie film, but destined to be one of the funnest films of 2016.” We here at Morbidly Beautiful can’t wait to screen this film and promise to keep you updated with a full review and release news as soon as it becomes available.