The Woods vol. 1: The Arrow by James Tynion IV and Michael Dialynas 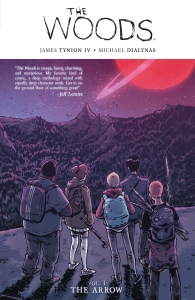 Do you remember in your freshman year when your English teacher made you read a book called Lord of the Flies, and you stared aghast at pages and pages describing a group of adolescent boys who established a governing society on an island after they crash landed? Do you also remember that society quickly and violently falling apart into chaos and madness? That’s basically The Woods, except try creating this society in an entire high school filled with emotion driven teenagers and underachieving faculty members… And, here’s the kicker: They’re on an uncharted alien planet. 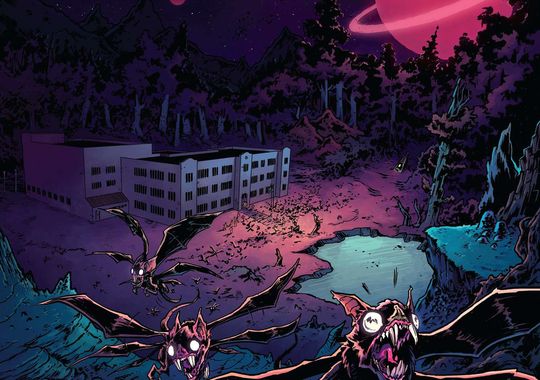 Bay Point Preparatory High School has been spirited away from suburban Milwaukee, Wisconsin to an unknown alien world and no one can figure out why. With tensions already established in the comic’s intro, it’s easy to see that this will be no cheery walk in the creepy, beast filled woods they find themselves surrounded by. With relations between the faculty and student body quickly dissolving into violence, five students make a decision to brave the extraterrestrial wilderness and make their way to the heart The Woods; where arrogant computer whiz Adrien Roth is convinced they need to be after finding a glowing stone protrusion near the school.

With strong writing by James Tynion IV (Batman & Robin Eternal, Batman/TMNT, and Hellblazer for DC Comics) the world of The Woods comes to life very quickly. You can feel the characters animosity and frustration with each other in every piece of dialogue. Michael Dialynas’ artwork is a stunning mashup of color and simple line work; giving you a good sense of character placement and scenery. Dialynas has worked on titles such as TMNT (IDW Publishing), Amala’s Blade (Dark Horse Comics), and Spera (Archaia). Surprisingly, you’ve probably already read some creation from one or both of these two creative powerhouses and loved it. 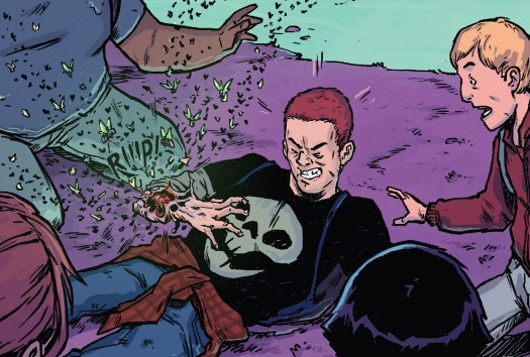 The comic starts off where two girls are talking about college in the locker room. Karen Jacobs is lamenting over missing her college application deadlines while her friend Sanami Ota listens halfheartedly. More characters are introduced in ways that perfectly showcase their personalities and set the tone for the discord soon to follow; I.E. Someone gets eaten by a giant flying weasel bat thing with six eyes in the first issue. I’ve just finished the first volume and already I’m greedy for more. The Woods has four volumes in total, with alternate issue cover art grouped in the back of the book. Not only is this a wonderfully drawn and written story, but it doubles as it’s own “Art of” book; which I am totally excited about. Having additional covers and artists guest work inside of the comic itself is a plus for any collector of creepy nerd fair. 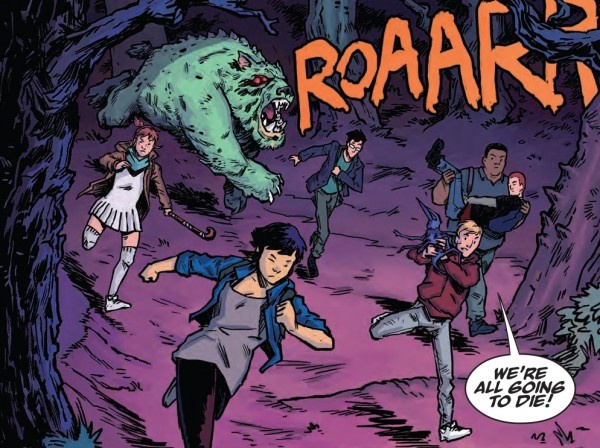 I would say this comic is a must have in your library. The story follows the students at the school as well as the small group braving it in the woods. Complete with six eyed monster bears and gross alien bug bites that explode. The Woods is a fun, creepy, frustrating read that quickly became one of my favorites and I highly recommend picking it up.

To see more from the creators you can follow them on Twitter.com under @JamestheFourth (Tynion) and @theWoodenKing (Dialynas).