I was first introduced to the indie horror Pieces of Talent by a dear friend, and I can’t remember the last time I fell harder for a film. It’s a film that defies explanation, defies categorization, defies any attempt at placing it neatly into a predefined genre stereotype. It’s at once dark and disturbing, while also charming and funny…even strangely sweet and romantic. It’s more than satisfying for fans of gory slashers and brilliant practical effects, but it’s also beautiful and artistic. With a script that delivers the goods for die hard horror fans but holds its own as a truly great film outside the genre; It’s exquisitely shot, perfectly scored, and powered by intensely compelling performances from the leads.

I knew POT was produced with a shoestring budget, marketed with a nonexistent budget, and was nothing short of a sincere labor of love for filmmakers Joe Stauffer and David Long. But it wasn’t until the release of the special, limited edition blu-ray of the film that I fully appreciated the extent of it all.

Let’s talk about that blu-ray. A film that was already remarkable for its visual appeal becomes even more breathtaking with a beautiful blu transfer. Joe, a multi-talented musician and artist, is an obvious perfectionist with an impeccable attention to details. And as with previous VHS and DVD releases of the film, every detail is perfect. In fact, he released an unbelievable four versions of this blu-ray as a love letter to fans. Three versions feature extremely limited edition illustrated cover art and come signed by Joe and hand numbered. The fourth is a standard edition blu–ray, designed with that same artistic flair that made the DVD look so damn good.

However, no matter what version you pick up, what really makes this blu-ray worth owning is the exclusive special features Joe added for this release. Highlights include candid interviews with Joe, David, and lead actress Kristi Ray. And this is where I went from serious lust to undying love. Stauffer’s interview was first, and it’s impossible to hear him talk about this film without truly feeling his incredible passion and sincerity…and it becomes painfully clear why this film has the power to move so many people and create such a rabid fan base. 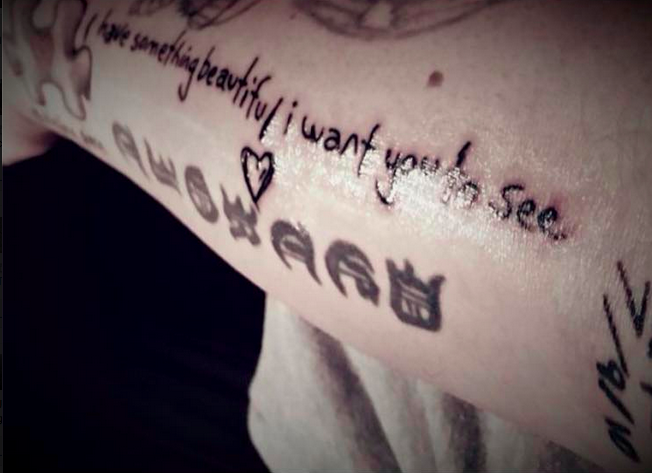 This is a film that found an audience with zero marketing budget. Word of mouth alone has driven its growing cult following. In his interview, Joe references the fans who are so passionate about this film that they’ve tattooed their body with the film’s tagline, “I have something beautiful I want you to see,” and other POT artwork. There’s even a group of dedicated fans who are part of the Shutter Blade Media (Stauffer’s production company) Street Team, also known as The Skeleton Crew. They help support grassroots marketing and social media efforts, spreading the POT gospel and helping as many new fans of indie horror discover this beautiful film as possible.

Joe Stauffer is a filmmaker, sure, but he’s an artist first and foremost. And his work truly feels like art, which is what I think makes it so special. Beyond that, people have connected with the amount of heart that was obviously put into the film. And that’s what resonates more than anything when you hear Joe talk about the blood, sweat, tears and years that went into making something so personal and meaningful. As Joe says, after making something like this,

“You should have a little bit less soul inside of you because you’ve put it into your work.”

Newcomer and future scream queen Kristi Ray shines as the lead Charlotte in the film. She talks with sweetness and sincerity about how inspired she was by Joe and David’s passion and what it meant to be a part of something like this, to be a part of making something worthwhile that everyone truly believed in.

David Long, who plays a twisted but endearing version of himself in the film, gives one of the best interviews. He shares the origins of the film, what it was like bringing this dream to fruition, and why they made the decision to keep this film truly independent in spite of some very attractive and lucrative offers from big players in the industry.

If you love intelligent and genre-bending horror, if you’re a fan of independent films that put artistic integrity above profits, or even if you just appreciate good film in any genre…do yourself a favor and get your hands on a copy of this film. You can purchase copies of the blu-ray and DVD online at PIECESOFTALENT.COM, or even grab an inexpensive digital download. But, if you’re able, I highly recommend owning the blu-ray version, as the special features alone are more than worth the investment.