A TASTE FOR THE DISTASTEFUL: Eli Roth’s Green Inferno

After sitting in limbo for two years, Eli Roth’s highly anticipated cannibal horror film The Green Inferno is finally getting its theatrical release. Open Road originally planned to release the film after picking up rights in 2013. However, it was pulled from distribution less than a month before its intended US release due to financial difficulties with the production company Worldview Entertainment. The film is finally seeing the light of day thanks to BH Tilt, Blumhouse Productions’ new label dedicated to multi-platform releases for genre film, in collaboration with Universal Pictures and High Top Releasing. 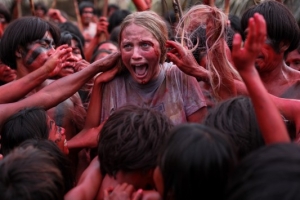 The film, about a group of college students and wannabe activists who travel to the Amazon to protect an indigenous tribe from destruction at the hands of an evil corporation only to fall prey to the very cannibalistic natives they attempted to save, is an obvious homage to cannibal horror films from the 1970s and 80s. In fact, Green Inferno was the working title of ‘80s classic Cannibal Holocaust.

Dedicated horror fans are sure to spot many other overt and subtle nods to groundbreaking genre classics made by bold Italian directors like Ruggero Deoadato and Umberto Lenzi. Films like Cannibal Holocaust (1980) and Cannibal Ferox (1981) raised the bar for horror, setting new standards for gore and pushing the audience’s capacity for stomach-turning scenes of torture and violence to dizzying new levels—something Roth himself has surely benefited from.

The highest compliment I can give this film is that it’s exactly what you expect it to be.  This isn’t going to convert any new fans to team Roth, but it should definitely go a long way to energize the base and satiate the hardcore horror and gore fans.

Roth doesn’t hold back with Green Inferno. It’s unflinching in its violence and brutality, shamelessly indulges in gleefully excessive gore, and brandishes its hard R-rating with unapologetic pride.

And to me, that’s more important than any critique of the actual film itself. At the time of this review, the gory R-rated release has received only a 38% approval rating from critics on Rotten Tomatoes, and an only slightly more favorable 44% audience rating.

Eli Roth has been criticized, perhaps fairly, for placing style over substance…for being singularly focused on ramping up the shock and gore at the expense of everything else. But that misses the point. Roth does here what he does best. He makes the exact film he wants to make, without compromise, and caters to an audience the rest of Hollywood is more than happy to ignore. In this instance, Green Inferno should wear its harsh reviews like a badge of honor. 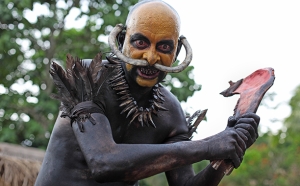 Many horror fans have been deeply concerned over the perceived ‘death of the horror film’ as a result of increasing pressure on filmmakers to churn out watered, down, formulaic films with greater mass appeal. In spite of harsh criticism from genre fans, filmmakers continue to cater to the PG-13 crowd in an effort to expand their reach and box office appeal. On average, PG-13 movies make more than three times what R-rated films do at the box office in the United States. And it’s rare for a horror movie to make the R-rated top ten.

The PG-13 rating was invented in response to movies like Poltergeist and Gremlins, which lacked the gore or nudity to earn an R, but were clearly not intended for all ages. Unfortunately, over the years, the rating has come to be associated with low expectations, often signaling a movie that’s been compromised by the filmmaker to appease the studio—resulting in an inferior film devoid of true scares, authentic horror, or artistic integrity.

The US film certification body, the MPAA, has given Green Inferno a solid R-Rating, citing:

“a glorious throwback to the drive-in movies of my youth: bloody, gripping, hard to watch, but you can’t look away.”

Green Inferno isn’t going to win any awards, it won’t break any box office records, and it won’t convert any non-believers. And that’s ok. My hope is that this film receives enough love from the horror community and pulls in enough box office bucks to create a more promising future for filmmakers like Roth and for fans of the more extreme end of horror.