Posted by:
Tags:  Along Came The Devil exorcism indie horror possession The Exorcist

Despite great performances solid effects and a strong ending, “Along Came the Devil” is weighted down by a poor script and lack of originality. 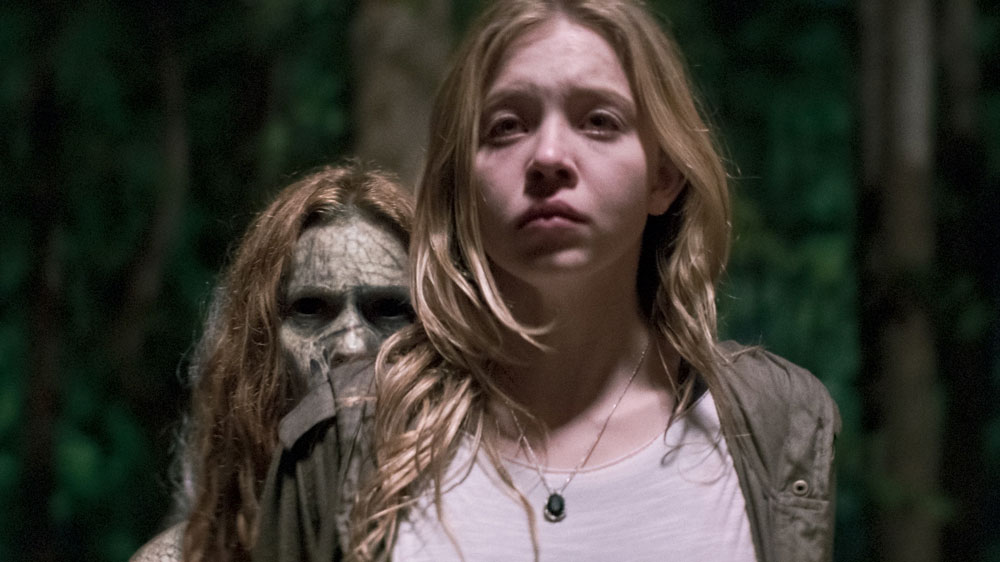 The bar for exorcism movies was set high when William Friedkin unleashed his masterpiece, THE EXORCIST, upon the world. Many aspire to reach the heights of the 1977 film, but few get close to matching the dramatic impact and horror of THE EXORCIST.

ALONG CAME THE DEVIL, directed by Jason DeVan and co-written with his wife Heather DeVan, is purportedly based on true events. The story is based on a family from Brazil that the DeVans had become friendly with, according to a recent interview with Jason. As is par for the course with movies based on true events, names, places, and the details of the events have been changed to protect the real family and add some dramatic jolt to the movie. 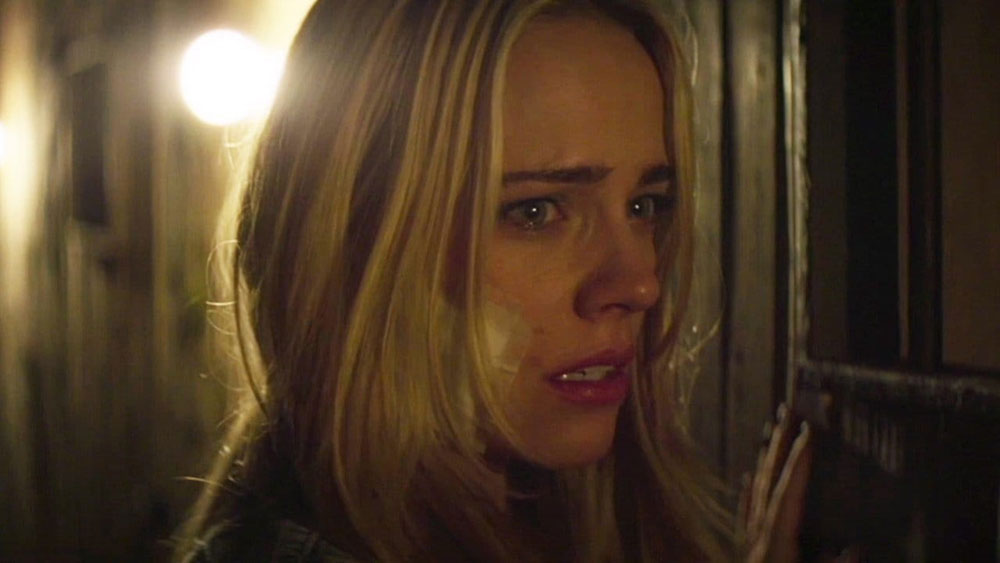 Ashley (Sydney Sweeney) is returning to her hometown 10 years after a series of terrible events happened to her and her sister Jordan. The title card states that Jordan was a protector of Ashley, but the film never shows that relationship. Aside from the pre-title scene, Jordan is not seen in the movie again. When Jordan goes to college, Ashley is sent to live with her Aunt Tanya (Jessica Barth). Shortly after moving in with her Aunt, Ashley begins to experience strange occurrences in the house and at school.

As Ashley attempts to acclimate to her new home and school, we’re introduced to two local evangelical priests, Pastor John (Matt Dallas) and Reverend Michael (Bruce Davison). Pastor John is a hip, popular, bring the church up-to-date with the times kind of priest. John is also, in one scene, portrayed as a bit of a leering creep, but this is not followed up on in the movie.

Reverend Michael is a priest teetering on the edge of bitterness. His faith is broken and he turns to drinking at times to sooth the rough edges.  Reverend Michael, as Pastor John soon finds out, also has an extensive collection of books about demons and exorcisms.

Ashley quickly befriends a girl her age at school, Hannah (Madison Lintz) who is into paranormal research and studying ways of contacting the dearly departed. Contacting the dead doesn’t involve a Ouija board in this movie, but it might as well have. As Hannah hears about Ashley’s disturbances and story of her dead mother, Hannah is convinced they can contact Ashley’s mom and maybe bring some peace to Ashley’s world.

Instead of a Ouija board, Ashley and Hannah do a kind of “Bloody Mary” act in front of a mirror to call upon Ashley’s mom, but what they call forth is a dark entity that was waiting for an opening to start a full possession of Ashley.

The movie has a single mother, in this case the Aunt, taking care of a teenage daughter/niece.  There’s a young priest paired with an older, experienced priest working together to perform the exorcism.  The movie even has a woman (Barbara Goodson) voicing the demon’s voice. I wouldn’t be surprised to hear stories of Barbara being tied to a chair, chain smoking, and drinking scotch to get in the right head space and voice to perform as the demon.

ALONG CAME THE DEVIL touches all the expected moments of an exorcism movie: strange sounds, moving objects, disbelief, smells, flies, cursing, insults, flustered priests, and upset family members. The movie is a little too paint-by-the-numbers to be interesting. While DeVan works to make sure all the stereotypical exorcism bases are covered, the movie plays very clunky as if there are gaps missing in scenes.

For instance, there’s a scene where Aunt Tanya receives a call at work that there’s been an incident with Ashley at the school.  The scene cuts to Hannah leaving the school after Ashley to ask her what happened. There’s no explanation of what happened to Hannah at school that made the call necessary.

A major character is killed by the demon and it’s never followed up on except as a throwaway bit of dialogue later on.  I had thought that the death was being entirely ignored until it was touched on in a conversation between Aunt Tanya and Doctor Carraz (Ahmed Lucan) who may also be her boyfriend.

Even the conversation about the death, like the death scene itself, is a throw away:

Dr. Carraz: “there was an accident involving ——–“

And then it’s on to other business. I haven’t seen so little attention given to a death since General Leia walked past Chewbacca to hug Rey after Han Solo was murdered.

The exorcism scenes themselves, while well done, look and sound like THE EXORCIST. There’s nothing new happening to shock an audience.  The makeup is well done, the effects are solid, and Sydney Sweeney is phenomenal as fully possessed Ashley. 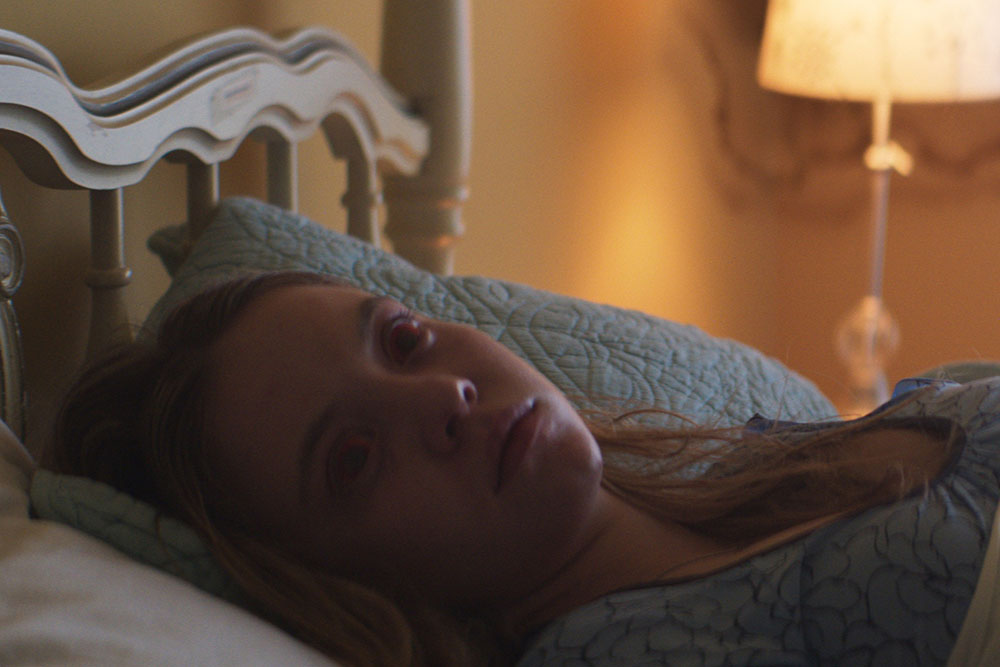 Honestly, just as I was saying to myself that ALONG CAME THE DEVIL was  a weary retread of a far greater movie, DeVan throws a curve ball at the audience. DeVan gives us something that, I think, hasn’t been shown in previous exorcism movies.  It’s not enough to lift ALONG CAME THE DEVIL out of its ordinariness, but the ending is vastly more interesting than the rest of the movie before it.

The final scenes didn’t make me want a sequel, but it did make me believe there was a far more interesting movie that could have been. Unfortunately, we end up having to slog through the first 80 minutes of ALONG CAME THE DEVIL to get to the most fascinating and even terrifying moments of the movie.