With the recent passing of George A. Romero, it seemed fitting to kick off our month-long Horror celebration with one of his most beloved films, Creepshow. 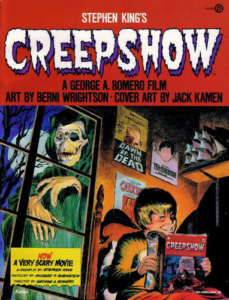 I’ve made no bones about Creepshow being second in my Top 3 horror films of all time (American Werewolf is #1 and the new IT is #3). There is something magical at play with this movie, and it is evident by each frame that everyone involved is having a blast while they were filming.

Creepshow is the perfect storm for horror fans, as George Romero teamed up with Stephen King and Tom Savini to create a grotesque, loving tribute to the old EC Comics that were published back in the 50s.

EC was the home of TALES FROM THE CRYPT (which also saw a huge resurrection in the late 80s thanks to HBO), THE HAUNT OF FEAR, THE VAULT OF HORROR and MAD (yes that MAD). EC was blamed for childhood delinquency and bad behavior in children, so the comics code was created to regulate what was considered tasteful in comic books. Shortly after EC folded and was eventually absorbed by DC Comics. 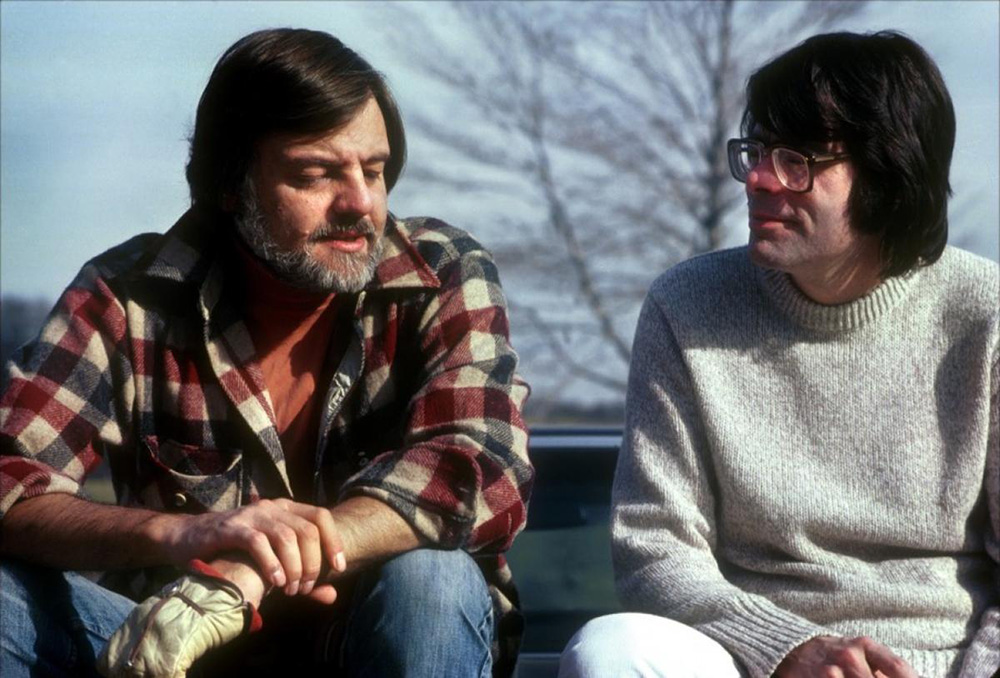 Those comics resonated with King, and when the chance to collaborate with fellow Horror Master Romero came up, they agreed that they should do a tribute to the lunacy of those old EC funny books. The stories — horror filled morality tales that had a twist where the villain of the story met with his expected comeuppance — were the perfect fodder for King and Romero’s project.

The Creepshow tagline promised “The Most Fun You’ll Ever Have Being Scared!” And for the most part, the film does live up to its promise, as the “5 Jolting Tales Of Horror” come to life before our eyes. 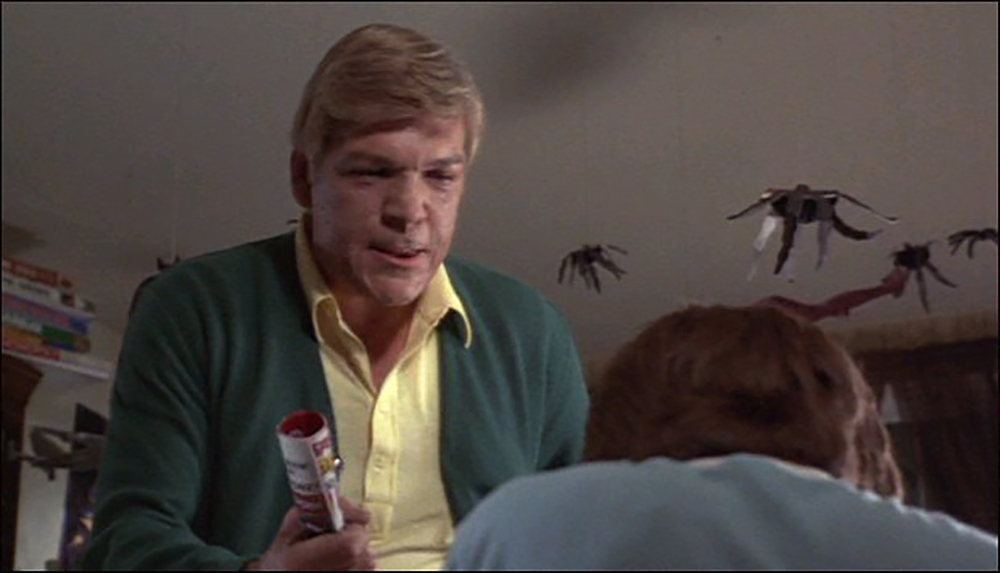 Creepshow starts on a quiet little street in Anytown, USA, and it’s evident that its close to Halloween time by the Jack O’ Lantern in the window. A young boy named Billy (played by future author Joe Hill, King’s own son) is getting yelled at by his father Stan (Tom Atkins in a cameo, without his trademark mustache) for having a horror comic book. No son of his will read that “horror crap”.

After slapping Billy for calling him out for having sex mags in his underwear drawer, Stan makes Billy tuck in and proceeds to throw the “worthless piece of shit” CREEPSHOW comic book into the garbage can. Attentive viewers can hear Stan going over what they will be seeing shortly over the course of the movie, as The Creep appears at Billy’s window causing the comic to come to life.

The opening masterfully sets the tone of the film, while simultaneously setting up the plot of the 5 stories, which are also shown in their comic book form during the opening credits. 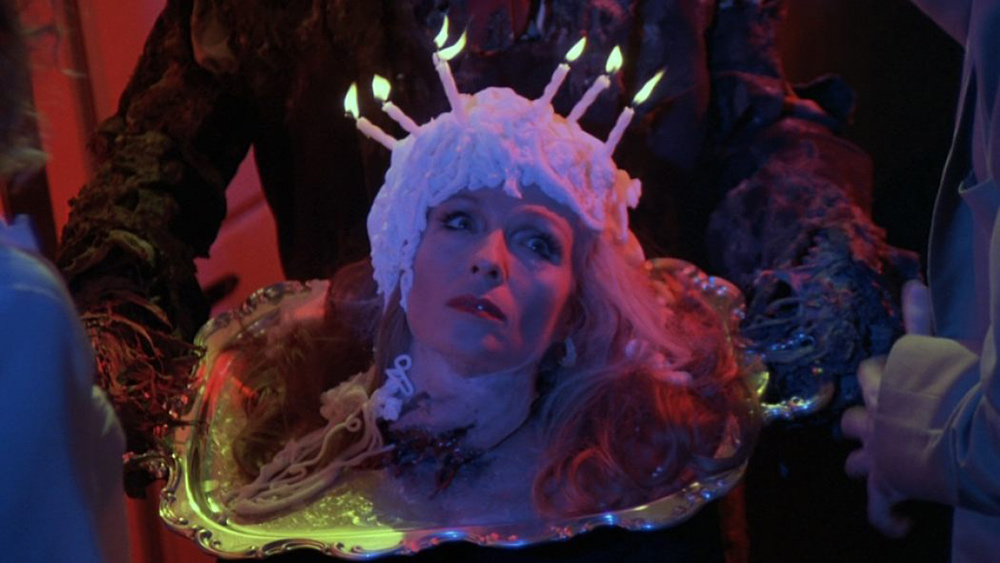 The Grantham family are gathered at their estate to celebrate Father’s Day, only they hold a dark secret as to how they gained their riches. Nathan Grantham, the patriarch of the family, was murdered many years ago by his unhinged daughter Bedelia on Father’s Day. Nathan returns from the grave to exact revenge on his greedy heirs and claim his long lost cake.

This is a perfect way to start the stories off with a tale of murder and revenge from beyond the grave. While some of the acting (Ed Harris disco dancing) and dialogue is a bit campy, Savini’s makeup effects on Nathan are top notch — and the ending to this tale is near perfection. WHERE’S MY CAKE BEDELIA? IT’S FATHER’S DAY AND I WANT MY CAKE!

THE LONESOME DEATH OF JORDY VERILL 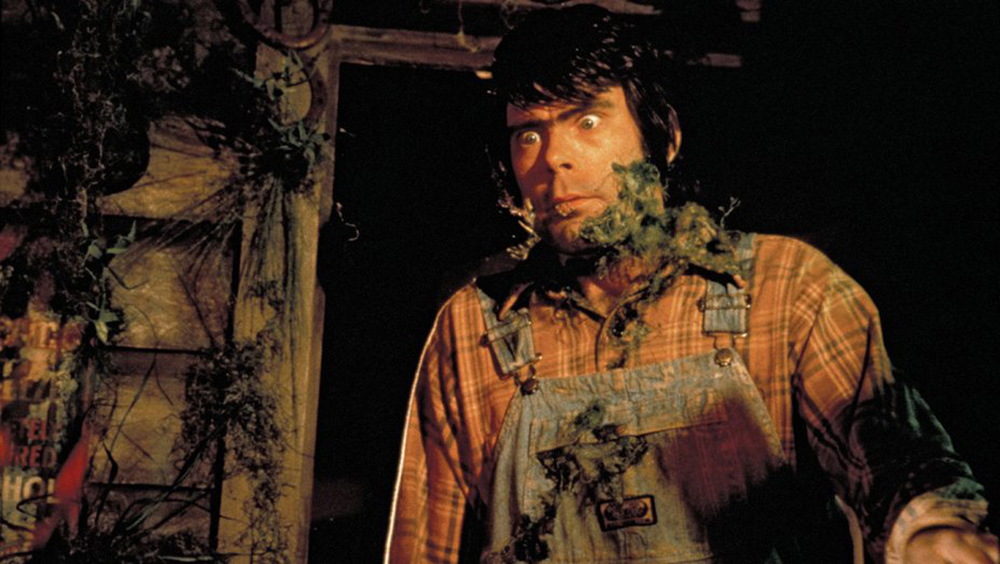 When a simpleton farmer has a meteor from outer space crash land on his farm, he decides to sell it to the local college. Unbeknownst to this buffoon, the meteor is carrying a plant-like alien parasite that makes everything grow. This is probably the weakest of the stories, and it’s really light on the horror. King himself overacts as the moronic Jordy, and the story, while funny due to this aspect, has a heartbreaking finale. METEOR SHIT!

SOMETHING TO TIDE YOU OVER 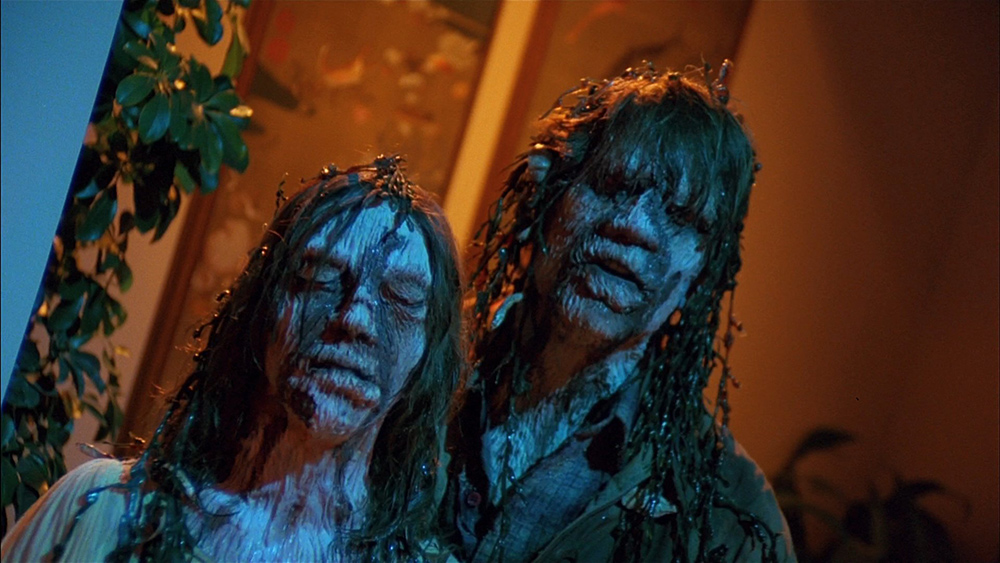 A jilted husband plans an unorthodox revenge on his cheating wife and her beau. The 2 lovers are literally up to their necks in danger, with each breath potentially being their last. This is one of the finest stories in the film that is only propelled by the direction, script and acting. In fact, this would be the best one, if not for what follows this story.

Funnyman Leslie Nielsen ( THE NAKED GUN) turns in a deadly serious performance as the malevolent Richard. Nielsen shines as the antagonist with such a gleefully, wicked charm that you are ALMOST rooting for him. Ted Danson and Gayle Ross co-star as the lovers who have crossed the wrong man. The finale is one of the scariest and funniest of the anthology. I CAN HOLD MY BREATH FOR A LONG TIME. 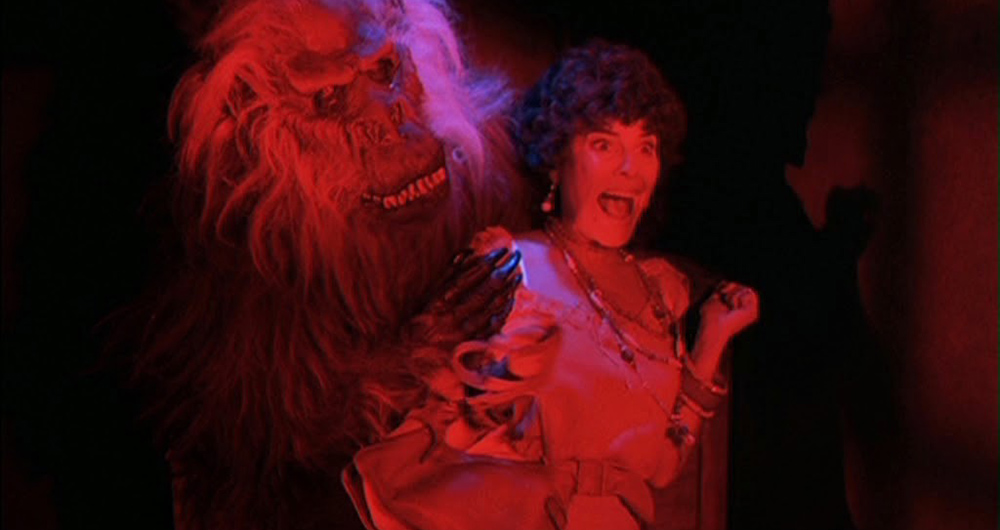 A professor finds a mysterious old crate under the stairs of his university that may contain something far deadlier than some old relic. Poor Henry is verbally and mentally abused by his shrewish wife. When Henry finds out about the crate, he concocts a devilish plan to rid himself of his wife and help out his best friend. This is without a doubt the best story of the movie. Savini’s work truly shines in THE CRATE, with the creation of Fluffy, the tiny crate creature. Is it a Yeti? Abominable Snowman? Tasma