“Blood Paradise” is a stylish arthouse horror film with a surprising humor and Hitchockian suspense, but its strange sensibility isn’t for everyone. 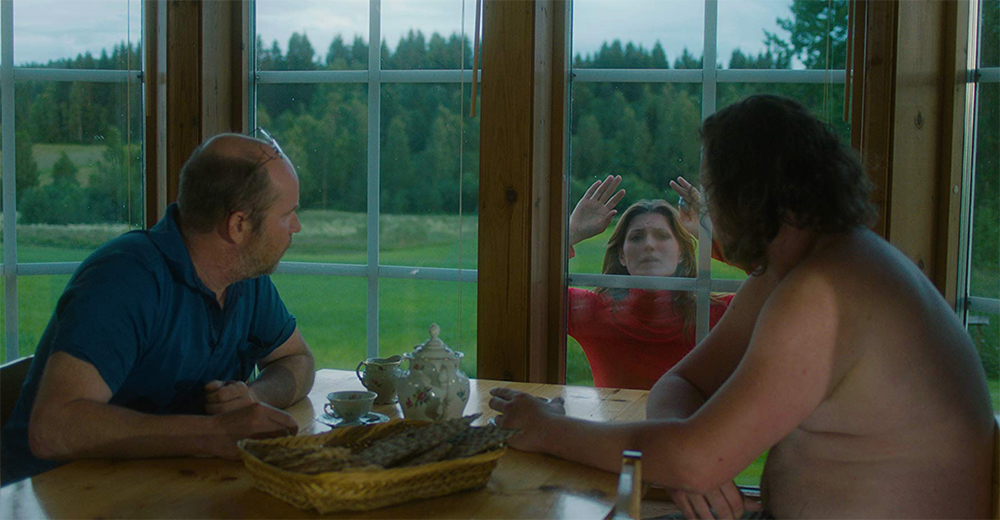 One of the most recent releases from Artsploitation Films, Blood Paradise is a mostly English language film set in Sweden that follows a writer, Robin Richards, who seeks out the idyllic Swedish countryside to reset and recharge her inspiration. However, the beauty of the landscape acts as a stark backdrop to something much more sinister happening on a small family farm.

In the film, producer Andréa Winter stars as Robin Richards, a best-selling crime writer who has recently hit a slump after the critical bombing of her most recent book. Robin has been encouraged by her editor to take a trip outside of the hustle and bustle of the city to recharge her batteries, get away from the critics, and focus on her next project. Director Patrick Von Barkenberg has a small role as Robin’s beau, Teddy, and his peculiarities seem like more than enough reason for her to reluctantly agree to a getaway in the idyllic Swedish countryside. 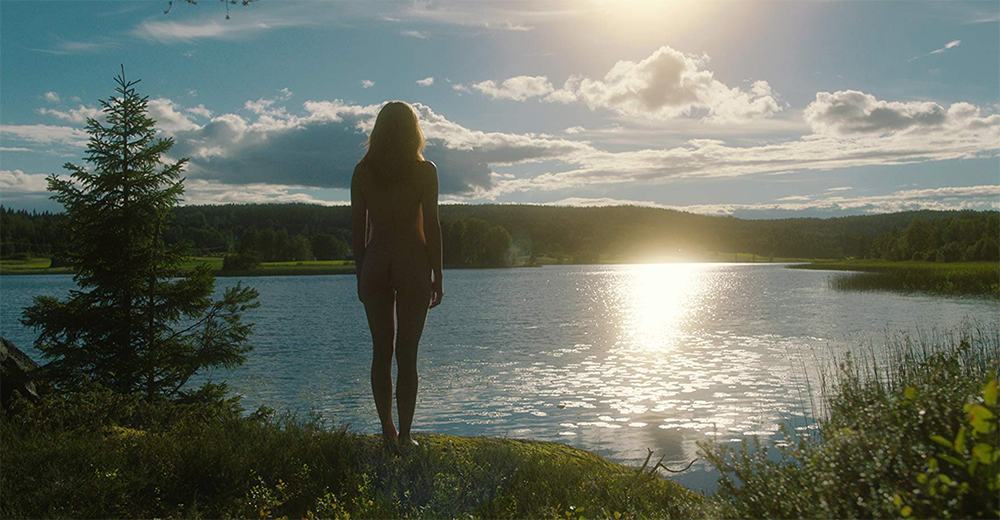 This is a set-up that has been used in horror films countless times.

Whether it’s Hush where the protagonist ends up stalked by a knife-wielding maniac outside her secluded cabin, Secret Window where Johnny Depp’s character seeks out solitude in an attempt to revive his failing mental health after a divorce, or even Get Out where an interracial couple finds themselves in Stepfordian, whitewashed suburbia with a sinister edge, the prospect of being suddenly injected in a culture or climate that is not one’s comfort zone is enough to set an audience in a state of unease. 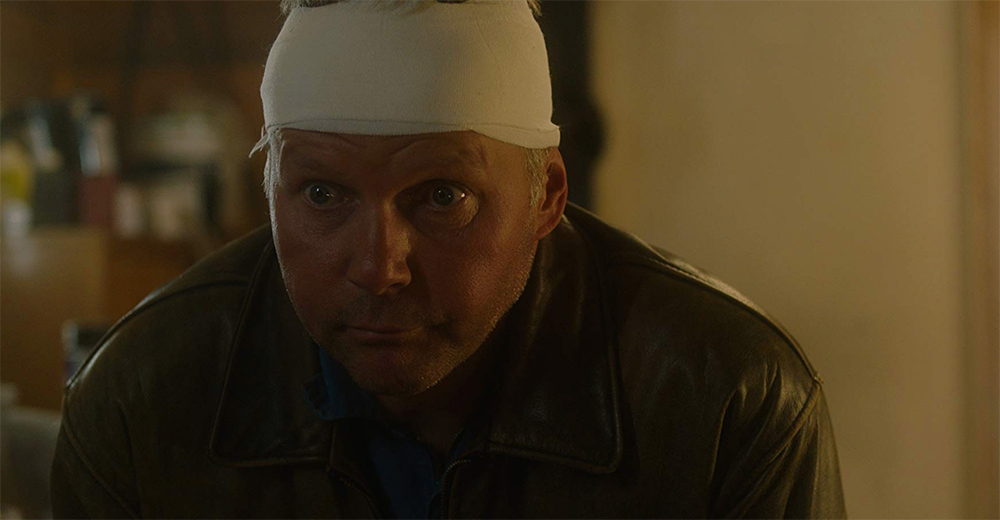 We’re first introduced to cab driver Hans Bubi (Christer Cavallius) who requests that Robin signs every one of his copies of her books while she’s in his back seat. It seems out of place, but it’s not unlike horror films to use a bit of artistic sleight of hand when building on the initial plot structure. In fact, I don’t even mind the comedic tones that settled underneath Robin’s awkward interaction with Hans.

There was a particular scene where the two of them move a couch together that made me forget I was watching a horror movie completely, and the dynamic between them came straight out of The Odd Couple.

When Robin arrives at the farm where she’s staying on her getaway, we are introduced to members of the family who run the farm, one at a time. Each “segment” of this film is marked by title screens such as “The Writer” to introduce key characters and aspects of the plot. 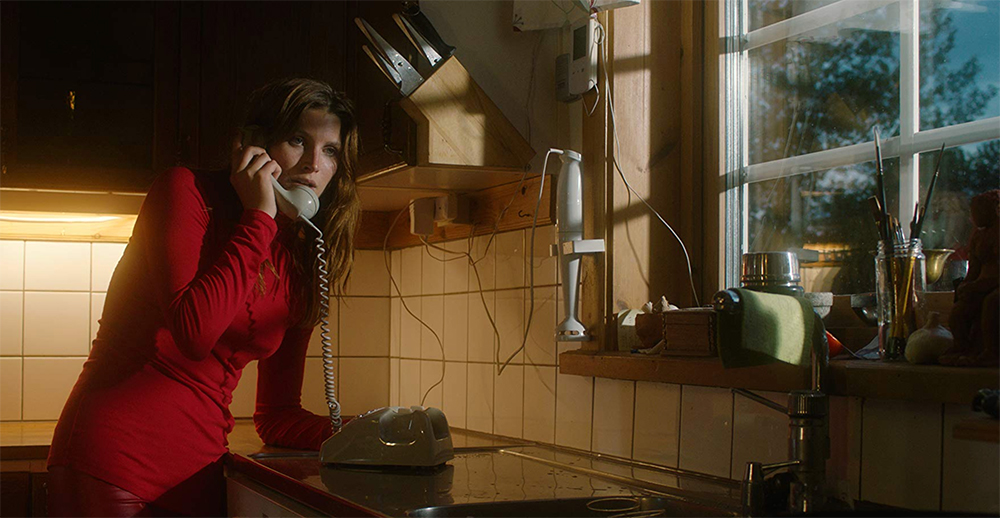 The film is almost stylized like a play, where each new sequence adds another layer of increasingly dramatic proportions.

Robin is welcomed by the farmer and owner of the property, Rolf (Rolf Brunnström), a quiet man who is the literal embodiment of the strong, silent type. He helps her get acclimated to her quaint little farmhouse, sharing information about the property and that he’s recently lost his wife. Much of the build-up leaves the audience questioning how much of the goings-on are Robin being a city dweller and looking down on simpler, country folk and how much might be genuinely sinister.

Her attempts to explore the property are punctuated by a strange man who seems to be constantly watching her and surveilling her every move and an adult woman who seems primarily interested in braiding a doll’s hair.

Robin’s clothes begin to go missing. And her fruitless attempts at beginning her new novel divert her interest toward what Rolf might be up to in a shed where he plays loud music and has taped up all the windows with plastic — much like the titular character in Dexter setting up one of his infamous kill rooms.

As the film spirals toward its second half, we realize that Robin’s welcome there might have a sooner expiration date than the writer originally intended.

As with many stories from Artsploitation Films, Blood Paradise is meant to be more of an “arthouse” thriller. 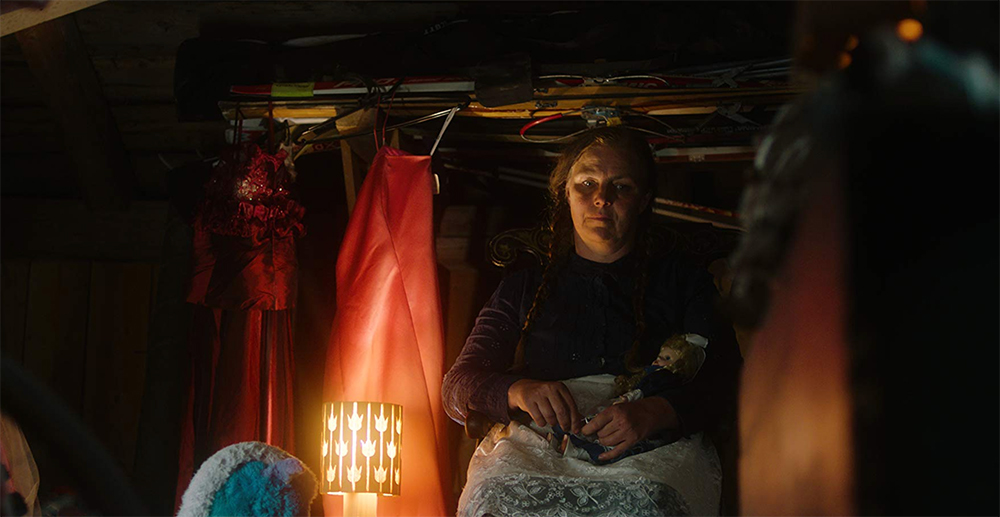 It’s a cerebral piece of modern cinema that feels more in league with exploitation films of the ‘70s and ‘80s than big-budget horror of this decade.

For me, the twists and turns were predictable and more hilarious than they were alarming. The roles were played straight by the cast, and not overacted as much as they were presenting stark caricatures of traditional roles in these types of films: the prissy “city girl”, the Peeping Tom hillbilly, the menacing farmer, and an overly jealous woman who is convinced her significant other (Hans, the cab driver) was cheating on her with Robin after one encounter.

If there’s one thing the film does really well, it’s the delivery of comedic timing in unexpected moments that are likely meant to come across as more insidious. But I believe there’s joy to be found in a good horror-comedy, even if that wasn’t the director’s initial intention.

If you enjoy the feeling of a classic noir mystery that’s simmered with Hitchcockian suspense and backwoods comedy tropes, you’ll certainly enjoy this film.

It has the heartbeat of an exploitation film, with full nudity and unapologetic violence throughout. But I wasn’t able to take it too seriously, much like with “B-movies” and grindhouse films.

Cinematically, it is a pretty picture: the setting alone provides a natural, breathtaking view of nature at its most pristine. However, the sound mixing and Foley work was a bit garbled and unbalanced at times, which could have easily been an artistic choice to lessen and dampen sound to add to the director’s clear desire to make the film feel like a mystery as Robin explores her new surroundings. 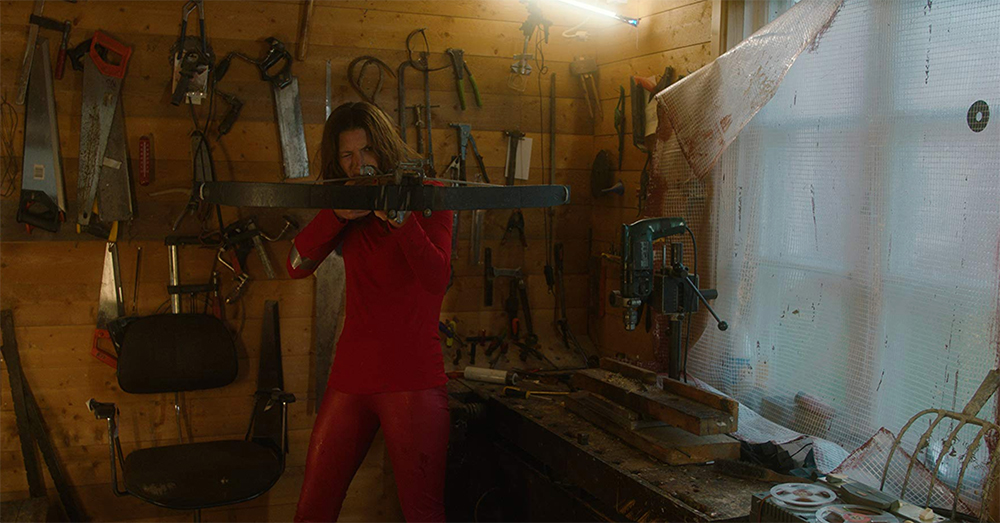 Andréa Winter is a standout in her role as Robin.

She carries the majority of her film on her more than capable shoulders, no small feat given her production credits for this film as well.

The novelty feel of BLOOD PARADISE will appeal to audiences who appreciate a slow burn thriller steeped within one’s fear of unfamiliarity and the sinister that can lurk within the mundane; this film has a lot of fun at its own expense, and adds a unique quirkiness to the horror genre.

Blood Paradise is available to rent through Amazon and other streaming platforms and can be purchased on Blu-Ray or DVD. Check it out on Artsploitation Films website.