A love letter to extreme horror and the fans who embrace it, “More Blood!” offers an insightful look at why many are drawn to onscreen gore and bloodshed. 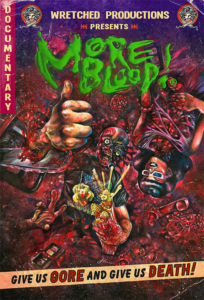 There are horror fans who enjoy a good scare, a little shock and titillation, perhaps some great suspense and a creepy atmosphere. There are those who enjoy the mounting tension, the jump scares that get the heart racing and the blood pumping, and maybe even the psychological torment.

Then there are those horror fans who need a little more — more extreme violence, more over-the-top gore…and More Blood!

For horror fans like myself, we love all kinds of horror. But we really crave that boundary pushing, “I can’t believe I’m watching this” kind of horror that puts us in a rare class. There’s a special thrill that comes from watching the films so many others won’t go near…the kind of films many people simply can’t make it through.

While horror itself has become increasingly mainstream — popularized through shows like The Walking Dead and American Horror Story and, in some cases, elevated to the status of “respectable” art with Oscar award-winning films such as Get Out and The Shape of Water — extreme horror still remains on the fringe of society. These are the films that separate the casual connoisseur of genre fare from the hardcore horror fanatic.

As a member of the latter camp, I’m used to feeling odd, disturbed, even twisted for my proclivity for the darker side of the genre. As a woman who happens to love shockingly violent and ultra gory films, I’m even more unusual by mainstream standards. That’s why it was so refreshing to see another woman, the incredibly talented and visionary indie filmmaker Heidi Moore (Dolly Deadly), explore the nature of this desire for more explicit and brutal content.

As fans of extreme horror, are we broken? Is something fundamentally wrong with us? Or is there something more innately human — and perhaps even healthy — about seeking out such disturbing and controversial cinema.

In the documentary More Blood!, Moore speaks to numerous filmmakers, writers, podcasters, and performers — including Lloyd Kaufman (Troma Entertainment), April Burril (Chainsaw Sally), and Cassandra Sechler (Eliot) — about their love for extreme horror and what they believe drives this desire for more death and gore.

Interspersed with clips from many of my favorite films, Moore’s interview subjects reveal some smart and though provoking reasons so many of us seem to gravitate towards the “sick” stuff. It’s truly eye opening for those of us who have long enjoyed the seedy underbelly of horror, mostly in isolation.

More Blood! is a fascinating and in-depth exploration of a subject few ever discuss, offering a wide range of perspectives on what drives gore hounds and extreme horror enthusiasts.

For some, watching these types of films is therapeutic — a way to safely confront our innate fear of death, or to channel our natural aggressions in a healthy way, or even to ease our own suffering by watching others who are much worse off than we will likely ever be. For others, it’s about challenging ourselves to go beyond the thresh hold of what we think we can tolerate — a mental exercise that tests our stamina and strength to endure the almost unendurable, perhaps making us better prepared to handle the real life horror we’re often faced with.

In many ways, extreme horror is like a drug. We’re so desensitized these days, and many of us feel like we’ve seen it all. We’re constantly looking for something to take our horror high to the next level. We crave something to give us that adrenaline rush we got when we first fell in love with horror, the joy we felt when we were young and everything was so new and exciting.

Many fans of gore just truly appreciate the artistry involved, admiring the skill involved in creating such brutally realistic scenes capable of turning our stomachs and sending chills up our spine. There’s a great deal of respect, especially among filmmakers and SFX fans, for the shocking yet strangely beautiful work of auteurs like Stephen Biro and Marcus Koch on the American Guinea Pig series. Beyond the visceral reaction their craft has on audiences, there is an enormous amount of talent and creativity behind those scenes of depravity that is more than worthy of recognition.

One of my favorite quotes from the interviewees was from Jason Thompson of Bad Seed FX. He explains, “I’m not into gore that’s exploitative. Gore for the sake of gore. But I really do like seeing it treated the same way that a painter would treat red paint.” The appreciation for film as true art — even the kinds of films others are so quick to dismiss as trash — is what moved me most about this excellent documentary.

To hear from others who have the same reverence for, and so eloquently articulate the value of, these often reviled and maligned films is an absolute joy.

The topic is handled with tremendous respect and reverence. This is a film by horror fans for horror fans. There are no interviews with psychologists or scholars. Instead, we get a purely personal look at what makes fans of these films tick. It’s honest, intelligent, and deeply penetrating of so many stereotypes and misconceptions about those who seek out and enjoy uncensored, onscreen carnage and gore.

Whether you’re a die hard fan of shocking cinema and want to hear from others who truly “get” you — or you simply want to know how fans of films like Nekromantic, A Serbian Film, Bloodshock, and Hostel think — I highly recommend you give More Blood! a watch.

Beginning May 1st, More Blood! will be available to order on DVD via Amazon or to stream online via OSI 74.