“Braid” is a dreamy, brutal, wholly feminine tale of childhood nostalgia, friendship, and the dangers of retreating too far into our own imaginations. 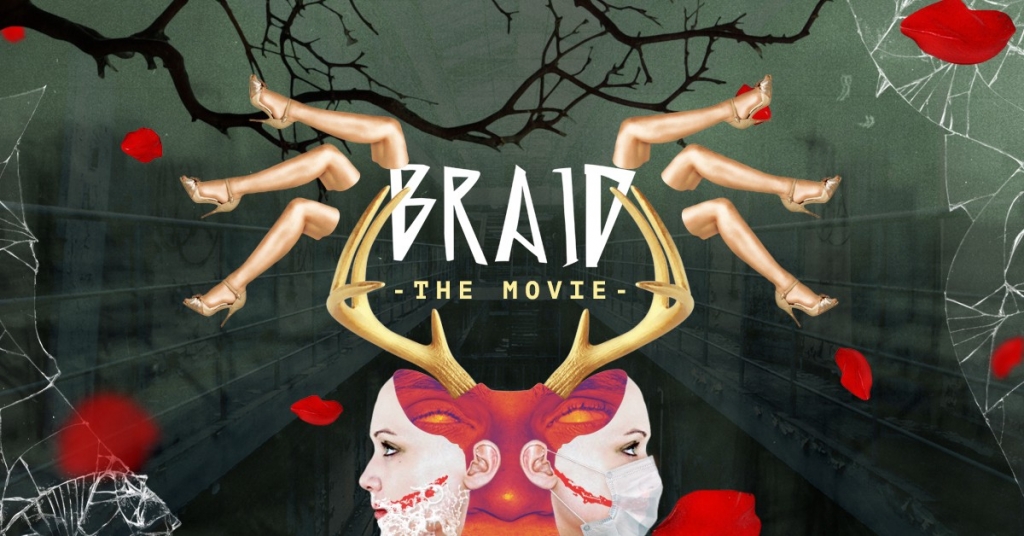 The bonds that young girls forge at the height of childhood innocence, when the world seems full of wonderful possibilities and you truly believe you will be friends forever because you swore it on a pinky promise, are some of the strongest that we will ever experience.

On playgrounds and at sleepovers, we created a world of our own, whose only limits were that of our boundless imagination. This happens long before we learned that the real world, the one we would one day be forced to face, is often cruel and unforgiving. It’s no wonder that so many of us spend adulthood surrounding ourselves with pleasant reminders of our youth.

But the question is: was it really as good as we remember? Or, consumed by nostalgia, have we idealized what we perceive to have been a simpler time?

Braid is a story of nostalgia gone awry. It’s a cautionary tale about what happens if we retreat too far into childlike flights of fancy.

When I first saw the trailer for this film a couple of months ago, I was immediately determined to love it. It seemed to cater to at least half of my interests: a focus on relationships between women, smatterings of bloody violence (of which said women are not merely victims but perpetrators), and soft feminine aesthetics that beguile a darkness underneath.

After two viewings I’m even more certain that director Mitzi Peirone and I have some kind of cosmic connection — despite, you know, having never met — and that she crafted her debut feature with my personal tastes in mind.

In all seriousness, Braid is a hell of a ride and, failing mainstream attention, it at least deserves eventual cult status.

The film focuses on three women: Petula, Tilda, and Daphne. Once inseparable childhood companions, their paths splintered into two very different directions due to a traumatic experience. Petula and Tilda are jaded millennials who have taken to drug dealing in search of excitement and prosperity — an alternative to the bleak world of student loans, dead-end jobs, and failed ambitions.

When they barely escape a raid and lose their stash, they hatch a plan to get the cash to pay back their supplier and disappear from the police on their tails. So they pay a visit to their old friend, Daphne.

Daphne lives alone in her family’s decaying Gilded Age mansion, unable to move beyond the games of make-believe that occupied her once happy childhood. In order for Petula and Tilda to gain entrance to Daphne’s fortress — and find the safe containing her inheritance, more than enough to make up their losses — they must play along with her game and abide by her rules.

The pair soon finds that they are in over their heads and, as the game advances, they (and the viewer) are soon unable to tell who is really in control and what is real, what is a drug-induced hallucination, and what is a product of Daphne’s dream world.

(Daphne’s deranged “Mother” persona exhibits a maternal style that Mrs. Bates could be proud of.)

With a side order of David Lynch, Peirone takes her viewers down a brightly colored rabbit hole that will leave you wondering what is real and what is not. If you like your stories to be tied into a neat bow, with every detail explained and nothing left to individual viewer interpretation, Braid isn’t going to be your cup of tea. For a narrative that exists to intentionally distort the lines between reality and make-believe, I would have been disappointed if the ending didn’t leave plenty to the imagination.

My only criticism of the film is that it doesn’t start strong. At first, the acting feels stilted, the narrative tries a little too hard to prove that Tilda and Petula are ‘bad girls’. And the characters needlessly repeat the rules of the game. But once Petula and Tilda are fully entrenched inside Daphne’s realm, Peirone hits her stride.

It’s when everything starts spiraling out of control, when the game gets underway in earnest, that the film and the players really come into their own. 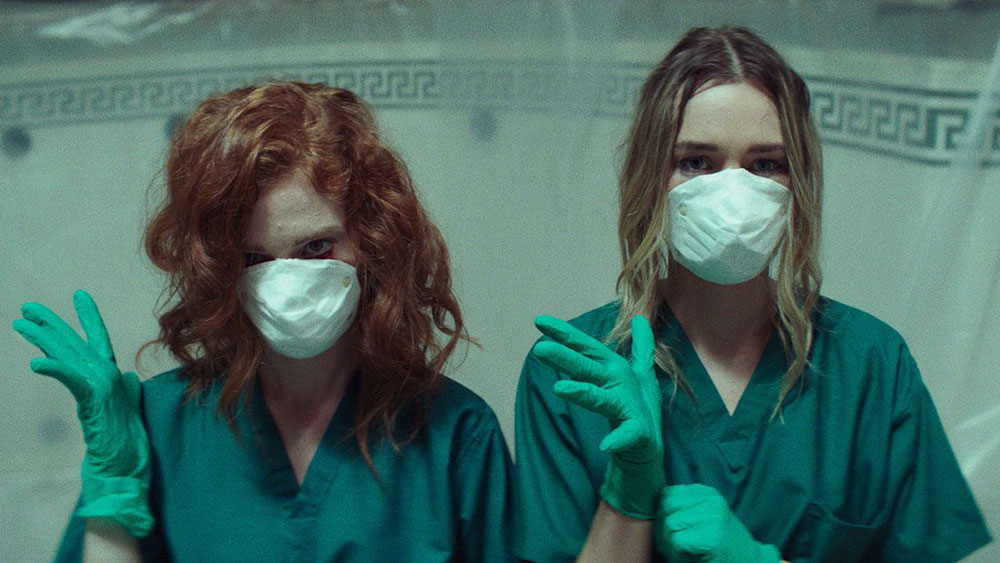 Through this childhood game, Braid creates a uniquely feminine world where men are unnecessary and indeed unwelcome. Rule No. 2 reads, “no outsiders allowed,” but it might as well say, “no boys allowed.” The sole masculine presence allowed in the game is in the role of “Doctor,” which is played by Petula. In this, much like the boundaries between reality and fantasy are blurred, so too are the lines between male and female.

Petula fulfils her “masculine” role with ease. (There could certainly be room for her to be read as trans, but it’s not my place, as a cis woman, to speculate on the nuances of the idea.)

Beyond the acting and storytelling, each piece that builds BRAID’s puzzle — from the color schemes to the music to the costumes — is chosen with deliberate skill. Part of what makes this wild ride so thoroughly intoxicating is the ever-changing colors and roller coaster camera work. The camera turns upside down and sideways, the palette alternates between soft pastels and vibrant neons, all of which serve to disorient both the viewer and the characters as they struggle to keep their grip on reality. 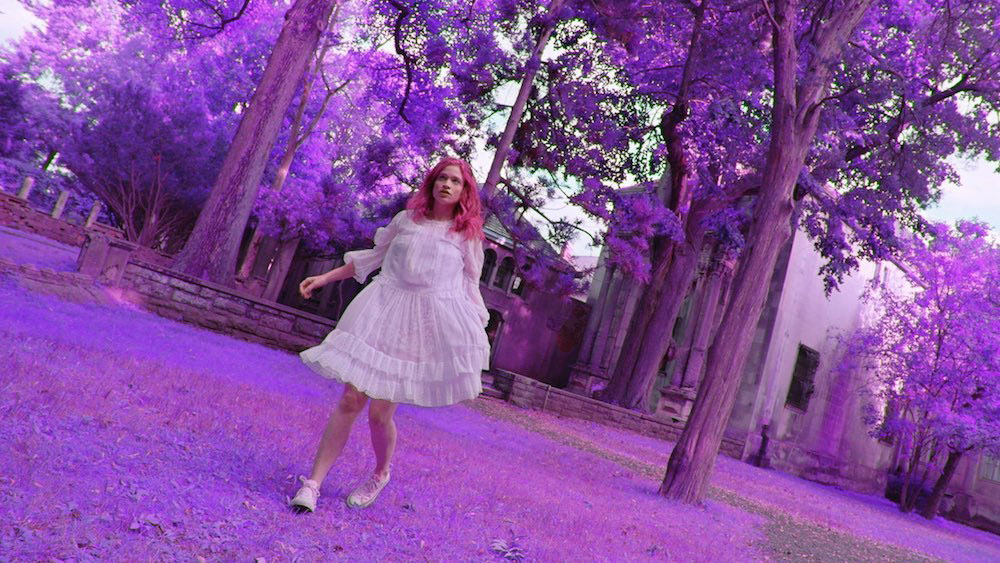 The use of opera music against depictions of violence is stirring. The pinnacle of this combination comes when the melancholy “Dido’s Lament” accompanies the film’s most gruesome scene, particularly jarring as, up to this point, blood and violence have been utilized only minimally.

But perhaps the most interesting piece is the vintage aesthetic surrounding Daphne and her sprawling home. She seems stuck in time, certainly, but not just her time. She dresses like an upper class 1950’s housewife, in her tailored dresses and silk robes. Her car, her appliances, her decor — everything belongs to the 50s, a decade that many idealize as a “simpler time.”

This period of harsh divides between gender and race, and the ever-present fear of nuclear warfare was anything but simple. That, it would seem, is the point Peirone is trying to make. Nostalgia distorts our judgement; we often look at the past through rose-tinted glasses, shutting out its unpleasant aspects and creating something entirely new, something that never truly existed at all.