“The Cleaning Lady” is a terrifying, highly affecting and disturbing study of cruelty, obsession and the trauma that can drive a human to insanity.

In this stunning psychological thriller, sympathy and loneliness leads a woman to make a mistake she will regret for the rest of her life. They say beauty is only skin deep. But the scars from trauma run much, much deeper.

The assumption, when we see people that are considered beautiful and successful, is that they are happy. If someone seems like they have it all, it’s not fair to believe that everything is perfect. In Jon Knautz’s film The Cleaning Lady, we meet two women from completely different worlds. Alice is the one we would perceive as the lucky one. But no matter what she has in material things, she is sadly in love with a married man.

Needing someone to talk to, Alice’s new cleaning lady Shelly, a scarred and damaged young woman, becomes her confidant. Obsessed with her new employer and wanting her to be cleansed, Shelly goes over the top to perfect Alice, permanently.

The Cleaning Lady is one of the most chilling stories I have seen so far this year. 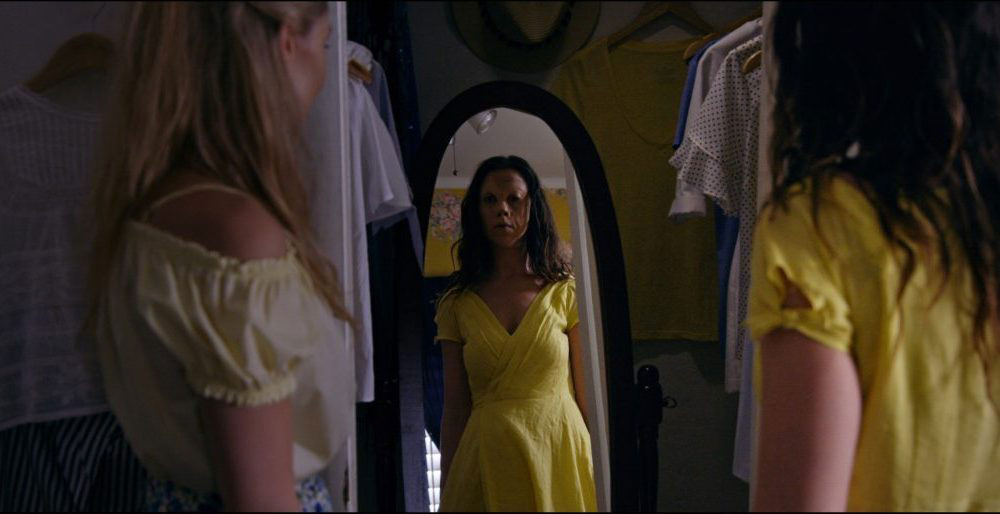 I was left shaken and full of moral dilemmas by the final moments of the film. As a woman, it gave me so many different things to ponder, long after the credits rolled. This film asked so many deep questions about the way we treat other people, how we treat ourselves and most importantly how we look at people who are different than us.

Just because we think we are being “nice” to someone who we perceive as damaged doesn’t mean we understand them. And in this case, we probably shouldn’t invite them into our lives.

The film begins with a stomach-churning moment that gives us insight into a character we will eventually come to know well. 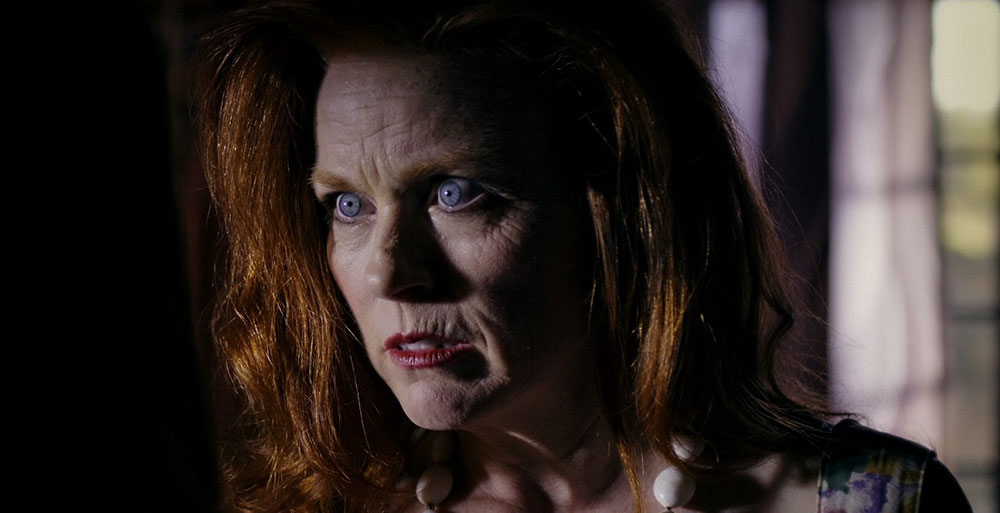 Enough horror for the moment. From there we move to meeting Alice. Alexis Kendra plays her brilliantly. She also co-wrote the film with director Jon Knautz.

Alice is a woman who on the outside seems to have everything. A successful beauty business, lovely furniture in a beautiful apartment, and a doting boyfriend. Unfortunately, that boyfriend is married. Alice is in love and can’t seem to break it off, no matter how many sexaholics anonymous meetings she goes to.

When Alice sees Shelly (Rachel Alig), she feels sorry for her. But she is attracted to the idea of having a quiet, seemingly harmless young girl clean her apartment and maybe be a friend. I’m sure she thought she was doing the right thing by befriending the facially scarred and shy girl. But not knowing what happened to her prior to this becomes a critical mistake.

Alice asks her to stay for dinner. She waits for Shelly to tell her about the scars, never asking.

Alice then proceeds to give Shelly some lessons on makeup — unknowingly insinuating that Shelly would be more attractive if the scars were covered up by a mask. Alice seems to have the best of intentions, but her thoughtless act is a cruelty, nonetheless. She also has no idea that Shelly has an agenda of her own and wants to help “fix” Alice and make her perfect in her own twisted way.

The horrible backstory of Shelly’s childhood reveals itself in bits and pieces.

The heartbreaking tragedy of the cruelties a mother could bestow on her daughter are almost too dreadful to comprehend. This is the mother of all toxic relationships, and we hurt for Shelly. The shot of her looking through her dollhouse window at a Barbie is so telling as to where her mind is when she meets the beautiful, blonde Alice. When she tells her, “You look like Barbie,” we know Alice is in big trouble.

The characters of Alice and Shelly are such a great study of women and friendship. We all look for people who are like us to be friends with. These two seem so completely different, but are they really? They are both complex and damaged souls. We see how deeply injured Shelly is and it allows us to feel sympathy for her, despite her atrocious acts. As an audience, it is hard to decide whose side to be on.

There are many reasons to love this film.

The cinematography is at some points bright and sunny at Alice’s house. Other times, it is gloomy and filled with shadows where Shelly lives, perfectly matching their characters. My imagination filled the dark spaces with even more awful things than what I could see. The writing was incredible, full of ironies and very believable. Each character had depth, dimension and imperfections, so that we are torn as to who we hate more.

The acting was perfect! I loved the grim and chilling performance from Rachel Alig as Shelly and MyKayla Sohn as an equally pathetic young Shelly. Additionally, Alexis Kendra’s multi-layered and imperfect Alice, and JoAnn McGrath as Shelly’s monster of a mother Colleen (her eyes, OMG, her eyes are incredible) all make this a film you shouldn’t miss.

This is a film dominated by women, and I love it!

There are many moments in The Cleaning Lady that are not for the faint of heart. 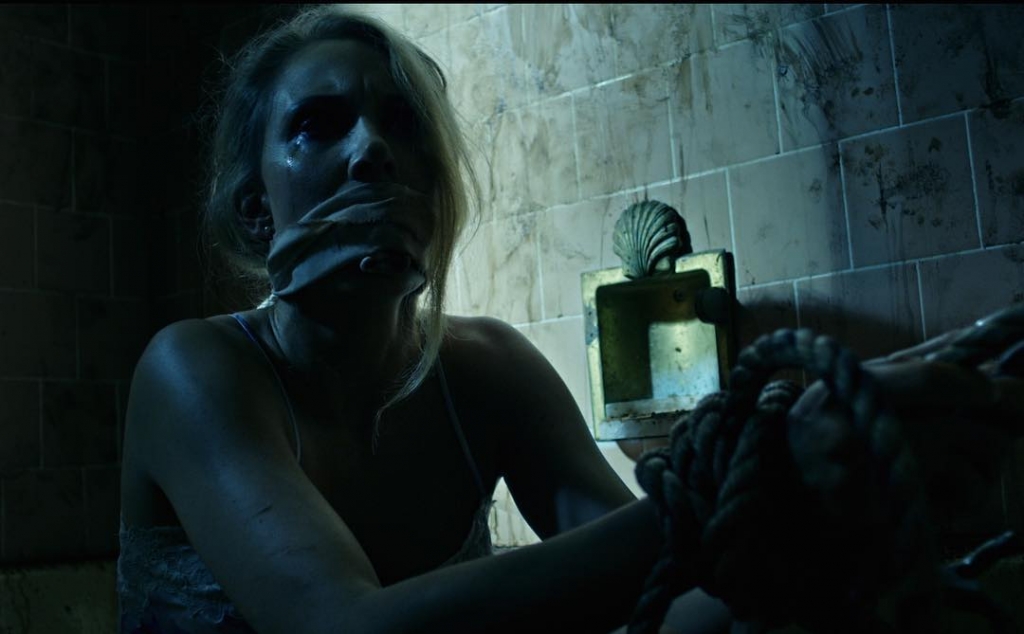 The SFX people had some work to do in this film! Thankfully, there was not a bunch of jump scares. Instead, it’s the kind of slow scares that leave you breathless, keeping you engaged, yet wondering when it will be over.

The final scene left me with some questions, and I would have loved there to be a little more to answer these thoughts. But it in no way ruined it for me. The Cleaning Lady is a terrific character study and a film I could watch over and over to probably see things I missed.

(Small spoiler alert: Animal lovers may want to skip the first few moments. It is important to the film but could be skipped. It’s just strawberry jam in the blender, really.)

The Cleaning Lady is available On Demand, Digital HD, and DVD on June 4th, 2019, from RLJE Films