Extremely funny, engaging, and well-acted, “Gatlopp: Hell of a Game” is a horror-comedy that happens to be a hell of a good time. 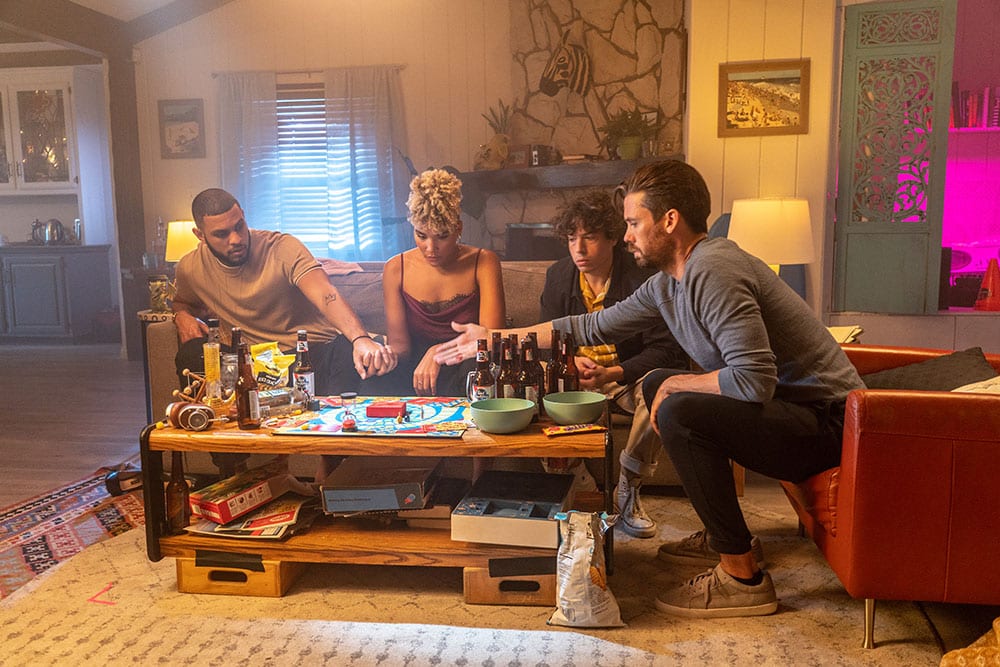 All Photos Courtesy of XYZ Films

Horror and comedy have always been a winning combination because face it, we like to laugh when people suffer in amusing ways. When clashing personalities and egos are involved, it’s even funnier. Make them estranged best friends with a history who must depend on each other to survive the night, and you have Gatlopp: Hell Of A Game.

The film opens with a little old lady, yelling at her neighbors for partying too loud. When she gets fed up and goes to tell them off, she hears screaming on the other side of the door, which then opens to a trashed and empty apartment — except for an innocent-looking little game lying in the middle of the floor.

This leads to one of the most interesting opening credits sequences that I have seen in a while, and I generally dislike them, because it just delays the start of the film.

It’s been 10 years since our four friends have hung out together.

Paul (Jim Mahoney) is moving back into his friend Cliff’s (Jon Bass) house to wait for money from the sale of his house. Cliff snagged a futon and a credenza from a thrift store so Paul would have a place to sleep and put his stuff. While Paul is depressed as a result of his recent divorce, Cliff just wants to have a good time with the old gang — to have things back the way they used to be.

Thus, Cliff invites over the other half of their old friend group: Samantha, (Emmy Raver-Lampman), a busy TV exec who never had time to settle down, and Troy, (Sarunas J. Jackson), an actor and aspiring nightclub owner.

Finding an innocent-looking old game in amongst the furniture, Cliff suggests the friends play it. 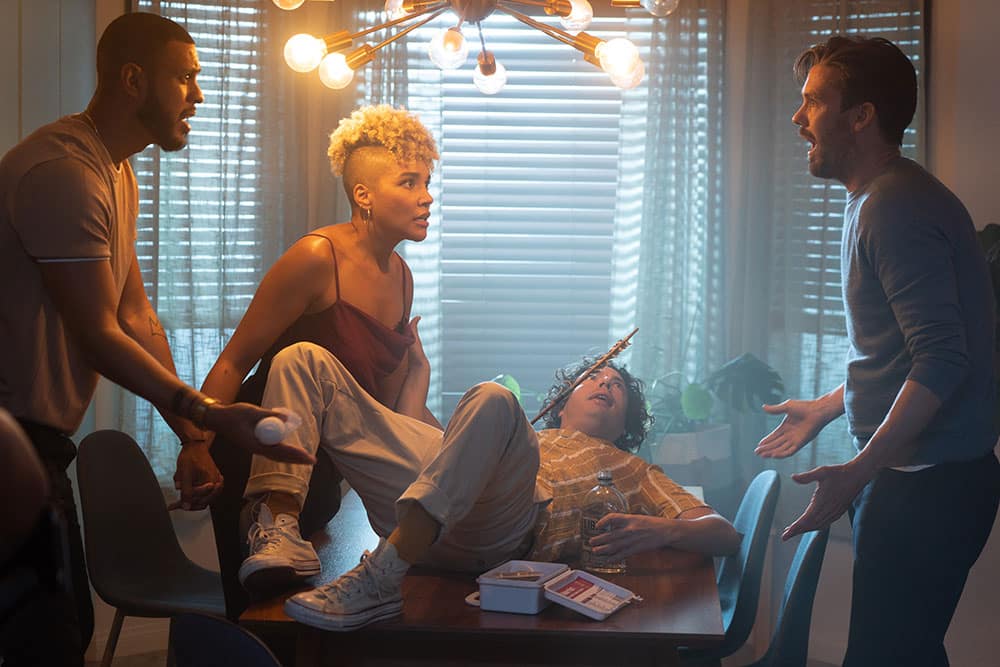 At first, no one is interested. But in order to cheer up Paul, some alcohol is needed. And since the game requires drinking, it seems the perfect way to get their minds off their troubles.

Sam starts reading the rules, but Cliff, in his excitement, just grabs the box and says they can learn as they go along. This turns out to be a serious mistake. Always read the rules, people!!

In their haste, they missed the most important part of the directions: one of them must win before sunrise or they will be playing the game for all of eternity — in hell!

Gatlopp it turns out is, literally, a killer board game.

If you are wondering what the title means, Gatlopp is the Swedish word for running the gauntlet, a type of punishment where the guilty person runs between a line of armed folks who hit them as they go by, with whatever weapon they have in hand. In this case, the friends start playing, completely unaware that they are in danger. I mean, the game comes with 4 shot glasses. What could be so bad about that?

The game asks for absolute truth, or the consequences will be dire.

The obviously supernatural game knows all their greatest fears and proves to them over and over, that it’s life-or-death every time they roll the dice. 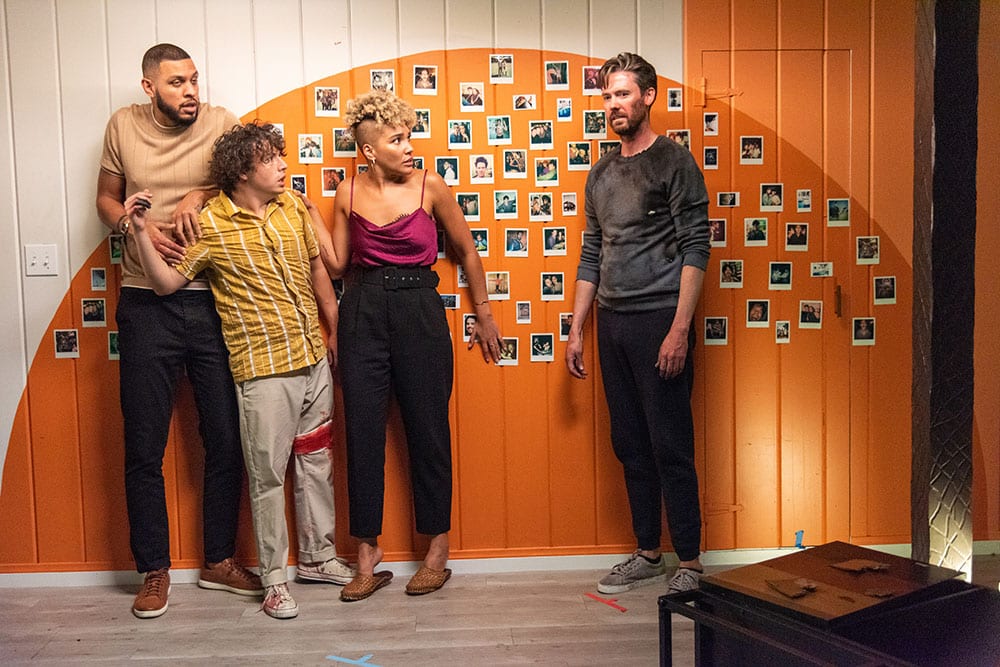 They must tell the truth and cannot cheat or skip a turn. If they work as a team, there is a chance they can win. But they need to hurry; it will be sunrise soon!

With Jim Mahoney’s script, aided by Alberto Belli’s direction, this entertaining dark comedy takes your standard “a group of friends get together, play games and drink” horror trope, twists it around, and makes it work on so many levels.

Imagine Jumanji if it were a drinking game where you cannot lie, and you have Gatlopp! It is the quintessential survival comedy for today’s horror fans.

Has game night horror been done before? Of course. Jumanji started it, but movies like Escape Room, Open Graves, and Into the Dark’s Uncanny Annie, did it well, too. So, why do I like this one so much?

There were so many moments of pure macabre fun!

The pacing was quick, the stakes high, and the punishments unpredictable. From having to do a Jazzercise routine to body-swapping, to people popping in and out of hell, I was constantly surprised!

And the cast was so perfectly matched. Emmy Raver-Lampman from The Umbrella Academy is a favorite of mine already. And the others: Well, the acting was amazing across the board.

Gatlopp made me laugh out loud so many times. 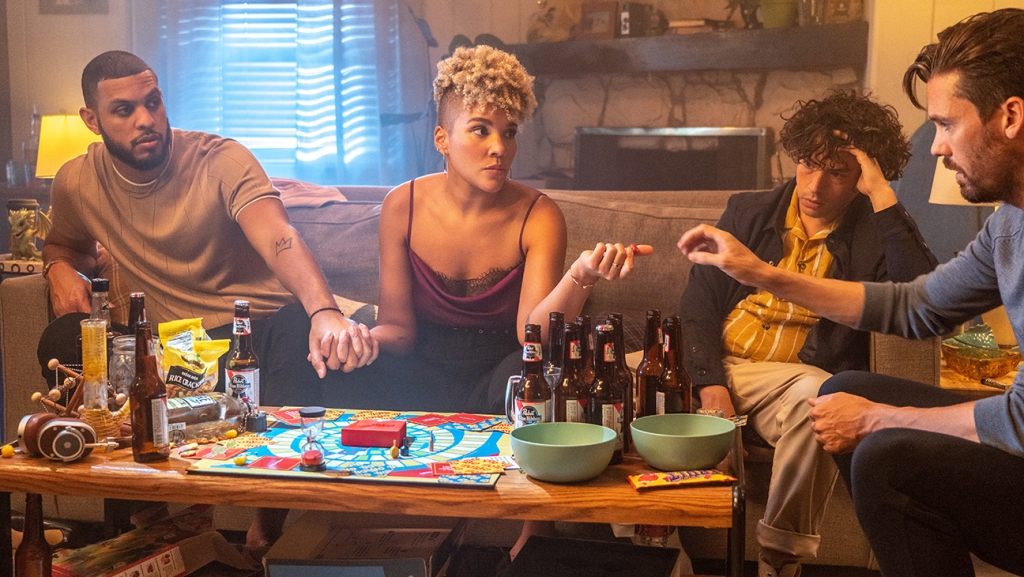 With the world being in the state it’s in, this film offered a much-needed respite.

The friend group was believable, and I needed them to be close again. I couldn’t help but want them all to survive. The importance of friendship is the bottom line here — and realizing you should take nothing in your life for granted.

Gatlopp would make a great film to watch with your good friends, and, if you are so inclined, have an adult beverage or two.

XYZ Films will release the supernatural comedy GATLOPP: HELL OF A GAME on Demand and Digital on June 23, 2022.