“Master” is the kind of film that is needed to uniquely communicate the abject horror of the Black experience within academic spaces.

Diallo explores a space where racist microaggressions and harassment still thrive: university settings. Most people pretend that higher education is this wonderful and enlightened bastion of hope, truth, and equity. Like any and all systems, however, that is far from the truth.

Anyone in academia will tell you that at some point in their schooling career they have seen evidence of the uncomfortably nasty aggression that is portrayed in Master. There are times when it is even openly condoned in classroom spaces. Diallo uses the creeping emotional gravity of her film to discuss a much-needed real-world issue that should be readily brought to light.

Before getting to the heavy analytical part of this piece, it seems important to address something that has become sort of a trend among reviewers while watching this film: the over-encompassing need to compare the film to Jordan Peele’s Get Out and decry it for not living up to that standard for them, as if it’s the film’s fault the reviewer had deeply preconceived notions.

The world allows for both types of narratives because they are both vital when interrogating different areas of racism via horror.

It smacks of — possibly unintended or at least unrealized — misogyny. Using a man’s film as a cudgel against a woman’s is dubious at best on the surface, but it’s truly harmful when looking at the situation from an intersectional standpoint. Diallo has a right to tell her story on her terms and in her own way without having to measure up to a previous film made by a man.

Both Peele and Diallo are gifted storytellers, but the experiences in Master are specifically from the lens of a Black woman whose point of view is desperately needed in horror and at large.

Diallo doesn’t need to be Jordan Peele because she is Mariama Diallo, and that is beautiful. GET OUT and MASTER have the right to exist in conversation with each other, covering different areas of the Black experience, without being used as a means to demean the other.

While Gail is settling into her role as Master at the school, freshman Jasmine Moore (Zoe Renee) is struggling to fit in with her overwhelmingly white peers.

Both Gail and Jasmine learn that the school is not as progressive as it posits itself to be. They are haunted by the school’s racist past where a young Black girl, a victim of racially motivated bullying, committed suicide in the dorms. School lore and racist microaggressions prove to create a heady and disturbing atmosphere.

Academia is supposed to stand for knowledge and acceptance. That’s the ideal but is not always the reality. Insidious social systems infiltrate all areas of life, much like folklore is woven into our society’s culture.

If this film makes you uncomfortable, good. It should.

For too long, academia has hinged itself on whiteness and colonialist paradigms. There is a much-needed movement to decolonize academic thought and spaces, but of course, there is push back to this. Professors still cling to their all-white syllabi and flawed rhetoric like it truly reflects the world we live in.

Most students at some point in their academic career — for this writer, it was in grad school — will witness thinly-veiled microaggressions. It can be as simple as literature classes with overwhelmingly white syllabi, where the professor subtly decries Black authors using African American Vernacular English in their writing. How come they never keep this energy for William Faulkner when he uses a Southern dialect in his works?

We know the answer. We see the discrepancies.

Master shows that in society, these instances are part of our academic culture; they are accepted, and that is its own horror. Jasmine’s arc is sadly indicative of a lot of young Black women’s experiences.

She is surrounded by a majority of white students who ‘other’ her. She is singled out because of her Blackness, and her presence becomes more of a threat to their lifestyles and overbearingly white paradigms. She’s stuck paying for pizza and cleaning up after her privileged peers, all the while craving deeper connection within the chaotic microcosm of collegiate life.

Jasmine’s tentative acceptance by her peers is shattered after she is kissed by her roommate Amelia’s (Talia Ryder) crush at a party. After the kiss, the hostility toward Jasmine escalates from tedious “polite society” level microaggressions to outright targeted harassment. Nooses, burning crosses, and ostracization are all lobbed at Jasmine as she attempts to cope with the stress of adjusting to college.

Jasmine’s mental health takes a toll on the young freshman, and she begins to experience hauntings, fearing that she will be taken by the witch that died on the grounds that Ancaster was built upon.

In 1965, a young Black girl named Louisa Weeks was experiencing similar racist bullying at Ancaster as the school’s first Black undergraduate student. Louisa eventually could not take any more of the abuse and ended her life by hanging herself in her dorm room, the very room that Jasmine resides in.

Louisa and Jasmine’s connected stories show that the social atmosphere of Ancaster has experienced little change.

The school heralds itself as an institution of learning and fairness, but in reality, there is still work to be done. However, the school fails to do the work. They’d instead cover up the history and leave students like Jasmine to continually suffer as Louisa did. Without intentional change, Ancaster will continue to experience cyclical horrific events brought on by the climate of institutional racism it has allowed to fester beneath the surface.

No wonder Jasmine becomes paranoid and despondent, suffering from depression.

Navigating a system that hates you and has failed you will absolutely take a toll on a person. 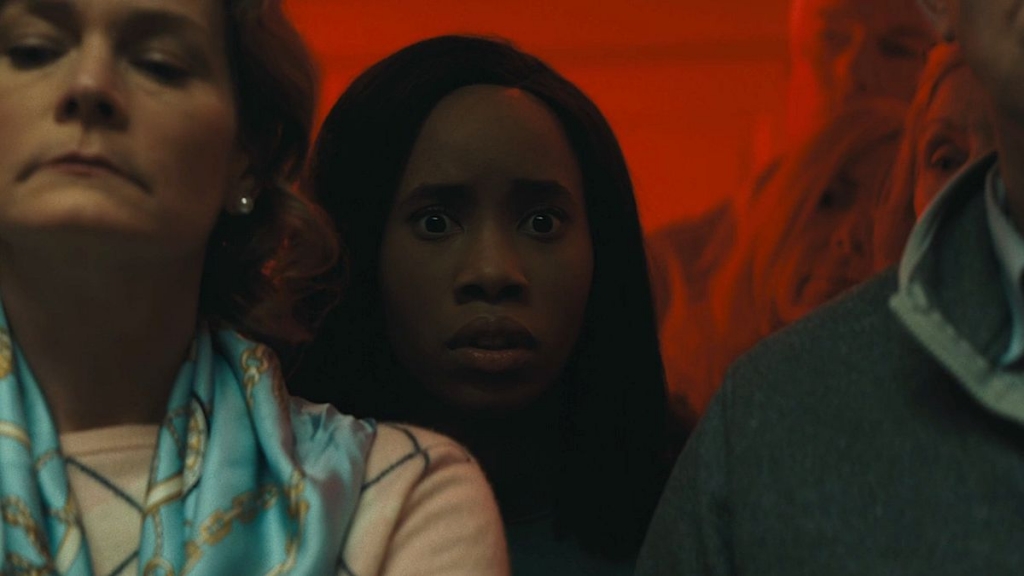 Even those that should advocate for Jasmine, such as Gail herself, fail to do so, despite their hearts being in the right place.

Jasmine’s pain is real; it’s a mirror of the ugliness that many academic institutions have knowingly let continue within their walls. Her mental struggle is uncomfortable to witness, it’s downright egregious what she experiences, but it reflects a reality that we as a society absolutely have to address and correct.

While Jasmine goes through her own painful journey of discovery and disillusionment, Gail experiences her own.

Her personal haunting leads her to a revelation about her position at the school. While settling into