In Hellraiser: Judgment, some new ideas are brought to the franchise, but it’s not enough to whet the desires of the Hellraiser fanbase. 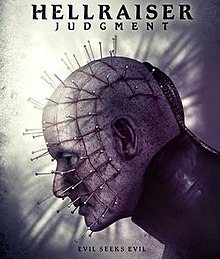 I was 17-years old when Clive Barker’s masterpiece of horror, HELLRAISER, was released onto an unsuspecting public. A group of friends went with me to see it in an older, dilapidated theater in Central New Jersey. Thinking back, that was an appropriate place – a mix of history, dust, decay, and nods to the modern. The movie is groundbreaking, and we all knew that we were watching something that we hadn’t seen before. Here was a movie that titillated, frightened, and sickened us, and we loved HELLRAISER for it.

By the time HELLBOUND: HELLRAISER II came about, Clive Barker was a household name. While still involved with the movies, Clive stepped back from the director’s chair and pulled back further from his dark creations with each sequel. By the time the fifth movie was released, there was not much left of his original Cenobite mythos aside from Pinhead and the actor who inhabited the character, Doug Bradley. 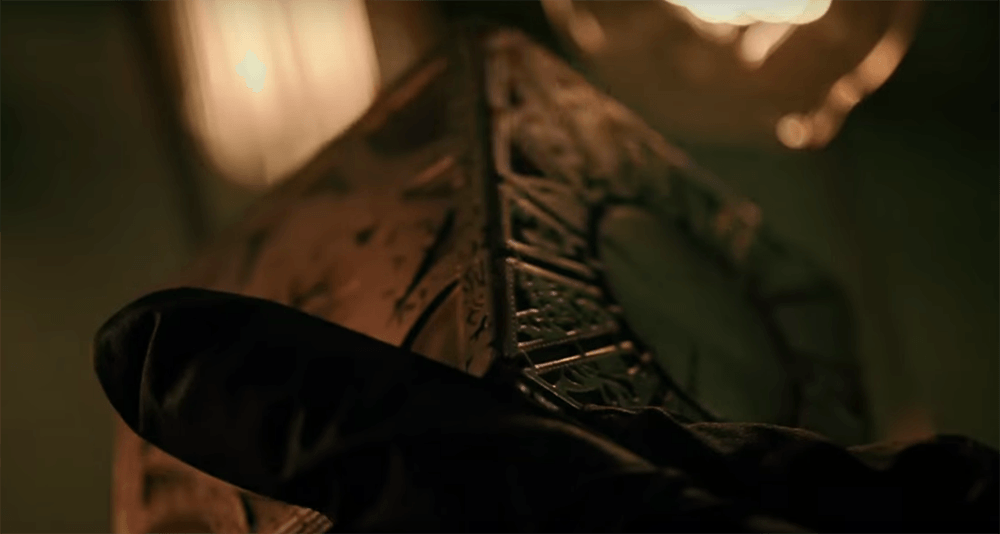 A series of Direct To Video (DTV) movies were released, horning the Cenobites and Pinhead into pre-existing scripts, usually involving police, detectives, some crime that needed punishment, or revenge. Each successive movie was worse than the prior, until HELLRAISER: REVELATIONS was released, and the storied franchise hit rock bottom. REVELATIONS was so bad, that Clive Barker felt the need to come out publicly against it. He didn’t even come out against HELLRAISER: HELLWORLD, so that gives an idea of how awful REVELATIONS, with its Mini-Me Pinhead, really is.

It’s 2018, and Dimension and Lionsgate are releasing a new entry into the series, HELLRAISER: JUDGMENT, written and directed by Gary J. Tunnicliffe, who has a long association with the series, dating back to HELLRAISER III: HELL ON EARTH.

Can Tunnicliffe, who also wrote the script for REVELATIONS, pull this franchise out of the pit and back into respectability? 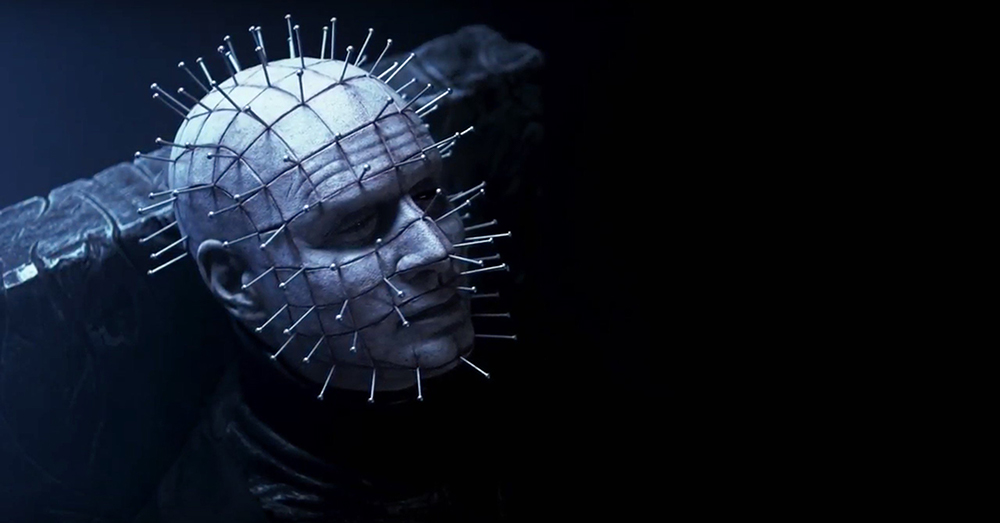 JUDGMENT begins, rather awkwardly, with a sad Pinhead (this time performed by Paul T. Taylor) lamenting that the world has moved forward technology wise, and that perhaps the Lament Configuration is now outdated. After all, who wants to spend the time to solve a music-box puzzle. Pinhead’s lackey, The Auditor (Gary J. Tunnicliffe), puts his mind at ease by stating that humans are still capable of evil despite the interwebs, and they will eventually come to them.

Speaking of coming to them, The Auditor has a man, Carl Watkins (Jeff Fenter), tied to a wheelchair in his office. This man is a child molester, and The Auditor demands that he reveal his sins as The Auditor records his deeds on a typewriter. After the sins are recorded, The Auditor leaves so that The Assessor (John Gulager) can come in and take account of the sins recorded. 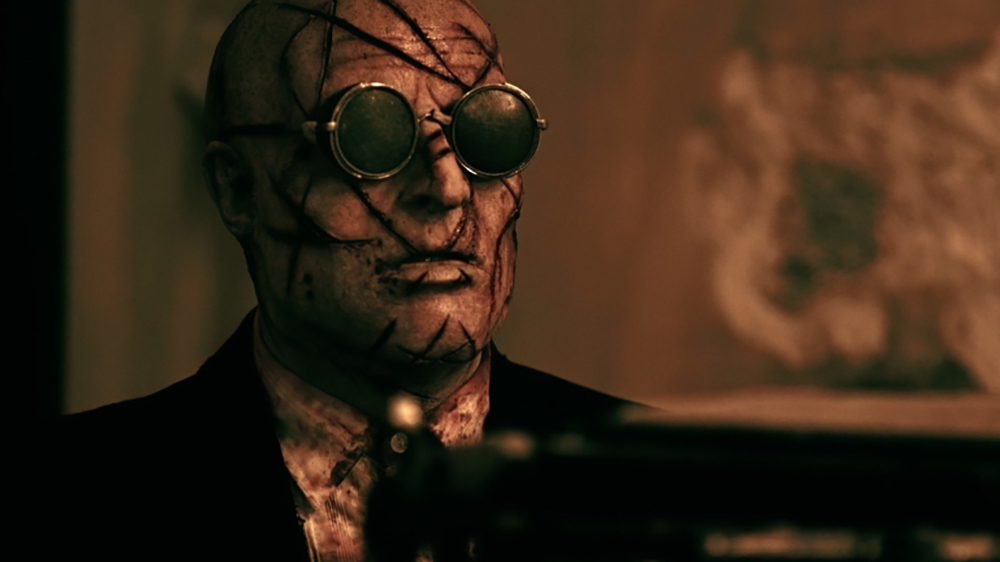 The Assessor does this by eating the typed report, then vomiting the contents into a nearby receptacle.  The vomit then goes down to a trough where three women (The Jury), naked and with the skin on their faces mostly removed, place their hands into the vomit to proclaim the verdict.

Once the verdict is rendered, the accused (for lack of a better term), Watkins, is lead to a new room and strapped to a table where he will be cleaned, inside and out.  The cleaning is done by three nude, cackling women, while The Auditor looks on. Once cleaned, a hulking thing walks into the room with a wooden baby face mask.  Out of the back jumps a leather-clad, thin being (think the Gimp) with blades in each hand. This is The Surgeon. 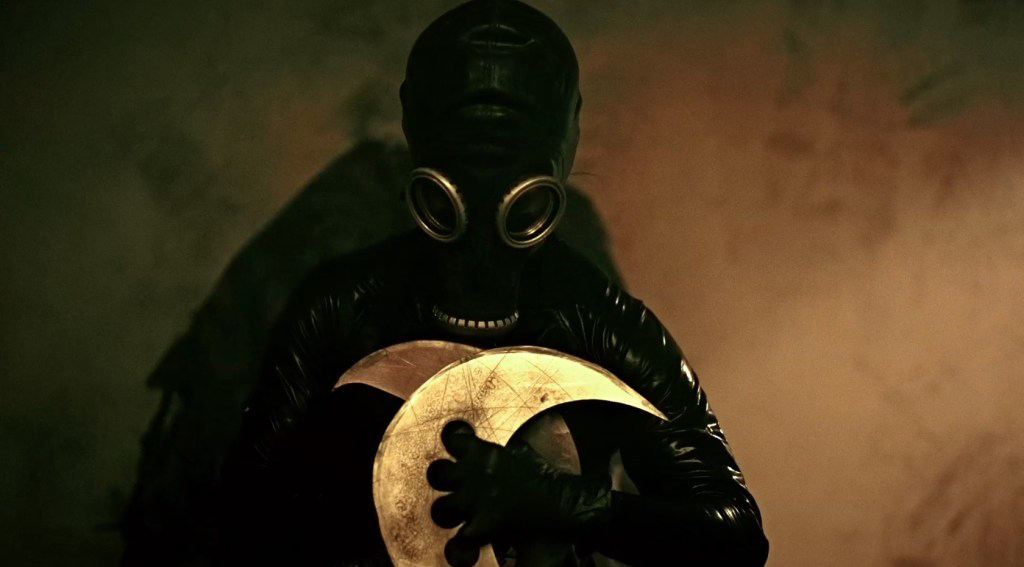 The Surgeon cuts into Watkins, and the blood funnels into pipes on the side of the table. The Jury has come into this room to kneel before the funnels and be bathed in the blood of Watkins. The Surgeon returns to the inside of the hulking baby mask thing, which is known as The Butcher, and Watkins is taken away.

The reason I went into detail is that the scene is meant to establish the new mythology of the Cenobites. In previous DTV movies, Pinhead had become more of a demon who passes judgment rather than an intra-dimensional explorer of pleasure and pain. Now that the new Cenobite mythos has been established, it’s time to get into the meat of the story. 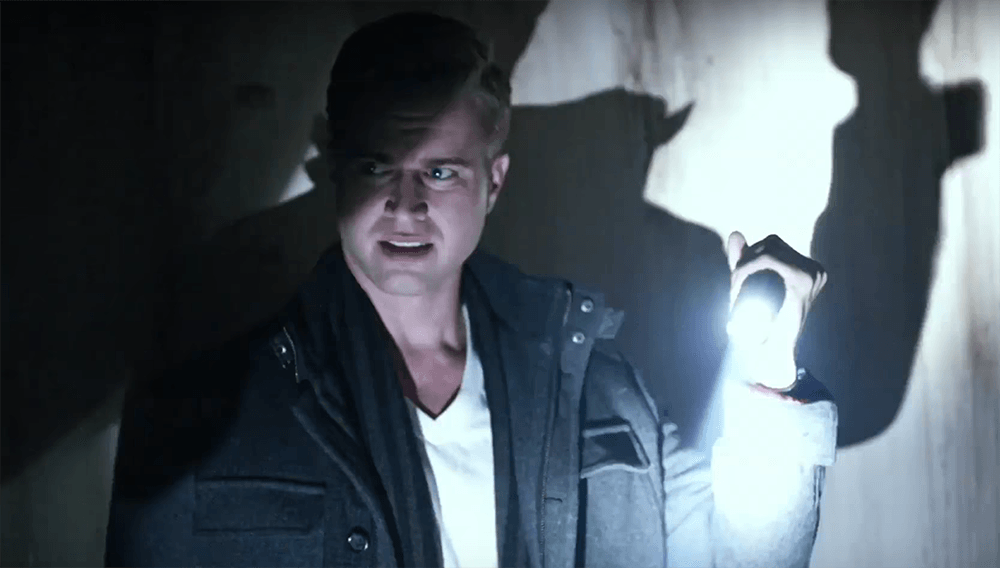 JUDGMENT, for the most part, follows three detectives on the hunt for a serial killer named The Preceptor who kills people that have been found to be in violation of one of the Ten Commandments. Sounds like a familiar premise, does it not?  The detectives assigned to the case are brothers Sean Carter (Damon Carney) and David Carter (Randy Wayne). They are joined by the mysterious Detective Christine Egerton (Alexandra Harris), a character meant to add some tension to the investigation. Spoiler alert: She doesn’t.

During the investigation into The Preceptor crimes, Sean Carter comes across the Cenobites and is questioned by The Auditor. Before Carter can be given over to The Surgeon, an angel named Jophiel (Helena Grace Donald) appears and orders The Auditor to release Carter for some mysterious purpose. Due to his encounter