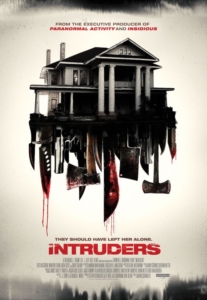 Intruders centers around Anna, a shut in who suffers from agoraphobia. Her fear is so paralyzing that when three men break into her house looking to steal her stashed money, she cannot bring herself to flee. But the intruders don’t realize that they decided to not only break into the wrong house, but to intrude upon the wrong person.

The film opens with a shot of the house. Within 10-15 minutes the viewer is aware that the house is not just a home, but a character. It feels covered in memories and lived in, a cluttered but organized type mess that comes to stand as a metaphor for Anna’s mind. The intruders to which the title refers to not only invade her home, but invade Anna’s life as well, as the house and her life are interlocked in an unspeakable way. The connection between Anna and her house lead to an unpredictable, thrilling, and sad game of cat and mouse. I’ll remain vague to avoid spoilers here.

The set up to INTRUDERS happens rather quickly and effectively. We see all we need to see and learn all we need to learn in the first 20 minutes to be able to grasp and follow the drastic turn in the story once the home invasion takes place. The invasion itself happens rather quickly and subtly. The filmmakers chose not to turn this scene into a drawn out and over dramatic event. It was a smart decision because it made the scenario seem very grounded and real and was more jarring this way; a home invasion can happen just like that, real quiet and quick, and they are in your home. Beth Riesgraf gives a fantastic portrayal of the multi-layered Anna. She does a stellar job at selling the condition she suffers from, and demonstrates believable shock in the scene where she is dragged out onto the porch, terrified of the outside world. Anna is a very complex and layered character that demands a lot of skill and talent, and Riesgraf nails it. She’s cold, icy, and machine-like and vulnerable at the same time. It’s hard to fully sympathize with the character as events unfold, yet you do a little. Just a great understanding of the character and perfectly played.

Rory Culkin doesn’t have too much to do here but he does a decent job with what he has. The stand out among the intruders is definitely Martin Starr. Hiding behind a beard and looking like Ben Affleck from Argo, he gives such a great performance in such a different role for him. Even though I knew he was in this, it never once crossed my mind that it was him playing that role!

The film slows down a bit in the final act after an exciting and interesting buildup. Instead of action, it dives into psychological thriller territory and character development that I thought added depth to the overall story.

I’m not sure if every viewer will be thrilled with the end result, as it is a bit of a mixed bag. I was left with a lost feeling as daunting as the big, maze of a house — not sure what or who from the film to latch on to as the credits rolled. But who said a film has to leave you with a definite feeling? It’s a ballsy script that doesn’t look to make friends with the viewer, but rather display a layered story with a complex lead character. And at that, it succeeds.

Because of that, unfortunately, not everyone will embrace Intruders. But it’s a solid story with solid acting, and it played with expectations enough for me to cautiously recommend it.