“Mandy” is a stylistic ride into hell and back. Hang on for a deranged ride with Nicolas Cage at his most berserk and unhinged best!

Spoiler alert. Mandy is a film that I could barely start to describe without giving away something. I apologize, but there will be a few spoilers ahead!

Mandy is a film that is going to put people in one camp or the other — this is a love it or hate it kind of horror experience. A film that should almost be in its own psychedelic horror sub-genre, I was surprised how much I loved it. Of course, there were moments that I almost felt like someone had slipped me a hallucinogenic before I started watching, but I was so mesmerized that all I could do was continue the acid-trip like journey.

Synopsis: Mandy is set in the wilderness of a 1980s Pacific North West. Red Miller, played insanely by Nicholas Cage, is a lumberjack who lives a quiet life, in a secluded cabin with his artist girl-friend Mandy. (Andrea Risborough) After a demented cult-leader decides he needs Mandy to play with, he conjures up a group of drug-crazed mutant biker demons to kidnap her. Left for dead, a broken and haunted Red, armed with the coolest weapons ever and a bloodthirsty need for revenge, stops at nothing to take out the cult members and their sociopathic leader! 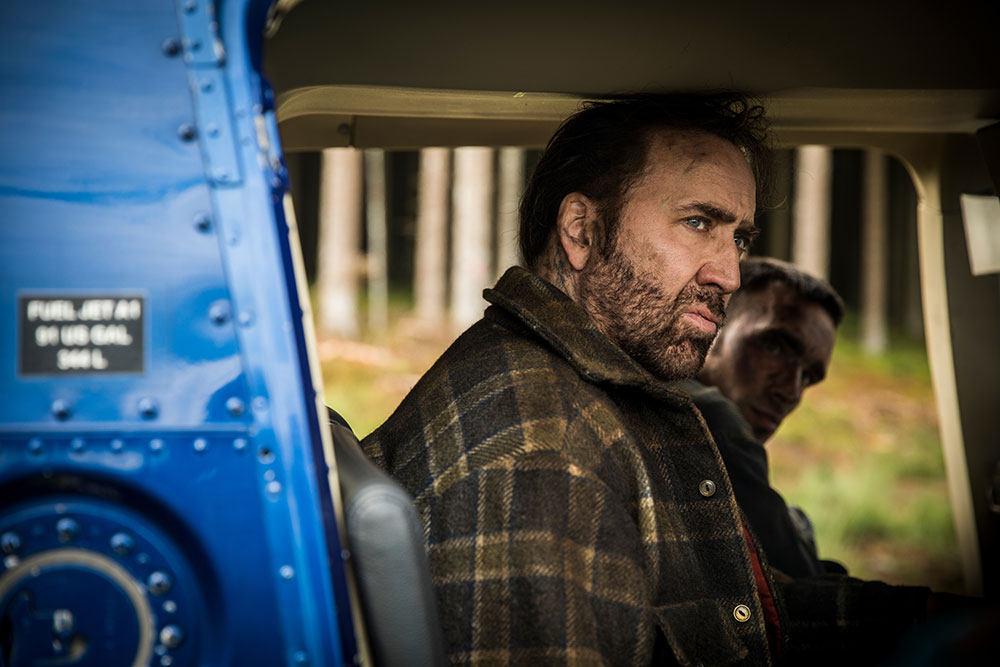 After watching the trailer and seeing that the run time for Mandy was 121 minutes, I knew it would either be the weirdest horror film I’d have to get through or the most incredible 2 hours I’d ever hope to spend. Thankfully it was the latter, because the time flew by as I was pulled deeply into a hypnotic state and was sucked into the film. I felt like I was on a drug trip, minus the drugs.

You think I’m exaggerating right? But I’m really not. I feel like I was taken to hell and back! I have survived a grindhouse film that will be shown at midnight showings and arthouse film fests for years to come.

This is a cult classic film waiting for a place to happen! There is nothing quite like Mandy, my head is still spinning!

Director and co-writer Panos Cosmatos’s use of so many different types of cinematography, editing and post-productions techniques, makes it easy to get lost in all the layers. Colored filters, superimposed images, strobe lights, animation, there is a little bit of everything. It is a horror, fantasy, slasher and supernatural film all rolled into one. There is nothing about this film that isn’t over-the-top. Even the cabin that Red and Mandy live in is a piece of artwork. An architecturally beautiful glass cage that unfortunately didn’t protect them from the predators outside.

I have to say a lot of the budget was on SFX. The many death scenes were terrifying, gross, and sometimes intentionally humorous. Even I, the lover of gore, cringed quite a few times. Since I know how a good number of the effects are done, that’s saying a lot! The weapons were incredible too. Usually you don’t see protagonists making their own medieval ax when they are out for revenge. But Red did, and it was fabulous! 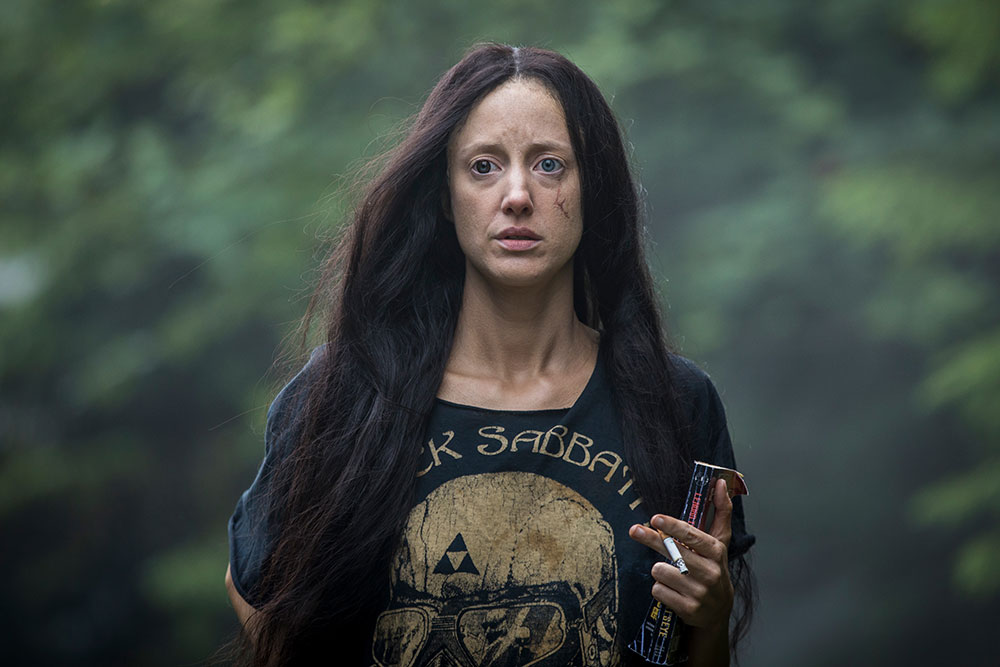 The casting was perfection for the cult and its members. The fanatical leader of the Children of the New Dawn, Jeremiah, has quite a weird, pathetic group of followers. Linus Roach, who played Jeremiah, was sublime! He will haunt my dreams forever. He is the absolute poster child for a hippie, drug-using cult leader. A perfect mix of creepy, narcissistic and perverse. His reaction to Mandy when she is not impressed with his manliness was classic!

Two of the cult members, Olwen Foure as who plays the potion making witch Mother Marlene, and Brother Swan played by Ned Dennehy were favorites of mine too.
Andrea Risborough as Mandy was quietly gentle, yet strong when she was threatened. I loved her character and was saddened to know, even at the beginning, that she would be the catalyst for the inhuman atrocities Red would soon be committing. Don’t take that statement wrong though. These monsters have it coming!

Mandy starts out slowly and deliberately, with very little time wasted talking. It is a slow burn film that, when it picks up speed, races towards an incredibly disorienting, brutal and blood-soaked finale!

There were actually scenes where I cheered out loud for Red! I rarely get that excited at horror films. It was amazing. I’ve seen Nic Cage go crazy in quite a number of films — but this was even mind-blowing for him. I believe this was his best performance yet. The screaming and drinking scene in the bathroom…OMG!

When Red is deeply in the dark-side, snorting demon biker coke with a broken piece of glass and forging a magnificent weapon of destruction that Mad Max would be proud of, you just have to stay on the rollercoaster and try not to get caught in the fountains of blood that will be spilled! Mandy is not for the faint of heart! But I loved it!

Mandy will be in theaters everywhere on September 14th. Don’t miss it!!