Part horror, part comedy, and part political satire, “President Evil” is a timely film that will have your favorite Trump supporters seeing orange. 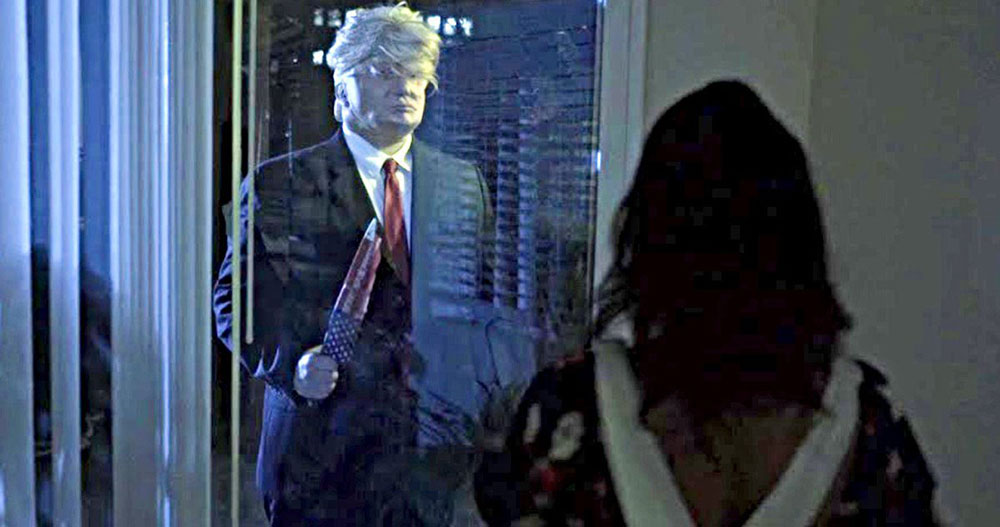 If you are a died-in-the-wool Trump supporter, this is not the film for you. You will probably like it even less than watching the film library of Michael Moore while getting your naughty bits gnawed on by rats.

I’m probably a little left of Bernie Sanders, so I thought the movie was right on target. 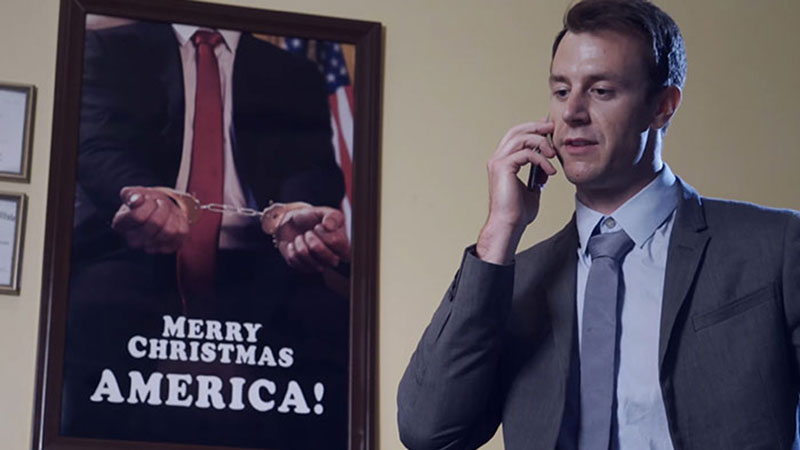 President Evil actually surprised me. It’s definitely low budget, but it offers a surprisingly effective spoof of the Halloween movies, along references to other genre classics like Young Frankenstein. It is politically on point, focusing mostly on Trump’s isolationist and sadistic immigration policies.

The movie opens with a near identical title sequence to the original Halloween with the credits playing to the right of the screen and the jack o’lantern replaced by the Great Orange Ogre himself.

The movie then opens with David, a young boy being taunted by his mother Scorchy McDaniels (Johanna Rea) on the night of Ronald Reagan’s first election win. David dons a Reagan mask and takes her out Michael Myer’s style.

The movie then jumps to the present time, just days before the mid-term election. Three girls, one Muslim, one Haitian, and one Mexican (later joined by a friend who is a war hero that has been booted out of the military for being transgendered) are planning a rally for election day. David escapes from prison and dawns a Trump mask.

Replacing Jamie Lee Curtis as Laurie Strode is Sitara Attaie playing Lana, and Attaie picks up the Curtis handle with aplomb. For a low budget film, the cast is actually a decent caliber for the most part.

The movie is scattered with references to the trump administration and the people surrounding it. There is the good sheriff who is named Mueller (Jose Rosete). There is a the doctor who has an ulterior motive, Dr. Lutin (Kyle Sing). Or my personal favorite, L. Ying Conway. Really though, this is overdone and gets old quickly.

Murder and mayhem follow, of course, as David, in his Trump mask, kIlls anyone that isn’t white and straight. He stalks them one by one. The best part of the movie is the ending when we get a one of the great kill lines of the modern era, and then when Sheriff to take our final girl to the hospital, she asks to make a stop first. Sheriff Mueller asks what could be more important than her health? She very firmly answers, “Vote.” And it sent chills down my spine.

Director Richard Lowry does a nice job of setting up shots that look nearly identical to the setups for the original movie. It’s fun to look for those moments. Throughout the movie, we also hear a Trump impersonator making a State of the Union address (moved to the fall because Trump plans to vacation in Crimea — and because it was convenient for the movie). Most of what he says is just over the top enough to make you think you might need to double check whether or not Trump really said it.

The movie makes fun of Trump and the Republican party, but isn’t too afraid to through a few digs in at the Democratic establishment. It also does a nice job of poking fun at some of the horror tropes, as we watch each character go to find out what happened to the others — one-at-a-time.

Overall, President Evil isn’t going to be nominated for any awards. It’s definitely not going to win anyone of the Trumpettes over to the other side, but it’s a fun little film that sure as hell beats out watching political ads.

President Evil is currently available to stream with an Amazon Prime membership.