Jovanka Vuckovic’s feature debut “Riot Girls” is a fun as hell, post-apocalyptic punk rock anthem — with a revving engine guitar riff and a lot of heart.

Doing what they can to survive in a world where adults have been wiped out by a mysterious disease is played simultaneously as a rule free, teenage utopia of spray painting graffiti whenever and on whatever they want — and also a shifty existence where kids don’t know everything and some lessons are learned the hard way. 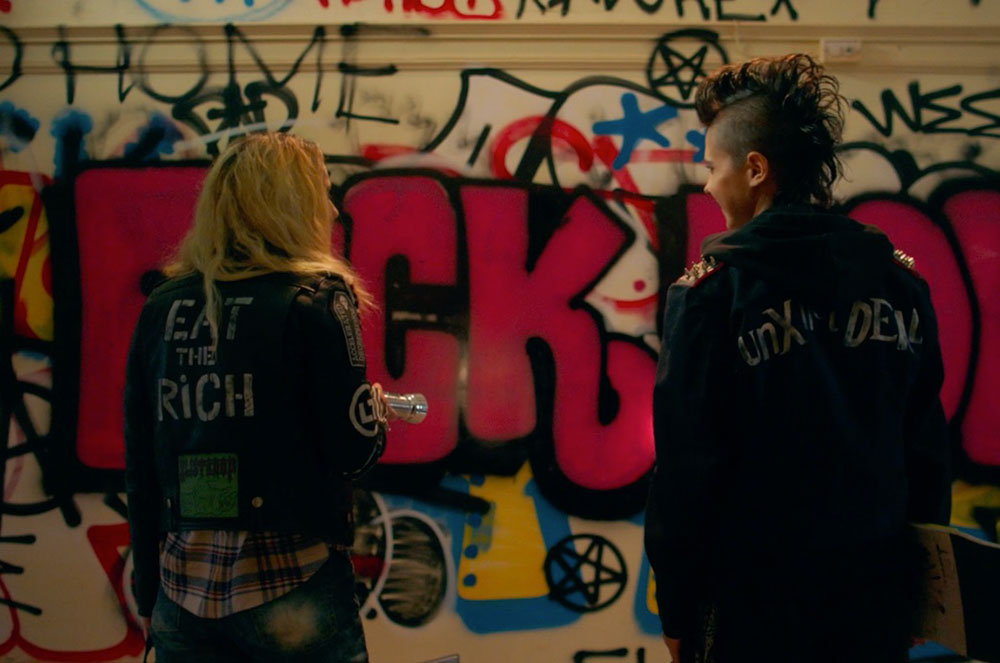 It’s rowdy, loud and sounds like noise, but, like the teenage wasteland that is Potter’s Bluff, a place that appears as messy as the music, there are underlining rules and a rhythm to follow. Rich kids on the West side, poor kids on the East — with a border toll in the middle of the bridge connecting the two, the class structure of their parents having crept into the thinking of the new teenage rulers. Stay on your side, and the peace is kept.

One of the Titans, the collection of asshole rich kids who live on the West side, is introduced in a comic book like caption as a “Total dick. Someone who would definitely sweep the leg.” Right away, the viewer knows exactly what kind of kid this is. The Titans are the ultimate evil Cobra Kai. But instead of strike first, strike hard, they stress strength, power, and respect. And respect isn’t necessarily earned, it’s demanded, because…well because fuck you, that’s why.

Munro Chambers is spot on in the evil leadership role of Jeremy, head of the Titans. He’s got that well-to-do, self important face along with a cocky smirk that is just begging to be punched. He’s got the crazy in his eyes, an intimidating quality that makes him immediately dangerous, and the acting chops to back it up, too.

East siders Nat (Madison Iseman) and Scratch (Paloma Kwiatkowski) must infiltrate the West side after Jack, Nat’s brother, has been caught and held captive after murdering some Titans for supplies. 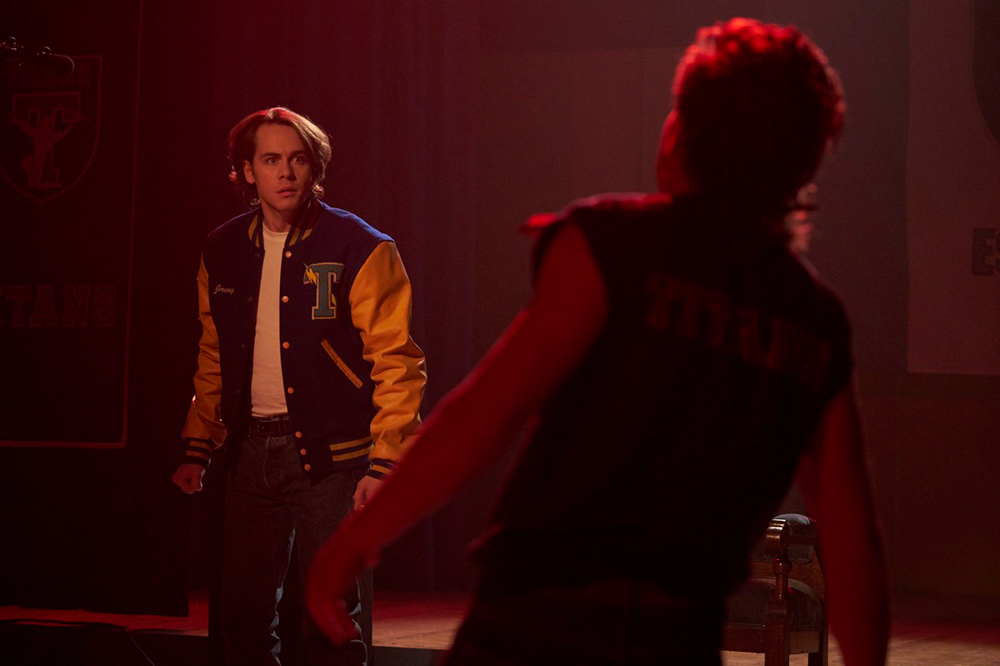 Once this gang war is waged, Riot Girls pulls no punches.

When Nat is about to get beaten up and possibly raped, Scratch pulls a gun and aims it at the boys. She doesn’t yell stop or give them a chance. This is a dangerous world after all. Scratch looks them in the eye and pulls the trigger, taking out the three of them, with the boy on top of Nat getting a hole through his head in an eye-popping, blood-splattering fashion.

Vuckovic doesn’t play this up for laughs or cheers like she easily could have. No punk music accompanies the gun shots. Nat needs a moment to collect herself, as she barely escaped a traumatic experience. People died at the hands of other people. Vuckovic allows this to be the heavy moment it is, a moment that comes up later in the form of an argument. Potter’s Bluff may be largely lawless, but it is not completely without its humanity yet.

This theme of humanity is yet another purpose this pivotal scene serves as it propels character arcs for Nat and Scratch in layered and surprising ways. 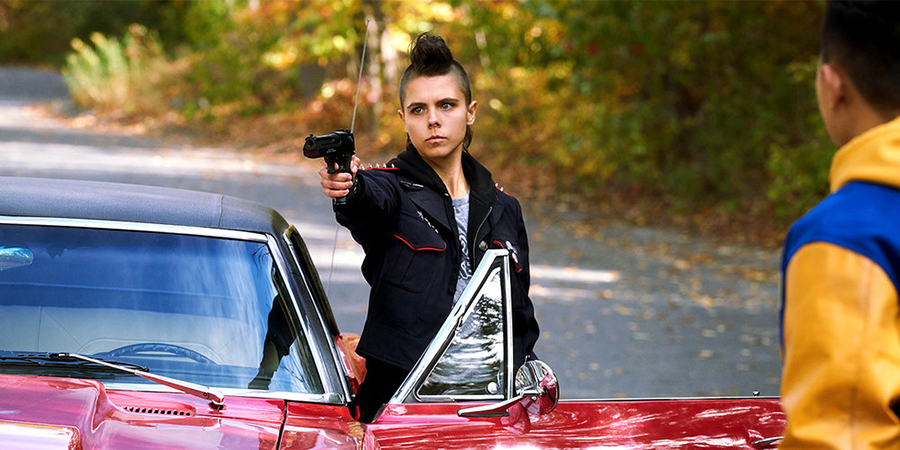 Alongside these moments of unexpected heart and growth, the film offers plenty of action and humor while pouring on the attitude.

This is what surprised me the most about Riot Girls: its attention to the moments in life that take us by surprise, and the script’s ability to blend these moments seamlessly with humor and juvenile attitude. Nat and Scratch may be aimless teenagers. But without adults around, they are forced, little by little, to grow up fast while feeling the need to rebel at the same time. But without adults, what are they rebelling against?

Perhaps they are really rebelling against the absence of adults. Because they know, without them, their youth is lost. Writer Katherine Collins and director Jovanka Vuckovic know what they’re doing here, and it shows. 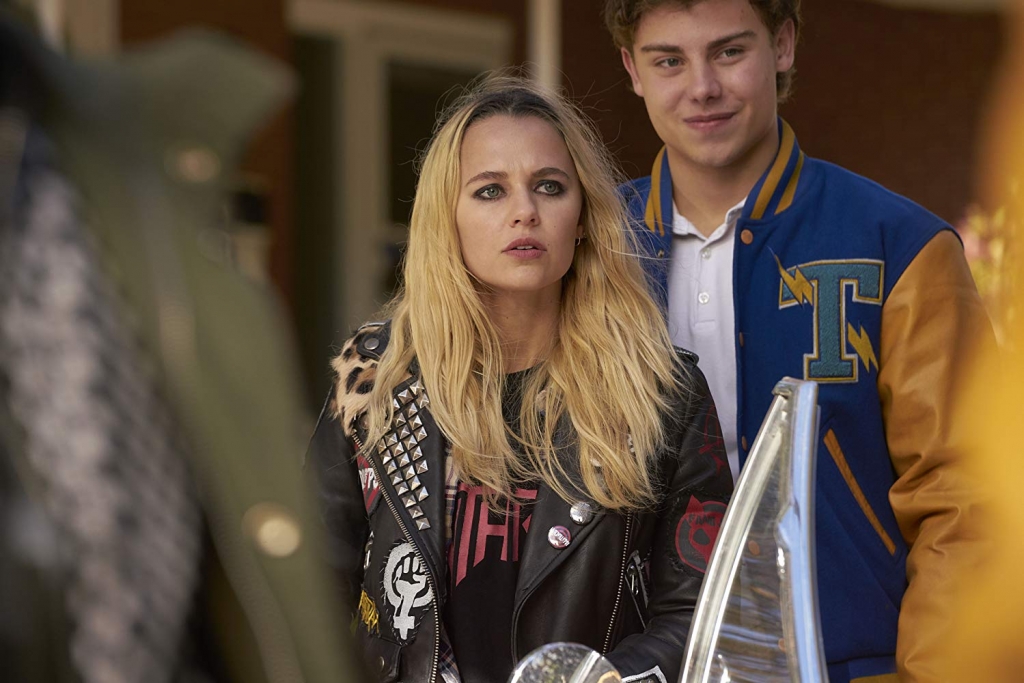 Riot Girls is Mad Max, The Outsiders, and The Karate Kid mixed up in a gasoline-powered blender.

Vuckovic has created a fun as hell, post-apocalyptic punk rock anthem with a revving engine guitar riff and a lot of heart. Madison Iseman and Paloma Kwiatkowski are excellent as Nat and Scratch, the badass, fuck-it-all reincarnation of Lethal Weapon‘s Riggs and Murtaugh.

Except they’re not too old for this shit…they’re just getting started.