“RIOT GIRLS” is a tale of badass heroines who aren’t defined by their queerness, though it’s as unapologetically in your face as their punk rock attitude. 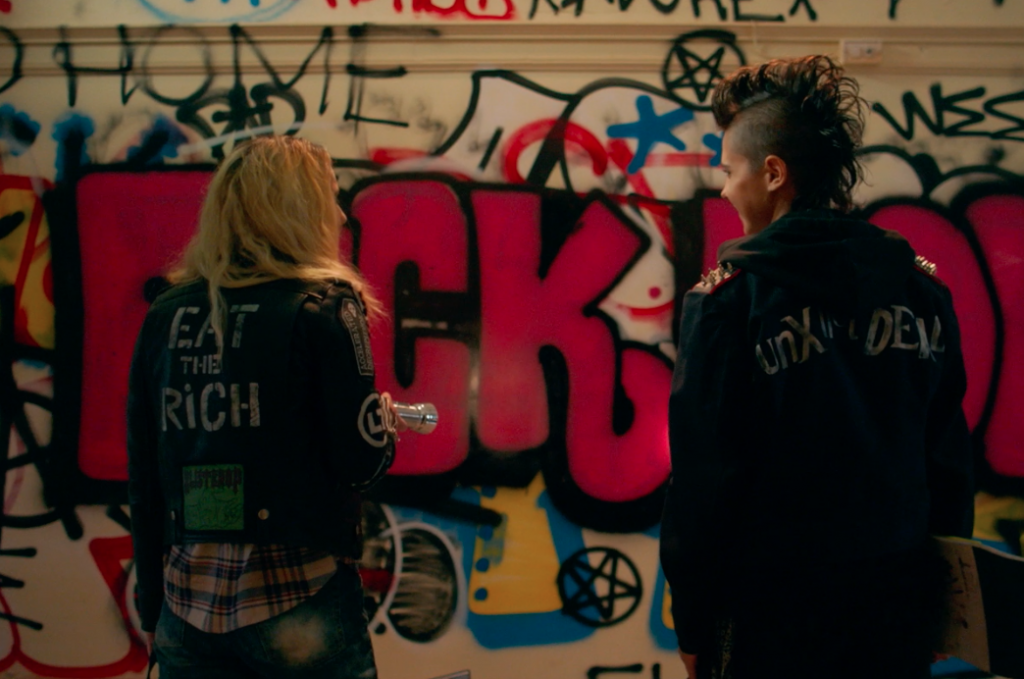 LGBTQ representation in horror has come a long way. For decades our identities have been relegated to subtext and stereotypes. We’re so used to reading between the lines, searching for clues, and reappropriating power where it was stripped from us or only given to highlight our role as a threat, a danger to society. It would be problematic to minimize the importance of these narratives, despite the negative connotations they often carry — for years they were the only reflection of ourselves that we could see on screen and that in itself gave these images power and meaning beyond the filmmaker’s intentions.

In the 21st Century, things are a little different. Harmful stereotypes still persist, but there is now a greater platform for queer artists to tell their own stories. Because of this, sometimes we get something nice. 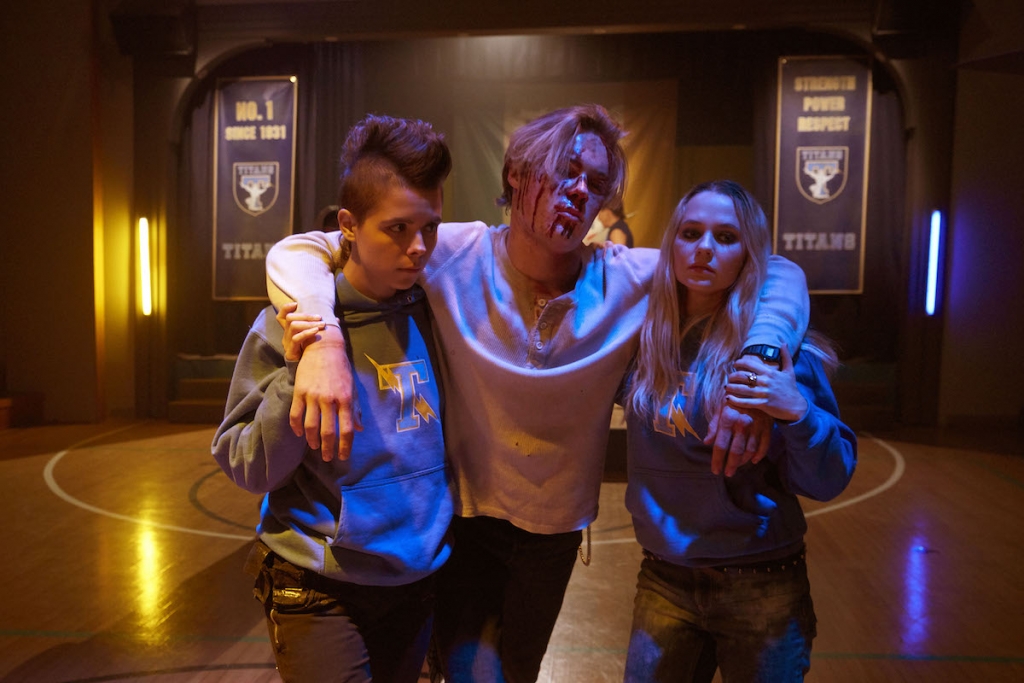 Sometimes we don’t have to read between the lines and we get to see ourselves in characters who aren’t portrayed as deviants or monsters. Sometimes we get to be the hero. And sometimes, it can be a little weird to just accept that at face value. 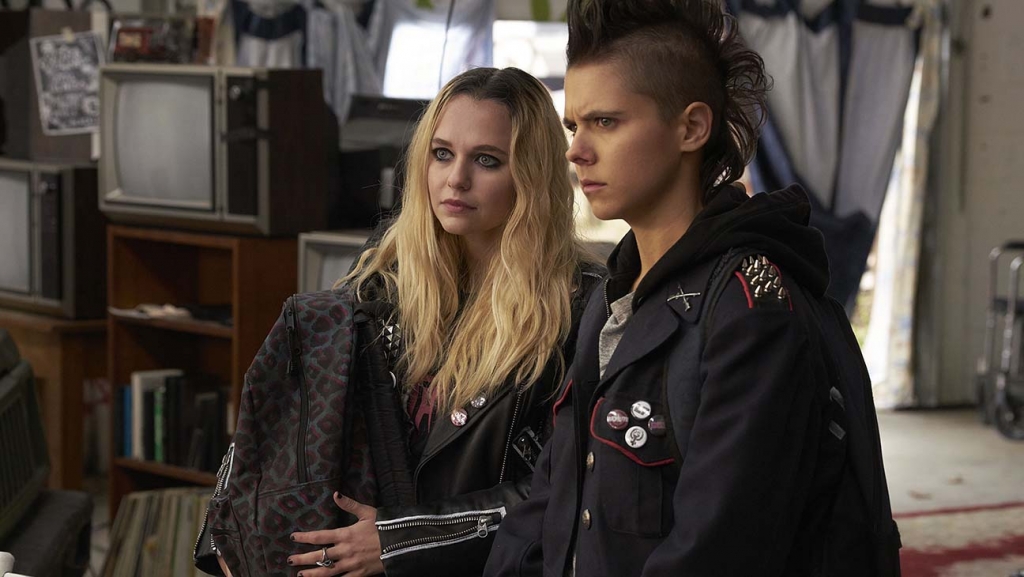 That was basically my thought process while watching Riot Girls.

I kept thinking something was going to go wrong.

They’re going to do some kind of problematic “lesbian’s in love with the straight girl” stuff. Or it’s going to be about one of them coming out — which is fine, but it sometimes feels like those are the only queer narratives that get traction.

But nothing went wrong. That’s not to say that Riot Girls is perfect in its representation — it’s not, because no narrative can be. That being said, I can find little fault in the love story that unfolds between the film’s protagonists. But their relationship can be read a couple of different ways. 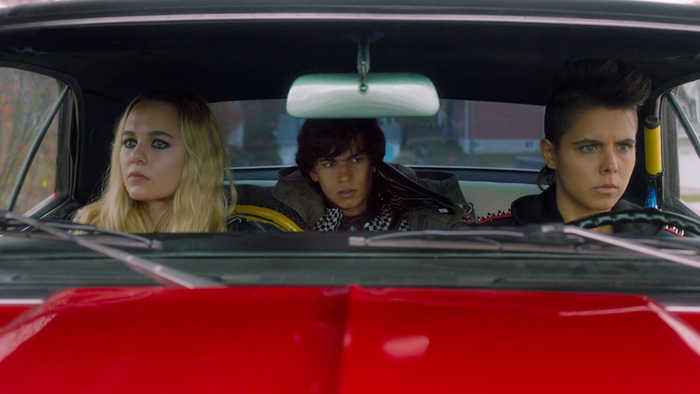 In a post-apocalyptic landscape where all adults have been wiped out by a grizzly epidemic, teenagers have inherited the earth.

The town of Pine Bluff is split into two groups: the poor kids on the Eastside and the rich kids on the Westside. In the East, Nat and Scratch are a couple of punk gals just trying to survive, until Nat’s brother is captured by some guys from the West. They embark on a daring rescue mission and end up on the path to bring down Westside tyranny for good.

My interpretation of Nat and Scratch’s relationship from the beginning was that they were in a long-standing romantic relationship.

The official synopsis of the film labels them as “best friends,” but it’s not uncommon for marketing to use the time-honored “just gals being pals” approach to downplay a film’s queer themes. Of course, they are best friends, but can’t they also be girlfriends? They share a bed, for fuck’s sake. They rescue a dog together. Bed sharing plus pets equals girlfriends.

Since I was so sure that their relationship was already established, I was surprised by a scene late in the film.

Scratch is intense, impulsive, and constantly on her guard, ready to move, fight, kill, whatever it takes to keep Nat (first) and herself (second) alive. Nat is a little more laid back; she’s much more trusting and less cynical, despite the bleak reality of the world they live in. During the course of their rescue mission, their differences result in a clash between them. Nat lashes out at Scratch for her smothering, overprotective behavior, cutting particularly deep when she points out, “you’re not my boyfriend.” 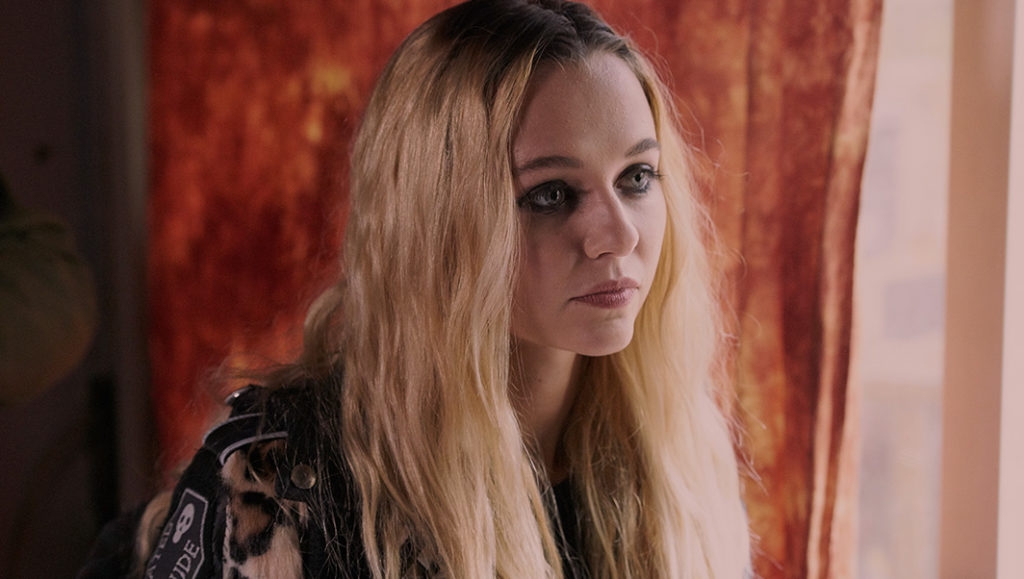 Nat later apologizes, in an emotional scene where she admits that she wouldn’t be able to go on without Scratch by her side. Most of all, she says, “I’m sorry for making you feel like I don’t love you, because I do.”

The scene — and the buildup leading to it — plays like this is them finally confessing their feelings for each other. But the revelation feels unnecessary because everything up until this point has given the impression that they have already been through this stage and were in an established relationship, even if it was unsaid. It didn’t need to be said; the love between these two characters was shown from the very beginning. 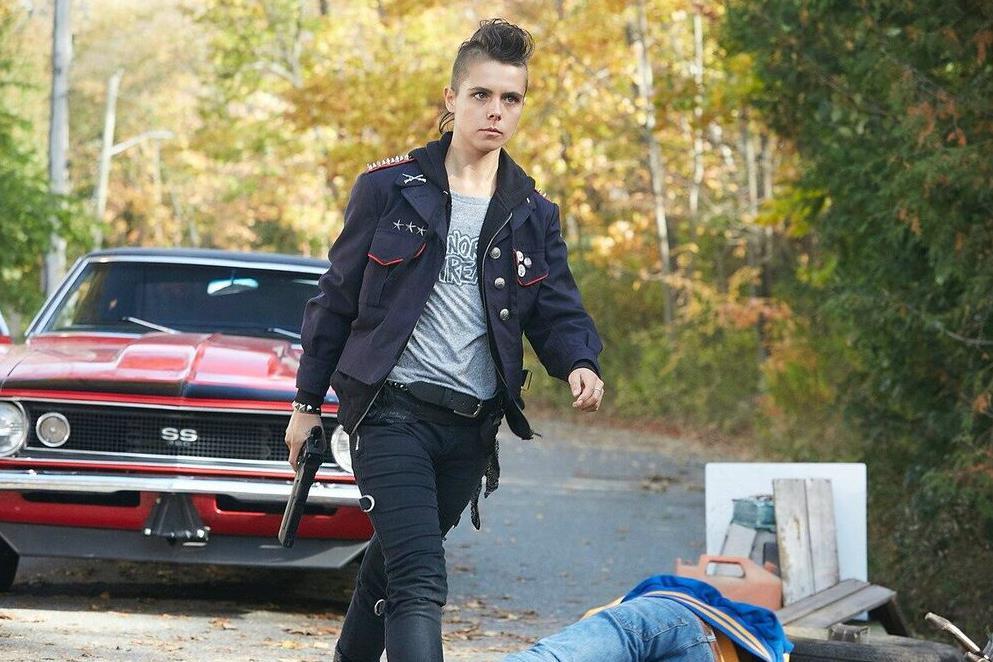 But I recognize that I’m looking at the film through my gay goggles and not everyone will read the film that way.

Some viewers (re: straight viewers) will need Nat and Scratch to confess their love for each other and kiss before they’ll read them as queer. And, on the flip side, some filmmakers (re: straight filmmakers) will show two characters of the same gender in an ambiguous, queer-coded-but-not-explicitly-queer relationship in order to get brownie points for portraying queer characters while not actually making it clear that they are queer, thus not potentially alienating mainstream (re: straight) audiences.

Representation can almost be a catch-22 sometimes. 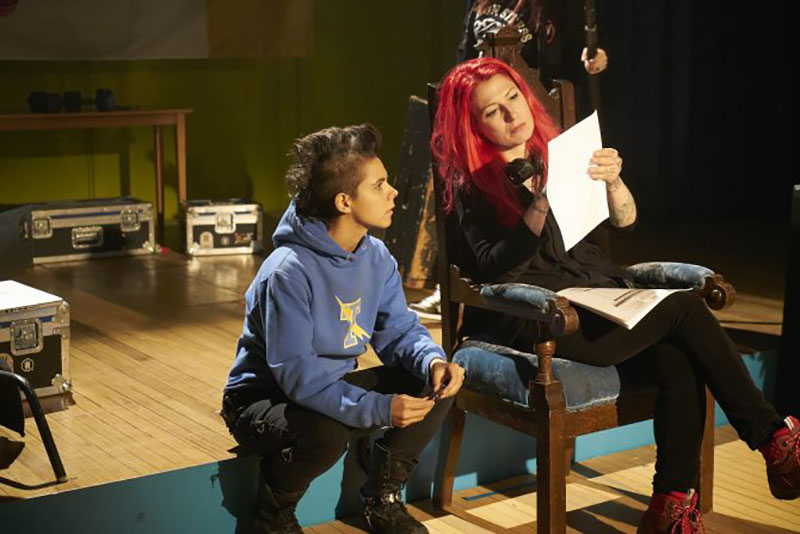 Director Jovanka Vuckovic on the set of Riot Girls

Riot Girls was written by a queer woman, Katherine Collins, whose script was inspired by her own experiences, and brought to life by director Jovanka Vuckovic. All of the women involved in this film were conscious of bringing positive representation to the table and creating complex characters who are queer without basing their characters solely on their queerness.

They’ve given us a couple of badass, punk as fuck dystopian heroines who just happen to be in love with each other. And who also adopt a dog together. It’s nice — and after decades (centuries, really) of being shoved into closets and sidelined to subtext, we deserve nice things.