Putting a poignant new twist on vampiric horror, the smart indie film “The Shed” sinks its teeth into heavy subject matter and leaves an indelible mark. 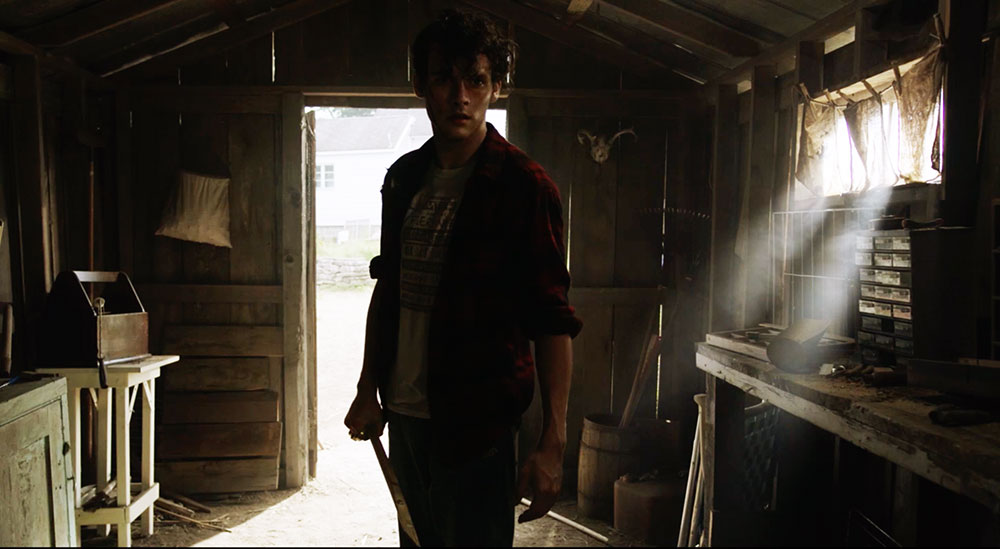 The Shed is an atypical vampire film — one that is actually far less concerned with the actual vampire in question and far more interested in exploring the impact of trauma on the human psyche.

In a compelling and tense cold open, we are immediately thrown into the action. Just before dawn breaks, a frightened man named Bane (Frank Whaley) is being chased through the woods by some unknown and unseen entity. While running for his life, his face marked by sheer terror and panic, a shadowy figure appears behind him. Within seconds, the creature is on him, sinking his teeth deep into the man’s neck before disintegrating as the sun begins to rise. 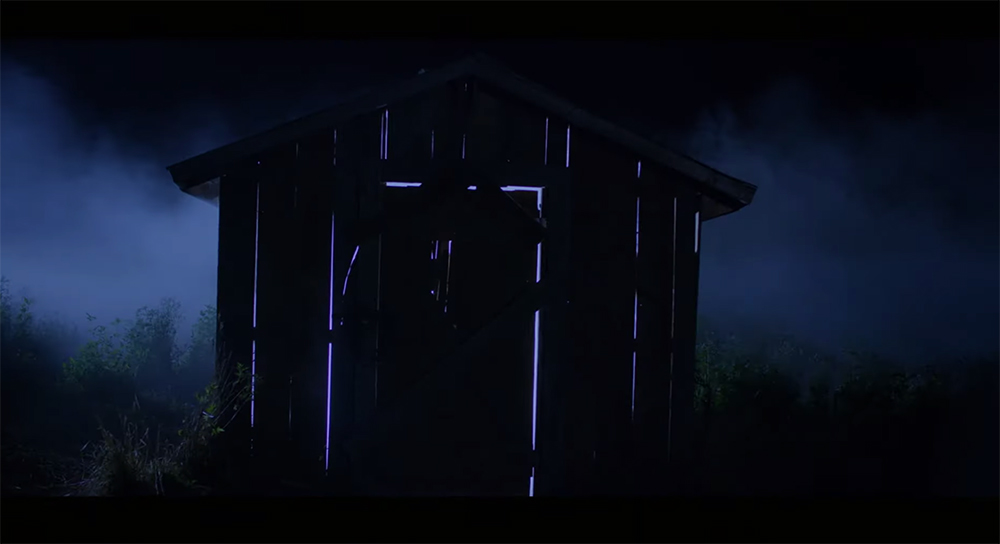 We only get a brief glimpse of the vampire, but the makeup effects are stellar — a startling vision of a modern day Nosferatu.

Desperate and afraid, Bane seeks shelter in a ramshackle toolshed at the edge of the woods. As soon as the door closes, we hear his screams from inside as he transforms from a man into a monster.

We then cut to an idyllic scene of a teen boy and his two doting parents — an overly picturesque portrait of a loving family. It’s an odd and jolting tonal shift, but we soon discover that things are not quite what they seem. It isn’t long before the wistful vision turns incredibly dark, and the boy abruptly wakes from what we learn is a dream state. Ready to welcome him back to painful reality is his angry and abusive grandfather (Timothy Bottoms). He’s there to remind the troubled teen, Stan (Jay Jay Warren), that his dream of a caring and supportive family has also turned to ash.

This is just the start of a very bad day for Stan.

After being berated by his grandfather, he drowns out the noise in his head with some music, his only source of comfort, and heads to school on his bike. Along the way, he encounters a car full of bullies who run him out of the road and straight into the truck of Sheriff Dorney (Siobhan Fallon Hogan) and Deputy Haiser (Mu-Shaka Benson). While Dorney takes pity on the boy, who has clearly been dealt a difficult hand in life, her deputy takes a much harsher and less forgiving stance.

Once at school, Stan breaks up a fight between his best friend Dommer (Cody Kostro) and the same group of antagonists who harassed him on the way to school. While these bullies, led by ringleader Marble (Chris Petrovski) like to give Stan trouble, it’s much worse for Dommer. He has been relentlessly tortured by the teens every day for years, and he’s beyond his breaking point.

To make matters worse, we soon learn that Stan’s unrequited crush, Roxy (Sofia Happonen) used to be a close friend before she fell in with the wrong crowd and started spending time with Marble and his obnoxious cohorts.

Back home, while daydreaming about happier times, his grandfather yells at him to mow the lawn. He heads out to the shed, where he discovers several bloody teeth before being attacked from the shadows by vampire Bane. He manages to escape Bane’s grasp and runs outside to untie his dog, Ike. Thinking there is just a homeless crack addict living in his shed, he sends Ike in after him when the man refuses to come out.

What happens next lets Stan know the stranger is more sinister and dangerous than he realized — and it’s a definite trigger warning for animal lovers.

When Stan tries to tell his caregiver about the murderous psycho in the shed, his ‘tough as nails’ grandpa heads out to confront him. As you might expect, things do not end well, and Stan realizes he’s got a very real and serious problem on his hands.

However, the situation goes from bad to worse when Dommer learns about Stan’s dark secret and wants to weaponize his friend’s ‘pet monster’ to get revenge on those who have wronged him. 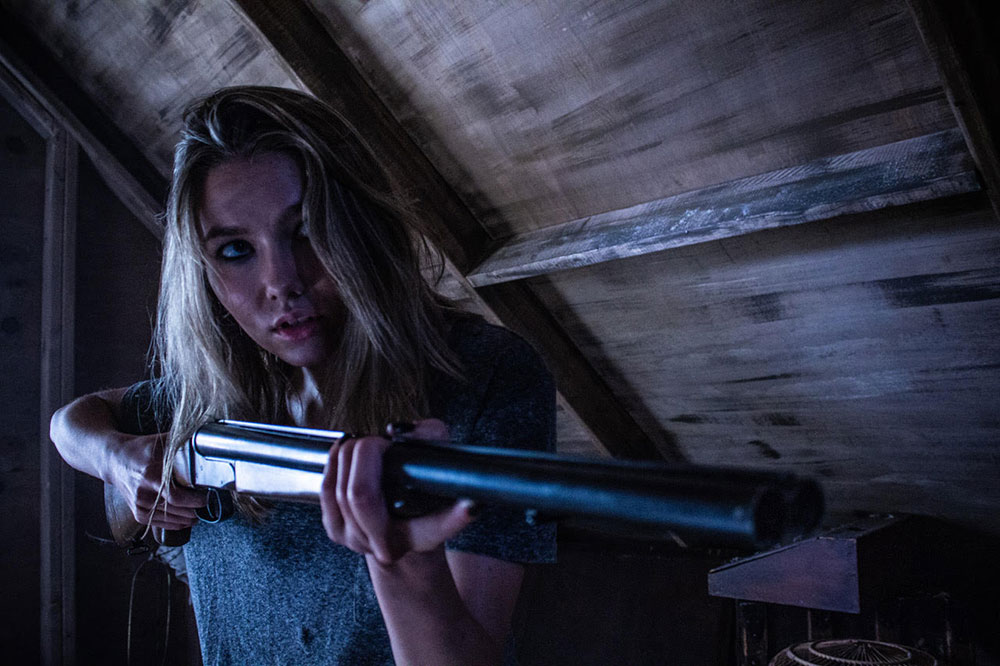 By keeping his vampire locked up and obscured in shadows, he maximizes the impact of the monster and keeps the story squarely focused on the rewarding character development (at least up until the dramatic left turn taken during the third act). Not only is this an extremely clever and industrious way to make the most of a very small budget, but the ‘less is more’ adage really works to Sabatella’s advantage here.

We don’t need to see the vampire to be frightened by him. In fact, the idea that he mostly remains a hidden horror really helps ramp up the tension and terror.

The violence in the film is treated in much the same way — understated but highly effective.

Much of the brutality happens away from sight, in quick and shocking bursts. But the impact of this violence, especially when characters we care about are involved, is only heightened by this strategic subtlety.

The reason Sabatella’s decision to keep his creature hidden for much of the film works so well is because the film isn’t really about the iconic horror villain. He’s only a creative plot device to tell a more poignant story about abuse, bullying, and trauma.

While Stan tries to figure out what to do about the killer in his backyard shed, his real battle is with the unbearable cruelty of his everyday life. Along with his friend Dommer, the two boys face the very real horrors of young adulthood and trying to navigate the treacherous waters of their formative years with very little support or a lifeline to keep from drowning.

While Stan suffers from an overwhelming sadness as a result of his loss and loneliness, he remains hopeful and compassionate. Dommer, on the other hand, has been beaten down to the point of breaking. And he no longer feels anything but rage and a desperate thirst for revenge. Thus, vampire Bane becomes a metaphor for Dommer’s downward spiral — a once innocent man who, when the demons he’s running from catch up to him, is transformed into  a soulless and bloodthirsty monster.

It’s this unique and emotional story that helps greatly elevate The Shed among other more formulaic films in the sub genre.

Unfortunately, what is essentially a very compelling character study and a thought-provoking analysis of psychological trauma takes a sharp turn in the final act. At this point, it transforms into a more by-the-numbers, traditional horror film with an action-packed, comedic tone that is completely inconsistent with the rest of the film.

Bane escapes the shed, and the teens are forced to do battle with him in Stan’s home. Undeniably, the film loses much of the depth and pathos previously established. However, it’s well shot and faced paced, and the balls-out ending may satisfy fans of bloody fun, popcorn horror. Just be prepared that The Shed ends up feeling like two distinct films at this point.

Boasting solid performances from its young cast, great cinematography and makeup effects, and a smart story that brings something new and fresh to an overly saturated sub genre, The Shed is well worth checking out.

It’s not a perfect film, but Sabatella proves he has a real knack for telling a compelling story that delivers the horror goods while managing to be about something important.

The Shed had its world premiere on Friday, October 4, at the Sitges Film Festival.