While the terrain feels a bit too well-tread, fans of both ’80s homage films and serial killers may find plenty to enjoy about Summer of ’84. 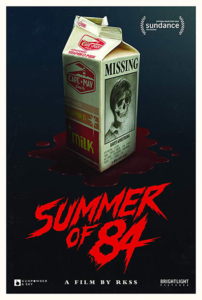 It’s summer break. What are a group of rag-tag pre-teen boys in the 1980s supposed to do other than scope out hot chicks and be dorky? Tail a suspected serial killer, of course.

Conspiracy theorist in the making, Davey, is convinced his police officer neighbor is the man responsible for the deaths of teenage boys in the area. He and his friends make it their business to stalk him and put the evidence together before he claims another victim.

The latest film from the Montreal filmmaking collective known as RKSS (Turbo Kid), Summer of ’84 is another member of the increasing “homage to 1980s horror films” sub genre of horror.

The atmosphere is what is to be expected; retro, throwback, nostalgic, etc. The score by Le Matos was a pivotal aspect to securing the desired vibe, and they absolutely nailed it. Very worthy of a vinyl release for fans of synthy goodness.

Lead character Davey (Graham Verchere) was undeniably charming to watch. His sensitivity and quiet conviction made him standout among his fellow angsty boys who were typical trope characters. Although they were talented and likable, we’ve seen them many, many times in other films (the rebel kid, the fat kid, and the chicken-shit kid). Davey’s obsession with kooky encounters and weird, morbid stuff just felt closer to home. 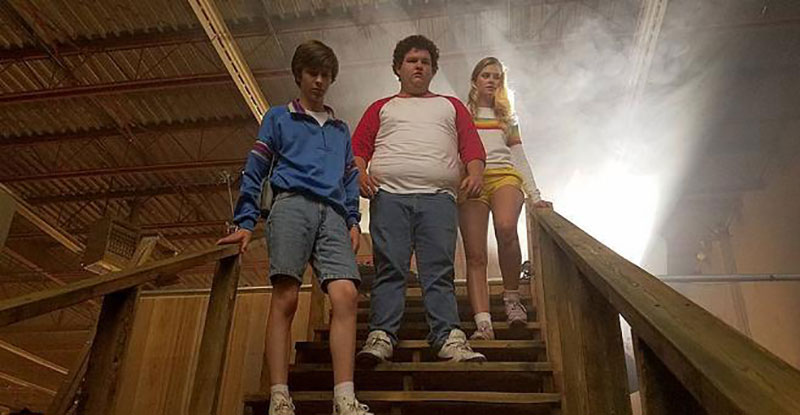 The group’s interactions felt similar to It (2017) with the overindulgence of swearing and vagina jokes, but the chemistry was there and particular moments did feel genuine. This made the film seem almost too lighthearted, as we really lacked any truly disturbing moments during the majority of the run time. One could say the scares were tame and that this could be comfortably categorized as a thriller.

Those who enjoy the throwback gimmick will also enjoy the resurgence of its clichés.

Feast upon the ‘perfect babysitter’ and the ‘too nice to be a killer’ suspect. Don’t forget about the alcoholic parent and the parents going through a scandalous divorce. It wouldn’t be a party without the ‘Can I stay at your place tonight? My parents are arguing again’ and ‘older asshole brother.’

This familiarity is fun to some, but for others it may leave you wanting something fresher. There’s a lack of twists and turns and red herrings to steer you off the path. It remains one lane the entirety of the movie and leads you to right where you expected to go.

Of note, there is no happy ending. Kudos.

If you’re a fan of RKSS’ previous work and films set in the early 1980s, by all means support Summer of ’84. It hit the mark in a lot of aspects, but it didn’t sell the thrilling ride it’s been marketing.