PLOT SYNOPSIS: SET IN THE POST-APOCALYPTIC YEAR OF 1997, TURBO KID IS A RETRO-FUTURISTIC NOSTALGIC TRIBUTE TO 80s ACTION-ADVENTURE FILMS THAT FOLLOWS A TEENAGER WHO GOES ON AN ADVENTURE TO SAVE THE GIRL OF HIS DREAMS (turbo-kid.com). 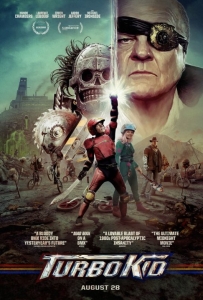 This is one of best films I’ve seen in years. Everything worked in this film — from the impressive directing and writing of the filmmaking trio (Francois Simard, Anouk Whissell, Yoann-Karl Whissell) to the great acting from the talented cast, including Munro Chambers (Degrassi:The Next Generation) as The Kid, Laurence Laboeuf (15/Love, Durham County, 19-2) as Apple, Michael Ironside (Total Recall-1990, Top Gun, Starship Troopers) as Zeus, Aaron Jeffery (X-Men Origins:Wolverine, McLeod’s Daughters) as Frederic and Edwin Wright (Underworld:Rise of the Lycans, King Kong 2005) as Skeletron.

The cinematography was awe inspiring. The ingenious use of colors made for a film that is nothing short of spectacular! I fell in love with this film at first sight. The costumes, makeup and special effects made for a very entertaining venture into an apocalyptic wasteland, full of compelling characters we have all dreamt of being at some point, with excellently executed gore and kill scenes.

Often referred to as “Mad Max on BMXs,” Turbo Kid tells the tale of a reluctant super hero and his sexy robot sidekick who do battle against a bad ass super villain with his own buzzsaw-handed sidekick.

This is a cult film for the ages with, in my opinion, one of the greatest scenes ever to appear on film — the triple stacking of dead half bodies, which was not only original but also a film first. This is officially one of my top five all-time favorite films and a must see for fans of apocalyptical, science fiction and/or horror films. It’s also just a great film to watch for anyone looking for a fun and highly entertaining, unforgettable viewing experience.

Editor’s note: Turbo Kid was adapted and expanded from the short film T for Turbo, out of the ABCs of Death anthology series (also written and directed by Francois Simard, Anouk Whissell, and Yoann-Karl Whissell). The film premiered at the Sundance Film Festival on January 26, 2015, and was released on August 28, 2015, by Epic Pictures Group. The movie is in extremely limited release, but you can find it online to rent and own on Vimeo or Amazon Prime.