With an eccentric story and engaing lead performance, “The Wave” is an enjoyable film with an unexpected message about focusing on life’s small moments.

That’s a nice attempt to spice up the most boring day of the week, but Frank doesn’t buy into the philosophy, at least not right away. Frank (Justin Long) lives an uneventful life of routine and mediocrity. The kind of life that requires a weekend getaway to be paid for with a bonus check, only to leave the mortgage the following month to go on his credit card. So when his buddy Jeff (Donald Faison) suggests a night of “adventure” to celebrate a job well done at work, Frank reluctantly takes him up on the offer.

Hello Boozeday! But a simple night at the bar for a few drinks soon turns into a wacky, drug fueled, out of control spiral of the life altering kind.

It’s suggested that Frank has done some drugs in his day after he snorts a quick line of coke and says, “I haven’t done that in a while.” But those days do seem far behind him as he struggles to remain cool and fit in when he and Jeff end up at a party. What Frank really wants is to find a quiet place at the party to explore a connection he made with Theresa (Sheila Vand), a girl he met earlier at the bar, something his demeaning, uptight wife probably wouldn’t approve of.

This quiet place he ends up finding is silently occupied by Aeolus (Tommy Flanagan), an otherworldly looking dude sandwiched between two hot girls. The slightly captivating and slightly scary Aeolus is who convinces Frank to take the drugs, taking us back to the beginning of this paragraph, and sending our guy Frank on his time hopping, reality altering adventure.

Long is perfect for this kind of role, a somewhat awkward man-boy who is used to a soft way of life.

It’s a life that finds him ordering Chinese every Tuesday night and putting a sweater on his lap dog when he takes it out at night because “it’s chilly out there.”

In the opposite, and necessary, way, Sheila Vand as Theresa is the ideal calming presence for the chaotic Long. In a smaller role here, Vand commands the screen and displays the same alluring and mysterious presence she did in A Girl Walks Home Alone at Night. Minus the fangs, of course.

The Wave is a fun trip, sleek and well-paced, with a performance from Justin Long that wonderfully holds all of the insanity together.

The whole thing is irresistibly funny and charming, and among all the colorful craziness is a heartfelt message about life, love, and destiny. 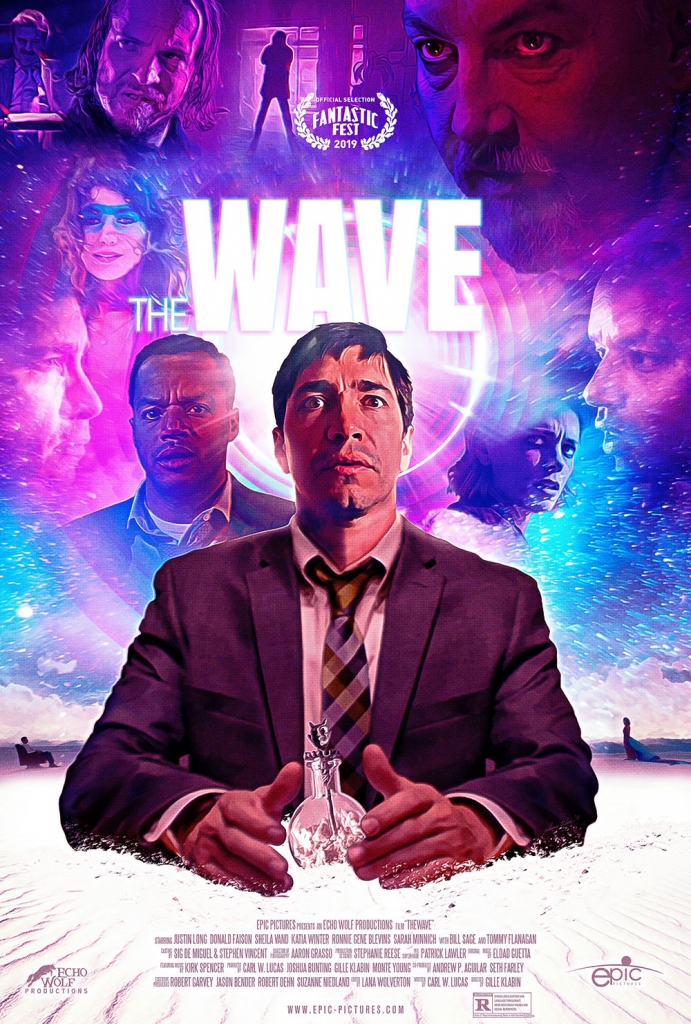 Just as life comes in waves, The Wave works the same way as a film. Each scene takes you on a new journey with, thanks to hallucinogenic drugs, time and place being a construct able to be manipulated. But what The Wave ultimately reminds us of is to take notice of the moments that build the events that happen in our lives. Because it’s in those moments, those little waves, where we truly find out who we are.

Maybe if just a moment or two were different in our lives, it would change who we are (and perhaps who we’re with), and we might find that ordering Chinese food every Tuesday night is about as exciting as we would ever need life to be.

The Wave releases Friday, January 17 on VOD and in select theaters from Epic Pictures.