The sci fi/horror thriller “They Remain” is a visually stunning and unsettling film anchored by strong performances and technical excellence.

“The decline of civilization continues apace.” 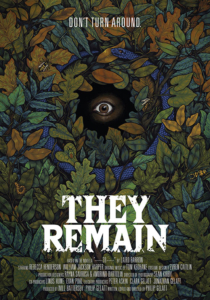 The above is a line spoken in They Remain, as vague and enigmatic as the movie itself. The film is based on Laird Barron’s 2010 novella “-30-” and was both written and directed by Philip Gelatt. Through its 102-minute run, Keith (William Jackson Harper) and Jessica (Rebecca Henderson) are not only the primary characters, but nearly the only ones.

We’re introduced to them immediately, living in a geometric temporary home in a remote wilderness. Though they work for the same corporation and were sent on this mission together, they appear to have never met beforehand. Neither of them is quite sure what the aims of the company are; they only know that they were supposedly sent to monitor animal activity (or the lack thereof).

We soon learn that the remote site they’re working in was the base for a cult whose members killed unknown numbers of people, and possibly even buried them in the area.

Jessica spends most of her time within their camp, testing samples of soil, bugs and other things in the area to look for anything unique or previously undiscovered. Keith spends most of his days within the forest, setting up and checking live-stream camera feeds to track any sign of movement or life. The found-footage aspect of the cameras, while not heavily used throughout They Remain, does add an air of suspense to certain scenes: we want to see what’s on the cameras just as badly as our protagonists do.

It doesn’t take long for things to get weird. There are knocks on their campsite building, disembodied voices, shadowy figures and more. It frequently makes you question how much of what Keith and Jessica are experiencing is real or not. Of course, that means that these two near-strangers who have been brought together in isolation also don’t entirely trust each other.

There are shades of other sci-fi horror/thrillers in this film, including Alien, The Thing, and, most recently and most similarly, Annihilation. While this one doesn’t veer into sci-fi territory as hard as others, there is a through line of it.

It’s hard to say too much more about its plots and themes without giving too much away — even the movie doesn’t give away that much information.

On the other hand, this film is a technical marvel. The director, cinematographer and editor worked together to create jarring cuts and incredibly brief flashes of images, interspersed with longer shots of beautiful scenery, with or without the two main characters in frame. The visuals, together with the music and other sound design, create a film that is unsettling at the least, and downright confusing and terrifying at times. Actors Harper and Henderson both give standout performances here, with Harper particularly seeming to delve into his character.

It’s not without its flaws, but they’re not enough to take away from the movie’s atmosphere.

They Remain played at multiple festivals and had theater runs in select cities, but will be available on Blu-ray and On Demand on Tuesday, May 29. If you’re looking for the next strange thriller with a less-than-linear plot, Philip Gelatt’s They Remain is a good choice.