Exploring both supernatural and real world horrors, “The Tokoloshe” is an ominous, slow-burn thriller that will get under your skin.

Director Jerome Pikwane’s debut feature film introduces the audience to the mythological creature bearing the same name, while also highlighting a very real and horrific struggle in South Africa. With dialogue in both Zulu and English, and many real locations as opposed to sets, the film has a very authentic feel.

Synopsis: Busi, (Petronella Tshuma) a destitute young woman, lands a graveyard janitorial job at a rundown hospital in the heart of Johannesburg. Desperate for the money so she can bring her younger sister to live with her, she must cope despite the horrible hospital manager. When Busi discovers a young girl named Gracie (Kwande Nkosi) alone in the hospital, who believes she is tormented by a supernatural force, she must face the demons from her past, in order to save Gracie from the monster that seems to reside inside her.

Having personally spent some time in the city of Johannesburg where the film is set, I saw dire poverty everywhere. In South Africa’s biggest city, it was overwhelmingly awful to see the reprehensible living conditions. Spending another month in neighboring Mozambique, I was again saddened to witness the horrible circumstances that people all over Africa are in.

This film uses the Tokoloshe myth figuratively to illustrate the struggles going on in this country, especially for women. 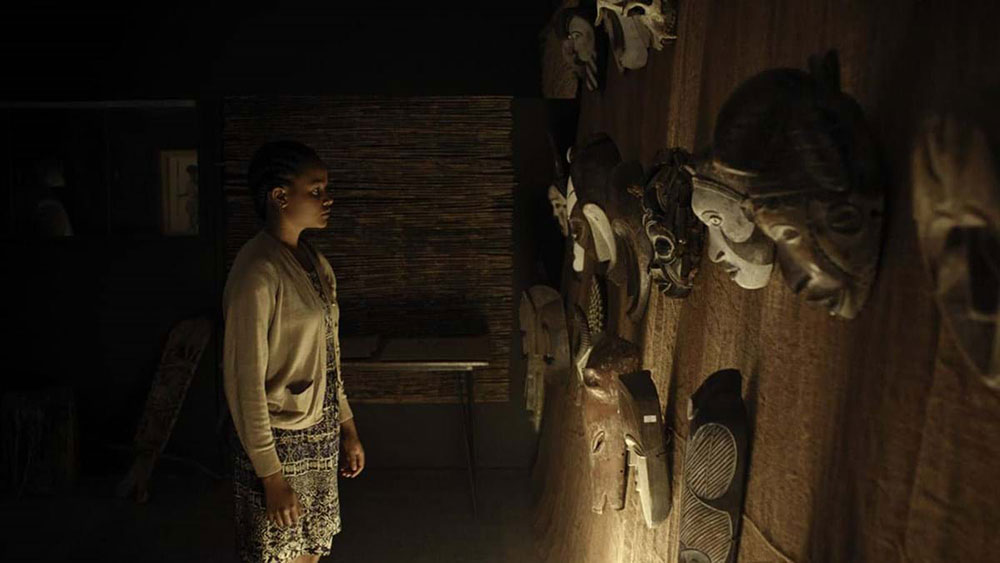 So, what is a Tokoloshe?

The South African urban legend is a slimy and menacing water sprite. We see childish drawings of it covering the walls all around the hospital where Busi works. Being able to turn itself invisible with a drink of water, it can stealthily maim and kill with its terrible sharp claws. Like a poltergeist, this monster can throw things around the room and is a malevolent spirit summoned by those that wish to destroy others. It is “as old as mankind, picks on the lost and the weak, and feeds on children and those left alone”.

Busi is a shy sweet-faced girl who just wants to work and make some money. A corrupt and lecherous boss makes her life miserable at the deteriorated hospital she is employed at. As a child, she and her sister encountered the Tokoloshe, and it seems to have followed her all the way to the city. Everything around her — from the empty and filthy halls of the hospital to her apartment in a condemned building — reeks of loneliness and decay.

One night at work, Busi finds Gracie, an abandoned little girl, injured and sitting alone in the hallway and talking to something in front of her. Terrified, she looks to Busi, who takes her to her room and puts her to bed. That night, the Tokoloshe visits the ward and something horrible happens. From here on, the monster has its way with the world around Busi, and her life will never be the same.

Taking Gracie and running home, Busi comes to terms with her past — and the surprise at the end is worth the wait.

The acting from everyone was very well done, with an especially great performance from Petronella Tshuma.

It was wonderful to see such a courageous black female protagonist. She had a strength that was undeniable, but her sad vulnerability had me hoping she could get through everything thrown at her. I wanted her to make it!

Kwande Nkosi was also amazing as Gracie. Her unlikely friendship with, then terror, of the monster was creepy and contagious. Her intense performance left me scared of the creature that would not leave them alone.

The Tokoloshe is a powerful tale, giving us a clear picture of the general state of the country.

Repression, poverty, sickness and depression all are a part of the daily lives of girls like Busi. Is this monster real or just a personification of all the trauma she endures daily?

The horror in South Africa is very real though, even without adding in the urban legend of The Tokoloshe. This is a story that needs to be told, and the horror genre continues to be a safe place for racial and cultural diversity. Even though the center of the film seems to be about the mythical monster, it is about real monsters.

Busi had a very abusive and traumatic childhood. Moving away to the city, she does everything she can to raise enough money to take her sister out of the same hell that she was raised in. Life has not been fair, and she must deal with the nightmares of a damaged childhood. This creature is a metaphor for the terrible time Busi has had so far. Her inner trauma is so intense, and this young woman has no control over her own life. Everyone she runs into wants to hurt her in some way.

There are a few places where the storyline doesn’t line up perfectly or the pacing seems off. But overall, this is a wonderful film — an amazing first effort and a fantastic story of how to survive the metaphorical monsters under all our beds.