An eerily prescient film about being isolated and trapped in a life you didn’t ask for, “Vivarium” perfectly captures the horror of current times. 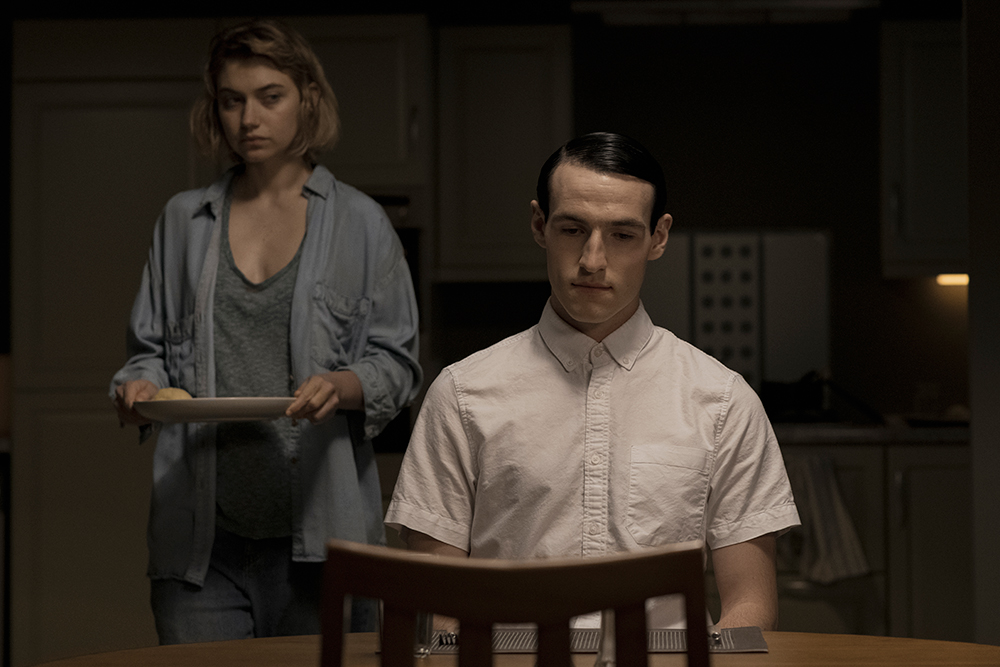 As if plucked right out of The Twilight Zone, or a Black Mirror, Vivarium illustrates the current feeling of isolation perfectly, although filmmakers Lorcan Finnegan and Garret Shanley would have had no way of knowing that when they started on their journey.

Fascinating and weirdly wonderful, this Sci-fi thriller engaged me right from the start. Vivarium is possibly too much of a slow burn for some, but I was mesmerized and sucked directly into the bizarre and screwed-up narrative.

Synopsis: A young couple looking for the perfect home, find themselves stuck in a labyrinth-like neighborhood of identical houses.

The film begins with baby birds, showing how one is nurtured at the expense of another. Nature is cruel and random, Gemma (Imogen Poots), a kindergarten teacher, explains to one of her students who finds a dead baby bird on the ground. In an interesting parallel to what is coming, this opening sets up a compelling but unsettling premise. To survive, we must have our basic needs of food and shelter met. Stripped to its essence, life is really just that simple — and just that harsh. In the end, surviving is much easier than really living.

Gemma and her boyfriend Tom (Jesse Eisenberg) are in the market for a home. 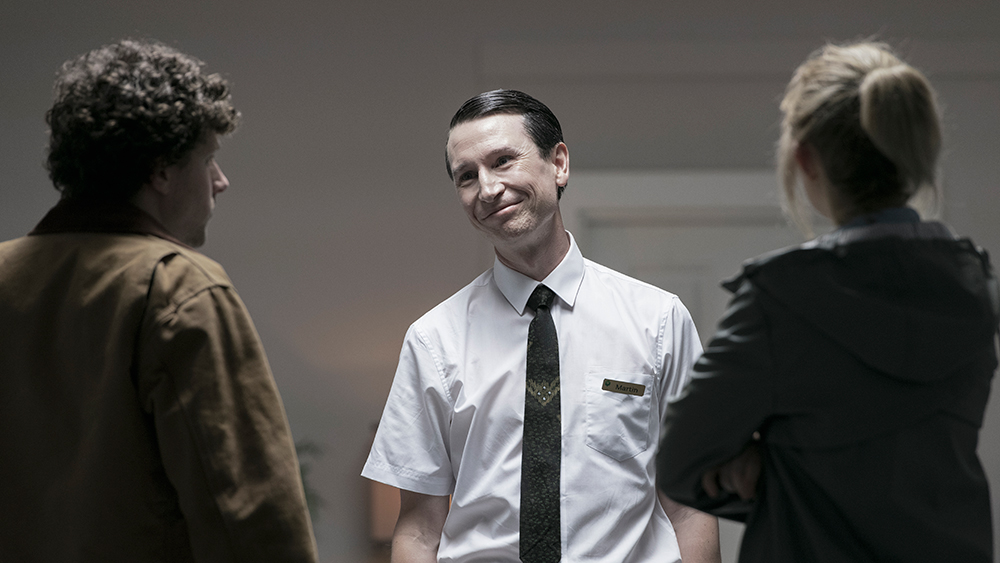 They are ready, they think, to go the next step in their relationship: cohabitation and maybe a family. Unfortunately, during that search, they find themselves at the mercy of a creepy realtor named Martin (Jonathan Aris) who talks them into following him to a mysterious new housing tract called Yonder. All the houses are carbon copies of each other, the perfect metaphor for the mediocrity of suburbia.

I have seen neighborhoods like this and wondered myself, “How could someone live here? How would you find your own house?”

Martin takes them on a tour of mint green house #9. (They are all mint green.) Complete with matching furniture and food, it is ready for moving into. By the time Gemma and Tom are rolling their eyes and edging towards the door for a quick escape from the tedious home from hell, they realize Martin has disappeared.

Getting into their car to drive away, they find themselves unable to find their way out of the hedge-like maze of houses. Every turn brings them back to #9, and they finally run out of gas. At first, they unsuccessfully try to find other ways out.

But it does not take long before it hits them; they are stuck in Yonder. 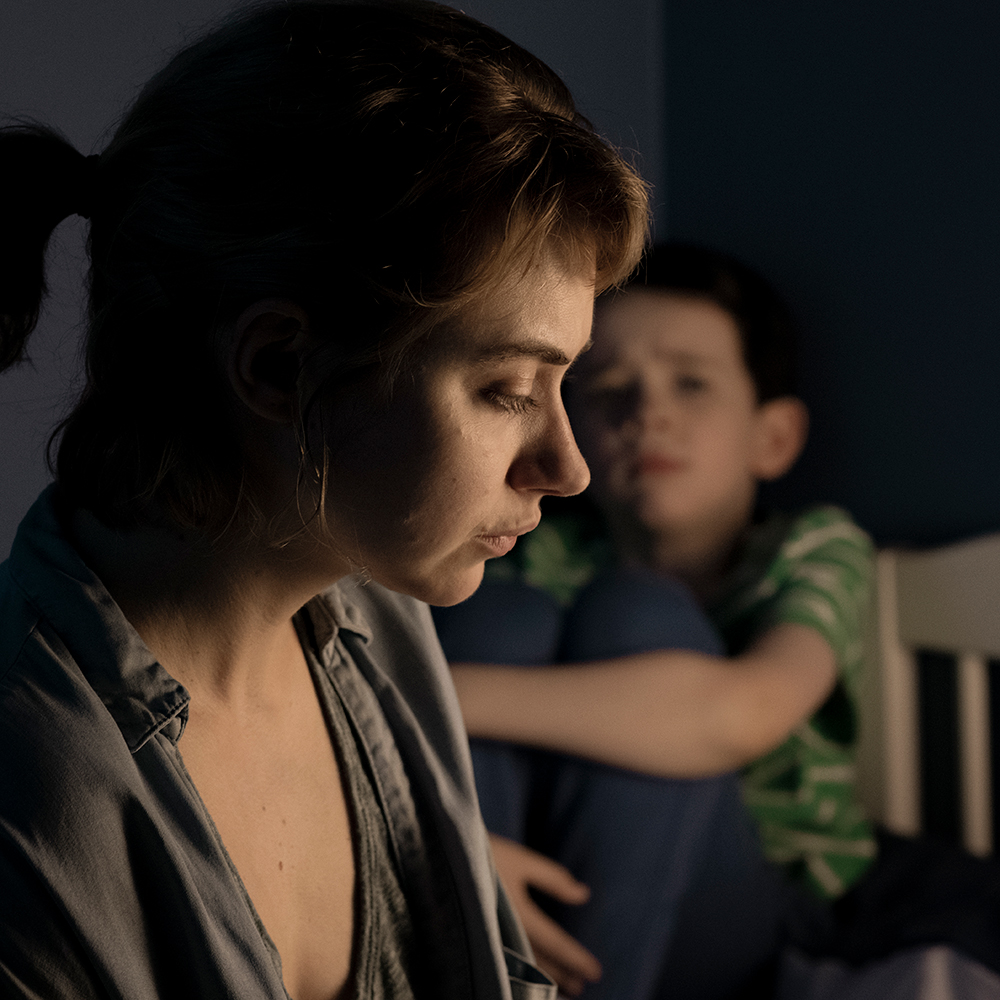 There are no other people, no cell signal, and no way out. Food is dropped off in boxes in front of their house, as bland and tasteless as the neighborhood. Close to losing their minds, Tom finally sets the house on fire and they sit on the curb to see if their fire gets anyone’s attention. To their horror, when the smoke clears, the house is as good as new, and a new box is waiting for them.

This package brings them a baby, with the note: “Raise the child and be released.”

Kind of like having a real kid, right? The only problem is, this is not a real child. It is a copy of a child, from whoever has orchestrated this horrible nightmare. The child grows at an amazing rate, wears a white dress shirt with slacks and mimics them with a creepy voice that sounds half childlike and half adult. Screaming for food and watching them becomes his daily routine. This is not a child that can be loved, though Gemma tries.

This drives Tom to find his own “job” in the relationship; he starts trying to dig his way out.

What fascinated me was seeing how they both handled the situation. 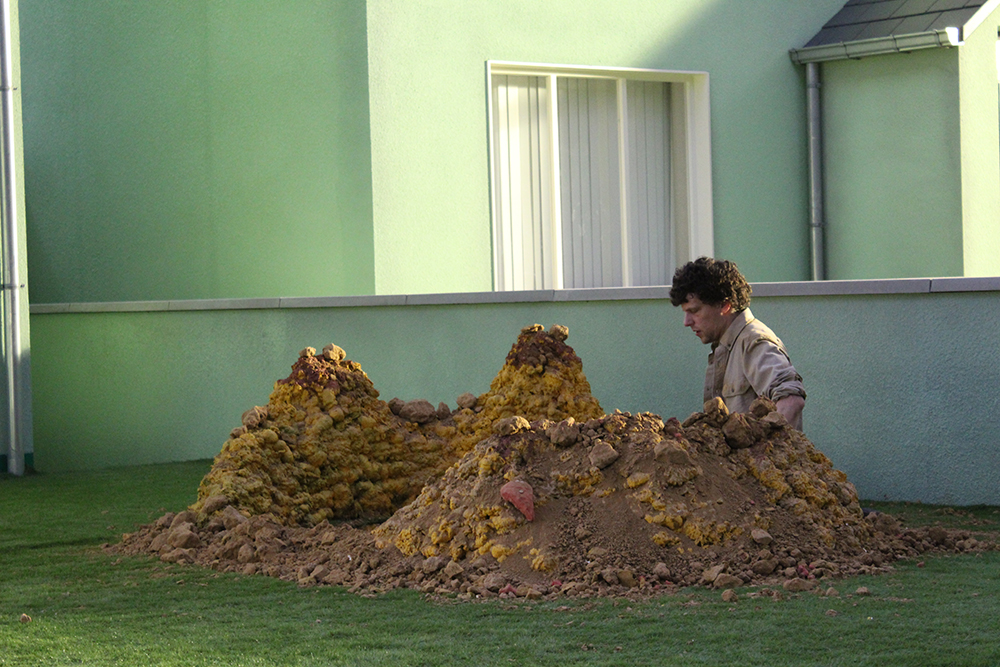 Gemma tried to find things to entertain herself, like playing games with the boy, and trying to follow him on his daily walk to a place she could never get to. Even though forced, the couple each takes on roles that could seem “normal” — the stay-at-home mommy role for Gemma, with Tom as the hubby going off to work.

The problem for them was that these jobs had no redemption. And in this claustrophobic situation, they are torn apart. Their life is repetitive, mundane and joyless.

The real horror of this story is that nothing ever changes. Endless days and nights that blend into more of the same. The boy continued to grow quickly, just getting bigger and creepier, while Gemma and Tom just keep doing the same actions each day, almost as if in slow-motion, until things eventually spiral out of control.

Vivarium is an eerie nightmare that Gemma and Tom never wake up from. 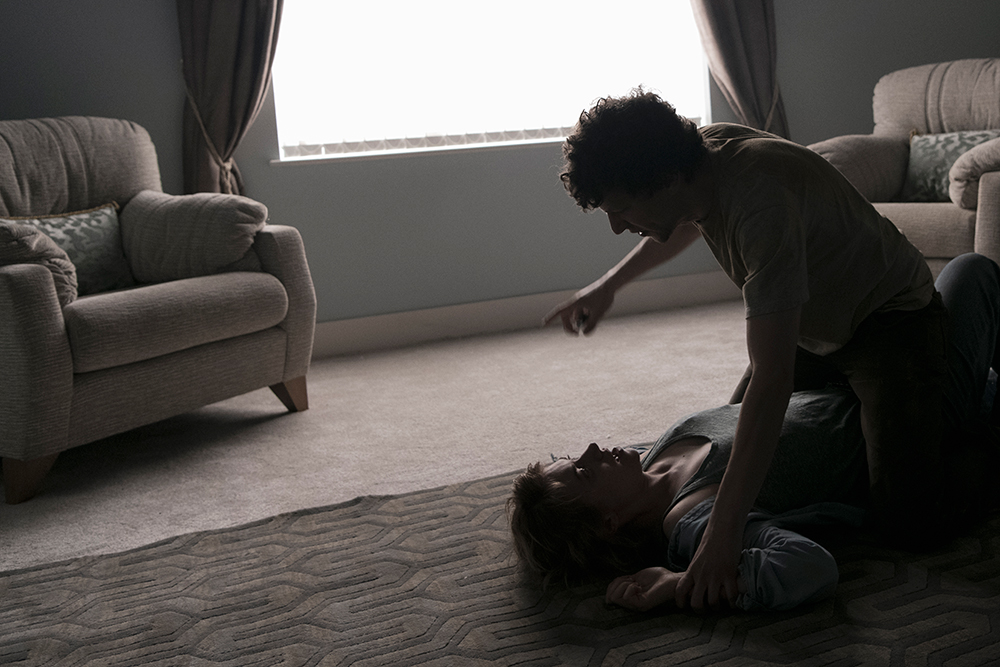 Who is doing this to them is never revealed, although it is obvious they are not the first to be experimented on. They are lab rats in a cage. And, as the title suggests, they are being observed in a controlled environment — literally poked and prodded by an invisible mad scientist.

Subtle but stellar acting makes this film successful. Eisenburg and Poots were terrific, but my favorite was the young boy, played by Senan Jennings. With a Children of the Damned vibe, he could almost be a cute kid. Then he would scream, or mimic them with his horrible voice and repeat verbatim things they said. He was much more like a robot than a real child.

I recommend ‘Vivarium’, highly. There is so much relevant social commentary, and it leaves you with a lot to think about in the end. Tedium and boredom can destroy us, and I was dying to know who was there silently watching them implode.

I know things have been monotonous for many of us recently, but I think we can see an end to it, in a way that this couple never could. If anything, it should make us feel better, that they have it worse than we do. Isn’t that what watching horror movies is all about?

Vivarium arrived on Blu-ray and DVD on May 12, 2020 from Lionsgate.