Though often overlooked in the pantheon of religious horror, “God Told Me To” remains Larry Cohen’s most dangerous film, as well as his most essential. 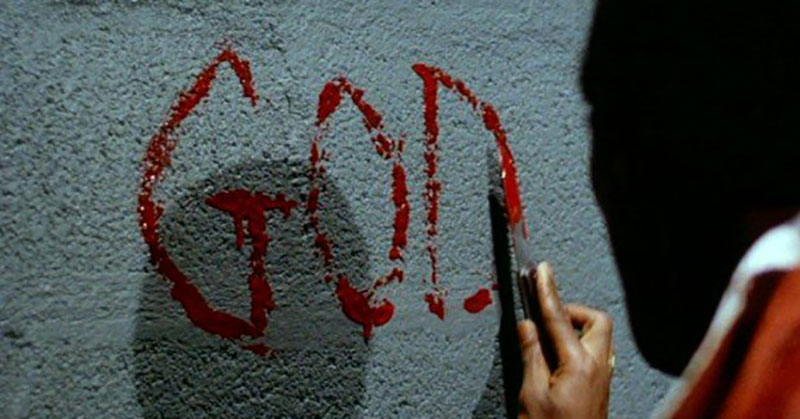 With the gift of hindsight and the knowledge that standardized tests don’t matter, the proudest achievement of my Lutheran high school tenure was making the only parable film too violent to be shown in chapel.

In my defense, it was a Biblically accurate story, if not exactly a parable. For anyone out there who has never been graded on how fast they can recite the books of the New Testament, parables are just holy folktales with a lesson at the end.

There’s a scene in The Nice Guys where Russell Crowe tells a ten-minute, second-hand account of some guy crashing his car in the middle of nowhere and, in his final moments, seeing Richard Nixon loom over him to provide comfort. Ryan Gosling asks him what the point of the story was. Crowe says the point is that nothing is ever quite what it seems. Gosling asks why he didn’t just say that in the first place. Thus, parables.

You already know some. 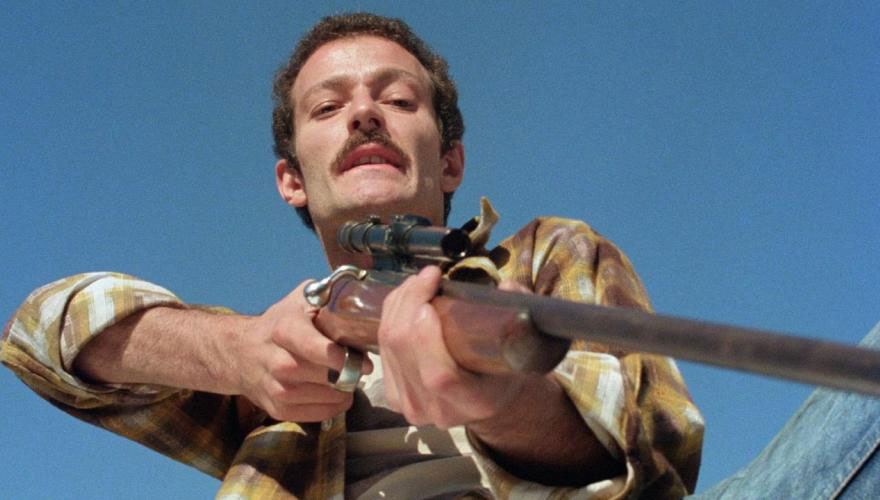 That last one was the most popular. Every semester, Video 1 turned out at least three Prodigal Son adaptations about a kid getting the books knocked out of their hands and a kind stranger stooping to pick them up, usually set to an acoustic song comparing an unspecified He to a storm of some kind. The student body clapped for the good, the bad, and the incorrectly exported just the same. But it all melted together in my adolescent brain.

When you zoom out far enough on New Testament philosophy, it’s no different than what Patrick Swayze tells his fellow bouncers in Road House: ”Be nice.”

Which is why I went Old Testament.

I dug into the book of Judges, a repetitive series of goofs by the Israelites and the superheroes God sends to save them, often in wildly violent ways. You probably know Samson with the good hair. Well he also killed an entire army with a donkey’s jawbone, but that part lends itself more to John Wick than VeggieTales.

I picked the story of another judge that assassinated a corrupt king by sneaking in a left-handed sword that none of the right-handed guards thought to check. I updated the king to a nondescript crimelord in the most threatening coat we could find at Goodwill and the left-handed sword to the ol’ Die Hard gun-taped-to-the-back trick.

I got an A, but nobody outside the class saw it because it ended with a crudely keyframed gunshot. Another casualty in the fight for theatrical distribution.

If nothing else, it was a case-in-point epilogue to the most interesting assignment of the class, our only essay. 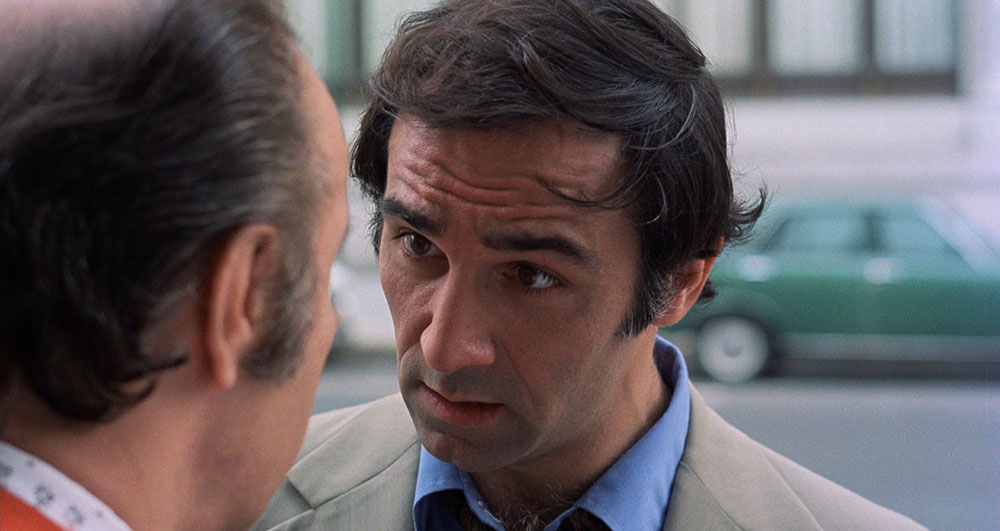 We had to read some coverage of the then-recent Kirk Cameron vehicle Fireproof, about how it was an Important Film for Christians to see, and give our opinion on the matter.

I hadn’t even seen Fireproof when I wrote my response, but my argument still stands, in an era where loud-and-proud Christian entertainment has its own streaming service.

Why are movies based on one of the most fundamentally challenging questions in human history somehow the least challenging pieces of art?

They’re always right over the plate, about a straight white guy growing apart from his straight white wife and some wizened authority — maybe a dad, maybe a pastor, maybe a literal personification of the divine — convinces him to stick it out for God. He does. Happiness ensues. Roll credits, usually set to an acoustic song comparing an unspecified He to a storm of some kind.

Nobody who walks into that movie with doubt is going to leave without it. I’m not saying it has to prove the afterlife, but rarely do these movies even entertain questions to the contrary. They’re chicken noodle soup for already-saved souls.

Larry Cohen’s God Told Me To may play awfully fast and admirably loose with the Judeo-Christian canon, but damn if it’s not more interesting than anything Pure Flix ever put out. 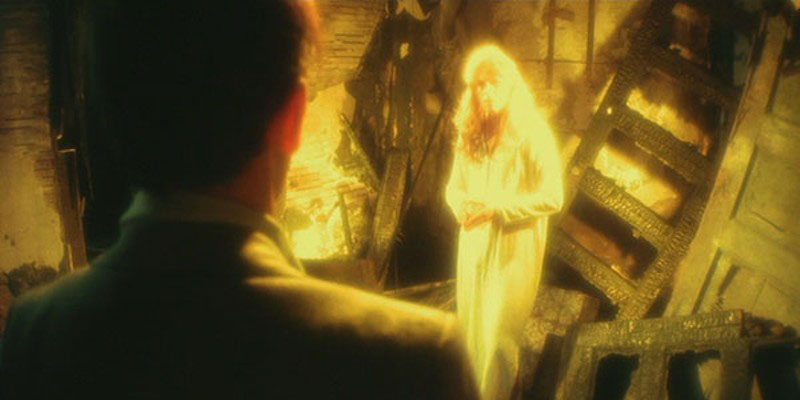 By the stilted metric of Rotten Tomatoes, it was his warmest critical reception as a director. By any contextual standard, God Told Me To was just weird. Cohen’s previous movie, the infamous It’s Alive, opened two years prior with a studio-mandated shrug. It would be re-released in 1977 after a successful appeal from Cohen and a fresh crop of executives at Warner Bros., but that still left 1976’s God Told Me To as the introduction for most horror audiences to the equally infamous writer-director-producer.

New World Pictures spared no expense making sure those audiences knew what they were in for. Ad spots warned off the squeamish and claimed every religious leader in the country was forbidding the faithful from watching it. All nonsense, of course, but New World paid more for the distribution rights than they ever did on any movie before or since. They needed the press.

God Told Me To didn’t get much anyway. The first big-screen appearance of Andy Kaufman wasn’t enough of a draw. Not even a re-release under the grindhouse-friendlier name Demon tore many more tickets. Its non-reception, complete with a one-star jab from Roger Ebert, was probably due to its shifty sense of genre. For all its window-dressing, God Told Me To isn’t much of a horror movie.

Not that it isn’t horrific. The opening works better in that regard now than it did in 1976. 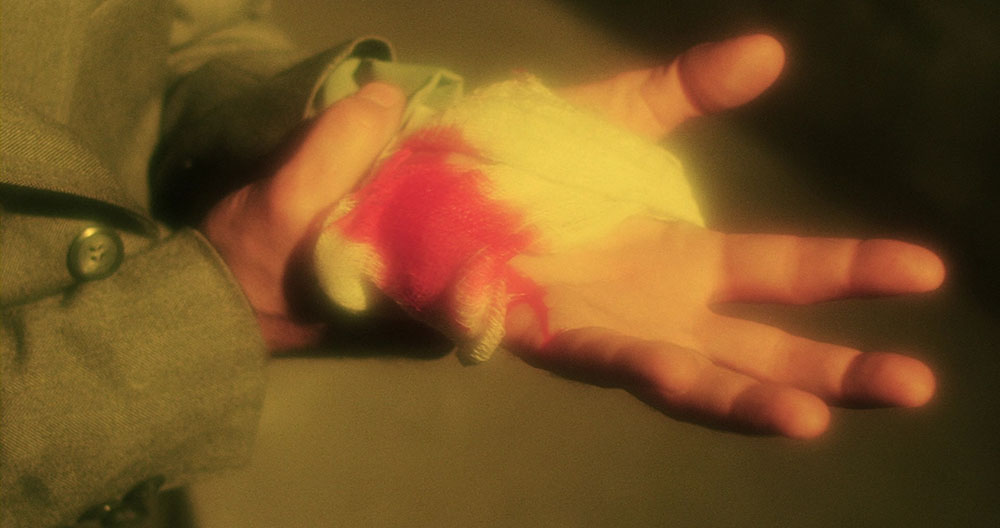 New York City is positively alive with bustling, Technicolor traffic. Bicyclists. Snub-nosed taxicabs. Mod pedestrians showing off their finest denim, leather, and cable-knit sweaters. Then the shooting starts. Random passerby, random even within the frame, collapse. Blood stains polyester. Somewhere on a rooftop, a man with a rifle is practicing his aim. Why?

For most of its 90 minutes, Gold Told Me To is a police procedural. The detective du jour is Peter J. Nicholas, a properly guilty Catholic played by Tony Lo Bianco as an eleventh-hour replacement for Robert Forster. He wakes up every morning assuring his girlfriend that he’ll leave his wife as soon as he can, then stops off at church on his way to work so he can confess lying to her.

When the mass murders start piling up, all of them ending with meaningless deaths and the killer swearing God made them do it, Nicholas is just the pious soul to take it seriously.

The worst of Ebert’s ire was leveled at the movie’s seemingly interchangeable second act. Nicholas wanders from seedy apartment to seedy police department to seedy pool hall with nary an establishing shot in sight. It might take you a minute to find the rhythm, but it won’t take long.

God Told Me To plays a lot more verité than you might expect from a shoestring thriller about a possibly malevolent God. 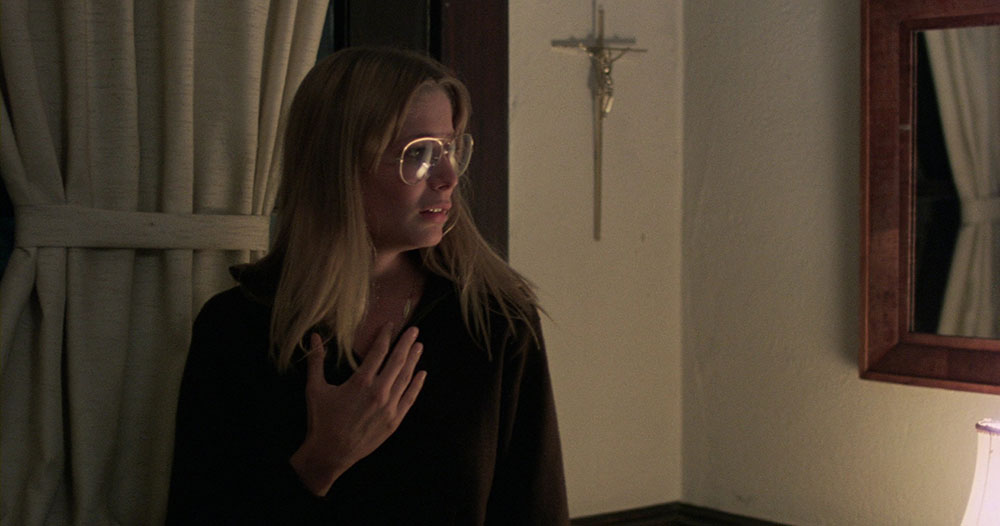 The best example, and its most famous sequence, unfolds with a shooting at a St. Patrick’s Day parade. A disturbed cop opens fire on the mayor and everybody starts running. That part feels unsettlingly authentic because at least some of it is — Cohen didn’t bother with permits when he didn’t need to, and sometimes when he probably did — but the genius is in how seamlessly reality blurs with recreation.

The thrill is in never knowing the difference, and that uncanny tension spills over into even the quietest exchanges between husband and ex(ish)-wife.

Larry Cohen never took a premise for granted and never sold them short in the execution. As the crime wave gets weirder and anonymous tips get creepier, ‘God Told Me To’ shifts gears into a metaphysical drama. What is God? Where did he come from? Why did he choose the holy men he did?

The answers are pure, straight-faced pulp.

But it’s the tougher questions, the ones asked specifically and off-handedly by the mortals staring down a potential second coming, that make God Told Me To a worthwhile watch for the devout. 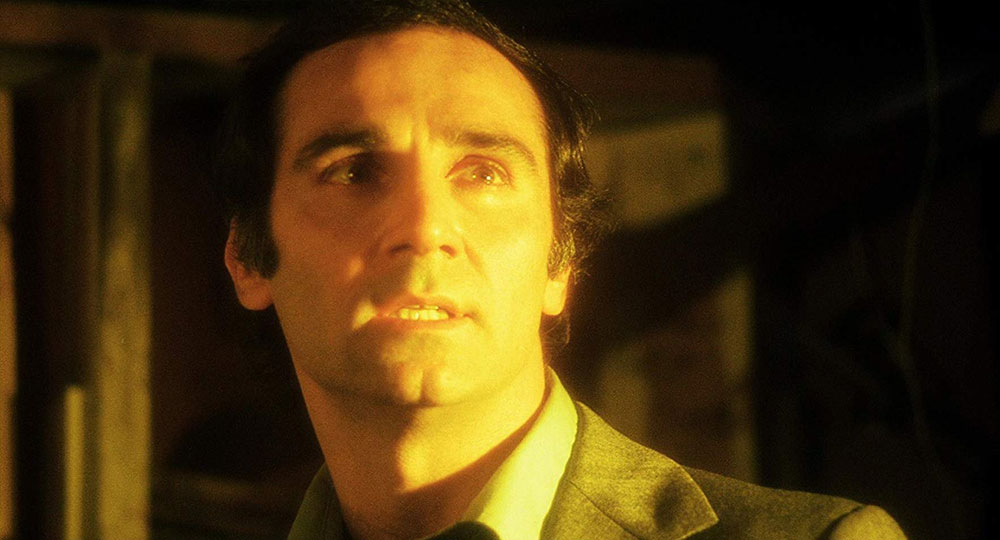 At a top secret board meeting of this God’s stuffed-shirt “disciples,” one laments the next inevitable tragedy.

“Can’t he communicate by another media besides violence?”

But he’s quickly corrected by a colleague who knows his Old Testament:

“The only way the Lord has ever successfully disciplined us is through fear.”

That’s where the God Told Me To lives, in the half of the Good Book where faith was tested on a divine whim. 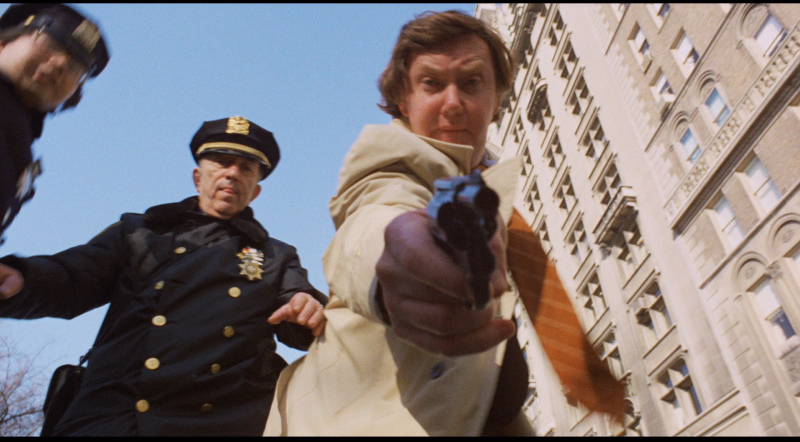 Abraham commanded to kill Isaac. Noah told to build a boat or let all intelligent life on Earth drown with him. Trembling. Suffering. Fear. Cohen admitted he wrote the script based on his shock at the ruthless, careless cruelty of the Old Testament God, and it shows in every pointlessly broken soul.

When Nicholas questions an old man about a naked woman he drove home some twenty years prior, the old man tells him what he remembers, but also adds how grateful he was that she didn’t accuse him of rape. Another woman with a similar story mostly remembers how nobody believed her, and she would’ve committed suicide already if it wasn’t a mortal sin.

Everybody suffers in a city where innocent bystanders fall dead in the crosswalks on a day like any other. “Life doesn’t matter,” says a man who killed his entire family for this newly talkative God, “not on this Earth.”

The only one who doesn’t seem to be suffering is Nicholas, who never even fell off his bike as a kid, so he goes to church every morning to make himself suffer. Such is faith in God Told Me To. 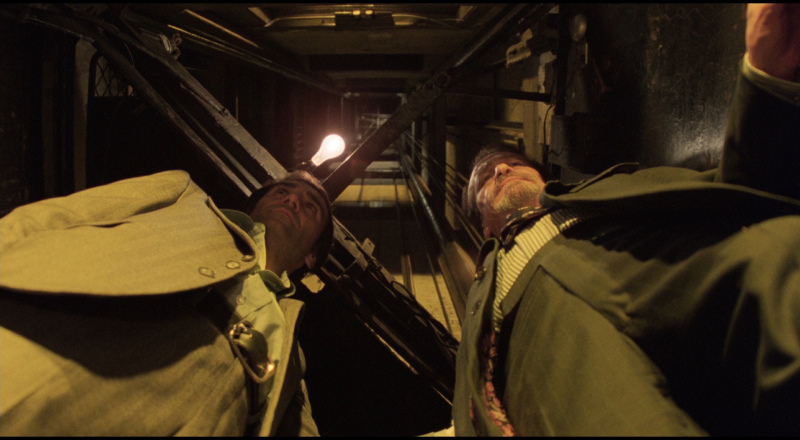 Some of the run-and-gun cinematography walks a fine line between shaky and sloppy, but that’s hard to hold against anybody when it’s all a dirty love letter to a New York that no longer exists — and nobody shot like Cohen when it did.

The endless interviews strain the limits of Tell-Don’t-Show, but also ground the procedural realism of what other filmmakers wouldn’t take seriously in the first place. The gonzo revelations steer away from the Bible toward another book entirely, but it makes for engaging schlock, and the very end sticks its landing.

Years after its release, Larry Cohen was approached about a remake from a French filmmaker who was obsessed with it. For whatever reason, nothing ever came of it, and Cohen didn’t look into the filmmaker’s other work.

Only later did he realize he was approached by Gaspar Noe, director of Climax and Irreversible, about remaking God Told Me To. 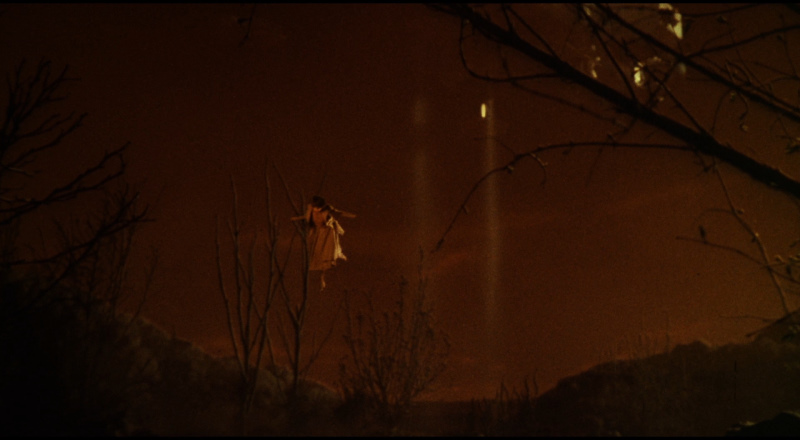 Not bad for a low-budget thriller about divinely motivated mass shootings.

Much like the holy text it’s playing with, God Told Me To will mean something different to everybody that looks at it. But you won’t soon forget its finer, meaner points.