WTF! is a commendable horror slasher with a few psychological twists 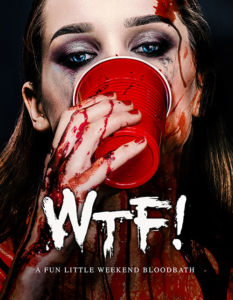 Directed and co-written by Peter Herro, the comedy-horror film WTF! might surprise you with its expert special effects, psychological complexity, and robust “go for broke” acting from its dynamic young cast.

While the film, which is more goofy than scary, often falls victim to poor dialogue and stock characters, WTF! still provides an inspired, campy horror experience with its bursts of gruesome energy and its closing twists and turns.

At the start of the film, Rachel (Callie Ott) and her friends decide to celebrate spring break at a cabin in the middle of the woods. Jacob (Benjamin Norris) assures everyone that the remote location is safe and that they are sure to have a good time—as long as there is enough beer, pot, and sex to go around. While Bonnie (Andrea Hunt) and Lisa (Sarah Agor) remain skeptical, and Rachel’s obnoxious boyfriend Sam (Johnny James Fiore) continues to be a thorn in Rachel’s side, the group makes the collective choice to go and sets out for the trip.

In addition to this generic set-up, one of the early problems with the film is that none of the characters, except perhaps for Rachel and Bonnie, are that likable; more to the point, they all appear to detest each other—not a line of dialogue goes by without one insulting the other, often in cruel and misogynistic ways.

Making matters worse, the dialogue is rarely clever or funny; it’s mostly sophomoric, frat-house humor that contributes little to the plot. WTF! would have been more entertaining had Herro’s script (co-written alongside Adam Buchalter and Christopher Centanni) cut to the action and slayings a bit sooner, because in these areas the film picks up speed and becomes quite enjoyable.

Rachel has an intriguing backstory: years earlier, all of her friends were murdered in a brutal massacre (bits and pieces of which the audience sees in frightening, gory flashbacks), and Rachel remained the only survivor. While her current group of friends knows not to talk about the killings, we immediately begin to question when and how Rachel’s psychosis might manifest in the cabin.

After a day of skinny-dipping, beer-drinking, and pot-smoking, the dead bodies start piling up, with each victim being dispatched in viciously creative ways.

Here, WTF! successfully transforms into a classic slasher who-done-it and becomes a perverse little thrill to watch. The kills are suspenseful, bloody, and fun, and the cast embraces the insanity of the plot with a manic spirit that is infectious (two particular murder sequences are reminiscent of Martin Scorcese’s ‘Cape Fear’ and Meir Zarchi’s ‘I Spit on Your Grave’, so that should give audiences an idea of how brutal WTF! becomes as it reaches its resolution).

Although not totally shocking, the ending twists of the film were effective and psychologically layered. And in a delightful surprise, even the closing credits offer further insight into both the title of the movie and the motivations of its diabolical killer.

Herro’s WTF! is definitely worth a one-time watch, but even more exciting is the promise of what is to come from this production team.

The talented actors, the gory special effects, the creepy set-pieces, and the driving suspense are all in place—with a smarter and more original script next time around, Herro and his crew will be able to leave a more lasting legacy behind in the world of horror cinema.