Posted by:
Tags:  Alann LeVierge let her out Nina Kiri women in horror

Let Her Out is a unique and chilling horror film with the perfect balance of drama and scares, wonderful effects and powerful performances. 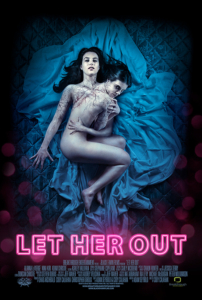 After a traumatic accident, a bike courier named Helen begins to experience horrific hallucinations and night-terrors. She soon learns that a benign tumor is actually the remnants of a lost twin that was killed in utero. As the vanished twin begins to manifest itself inside her, Helen begins to act out in psychotic episodes during blackouts as her sanity, life begins to deteriorate and her evil twin begins to appear.

The film has a very dark opening scene lit by the lonely red and blue fluorescent lighting of a motel sign. The shadows from the dim lighting punctuates the hopelessness and evil on display as a prostitute, done with work for the night, gets raped by an unknown man.

Fast forward to 23 years later and we meet Helen, the child born from the pregnancy that resulted from the rape. The incident that happened to her mother (which led to her suicide) weighs heavy on Helen. Her character shows the darkness that can surround life, and how it can be no fault of the person it surrounds.

After Helen’s accident and stay at the hospital, she never appears truly comfortable. It is at this point that she learns of the twin sister she lost while her mother was pregnant with them in a condition called Vanishing Twin Syndrome.

Whether it be inner demons or our own ghosts from the past, our doubts and fears can conjure up the darkness inside of us.

In Helen’s case, the sadness she carries is directly linked to the terrible experience her mother had 23 years earlier. Centering the story around Vanishing Twin Syndrome and the approach the film takes is a welcome and unique take on a form of possession. In addition to being truly frightening, this approach adds a true sense of drama to the horror elements of the story — and raises the stakes by having Helen pitted against her literal other half.

During one of her blackouts, Helen’s twin writes “I am coming” on the bathroom mirror. When Helen comes to and sees the ominous note, she knows her twin is not “coming”, but, in fact, already there.

Just as the opening scene suggests, Let Her Out is a dark film with heavy themes about the fragile complexity of life, the human mind and the body as well.

The lighting from the opening scene is the lighting in Helen’s room and reappears whenever her twin shows up in her to wreak horrible havoc, underlining the important connection between that incident and what happens to Helen throughout the film.

LET HER OUT  is an all out awesome movie with wonderfully gory effects and strong performances from the whole cast. Alanna LeVierge is spot on in her careful portrayal of the damaged Helen as well as her terrifying twin. And Nina Kiri is fantastic as Molly, the caring friend who grows both scared of and scared for Helen.

The film is old school horror: dramatic, visual, scary and a hell of a good story with a big and bloody final act. Watch it now in iTunes, it deserves to be seen.