Remembering the Legend of Dick Miller

Earlier this year, we lost a legend; Famous character actor Dick Miller died at the age of 90. Our writers look back at some of his most iconic roles.

It was a sad day when I read of the passing of Dick Miller. I had only met him once, but I felt like I saw him nearly everyday at my house. With nearly 200 credits under his belt spanning over 6 decades… it is pretty hard to not miss the guy. Yet when I lamented to my friends and family about the loss of this legend most of them just said, “Who?” While Miller had a ton of roles, he only took the lead a few times. His forte was in character acting… and boy, was he great at it!

To celebrate his life and illustrious career, I’ve asked a few of my fellow writers at Morbidly Beautiful to join me in sharing their favorite Dick Miller roles. (Richard Tanner) 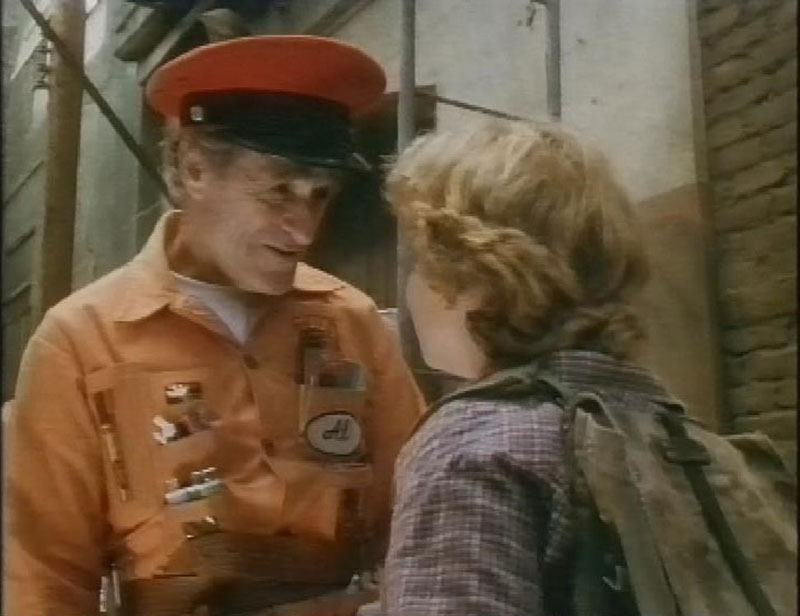 As a kid I loved Eerie, Indiana! The creepy little kid show that was all about exploring the weird and unusual. My first memory of Dick Miller is here.

Here I am eating cereal and watching my favorite show — and out pops this cigar smoking, fast talking man who hates everybody. In the this surreal world where The Bureau of Lost exists and garbage men walk around stealing items to help the economy, Dick Miller took it seriously. He played that character tough as nails, an everyday working stiff… even if that stiff worked for a conspiracy.

While Miller stood out for me in this role, it was a little Easter egg that made me never forget it. At one point the director, Joe Dante, decides to pan the camera over a pod from Invasion of the Body Snatchers… the same one from Gremlins 2… another Dick Miller film. 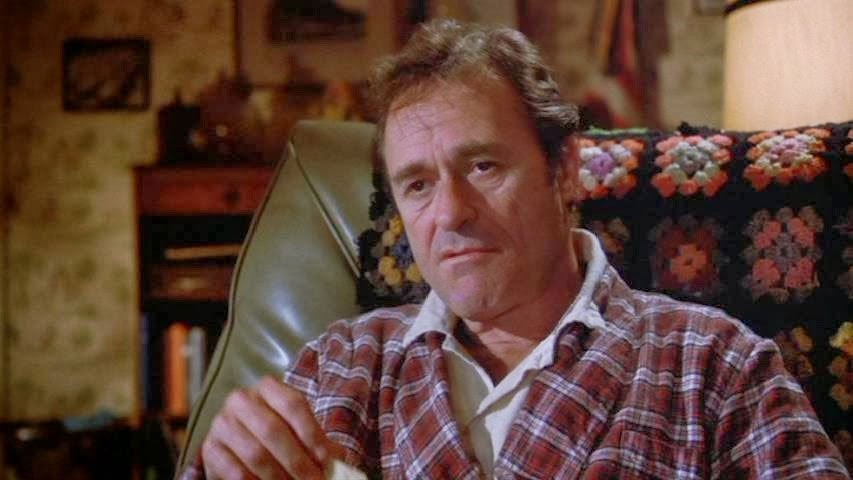 If you haven’t seen GREMLINS in a while, there are a few key scenes that will jump out at you: the spooky sight of thousands of monsters at a movie theater, Gizmo’s otherworldly song, the disgusting pop of a radioactive critter in a microwave. But GREMLINS is as much about small-town life as it is about the creatures that threaten to destroy it. And Dick Miller, in his role as Murray Futterman, is the heart and soul of this town.

Kingston Falls is a community on the decline. Many are out of work, and Billy (Zach Galligan), our lead, is supporting his family with his job at the bank. Futterman, like the rest of their town, hasn’t been the same since he lost his job. He drinks too much at the local bar and has to be coaxed out of the driver’s seat. As the next-door neighbor to Billy, Futterman is a xenophobic, blue collar local that acts as a foil to Billy’s wide-eyed optimism.

Many of the characters in GREMLINS fall into tropes. There’s your affably incompetent father, your money-grubbing spinster, your sleazy bank exec. All little pops of local color that add to the feeling of a struggling community. Kingston Falls is like Bedford Falls, the town in IT’S A WONDERFUL LIFE (It’s notable that Billy’s mother, watching the film calls it “a sad movie”).

In both films, the cast is amazing. Each of the tiny roles add brightness and depth to GREMLINS, and no one more so than Murray Futterman. Dick Miller, with his craggy face and large, sympathetic eyes, lends a pathos to his comedic role. Dante knew enough to give Miller the explanation of the movie’s title, and Miller was one of the precious few brought back for the movie’s sequel. Dick Miller has a face you recognize as an everyman, which makes it that much more cringe-inducing when he’s put into peril, a sense of irony and quirkiness that makes us recognize him as a member of our cinematic family.

Though we may not have known his name, we knew his face. It was the face of a friend. 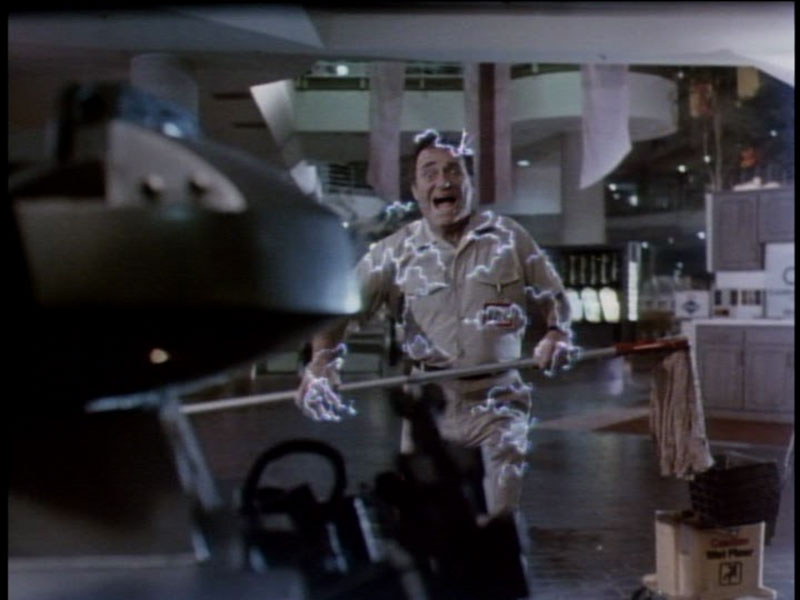 By The Angry Princess

1986’s Chopping Mall is honestly one of my favorite guilty pleasures — pure 80s cheese in the best possible way. The plot is ridiculous. A high-tech security system is installed in a shopping mall, consisting of three robots that patrol the mall and are programmed to detain after hours intruders who don’t have the proper identification. Of course, the robots malfunction and transform into killing machines, targeting a group of college kids just looking for a little fun. The kids, which include 80s scream queen icons Kelli Maroney and Barbara Crampton, are having an after-hour party at a furniture store in the mall. While the group fights to survive the night, the robots pick them off one by one.

Chopping Mall was made at a time when fear of technology was rampant. As advancements were made in the world of home computers and personal electronics, people naturally worried about what such “advanced” technology could do if we lost control of it. It was also made at a time when shopping malls were extremely relevant and the center of the social universe for young people.

While it hasn’t aged well as a horror film, Jim Wynorski’s Chopping Mall is immensely fun, never taking itself too seriously. While it flopped upon initial release, the film has gone on to achieve cult status. This is due in no small part by the inspired casting, which includes a wonderful cameo from Dick Miller.

In the film, Miller hams it up as an older version of Walter Paisley, his character from Roger Corman’s  A Bucket of Blood (and a character he has played many times since). Miller, a tough-talking mall janitor, receives a fittingly iconic and unforgettable death scene at the hands of one of the muderous Killbots. Sure, the special effects are not all that “special” by today’s standards. And sure it’s over-the-top and laughable. But that’s part of its enormous charm. Check out scene-stealer Miller meeting his electric demise in the clip below. 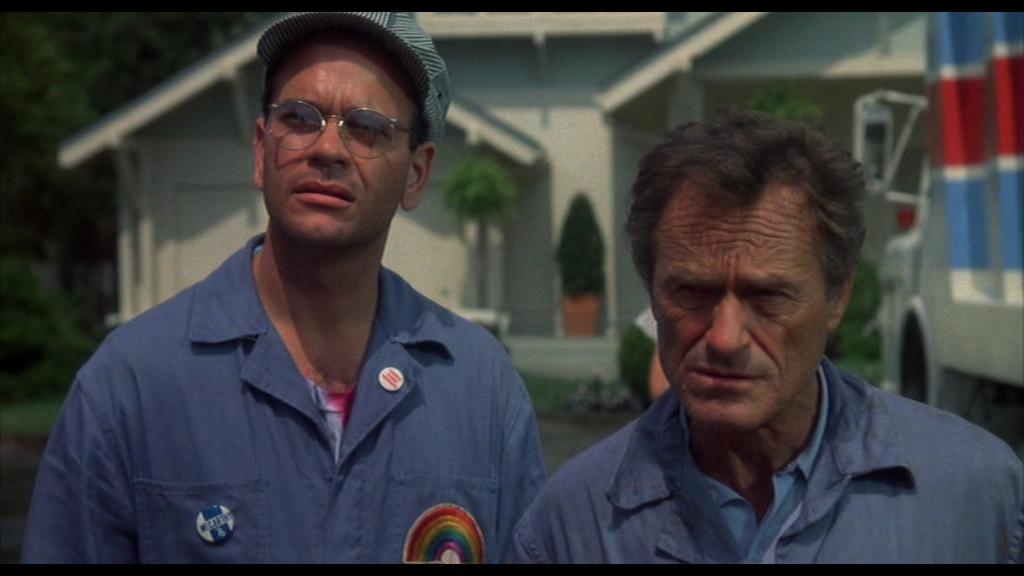 The ‘Burbs opens with a 250,000-mile zoom, from the MCA- Universal sponsored Earth into the nuclear ant farm of suburbia, landing on a dead-end street somewhere outside Des Moines. Coming from director Joe Dante, it’s as much scene-setting as a rebuke of his Reagan-era Rear Window: these people may be microbes on a cosmic scale, but their universe ends at the stop sign.

The movie never leaves the neighborhood, and neither do most of the characters. Until the finale, not counting the new neighbors, there’s only one intruder — Dick Miller. He rolls into town already annoyed with his fellow garbageman, bonus Dante-regular Robert Picardo. Miller has no time for his colleague’s seminar on healing crystals; there’s a league game that night. He has even less time for the hysterical locals pulling trashcans right out of his hands, dumping them in the street, and expecting him to clean it up out of occupational pride.

But as the bathrobed co-conspirators shake sense in and out of each other, spilling lurid (alleged) details about the Texas Chain Saw expats next door, the garbagemen watch in staggered silence. At the earliest convenient break in the paranoid ramblings, Dick Miller announces they’re getting the hell out of Dodge. But Picardo is invested, seduced by the near-sighted soap opera of this suburb. Dick drags him away, and lays the whole movie plain with a single sentence:

“I hate cul-de-sacs; there’s only one way out and the people are kinda weird.”

That one line, in that one scene, is all the opinion we get from the rest of the civilized universe. To another actor, it might’ve seemed like a throwaway part, just a grumpy garbageman. But that’s why Dick Miller was That Guy. Whenever he showed up, he did exactly what needed done, better than anyone else could’ve done it, no matter how much doing needed done.

A recent video tweeted by writer-director-editor Mike Williamson (@WilliamsonMike_) shows rough footage from one of the camera setups on this scene. The slate claps in front of the actors. Joe Dante gets everyone at attention. But Corey Feldman is still goofing off, to the non-reaction of his castmates. Dick Miller, who doesn’t even have a line from this angle, stops him cold by saying, “Shut the fuck up, kid; we’re trying to do some acting here.” I’ll miss That Guy. 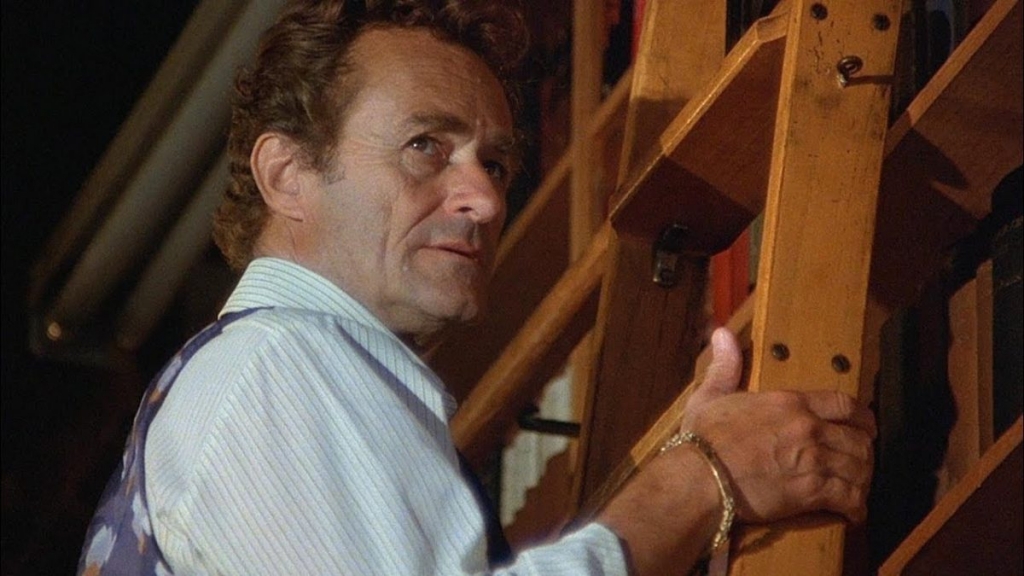 Dick Miller has had an amazing career in film, but for me I will always remember him for his cameos in Joe Dante’s movies. Whether it be a delivery guy, security guard or just a neighbor, he always makes an impression. And if you have seen any of