Video Rewind tells the BTS stories of the video store era, 1 rental at a time! Press play and adjust your tracking for 1990’s “Dick Tracy”. 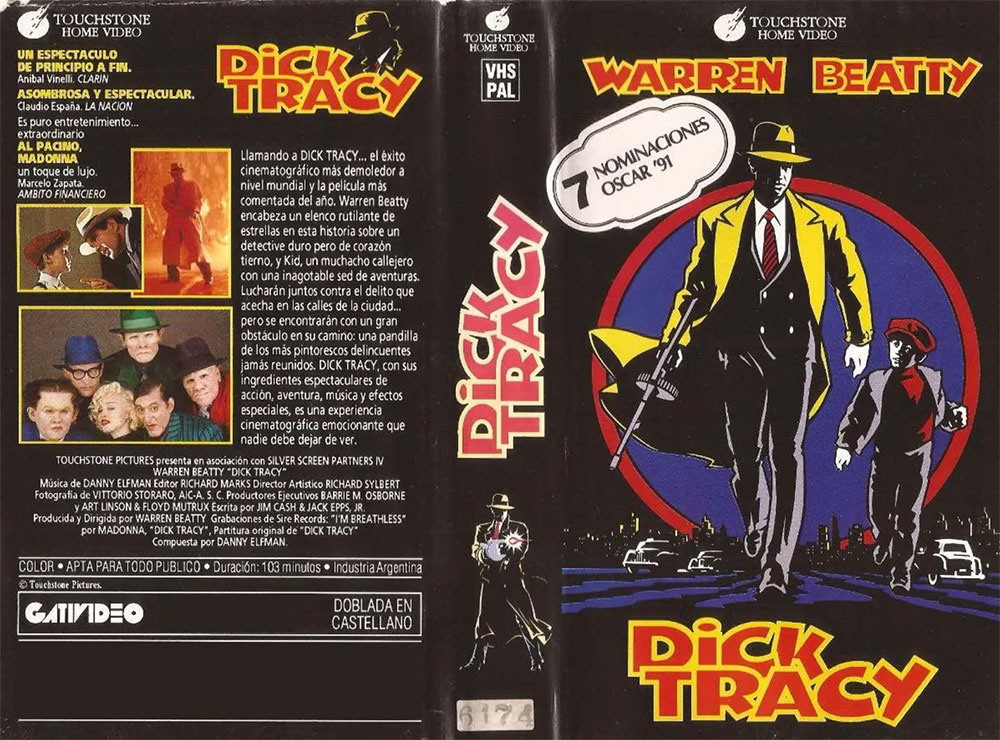 The glitz, glam, and excitement of Hollywood descended upon the small town of Woodstock, Illinois in the spring of 1992. The charming town square with its brick roads and turn-of-the-century architecture was the perfect setting for filmmaker Harold Ramis and his romantic comedy starring Bill Murray, Andie MacDowell, and a little, furry weatherman. Groundhog Day found its Punxsutawney, Pennsylvania in Woodstock, Illinois, and each year the locals continue to celebrate their connection to the now-classic comedy with a week-long Groundhog Day celebration in February.

Overlooking the yearly festivities from a second-story window in the Old McHenry County Courthouse on N Johnson St. is a 1,000 square foot room that housed The Chester Gould-Dick Tracy Museum. Sitting above the Public House restaurant (the bar area is featured in Groundhog Day), the museum was founded in 1991, in part funded by a benefit screening on June 13, 1990 (a day before its world premiere) of the motion picture Dick Tracy starring and directed by Warren Beatty. The museum honored longtime Woodstock, Illinois resident Chester Gould and his hard-boiled detective comic-strip character Dick Tracy that he created in 1931.

Although the museum enjoyed success throughout the 1990s, unlike Groundhog Day and its yearly celebration, it didn’t have the same staying power and was forced to close its doors in June of 2008. Museum secretary Jeff Kersten had always been “befuddled” by the town’s fascination with Groundhog Day and saddened by its seemingly lack of interest in one of its own, saying “the thing that has an actual connection to the town — Dick Tracy — has gone by the wayside.”

The big-budget, Hollywood movie of the same name was destined for the same fate. 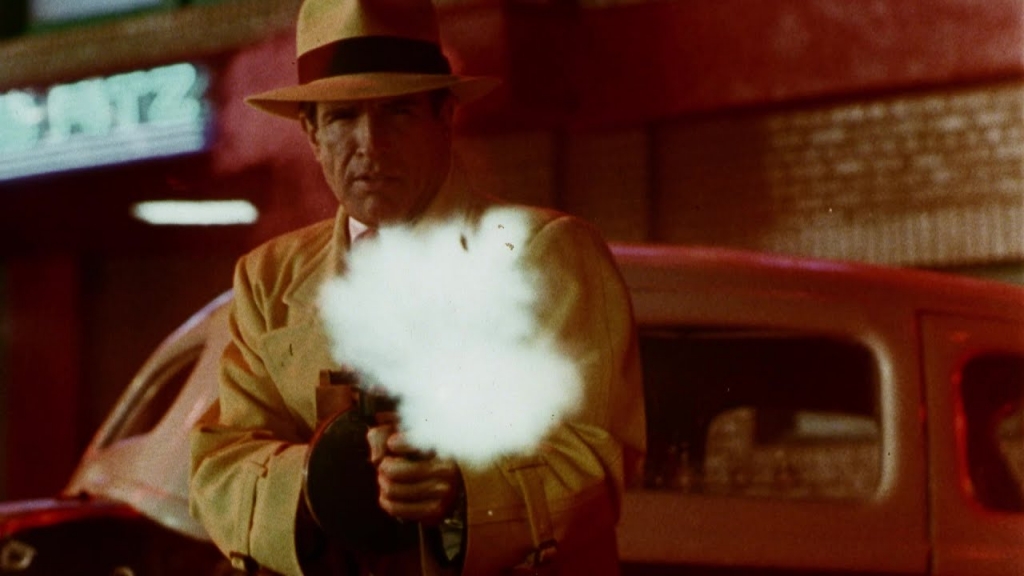 A tent-pole summer release with an all-star cast, Dick Tracy was primed to be the biggest film of 1990, but has since fallen by the wayside and barely registers in the comic book movie conversation. The production value and execution of Warren Beatty’s Dick Tracy is anything but cynical filmmaking, and it deserves a better legacy.

In the 30 years following his first film role in Splendor in the Grass opposite Natalie Wood in 1961, Warren Beatty had been a continuous force in Hollywood. A filmmaking swiss army knife, by 1982 Beatty had racked up an impressive 11 Oscar nominations (more would come) for acting, producing, writing, and directing, including winning Best Director in 1981 for Reds. Beatty had been interested in a big-screen adaptation of Dick Tracy since the mid-1970s when producer Michael Laughlin (Two Lane Blacktop) held the rights to the character.

Switching hands a few more times, the Dick Tracy project ultimately ended up at Paramount under the eye of Michael Eisner and Jeffrey Katzenberg. Universal agreed to come aboard as a co-producer, and Jim Cash and Jack Epps, Jr. (who would go on to write Top Gun) were hired to write a script. The 2 studios then attempted to attach several high-profile directors to the Dick Tracy motion picture, including Steven Spielberg, John Landis, Walter Hill, and Richard Benjamin. Landis left the project after his horrific mishap on Twilight Zone: The Movie left Vic Morrow and 2 young actors dead, and Walter Hill stepped away because his gritty vision clashed with Beatty’s stylized, comic-strip vision after he became attached to star.

Beatty said there were two Dick Tracy cartoon panels that instantly convinced him he had to make a film based on the comic strip. One was Tracy punching a bad guy, knocking his hat off, and saying, “take that, you cockroach!” The other was Tess Trueheart, Tracy’s girlfriend, standing with her hands on her hips saying, “Dick Tracy, are you asking me to marry you?” Upon seeing these, Beatty thought to himself, “I’ve got to make a movie of this, this could be fun,” adding “and it was. It was the most fun I ever had making a movie.”

Having the reputation of a perfectionist and with the history of his many-faceted approach to filmmaking, Beatty decided to purchase the rights to Dick Tracy for himself, including the screenplay written by Epps and Cash. Now in a producer role, Beatty tried to get Bob Fosse and Martin Scorsese to direct, but ended up taking the directing reins himself. “I think I’m an ok director,” Beatty said. “I’d prefer to have somebody else. But in a pinch, I’ll do it. This was a pinch and I did it.”

Beatty would now not only star as the yellow-coated detective (Clint Eastwood, Harrison Ford, Richard Gere, Tom Selleck, and Mel Gibson were all considered for the role), but he would produce and direct the film as well.

In his pinch, Beatty would also tailor the script a bit more to his liking, especially rewriting a lot of the dialogue with One Flew Over the Cuckoo’s Nest writer Bo Goldman. As director and with the new, polished script, in 1987 Beatty took Dick Tracy to Michael Eisner, now CEO of The Walt Disney Company, and Jeffrey Katzenberg, who oversaw Disney’s motion picture development. Eisner had worked with Beatty before as president of Paramount during the production and release of Reds.

In addition to Beatty, an all-star cast was assembled when filming began on February 1, 1989.

Bringing the villains to life would be Al Pacino as Big Boy Caprice, Dustin Hoffman as Mumbles, William Forsythe as Flattop, and appearances by James Caan and Paul Sorvino (after a reported 50 takes were needed by Beatty in one of the two scenes that Gene Hackman appeared in Reds, the actor declined to appear in Dick Tracy). Charles Durning as Chief Brandon and Dick Van Dyke as D.A. Fletcher rounded out the cops, with Glenne Headly as Tess Trueheart (Dick Tracy’s girlfriend), Charlie Korsmo as The Kid, and Madonna as sultry club singer Breathless Mahoney rounding out the cast.

Keep an eye out for Kathy Bates in a small role as a stenographer right before she became a star that same year in Misery, for which she won the Academy Award for Best Actress. 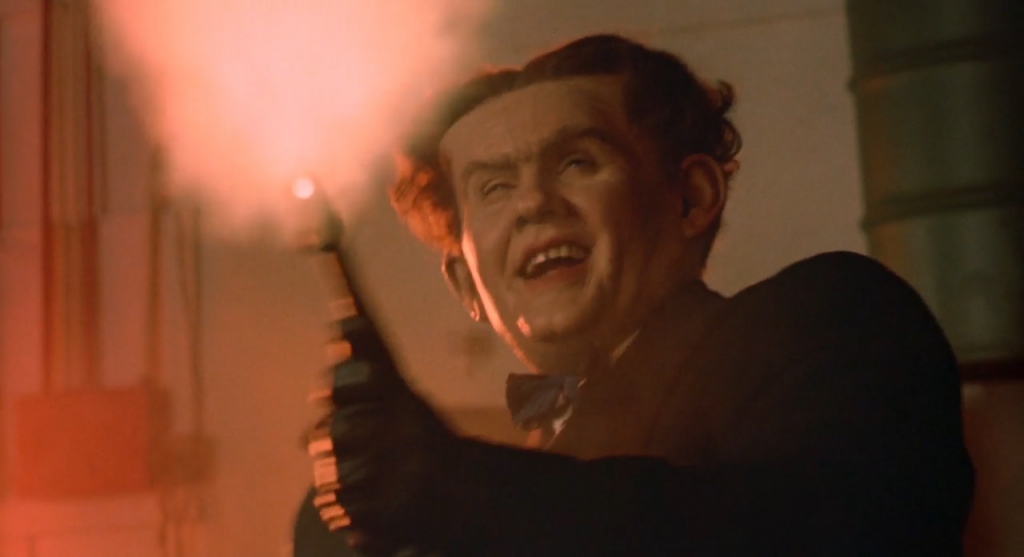