“The Banana Splits Movie” delivers with creative kills and solid practical effects, but weak writing keeps it from being much more than a novelty act. As a young boy of the 1970s, I turned my television set to reruns of shows such as Batman, The Adams Family, The Munsters, and The Banana Splits. My memories of those shows are fond, and my forty-something year face has to repel wrinkle-causing smiles created by my memories of this time in my life. Watching these shows, along with The Twilight Zone, Star Trek, and spending my Saturday afternoons watching Hammer Horror films, could be why I developed into a horror fiction writer with an appreciation for the corny side of a tale.

Produced by the famous cartoon creators, Hanna-Barbera, and directed by the likes of Richard Donner (Superman) and Tom Boutross, The Banana Splits Adventure Hour originally aired from September 1968- September 1970, running on the NBC network Saturday mornings. 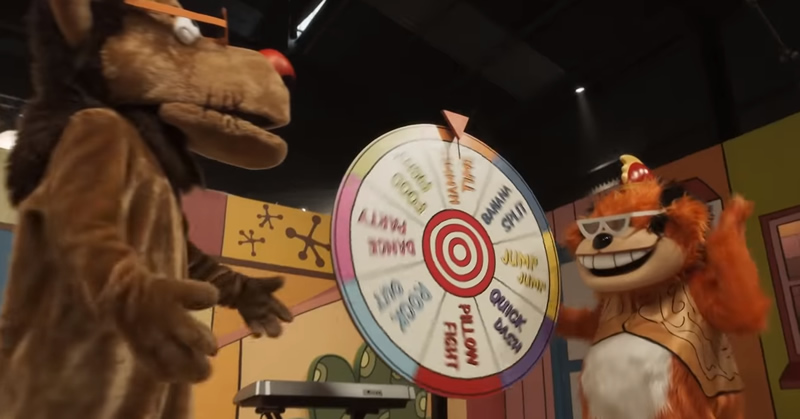 The show was Hanna-Barbera’s attempt to cross animation with live action characterizations. The show boasted bright colored sets, happy overtures, and always ended with the Splits having a “Rock Out” session with the audience.

Overall, The Banana Splits was a children’s variety show that was short lived and in the grand scheme of modern culture, a fairly obscure television show reference for most outside of my age bracket. 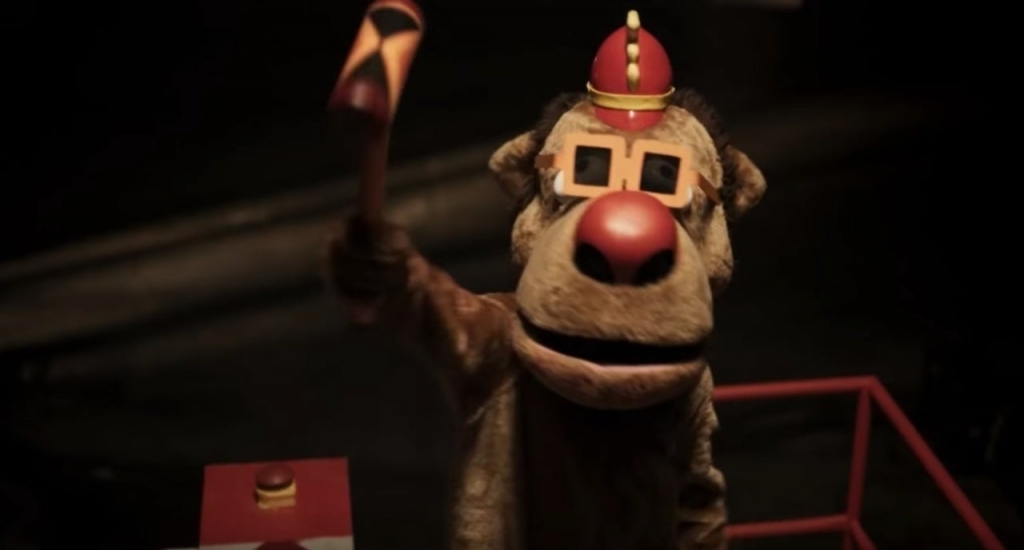 To take a children’s show that is now some fifty-one-years removed from originally airing and twist it into the horror genre was daring. Did the dare payoff?

The Banana Splits Movie, written by Jed Elinoffand Scott Thomas, and directed by Danishka Esterhazy, presents a nightmare like vision of the children’s variety show creating a devilish contrast to in nineteen-sixty-eight.

The film follows a young birthday boy, Harley Williams (Finlay Wutjak Hissong) and his family, who attends a live recording of the Banana Splits show. Several audience members receive an opportunity to stay after the show taping to meet the Splits by having stars on the back of their entry tickets. Though Harley does not have a star on his ticket, his older brother Austin (Romeo Carere) finds a way to get the birthday boy and family to stick around for meeting the Splits.

The show is canceled prior to the taping by Andy (Daniel Fox), the new vice president of programming for the network, prompting the Splits to go from fun loving puppets to murderous monsters with one aim…to keep the show going on forever. 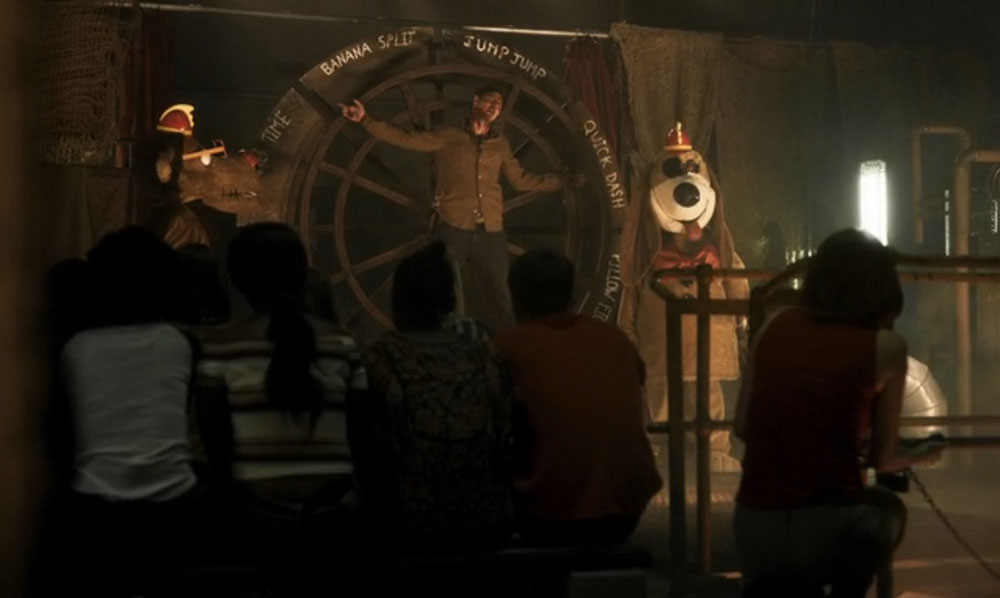 Though the ominous tone for the film is set from the opening scene, the buildup to decent horror action is slow.

The first kill comes after the thirty-minute mark of what is only an eighty-six minute film. However, that delay works well — setting up the first kill of the film. Although it is a predictable demise, the originality and brutality of the kill was great and caught me off guard.

From this point forward, the film’s pace quickens and evolves into a dark adventure in gore. 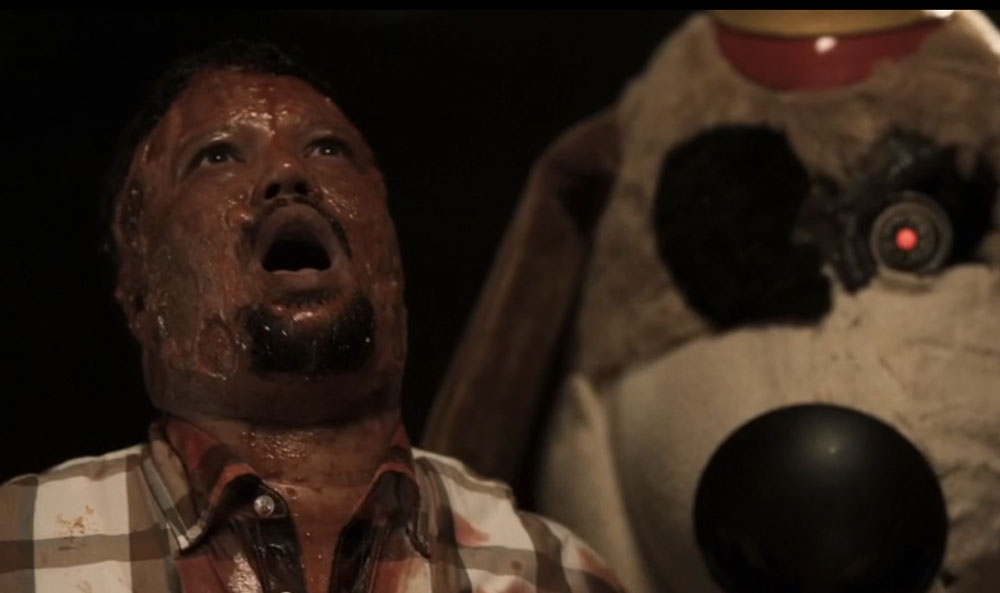 The film’s visual practical effects are a refreshing reprieve from the usual CGI that plagues so many films today.

This use of practical effects harkened back to the classic horror films of the eighties.

The sets are  well done, presenting a dark feeling that overshadows the childish foundation from which they were created. The musical score created by Patrick Stump (Fall Out Boy) complements the sets and the story well, making sure the ominous tones to the film prevail throughout. 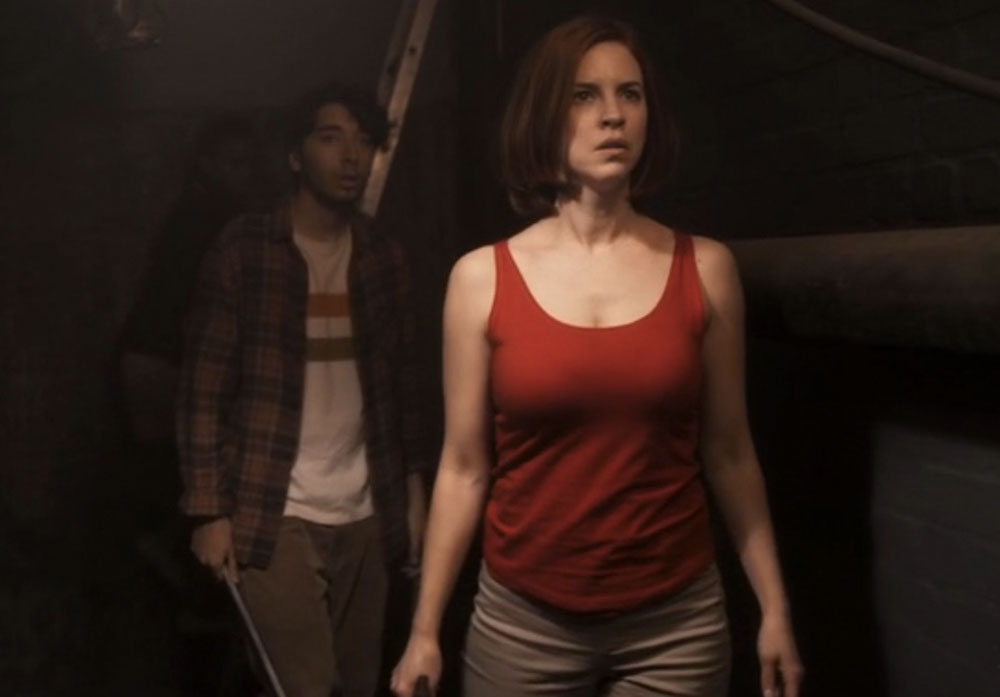 With everything I found entertaining about the original show, I was left wondering what the point is for this film?

The plot of the film could have had nothing to do with the Banana Splits. Any other show being canceled could have fit into the idea. I found it a stretch to use a children’s show from over fifty-years ago as the basis for the film, and it really limits the audience reach. If the filmmakers were not worried about the audience age group they reached, then why bother using the Banana Splits as the main characters?

This shows me the filmmakers were either targeting an above forty-something audience, or they were just looking to create a shock film based on a children’s show. If so, then why not use a modern children’s show as the blood gushing goodness behind such gore galloping madness? Using the Splits as horror characters seems more offensive than affectionate to my childhood memories, and I doubt I am alone in that feeling. 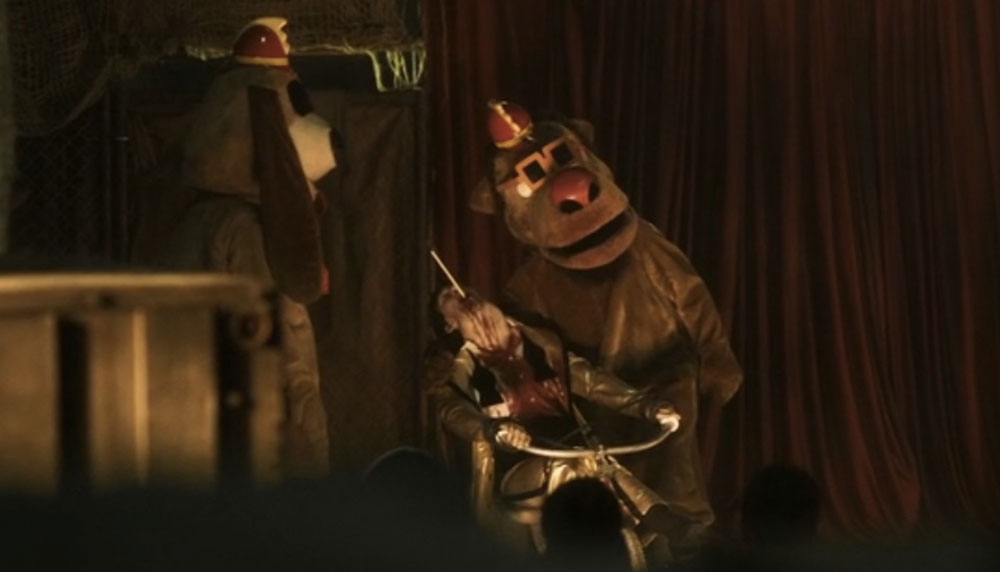 The film has too many antagonistic characters, most of which get killed off by the Splits.

It feels like the film creators did this in hopes to build sympathy for the Splits, but the execution of this theory falls dead.

Harley is a character we as viewers should want to see make it out of the film alive. But I had problems supporting his success in this dark adventure, as I found his demeanor more annoying than likable. 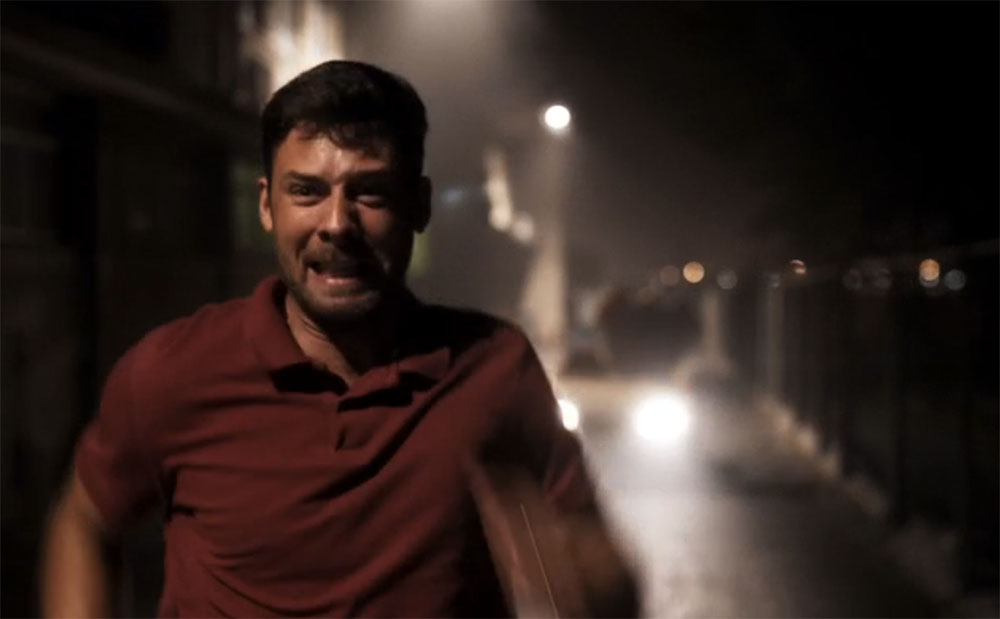 There are a few poor attempts at humor in the film, including a particularly a drawn out kill scene with Snorky running down Mitch Williams (the cheating husband/father we all want to see karma crack in half). I nearly turned the film off during this scene because of how ridiculous it was.

There was so much room for Mitch to escape the path of the banana car. I also wondered why Snorky was just sitting out in the Banana Splits car while all the other Splits were in the sound stage planning genocide? Yes, this kill scene could be an homage to how poor some classic horror film kill scenes are. But with the main tone of the film being as dark as it is, the writers should have left out the humor. 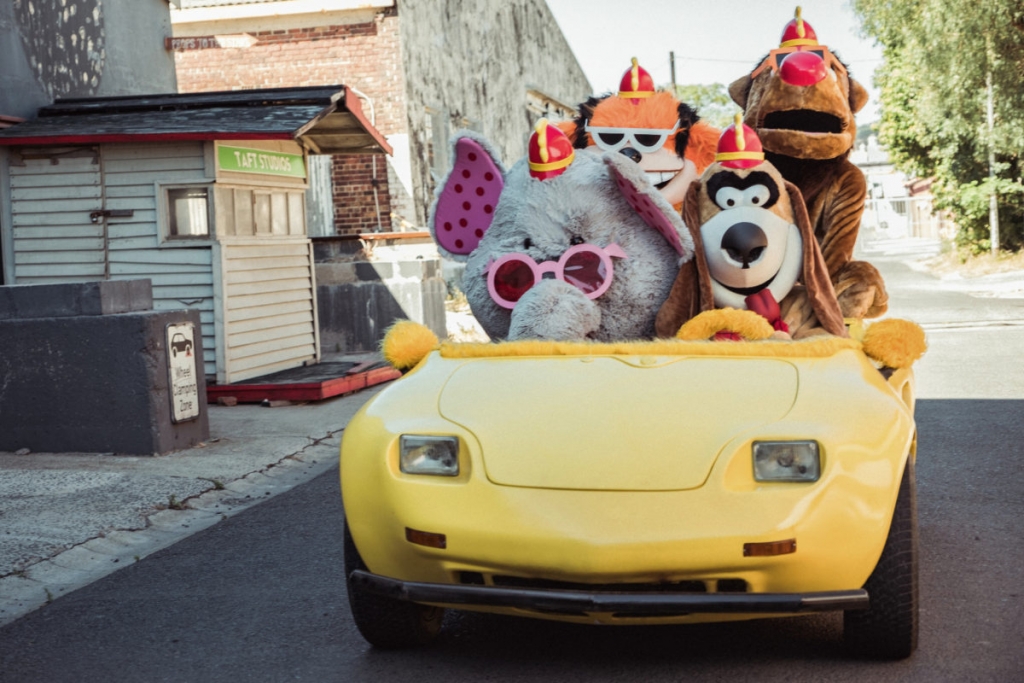 The laughs are not loud enough to be heard over the screams.

This scene is one of several throughout the film that left my wondering why the story and characters evolved as they did. You dig holes in the plot of your film? No problem. The Banana Splits Movie has you covered.

Another issue with the film is how the Splits function. The Splits are robots maintained by Carl, a mad scientist like creator and a keeper who downloads updates into the Splits programming. 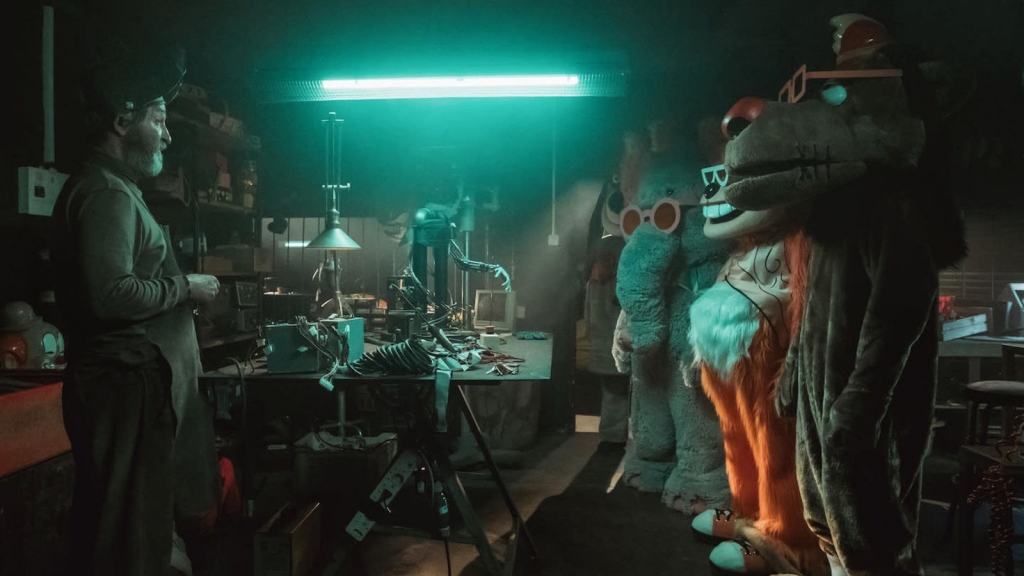 The Splits being computer programmed was a poor attempt to modernize them and made little sense since the original show was set long before programmable downloads. The programmable download idea is too close in theory to the re-make of Child’s Play released earlier this year, taking away from this film’s originality.

Computer operated robot puppets seeking vengeance for their show being canceled is too far-fetched for me to get behind, when it would have made more sense for the Splits to be four psychotic actors pissed off their show was canceled. Having Rob Zombie-like murderous nut cases going on a killing spree would have worked better than the programmable robot theory. 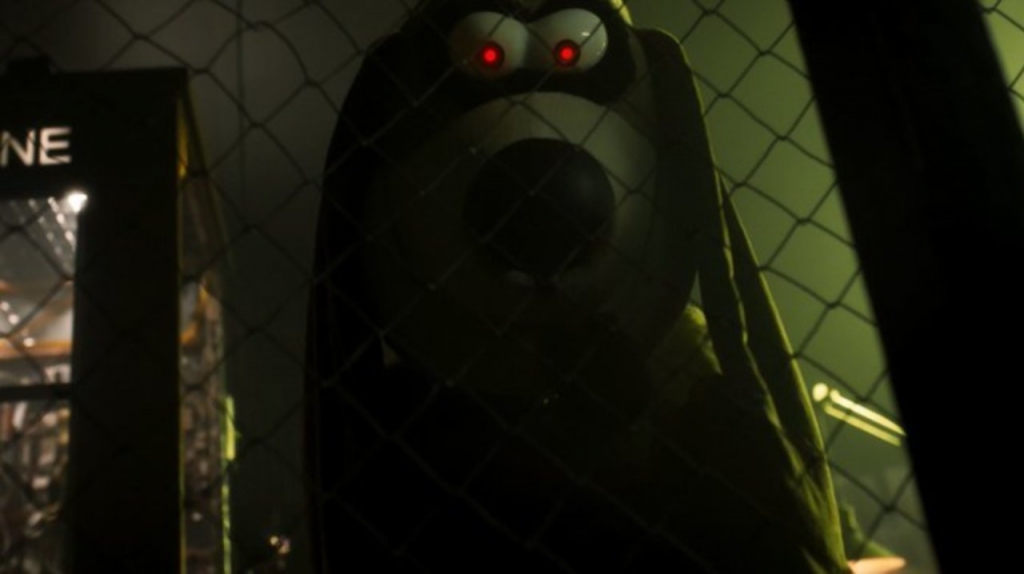 Overall, I enjoyed the attempt to create a dark vision of the Banana Splits compared to the original show.

The dark sets worked well. There was no holding back presenting brutality and gore in the kills. And I should say, the next-to-last kill in the film is beyond brutal, taking into consideration the perpetrators of the act.

However, the weaknesses in the plot, the poor motivation behind the Banana Splits becoming murderous robotic puppets, and the filmmakers relying on the gore factor to get the film over with audiences ultimately makes it fall a little short for me.