“CASTLE OF BLOOD” is a surprisingly sexual slice of Italian Gothic horror with enough atmosphere and homoeroticism to make up for its gaping plot holes. 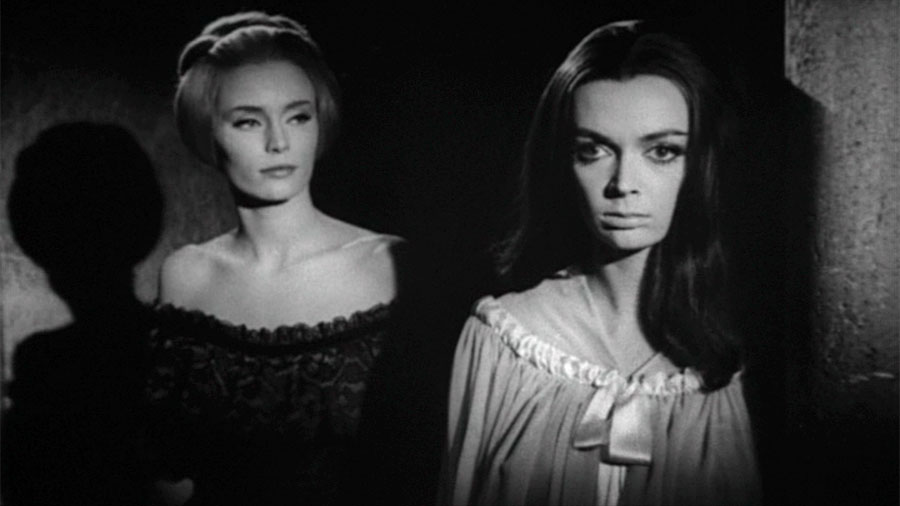 If I had to think of what my dream movie would be, it would probably involve Barbara Steele and lesbian vampires.

Alas, the closest thing we’ve got is Cronenburg’s Shivers — which isn’t a vampire movie at all, but Babs does play a lesbian — and Antonio Margheriti’s Castle of Blood, an example of the low budget Italian Gothic that (for better or worse) defined much of Steele’s career.

Castle of Blood is one of several Italian horror films that attempted to cash in on the success of the Edgar Allan Poe-inspired films that Roger Corman was making in America, especially The Pit and the Pendulum. Margheriti — or, perhaps more likely, the studio — apparently wanted to tie his film directly to Corman’s by inserting Poe himself into the story and taglining the film “Edgar Allan Poe’s classic tale of horror.”

The film isn’t based on any of Poe’s stories, nor does the infamous writer’s presence as a character have any real relevance to the plot. Margheriti tried to capture the essence of Corman’s Poe films, but all the atmosphere in the world couldn’t make up for slow pacing and gaping plot holes.

Still, that atmosphere makes the film, along with some juicy lesbian subtext involving Barbara Steele’s character, Elisabeth, and her very bitter ex-girlfriend, Julia. 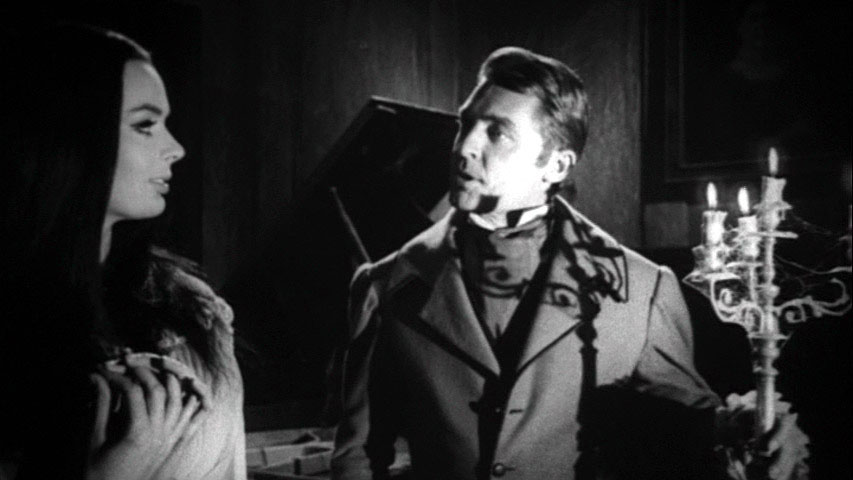 A broke journalist named Alan Foster — the obligatory boring male romantic lead — encounters Edgar Allan Poe in a London pub, and in exchange for an interview, takes a bet with a local lord to spend “the night of the dead” (All Souls’ Eve) in his supposedly haunted castle, a feat that no one has yet survived. Once there, Alan finds that the castle isn’t as empty as he’d been led to believe; he meets his host’s sister, Elisabeth, who takes an immediate liking to Alan and says her brother sent him to keep her company.

Eventually, Alan learns that Elisabeth and the rest of the castle’s inhabitants are dead, and on this night each year they return to relive their violent deaths. And each year they must claim another soul so that they can return again.

The plot sounds fairly solid and straightforward when you summarize it like that, but it’s actually pretty flimsy. We’re supposed to believe that Elisabeth and Alan fall deeply in love after meeting once, spending maybe five minutes together, and knowing literally nothing about each other.

But Julia comes onto the scene and shuts that shit down — or at least she tries to. She warns Elisabeth to stay away from Alan because he might learn their “secret,” something so terrible that Elisabeth fears Alan would “never be able to face” her if he knew. When Julia asks Elisabeth if she’s in love with Alan, Elisabeth responds as if she’s trying to convince herself that she is as much as she’s trying to convince Julia. “I need to be with him,” she says.

Julia then asks if Elisabeth really believes she would be happy with Alan; again, Elisabeth’s response is unconvincing, like she’s trying to force herself to believe that what she’s saying is true. But Julia knows the real truth: “You won’t be happy with any man.” Later, when Elisabeth returns to Alan’s room and they have sex, Julia listens outside, bitterly complaining that Elisabeth is “pretending to be something she’s not.”

Elisabeth is suffering from some major internalized homophobia and compulsory heterosexuality, and Julia has had about enough of it. 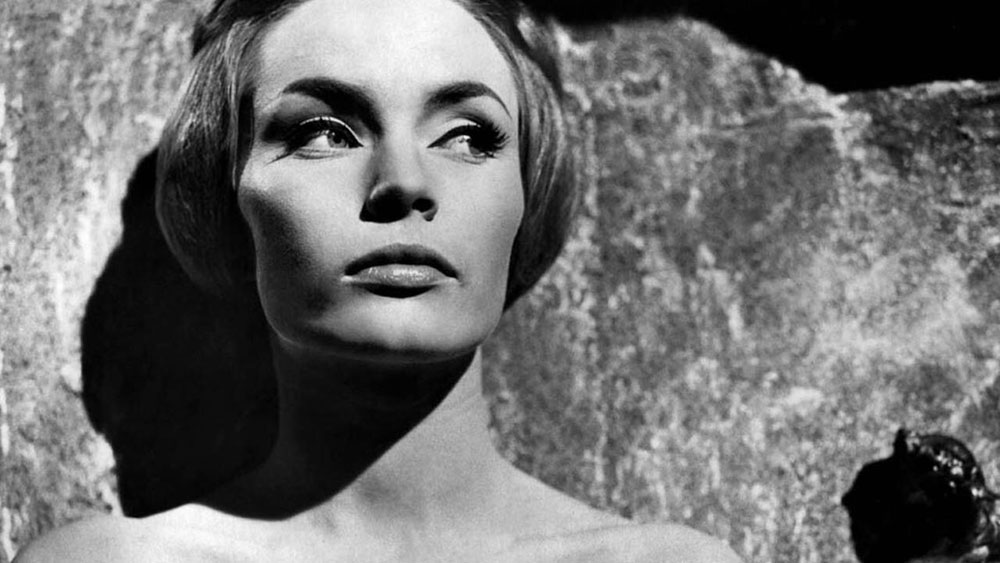 Sure, there’s also the element of Elisabeth being dead and Alan being alive, and all the talk throughout the film of them existing in “different worlds” is mostly about that, but even that’s pretty metaphorical. Either way, Elisabeth is trying to be “something she’s not,” and desperate for Alan’s affection to prove Julia wrong.

After having sex with Alan, Elisabeth appears even more unhappy than before. Being with him didn’t change who — or what — she is.

As the events surrounding Elisabeth’s death are revealed, it becomes clear that this was a theme in her life, one that ended tragically. We see her on the night of her death at a party with her husband, while also fighting off the advances of her (male) lover. All the while, Julia watches her knowingly. The history between them goes unspoken, but it’s written all over their faces.

Later that night, Elisabeth’s lover storms into her bedroom and murders her husband, before turning on Elisabeth herself. Julia kills the lover and attempts to placate the distraught Elisabeth with passionate kisses and caresses. Elisabeth then stabs Julia and screams in horror at the scene around her.

We don’t actually see how Elisabeth dies. That’s just left wide open, so who knows if she committed suicide or what. That seems like the logical assumption given that literally everyone else in the castle is lying dead on her bedroom floor.

This pivotal scene is incomplete in more ways than one. 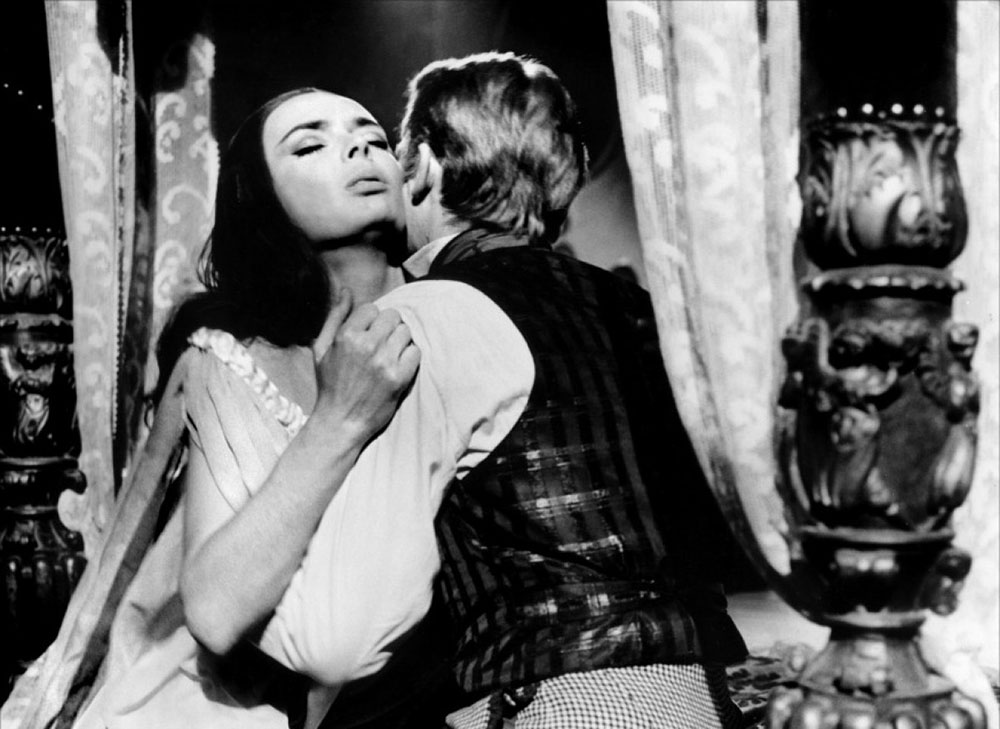 The original release of the film was dubbed in French; it was then dubbed again in English for the US release. Some scenes were cut — most importantly this scene, because the American censors objected to the homoeroticism between Elisabeth and Julia. The cut scenes were only recently restored and are therefore still in French.

A recent “uncensored” DVD release is the first instance of subtitles being provided for these scenes. I watched the film on Tubi, with no subtitles for the cut scenes. I actually didn’t learn about all of this until after I first watched the film a couple of weeks ago, so needless to say I was confused (doubly so, because alcohol was involved) by the random snippets of French dialogue.

Now I desperately need to know what’s being said in Elisabeth and Julia’s final scene. I feel like I’m evaluating it without full context, and it’s bugging me so much that I’m probably going to buy the DVD. If it were any other movie I probably wouldn’t — but this is a lesbian Barbara Steele movie, after all. It’s important.

Castle of Blood ends, of course, with Alan’s death, so the ghosts get to come back another year. And Elisabeth and Julia get to spend another All Souls’ Eve angrily eye-fucking each other while Elisabeth clings to her pretended heterosexuality.

Not exactly my dream movie, but it’ll take what I can get.