Posted by:
Tags:  film analysis racism Scary Stories to Tell in the Dark

This movie adaptation of the infamous children’s book delivers on the scares, but falls short on the treatment of its sole character of color. 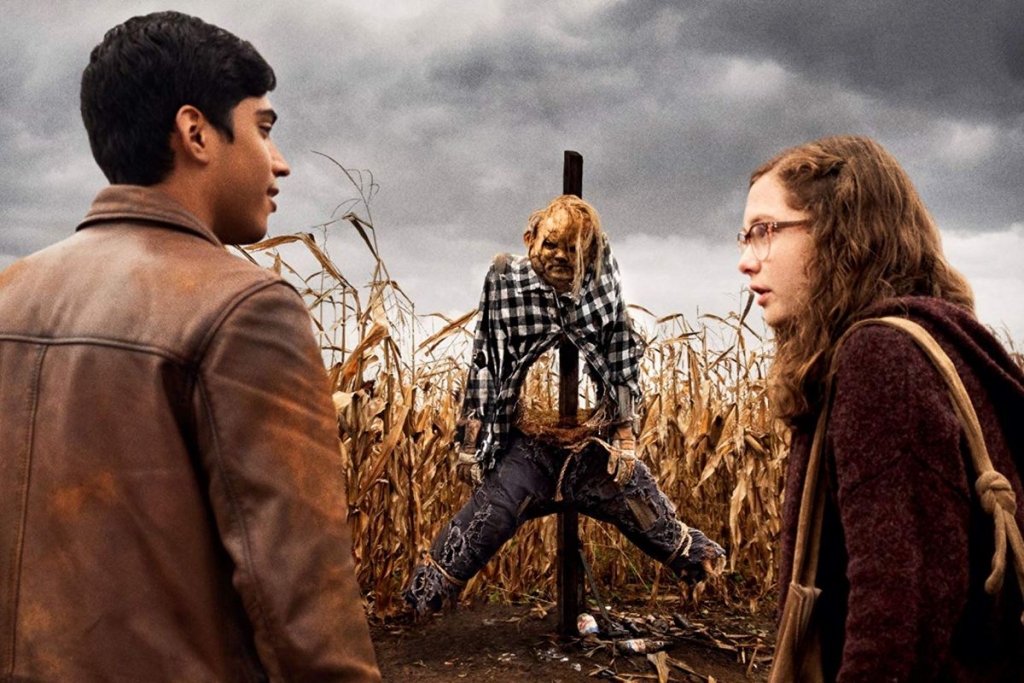 Scary Stories to Tell in the Dark is a 2018 release that follows a group of four high school-aged friends: Stella (Zoe Colletti), the defunct leader, Auggie (Gabriel Rush), Chuck (Austin Zajur) and Ramón (Michael Garza), a drifter who blows into town. On Halloween night in 1968, the group ventures into a derelict mansion that’s rumored to be haunted by the vengeful spirit of one of its residents.

That resident is Sara Bellows. Considered an invalid by her family, she was kept in the crawling darkness of the basement, where she kept herself entertained by writing a book of scary stories based around her family. Stella finds Sara’s book and takes it with her, unknowingly unleashing an evil that picks off her friends one by one. They know that any minute, any of them could be the next victim of the book’s curse.

In the film, there’s a lot of focus on Stella and her sordid relationship with her mother. Her mother – who goes unseen in the film – leaves Stella and her father, and Stella feels as if she is the one to blame for her mother’s absence.

Ramón is normally the person throughout the film to console Stella when these painful emotions come to light. And there’s nothing wrong with exploring these feelings with a character, because, ultimately, it tends to affect character motivations. Had Stella herself not discovered a love of writing as a coping mechanism for her pain and loss, perhaps she’d be less inclined to take a book that didn’t belong to her.

It feels a bit bizarre, however, to have Ramón, the sole protagonist of color in the film, spend so much of his screen-time comforting a white character. 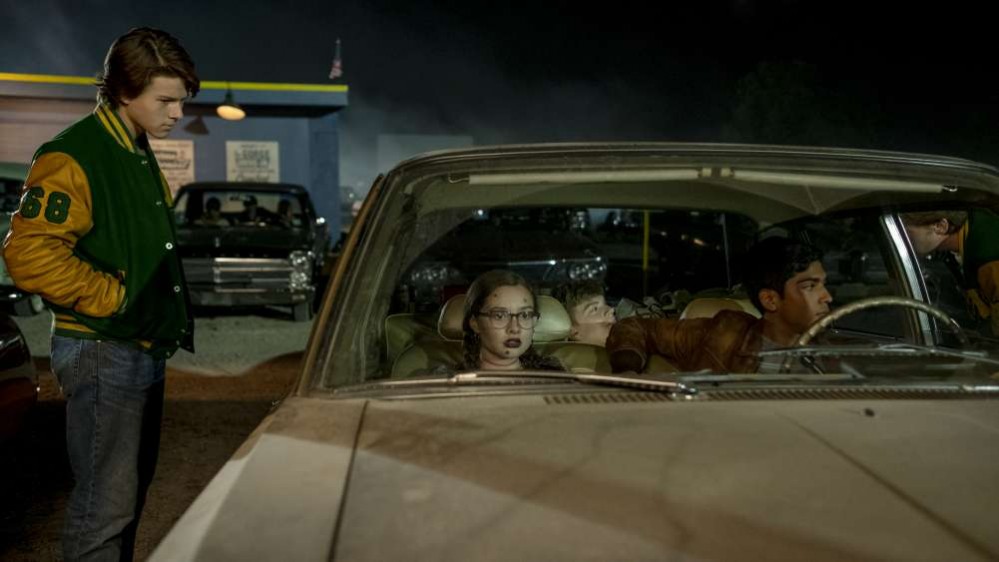 Meanwhile, the racism he suffers at the hands of the Mill Valley residents goes unaddressed.

Ramón is the drifter, the mysterious brown man that rolls into town, introduced when the three main characters are fleeing from a bully after a prank gone wrong. They pile into his car at a drive-in movie screening of Night of the Living Dead. He lets them stay and wait out the threat, even after he himself starts being harassed.

The archetype of the bully-jock character, Tommy Milner (Austin Abrams), doesn’t hesitate in hurling slurs at Ramón on two distinct occasions. When the group refuses to exit Ramón’s vehicle, Tommy Milner calls him a slur commonly used against Latino people. The second time, Tommy goes so far as to smear the slur on both the front and back of Ramón’s car with what looks like fecal matter, after stealing the engine.

The movie then tries to lighten the mood by having Chuck relate the event to when the same bully “farted in his milk carton and forced him to drink it”. Because, obviously, a hate crime and milk-carton farts are absolutely on the same level of awfulness. 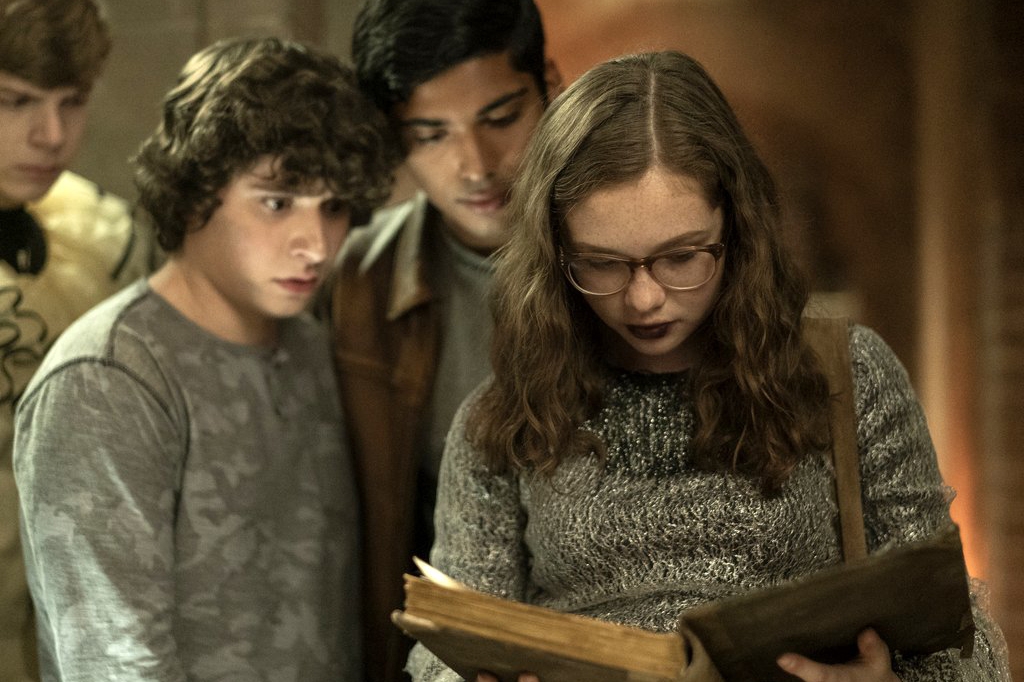 I think this raises an interesting point about the town of Mill Valley.

We get the impression, from shots of the townsfolk, that it is a predominately white little village. Chuck, Auggie and Stella are white teenagers in a closed-off town in the late 1960s. What kind of point of reference do they have for consoling a friend after a hate crime? We get a story about a milk carton, to lighten things up, because there’s really no way they could possibly understand what it was like to be targeted by hate as a result of your race.

Perhaps that’s why Ramón can so easily comfort Stella, yet she struggles to find the right words when he’s visibly distressed about being called a racial slur.

When Tommy goes missing because of actions indirectly caused by Stella, the Chief of Police in Mill Valley, Turner (Gil Bellows), interrogates Ramón as he’s getting his car fixed. Turner has an idea that Milner was the one who ruined Ramón’s car, but that doesn’t stop the sheriff from looking at him as the main suspect in Tommy’s disappearance.

Automatically, he thinks Ramón has something to do with it – maybe a little ploy for revenge – and ends his monologue suggesting that Ramón should stay in town until Tommy turns up, or they can prove Ramón’s involvement. He ends his monologue by stating Ramón’s last name, which he lists as Rodriguez at the time, in a tone that suggests bafflement. This implies he can’t believe someone like Ramón Rodriguez would come to a little town in Pennsylvania and stir up trouble for the nice, white townsfolk.

Later in the film, it is revealed that Ramón is on the run because he is trying to dodge the draft. He confesses to Stella that his brother was blown to pieces in the Vietnam war, only a short time after being selected from the draft. Once the sheriff finds out, he denies Ramon a phone call and immediately throws him into a cell. Though Stella was also caught, Chief Turner begs for her to leave because, unlike Ramón, she’s a “good kid”.

The movie concludes in a way that suggests it is a satisfying ending for the protagonists, with Ramón reporting to his post and going off to fight in war.

There is no further exploration of Ramón’s feelings about the horrors of war, his brother’s untimely death, or facing prejudice from Mill Valley folk. Nothing. He goes off to fight, and the movie believes that we should see this as positive character development. I don’t know if they’re trying to frame it as Ramón getting over his feelings of cowardice for not fighting. But he says this to Stella after they are arrested, and the truth comes forward:

“They (the military) just send you to die out there (Vietnam).”

That doesn’t sound like someone who eventually came around to being shipped out to fight and die in a war.

Having Ramón accept his enlistment also feels like another huge slap in the face, because not once did anyone who wronged Ramón or treated him like a second-class citizen apologize or make any sort of move to redeem themselves. They take their racism to the tomb. Forcing a young man of color to fight for a country that clearly has no respect or value for his life is anything but a satisfying ending. 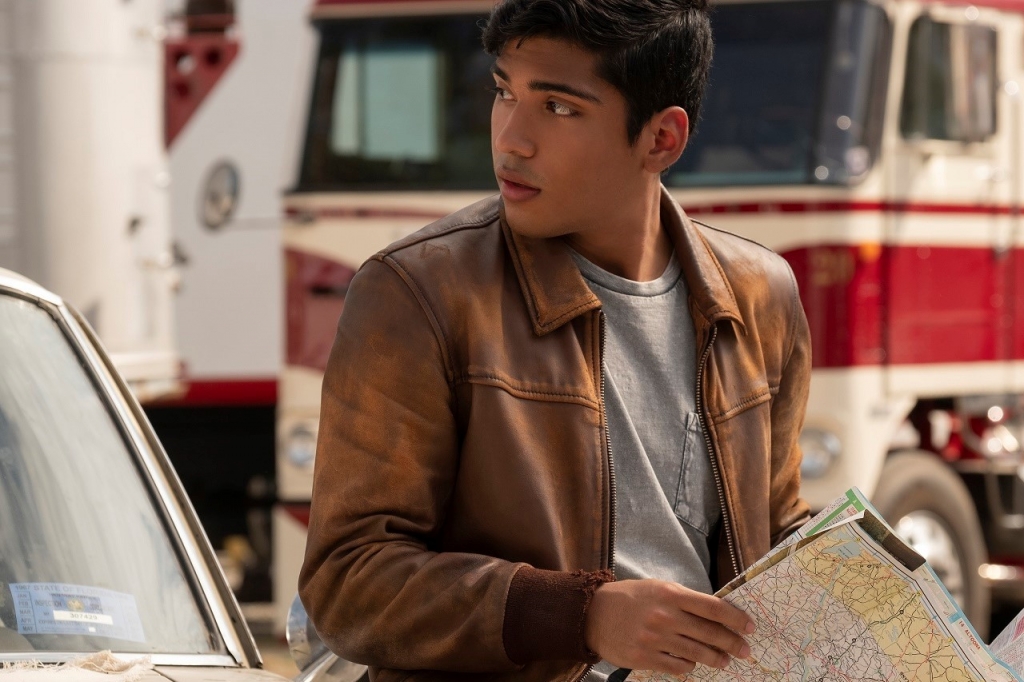 Scary Stories to Tell in the Dark seemingly has progressive views on women and condemns past treatments of mental health facilities.

So, why does it flounder on treating characters of color with even a modicum of respect? Perhaps that’s all part of the plan.

As Stella and her crew are fighting against supernatural horrors, the backdrop of Scary Stories is filled with real life terror; namely, the looming tragedy of the Vietnam War, and the changing face of US politics as Richard Nixon is elected into office.

It’s clear in shots where the television is blaring coverage of the war that the historical undertones are important. But it isn’t stated outright what we should infer from it. I’d like to think that, in forcing Ramón to overcome these ghostly adversaries all while fighting the real-world treatment of people of color, it’s the writer’s way of saying that the horror isn’t limited to a haunted book, or a scary story.

The real scary story was the abhorrent attitudes towards people of color, by good, small-town folks.