Hammer Film’s 1966 Monster Movie “THE REPTILE” slithers onto Blu-ray from Scream Factory — another must have addition to any Hammer Horror collection. 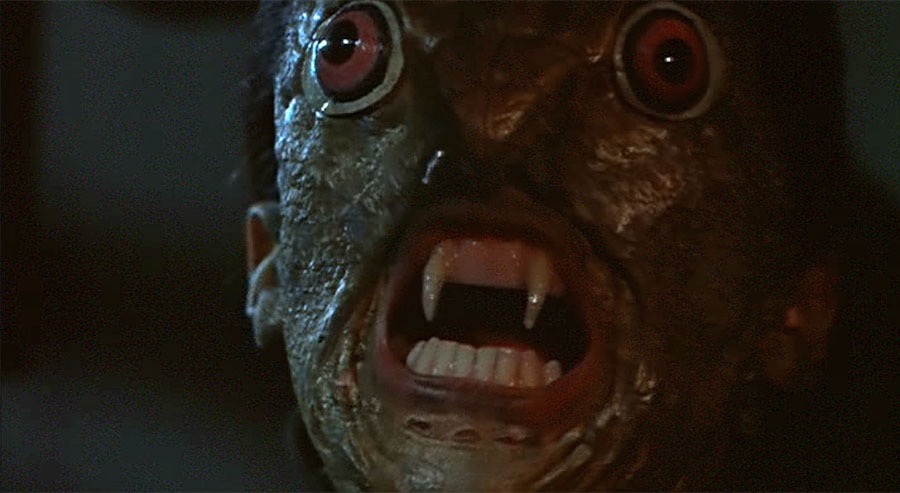 Released in 1966, Hammer Film’s THE REPTILE was one of four films shot in succession, starting with DRACULA: PRINCE OF DARKNESS, also released in 1966. The idea behind shooting four movies back-to-back was that it would save the studio money. The first three movies produced: DRACULA: PRINCE OF DARKNESS, RASPUTIN: THE MAD MONK, and THE PLAGUE OF THE ZOMBIES all exceeded their original $100,000 budgets. By the time production started on THE REPTILE, producers were tightening the budget purse.

Directed by Hammer veteran John Gilling (THE SHADOW OF THE CAT, THE PLAGUE OF THE ZOMBIES, THE CRIMSON BLADE, and more), THE REPTILE is a monster movie that borrows elements from the werewolf legend and mixes it with a mystery story. The mystery isn’t who the snake person is, but how that person became a snake monster and why. 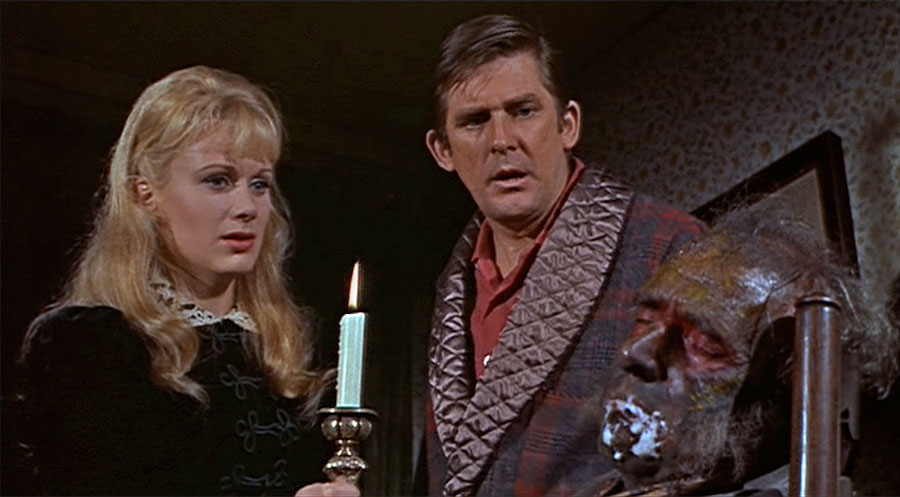 After the death of his brother, Harry Spalding (Ray Barrett) and his wife Valerie (Jennifer Daniel) travel to the village of Clagmoor to claim the cottage of Harry’s brother. The locals in Clagmoor are not particularly hospitable to the new owners of the Spalding cottage except for a tavern owner, Tom (Michael Ripper). As Harry questions Tom about his new home, Tom fills him in on strange deaths occurring in the village. Tom’s village gossip leads him to team with Harry to investigate the circumstances around the death of Harry’s brother.

Valerie, in the meantime, has a tense introduction with their neighbor Doctor Franklyn (Noel William). The doctor is terse and rude in his first meeting with Valerie as he explains he’s looking for his wayward daughter. She often runs away, and he believes she’s hiding in the Spalding home.

Shortly after all the introductions of the main players in the story, bodies start dropping and showing signs of a mysterious illness (black discoloration of the face and neck and foaming from the mouth). Not long after the first body is found, Tom urges Harry to dig up his brother and confirm how he died. From this point the investigation into the mystery of Harry’s brother’s death and the death of other villagers begins, with Tom leading the way. 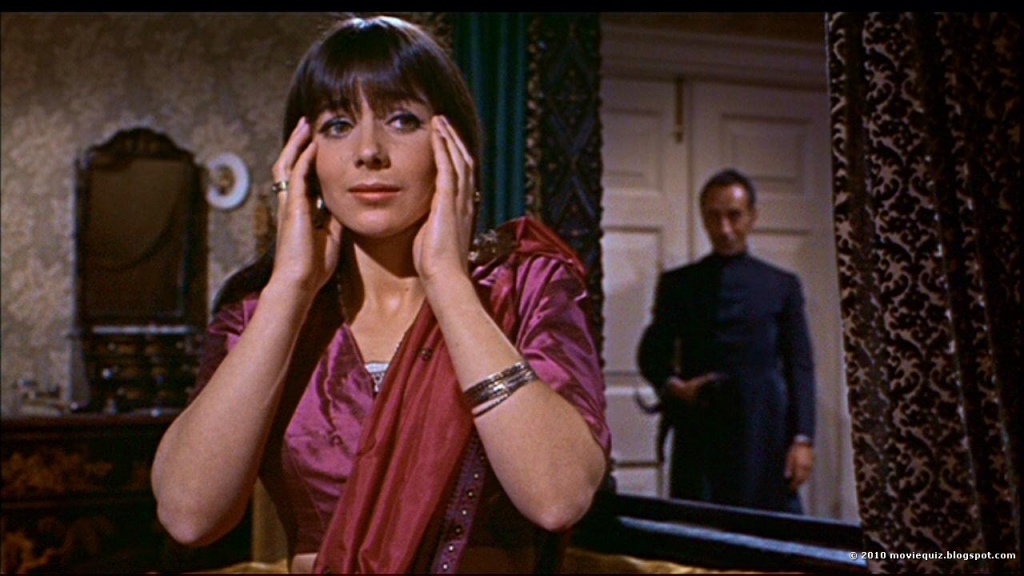 But rather than a who-dunnit, THE REPTILE is more a why- and how-dunnit mystery. It’s easy to figure out who the killer snake person is, and the audience can figure it out long before the movie’s heroes do. But the real story is how this person became a were-snake, and why.

Hammer horror films are known for their use of bright colors, but THE REPTILE mutes the colors on screen, except when the color green is on-screen. 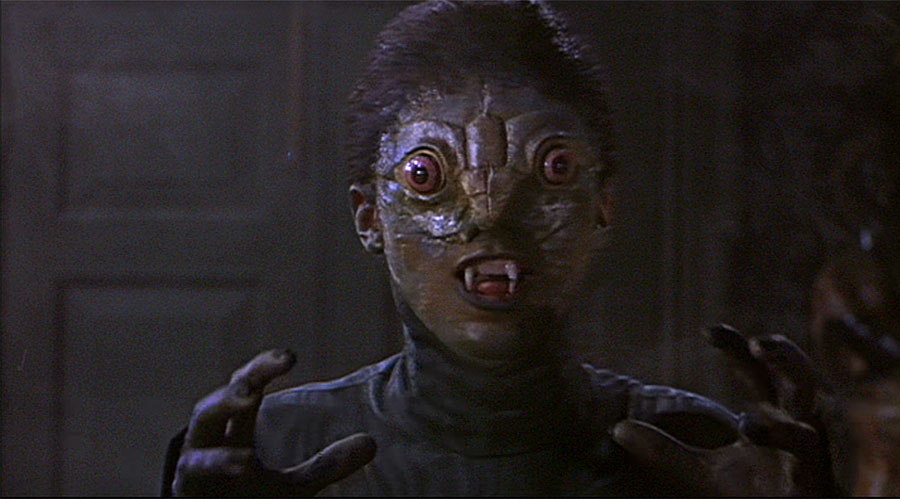 There is little to no gore in THE REPTILE, but that doesn’t mean the movie doesn’t have impressive and disturbing special effects, especially the scenes of victims dying from the snake venom. The effect of the snake bite causes the victim’s face to discolor black and begin to foam at the mouth.

There is also a redness that appears around the victim’s eyes. Seeing someone claw at their throat while their face and neck turns black, and foam begins to spray out of their mouth is unnerving to say the least — and a shocking image for a 1966 movie. 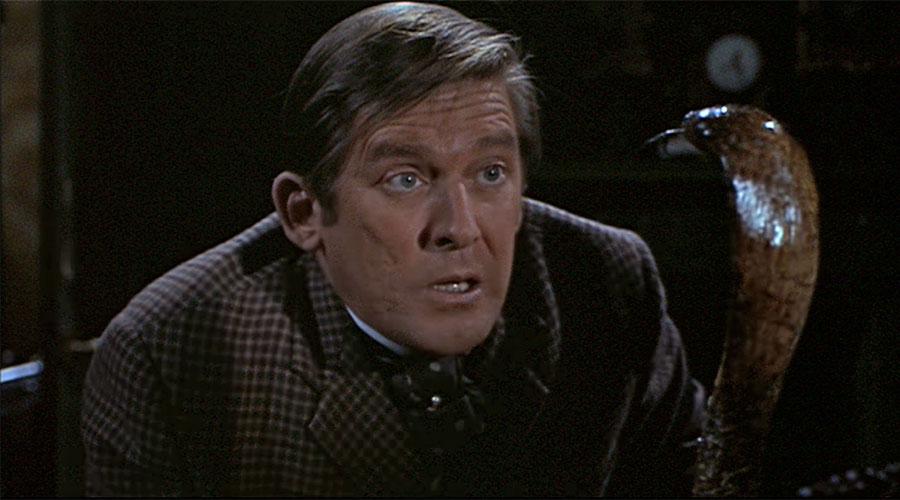 THE REPTILE has not been remastered in a 4K scan, and while the print does not look pristine it does look very good. Many of the night scenes were shot during the day with a filter, but when they do have a scene that was shot at night the picture quality diminishes.

Like the Blu-ray release of LUST FOR A VAMPIRE, THE REPTILE is presented in two different aspect ratios, one of which is the original theatrical aspect ratio of 1.85:1.

There is one audio commentary track on the Blu-ray disc. The commentary is by three film historians: Steve Haberman, Ted Newsom, and Constantine Nasr, who had previously provided film commentary for the Scream Factory Blu-ray release of THE PLAGUE OF THE ZOMBIES. The three get along well and have a natural ease to their conversation which includes some good-natured ribbing between themselves and about the movie. 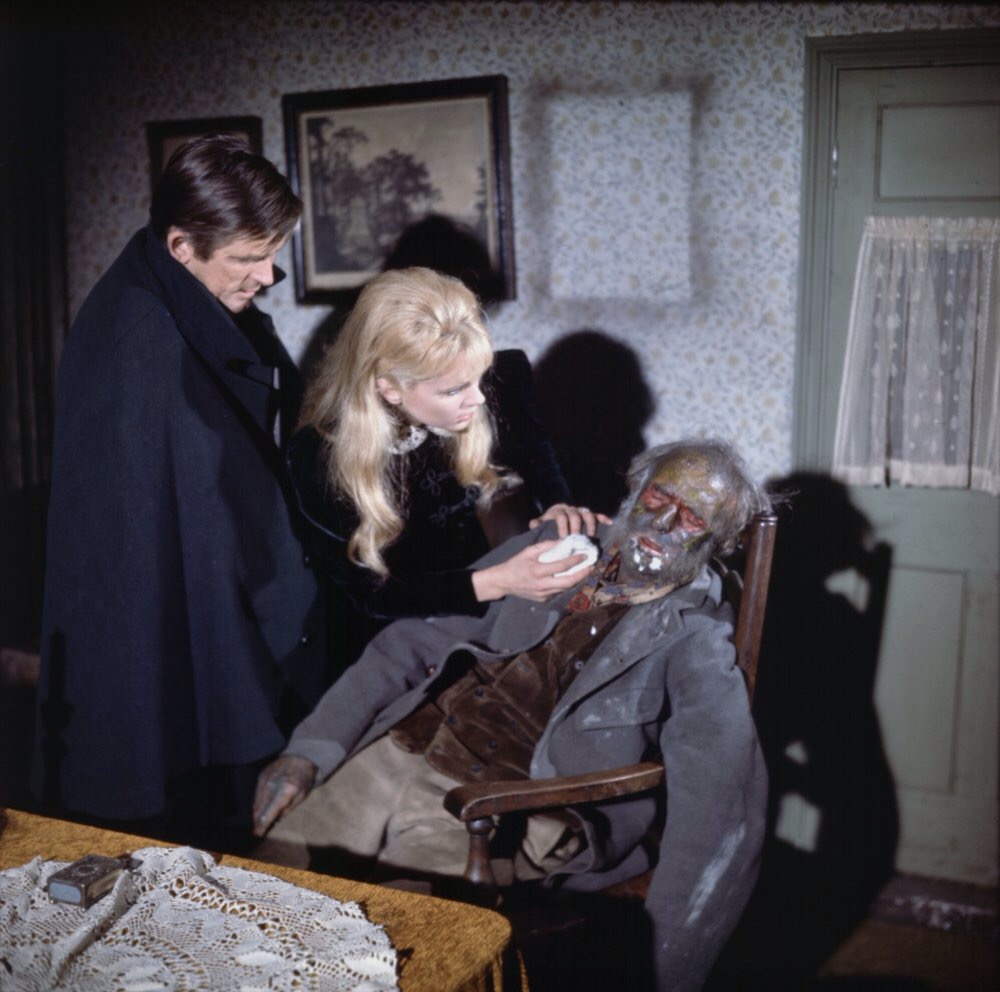 The commentary focuses quite a bit on the makeup effects and the locations used for the film. Additionally, they do provide some insight into the actors’ history with Hammer. Some of the commentary focuses on the casting of Ray Barrett as the lead, and whether he was deserving of being cast in such a role due to his looks and lack of charismas on-screen.

The interview with William P. Cartlidge, the first-assistant director, shines some light on his background in the industry.

Cartlidge discusses the difficulty of getting a start in the filmmaking industry, even with a father who has already made a place for himself in filmmaking. He also covers the filming of THE REPTILE toward the end of the interview. Cartlidge doesn’t seem to have been too keen to be associated with a horror movie but doesn’t share that the job was a negative experience overall. 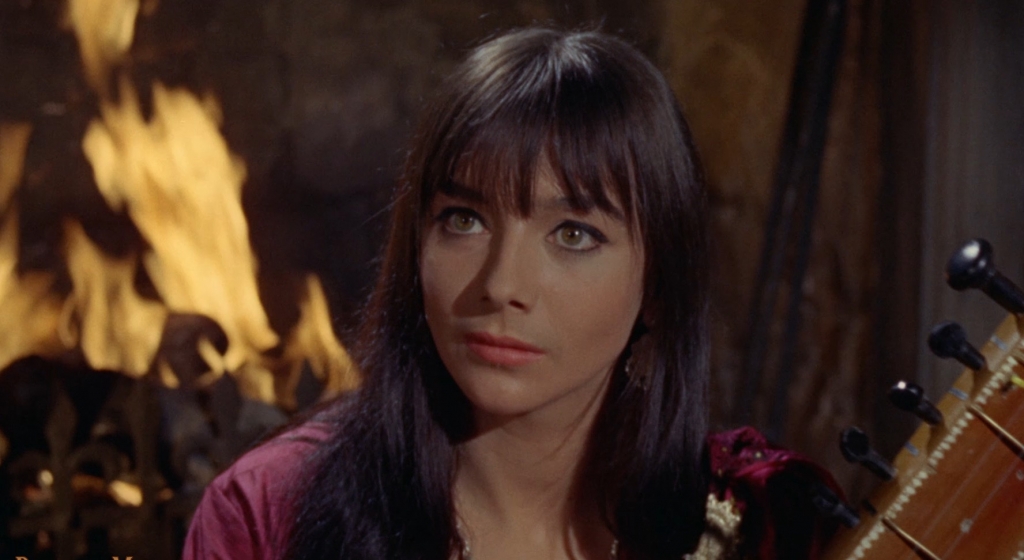 The documentary “The Serpent’s Tail,” is told from a historian and fan perspective. But fans of the BBC series “Sherlock” will be excited to see series star, co-creator, and writer Mark Gatiss as one of the people interviewed for the documentary. The documentary goes into more detail about the casting and filming of THE REPTILE than the audio commentary.

Like some home video releases of Hammer Films, this disc includes an episode of “World Of Hammer” hosted by actor Oliver Reed (known by Hammer fans for the 1961 film THE CURSE OF THE WEREWOLF). This episode covers the “Wicked Women” of Hammer. For Hammer fans it shines the light on villains from lesser- known Hammer films and stays away from relying too much on their better-known vampire villainesses. I was pleasantly surprised to see that Oscar winner and Hollywood legend Bette Davis had wicked roles in Hammer films. 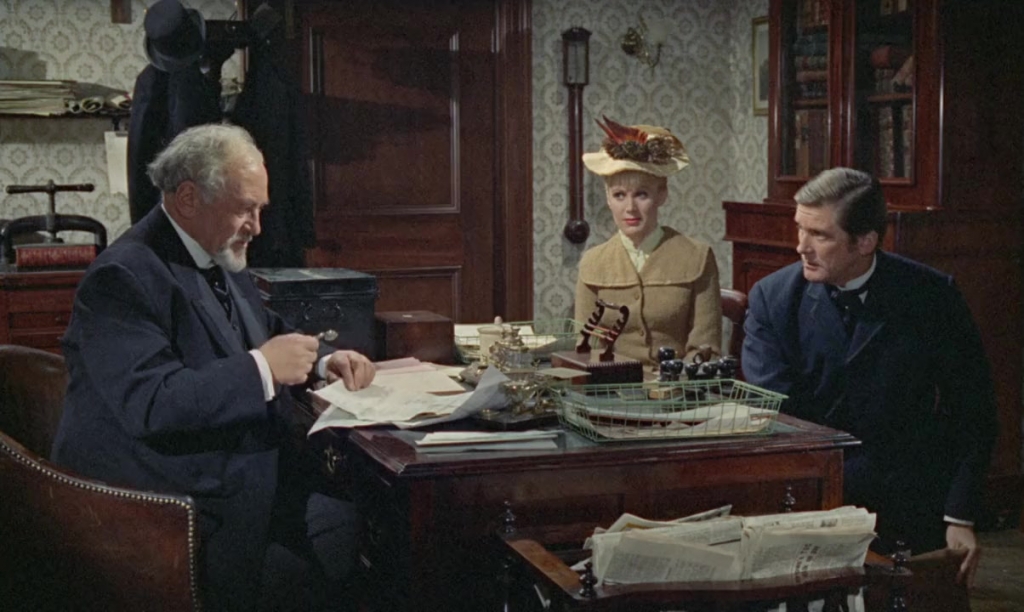 Scream Factory continues to release top quality Blu-rays of Hammer horror films and can add THE REPTILE to their list of must-own releases.

Any self-respecting Hammer fan should be adding THE REPTILE to their home collection.

Scream Factory will be releasing THE REPTILE Blu-ray on July 30, 2019. 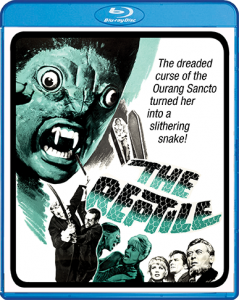