Severin Films unleashes the full horror of the undead with the release of the Gabriele Crisanti directed cult-classic zombie flick, “Burial Ground”. 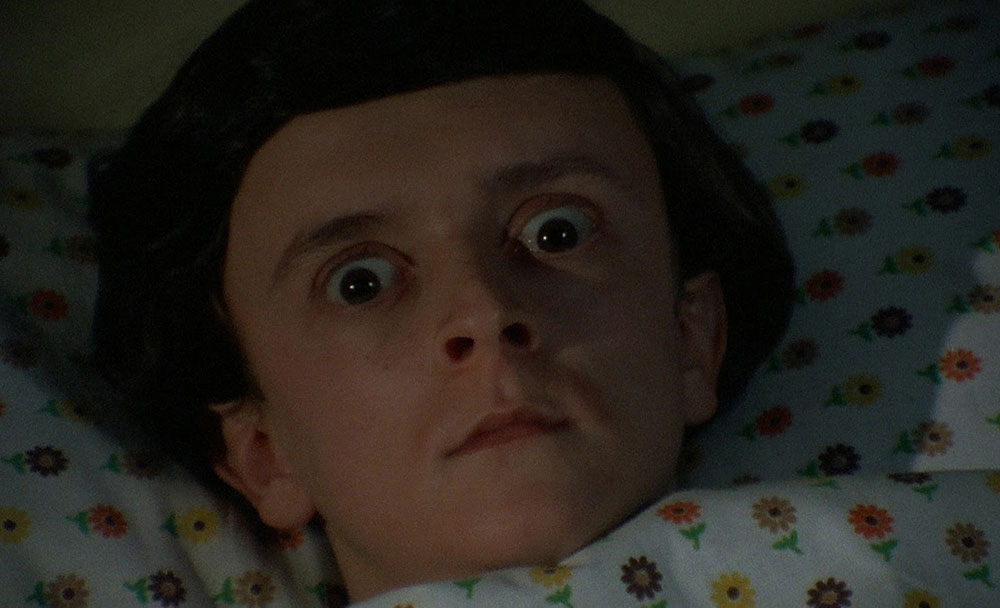 Thanks to Severin Films, I’ve come to love Italian horror films from the 1970s and 80s. Yes, they can be cheesy, and yes, most are made on a miniscule budget. Some are even made in the Philippines under less than ideal conditions. These movies that I missed out on growing up are now making me feel like the long-ago kid catching horror movies on an old black and white television.

One of Severin Films’ recent releases is the cult zombie film Burial Ground (aka The Nights of Terror) . This is a movie I had heard about but had never had the chance to see. Most of the movie’s infamy comes from its strange subplot of implied incest between a mother and very young son (comically played by a short 20-something year old).

With all the build up to this scandalous movie, would watching Burial Ground on this new Blu-ray release live up to its reputation? 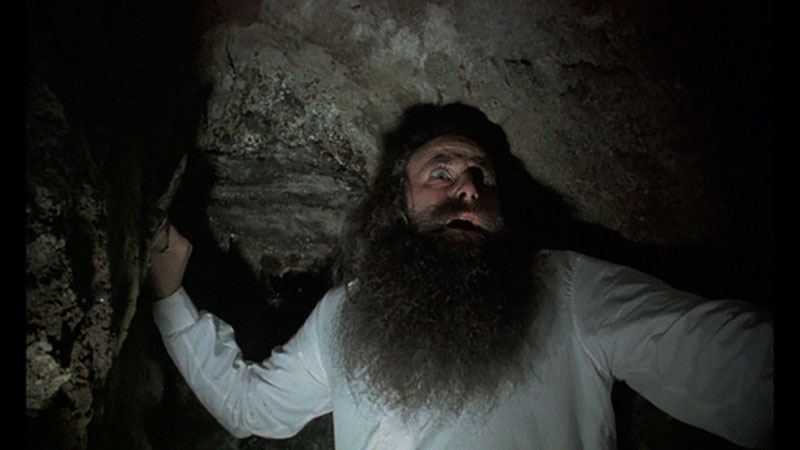 Burial Ground opens with a distinguished looking professor searching through an old (is there any other kind in these movies) crypt near his mansion. During his investigations, he mistakenly triggers an ancient curse, awakening the buried dead, as one does.

The dead quickly surround and kill the professor. Meanwhile, guests of the professor begin to arrive at his mansion, but finding him away, make themselves at home. The couples find their rooms and get down to some sexy time before they tour the home and grounds the next day.

This mother/son story is what is most talked about, because honestly, it’s stunning and incredibly creepy. 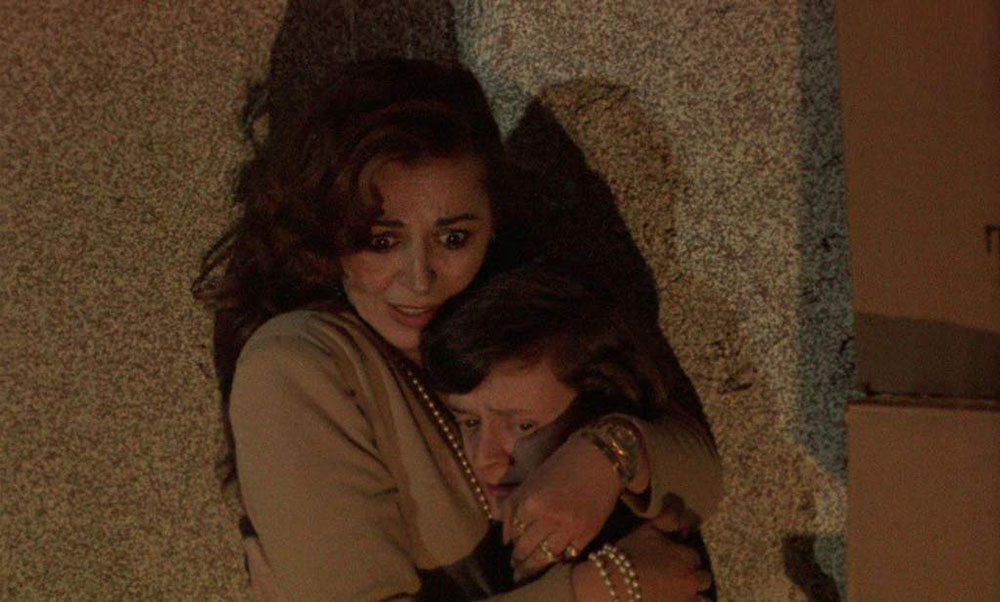 The level of creepiness is elevated because Peter Bark is clearly an adult playing the role of a child.

While this sensationalism brings attention to the movie, it draws away from the fact that BURIAL GROUND is a very good zombie movie. There’s very little subplot or distractions in this movie. It’s a meat-and-potatoes straight to the horror flick.

The dead are raised, potential zombie meals arrive, and the zombies attack in glorious gory and inventive ways. 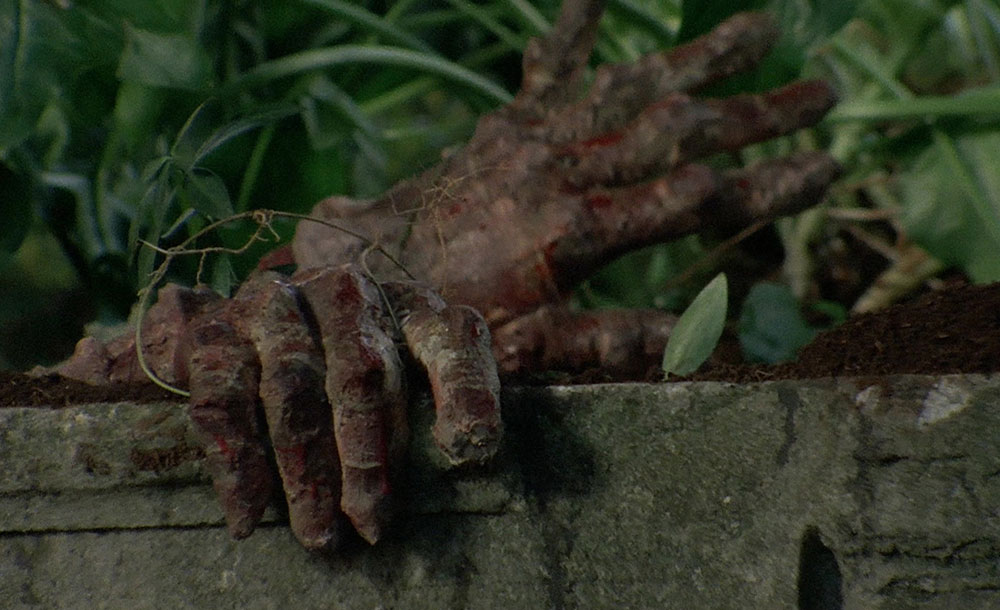 These zombies are dusty and slow, but they also coordinate attacks and use tools of murder really well. One zombie throws a spike at a housemaid hanging out of a window, pinning her hand to the wall which allows the zombies to move on her and use a giant scythe to behead her.

The zombie designs themselves are not on the level of the work in George Romero’s movies, and that’s alright. These zombies are in various degrees of decay, but they all have slimy, wet worms wiggling around their faces, which is as disturbing as any zombie in an episode of “The Walking Dead.”

It’s unfortunate that Burial Ground isn’t talked about with movies such as Day of the Dead or House by the Cemetery. With Severin Films’ release, maybe Burial Ground’s standing among zombie flicks will rise. 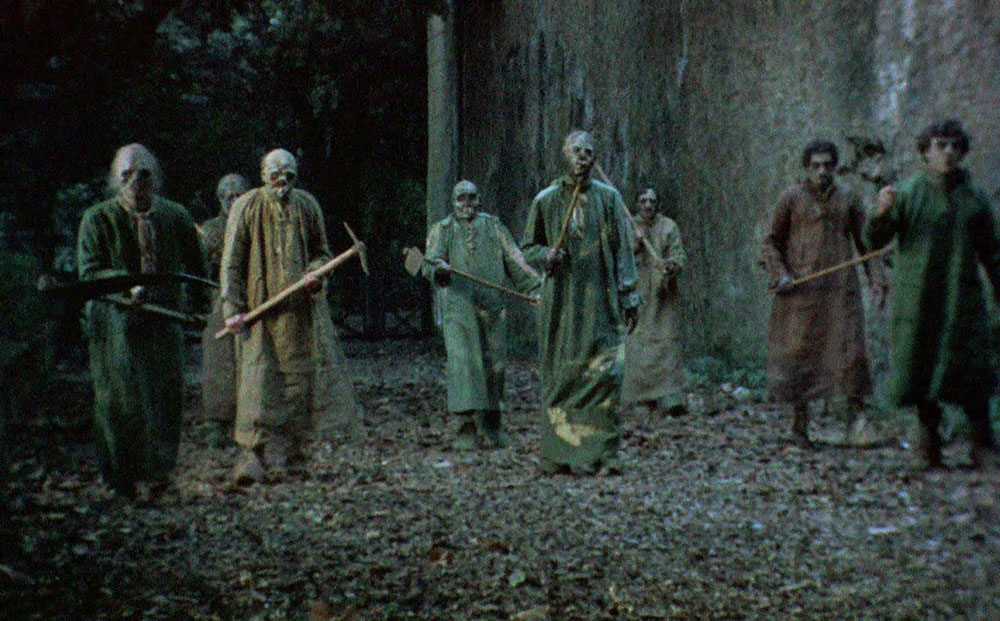 Severin Films stacks this release with plenty of special features. The movie has been restored in a 2K scan and color corrected. The movie looks better than it has in any previous home video release. The picture is so sharp, it looks like a movie that was recently made.

The disc includes a tour of the mansion and grounds used to film Burial Ground. The interviews with the producers and actors are insightful and entertaining. I will never not be engrossed by interviews with the talent who make these off-the-wall Italian horror movies. The subjects of the interviews come across as very open and honest about their experiences, even when those experiences sound completely terrible.

The only feature that is lacking is the festival Q&A with Peter Bark. The sound quality isn’t great, and the questions from fans aren’t that compelling. It’s fascinating to see an interview with the actor, and he does go into some of his other acting work, but could have been better in a formal setting like the other interviews included on the disc. 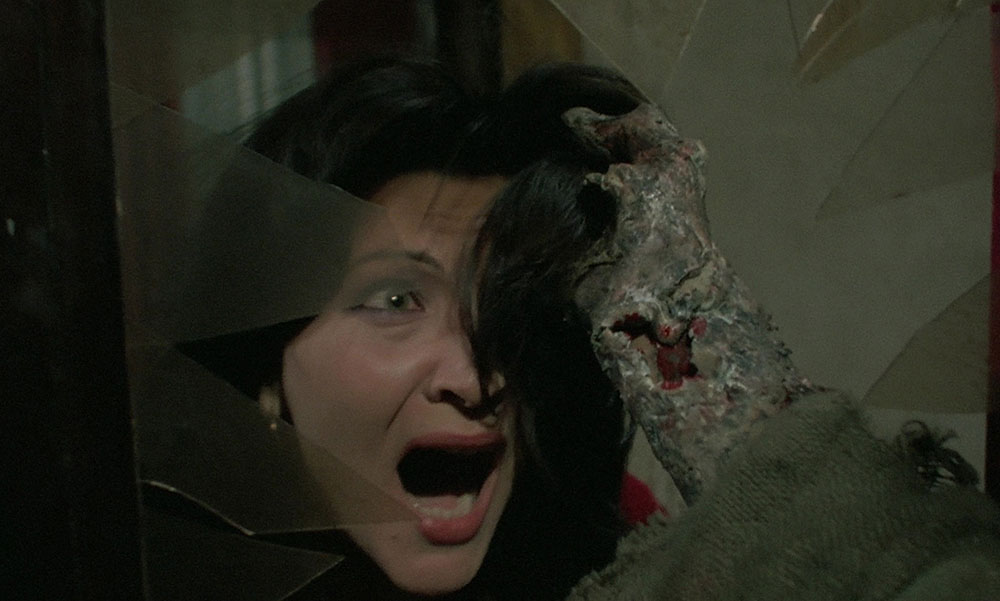 I cannot recommend this Severin Films release enough. A great movie combined with a fully packed Blu-ray makes for a must have in your horror movie library. Get Burial Ground, watch it for yourself, and then make sure to introduce your friends to this horrifying, stunning, and jaw-droppingly shocking zombie movie.