Severin continues to pay loving tribute to horror master Lucio Fulci, and “Demonia”, while not his best work, is another must-own Blu-ray.

In what fans consider his last great film, Godfather of Gore Lucio Fulci returns to the startling imagery and bloody excesses of his ‘70s/‘80s classics for an unholy saga of demonic nuns and supernatural carnage: When a Canadian archeological team begins excavating the ruins of a medieval Sicilian monastery, they will unleash the vengeance of a crucified coven of satanic sisters with full-on Fulci fury. 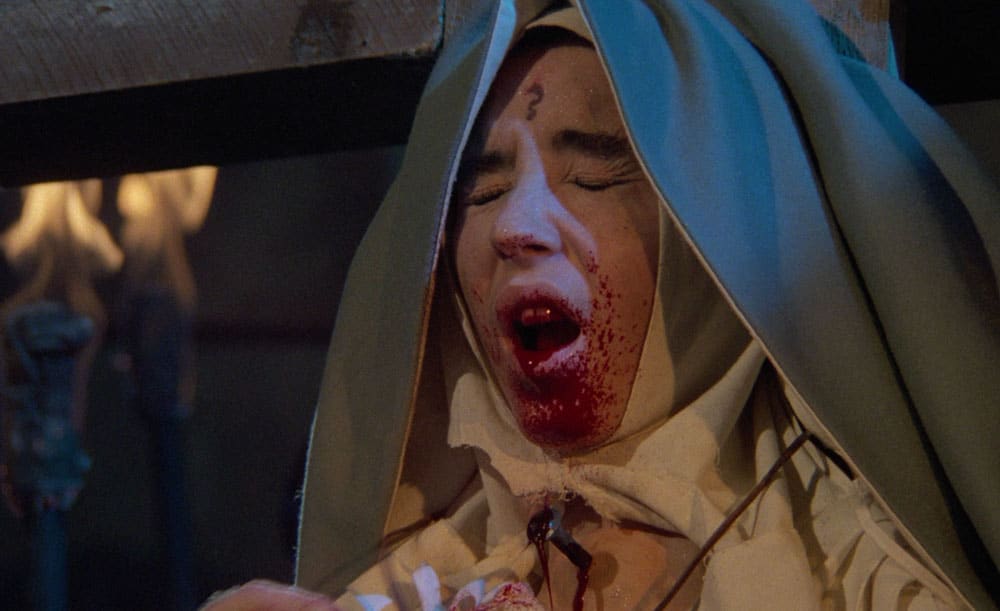 Sicily, 1486 — Demonia opens up in a chamber underneath a convent. Wooden crosses circle the floor, and strange symbols adorn the walls, some referencing Cthulhu. A hole in the middle floor leads to a crawl space that is filled with human remains. Torch-bearing men drag in a group of nuns who have a strange symbol on their foreheads. The men torture and crucify the nuns.

Toronto, 1990 — A group is performing a séance when Liza (Meg Register) has a vision of the nuns’ deaths. Liza screams and falls from the chair, ending the séance.

Later, Liza and her former Professor of Archeology, Professor Evans (Brett Halsey), bring an archaeology team to a dig site near the now-abandoned convent. Liz is fascinated by the convent, and despite warnings from some of the locals to steer clear of the building, she becomes increasingly obsessed with it.

Liza has disturbing dreams about the murdered nuns, and as she receives prophetic warnings to end her investigation into the crumbling convent, mysterious deaths begin to happen. Men from the town and on Liza’s team are found murdered in horrific and grisly ways, bringing the attention of an Inspector from Interpol (Lucio Fulci). Is someone from the town responsible for the murders, or are the nuns working through Liza to exact bloody revenge on the townspeople?

If you watched enough Fulci movies, and horror movies in general, I think you know the answer.

Demonia is Fulci’s 50th film, and one of the last films he made before his unfortunate death early in his collaboration with Dario Argento for the movie Wax Mask. 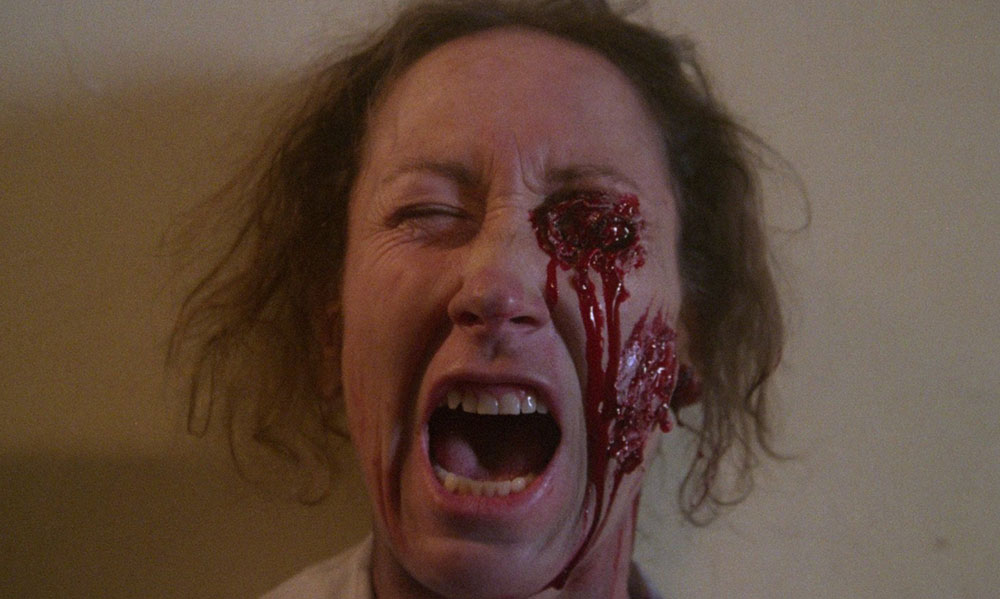 Despite Fulci’s status as a director, he was unable to secure the funding he wanted for Demonia, and the movie suffers for it. Originally slated to be a theatrical release, the movie was eventually released straight to home video.

Demonia contains many visual callbacks to Fulci’s earlier films, such as City of the Living Dead, The Beyond, House By The Cemetery, and others. Along with the visual cues, the cult symbols in the nuns’ chamber reference past Fulci movies, and mix in references to Lovecraftian mythology and Jewish symbols. This all adds an element to Demonia that hints at a larger Fulci-verse, where all these movies happen in the same universe/timeline.

Taken on its own, Demonia is one of the weaker Fulci movies despite the promise of the story and exceptional gore scenes fans expect from a Fulci movie.

The movie sabotages itself with some poor filmmaking decisions, for instance, the use of diffused lighting that Fulci was using to create a softer look. However, this filming choice made some scenes in the movie look washed out.

The editing of the movie is questionable, and according to Assistant Director Antonia Tentori, is the reason that many of the effects do not look as good as they had been planned or originally shot. The lack of a budget shows in many of the effects as well, especially in a scene where a woman is attacked by her cats. While, overall, the scene is effective, it is hard to overlook how fake the cats look and not notice they are being thrown at the woman’s face.

It’s difficult to fault a Fulci movie for having a story that doesn’t make a whole lot of sense, but Demonia is probably one of the most coherent stories he’s put to film. 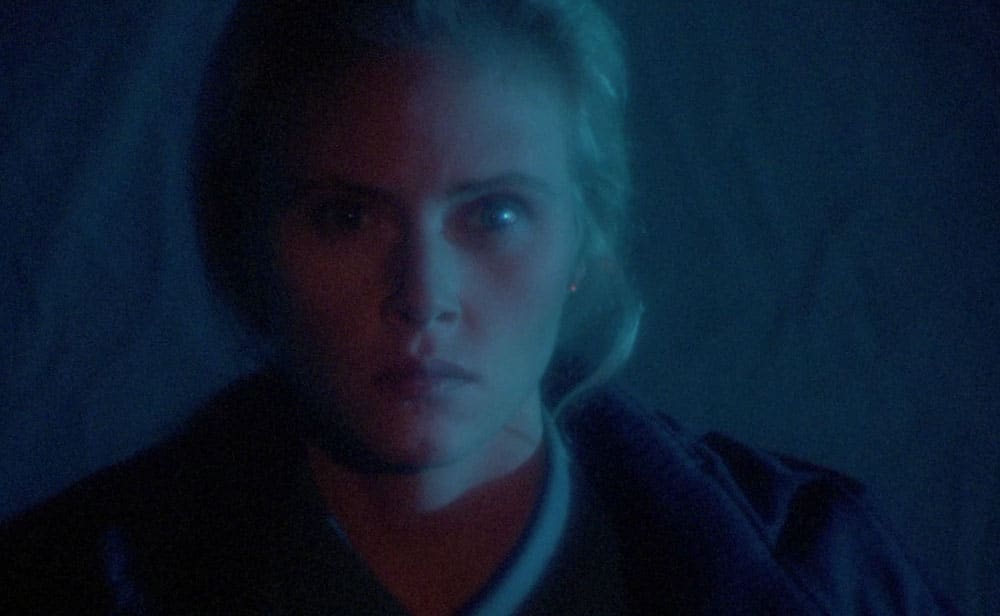 But in the end, it doesn’t really help, as the movie drags at certain points and can feel longer than its actual running time.

Demonia has a lot of promise and a few excellent kill effects but doesn’t quite do enough to raise it to the status of a Fulci classic. For a nunsploitation film that relies on nun imagery for packaging the movie, there’s remarkably little nun action in the film.

Demonia is a movie that, in Fulci’s prime, could have been made in a way that elevated it to movies such as The Beyond.

This release, as good as it looks in the restoration, is a reminder of what Fulci could do with a limited budget — but also that the end of his career was far from his peak. 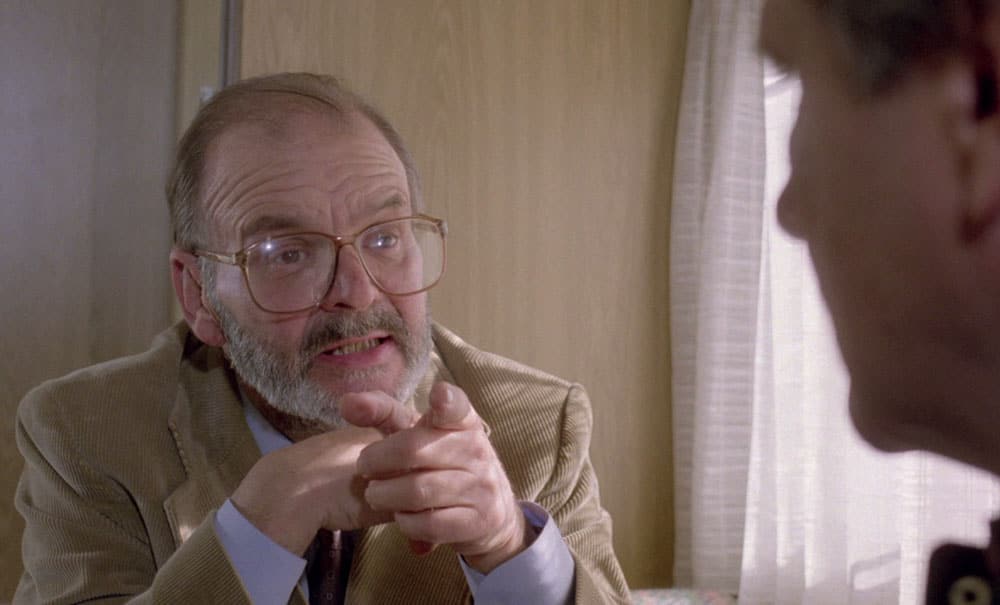 Severin Films continues to do remarkable work releasing Fulci’s later film library, and the release of Demonia is no exception. The restoration looks fantastic, even if the scenes where the diffused lighting technique is most noticeable are somewhat distracting.

The disc contains a commentary track from author Stephen Thrower, which contains a lot of insight into Fulci and the making of Demonia, but the delivery is dry and academic.

Severin includes a couple of interviews with the Assistant Director and the Camera Operator. Of the two, the interview with Assistant Director Antonia Tentori is the one to watch. Tentori is able to go deep on his experiences working on Demonia, as well as his long collaborations with Fulci. It’s a very personal and enlightening interview.

The disc also contains a nearly five-minute home video of Fulci preparing to shoot one of the more gore-filled death scenes in Demonia. It ends with Fulci addressing the camera directly, speaking in English. The quality is low, but it’s a nice treat for Fulci fans. 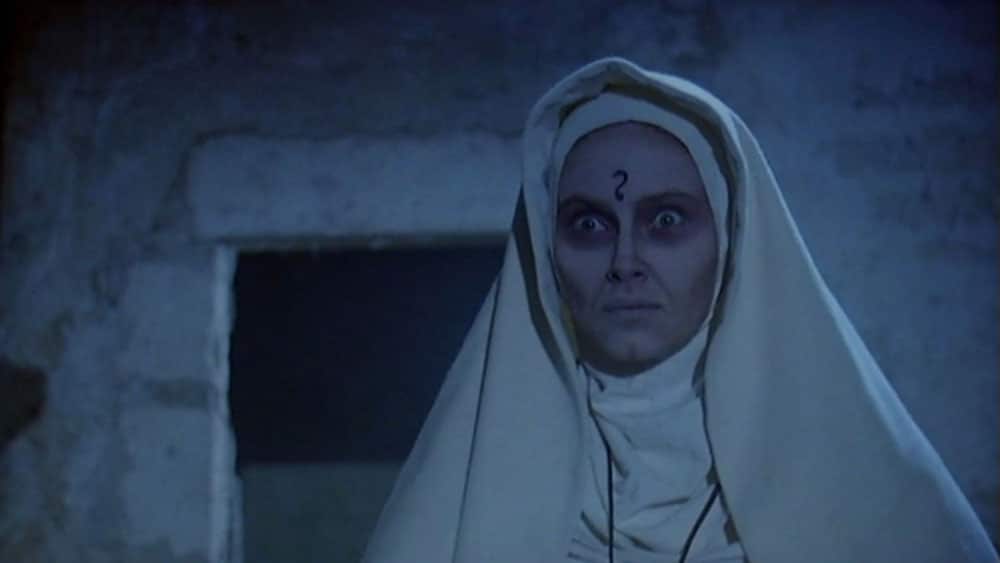 Severin Films has produced a very nice release of Demonia. The film looks better than it ever has, compared to previous home video releases. This Blu-ray release is sure to make both Fulci fans and nunsploitation fans happy.

For Fulci fans, especially, the special features commentary and interviews give deep-dive insight into the making of the movie, and Fulci’s career.