In our modern bedlam, once defined lines of good and evil have become shades of morally ambiguous grey; and comics have followed suit.

Every culture going all the way back to ancient times had their own stories that tried to explain what we couldn’t understand yet. Why does the sun come up? Helios rides across the sky with the Sun strapped to his chariot every day. Why does Summer lead to Fall? Because Persephone is trapped with Hades for half the year and the seasons represent her level of anguish. These days, the story goes something more like, why did half of all life in the universe get snapped out of existence? Because there’s a God Tyrant who’s decided to kill the excessive population so that the half remaining will flourish.

One thing is obvious about this kind of mythic storytelling. A lot of it was pulled out of someone’s ass.

Another thing these stories have in common is using Gods on different tiers to explain morality and putting them up against entities you know are evil just by how they dress. If you saw somebody wearing a Goblin costume on a day that isn’t Halloween, you could figure the dude’s got bad intentions.

Why has this stuff become our modern mythology? 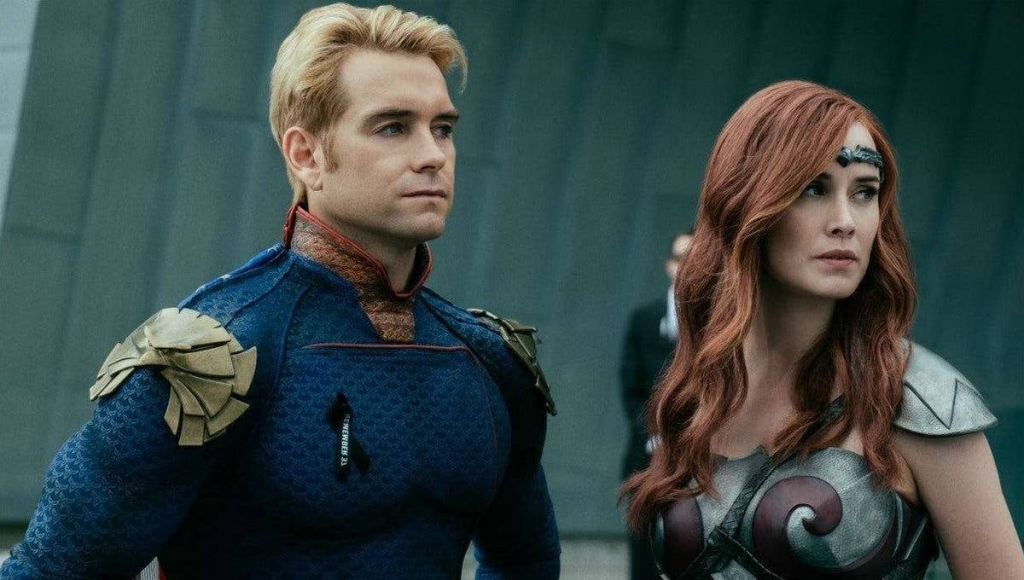 Well, first off, it’s everywhere. Every year, we get a pile of comic book adaptations that light up billboards, TV screens and products branded to tell us about which costumed hero is going fuck up which villain with great fashion sense. This is not unlike the way you would see Anubis and Osiris plastered all over ancient Egyptian Pyramids, or how Jesus is literally all over Italy. If people in the future excavate what is left of our society, they will more than likely find an enormous torn poster of Captain America that was put high above an LA freeway.

Marketing is not just promotion, people. Whether we like it or not, it influences culture.

They will talk about us looking up at IMAX screens to watch 500 million dollar moving pictures about super-powered people navigating the chaos of the universe. To think this all started out as a way to entertain kids and teach them not to be assholes. And to cause generations worth of hyper-sexuality by depicting women fighting crime wearing nothing but swim suits.

Think back to Chris Reeve’s Superman. A story about a boy who finds out he’s a survivor of another world and learns to use his alien nature to do good. Now think about The Boys. A story about a society secretly oppressed by douchebags with crazy abilities. Is it just me… or are these stories getting a little high on sex and violence?

Brian Michael Bendis’ Alias was a first for Marvel comics. 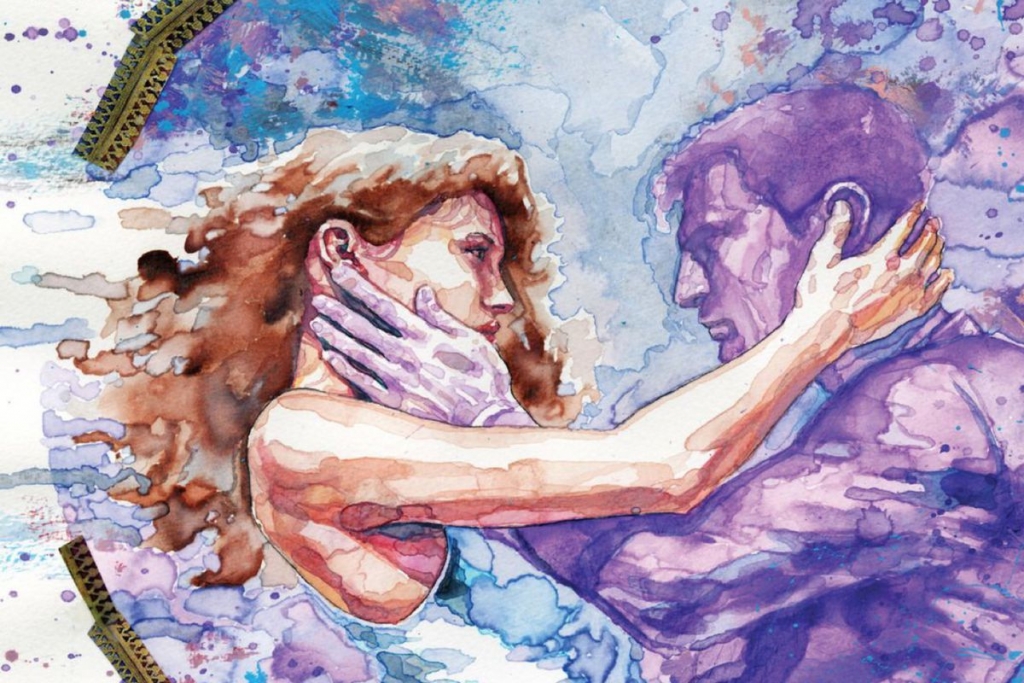 A hard boiled detective noir, Alias was the first in a new line of adult oriented Marvel stories. The mainstream Marvel universe was once described by Neil Gaiman as “magic”. A fascinating, adventurous place where iconic characters fight the good fight and saved the multiverse from danger on an average basis. In Alias, the veneer is stripped away, and we discover that the glossy entertainment normally found in these stories is just a façade covering up a world full of crime, sex and bigotry. Michael Gaydos’ signature artwork is a grittier lens through which to view the new perspective on what goes on in the world of Marvel.

Jessica Jones, a former superhero who operated under the codename Jewel, works as a private detective in a Manhattan flooded with superpowers and costumed criminals. Jessica is a former Avengers member whose adventures (drawn by the immortal Mark Bagley, the perfect contrast to Gaydos’ work) were cut short by the psychological and emotional damage caused by her encounter with the Purple Man, a supervillain who can make people do as he pleases simply by speaking.

Killgrave, as he became more commonly known after the reinterpreted version seen in the Netflix adaptation, is an example of the sinister undertones which plague much of the early comic book lore. 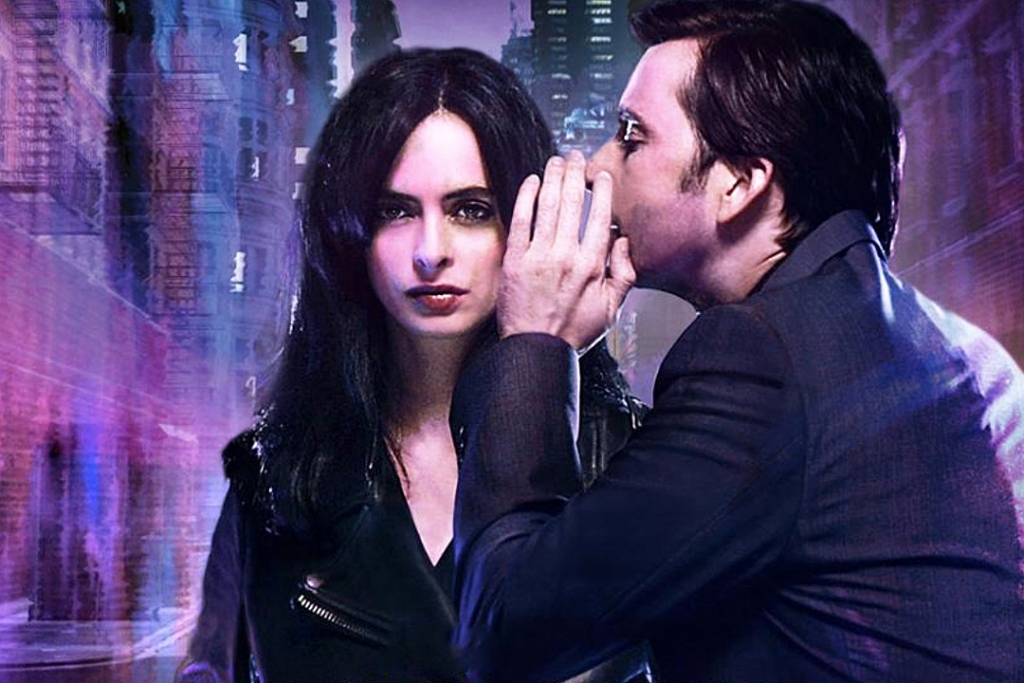 Nobody thought twice that a guy who can mind control with his voice could be way more frightening that the stereotypical villain role he was originally written for. Between being jaded from her personal experiences and the circumstances of the cases she works on, we become genuinely worried that Jessica may crumble under the weight of her unresolved pain and her altruistic impulse to help people. And on top of this, Killgrave gets a big twist: he is aware that he is a comic book villain. If everything is fictional, nothing actually matters. So if he’s written to be a monster, why not just enjoy it?

A big draw to these stories, especially for me, is the conflict between protagonist and antagonist. Bendis created the rivals of a lifetime in this revisionist Marvel story. Seeing the two mentally and physically oppose each other in two of the book’s arcs is a comic fan’s wet dream.

This isn’t the kind of writing people expect from comic books. This is taking comic book mythology and turning it into procedural drama. To the point where when you get to the final page, you’ve forgotten all this shit is happening in the same world as Spider-Man. 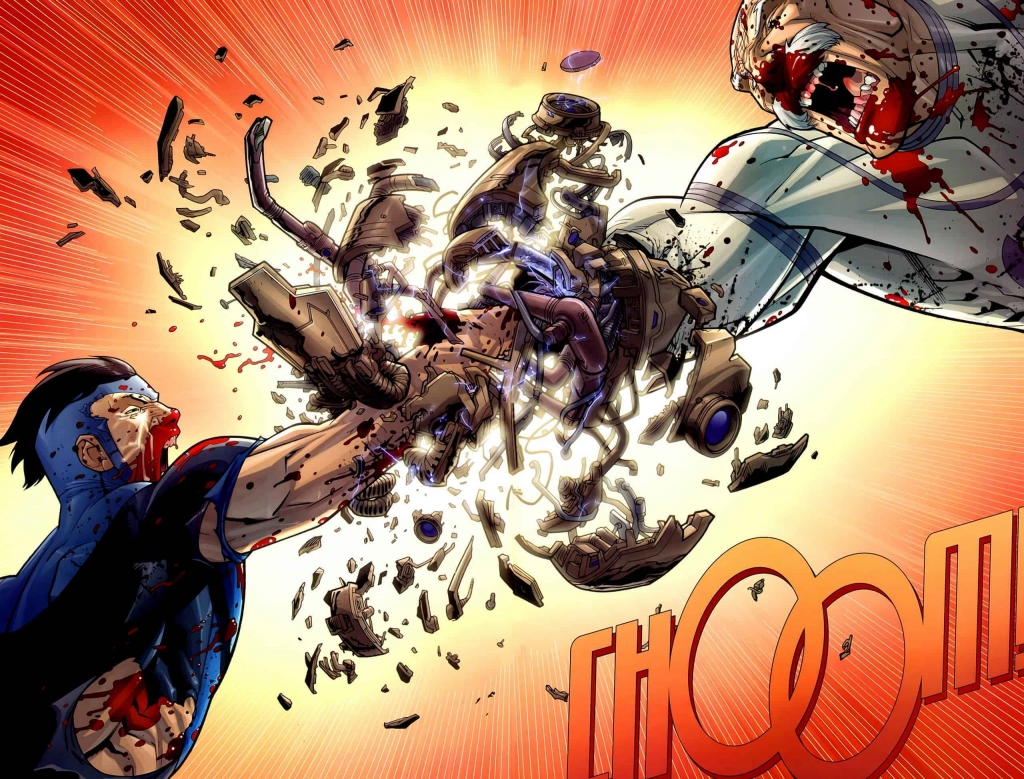 The story, on paper, sounds average. Mark Grayson is the son of the world’s greatest superhero, the leader of the team of superpowered beings who police the world. Mark and his father are of a race of aliens with a different biology, a convenient explanation for their powers. When he reaches seventeen years of age, Mark finally develops super powers of his own: flight, super strength and invulnerability among them. All decent superhero tropes. Then the big twist comes (SPOILER ALERT): Mark’s Dad brutally murders his team in their headquarters, the catalyst for his species’ invasion of the Earth.

It’s a gut punch that throws readers for a loop, saying, “Yeah. This ain’t your average superhero story.”

I can’t help but be impressed at the way the story embraces comic cliches yet still manages to surprise you. Serious issues end up being addressed, including family drama, violence, and even sexual assault.

That’s right. In a later story arc, Mark is raped by a woman.

Breaking the usual non-consensual stereotypes associated with this topic, having a superpowered man violated by an aggressive, indifferent female of his species is clearly written to make male readers feel genuine discomfort. I suppose you can only properly emphasize with this sort of trauma if you see it happen to a character which represents you better.

Many of the male readers come to these stories looking for an ideal character to see themselves in.

Batman is all about trauma, which is why a lot of people gravitate towards him. But Mark being raped is a comic book sequence that’s clearly meant to make you understand the immediate loss of dignity that comes with somebody not taking no for an answer. Kirkman has a natural talent for being able to do this so well in his storytelling. There’s a reason everybody cries when you mention the name Glenn. Here’s a tissue, I apologize. He uses the kind of stories he grew up loving to talk about the horrible things that happen to regular people in their everyday lives.

Now think about whether or not there’s any kids growing up reading Invincible like we grew up with Flash. Good thing or bad thing?

One more example, the aptly named X-Force: Sex and Violence. 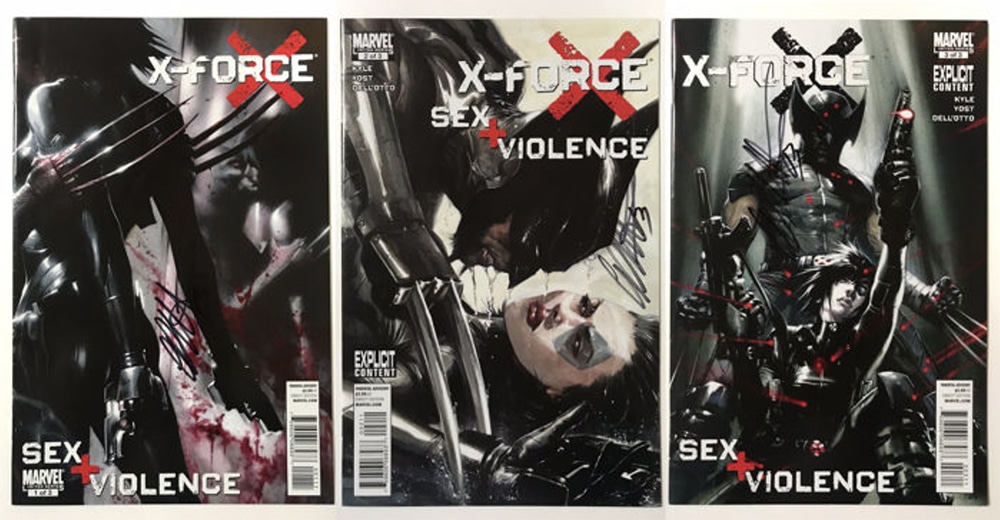 This is a mainstream Marvel book, people. And yes, that’s the real title.

A mini-event series, Sex and Violence follows former X-Force teammates Wolverine and Domino (these motherfuckers always have catchy names. I like it.). Gabrielle Dell-Otto’s always epic artwork depicts Logan (Wolverine’s real name, used more often than his superhero name) and Dom getting caught up in what ultimately culminates in a gang war of sorts between rival leagues of assassins. The story does live up to the title as the first half of the story is essentially one long chase scene culminating in Dom and Logan taking a break from the carnage with impromptu hotel room sex.

With these sorts of characters, it’s rarely about the actual story. It’s more the fanboy and girl excitement that builds up when you hear your favorite characters are meeting up. Here it comes with the promise that these two fan favorites will kill everybody that moves and then fuck each other. So informative to the eight-year olds who loves these books. Crime, murder, action, profanity and sex. It’s all here.

Now granted, this isn’t being printed with the delusion that a kid should be reading it. 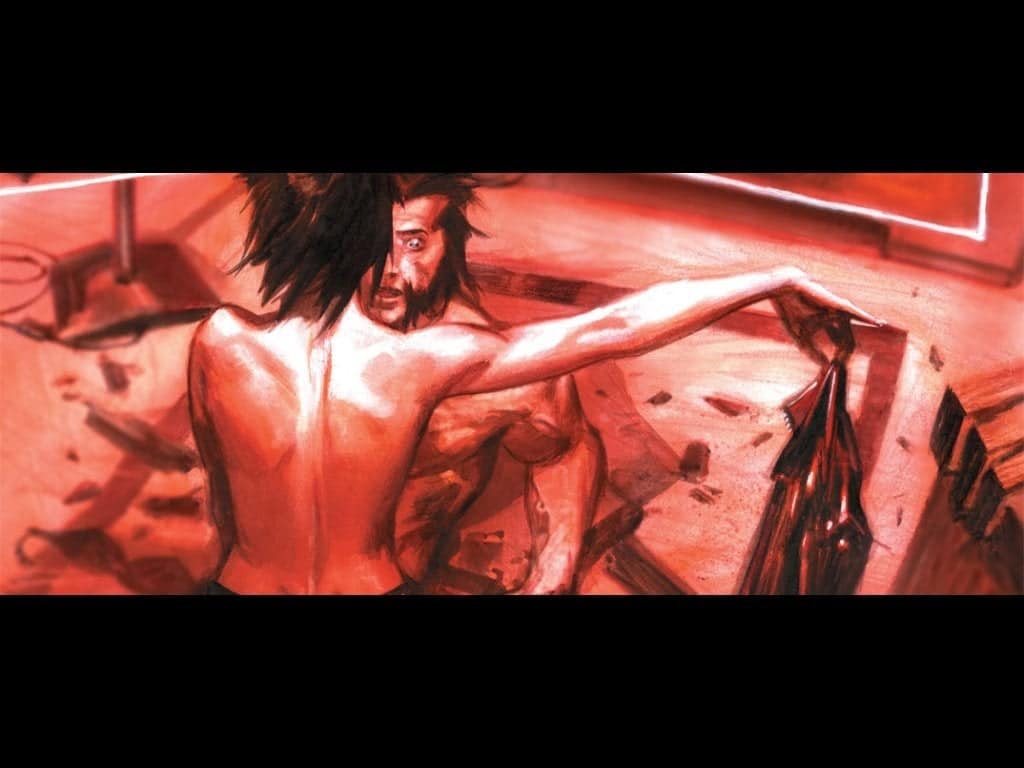 It’s obviously meant to be a grown-up story for an audience surprised to discover just how violent the people from their favorite cartoon can be. I mean, the dude has claws that pop out of his fist. There’s no clean way to depict that.

Dom has always been an underrated character. Her unconventional power set and “Baby I got me” attitude make her a joy to follow in whatever book she turns up in. Which is at odds with the way the character stills falls into the usual comic book approach to making females; angelic face, sexy body and wearing shit that would make strippers uncomfortable.

A story called Sex and Violence lives little to imagine about what’s going to happen, but people outside the comic community would be surprised to hear that it stars the character Hugh Jackman played regularly. Yeah, they figured he was violent… but not that violent.

There’s a scene where Logan gets shot in the face. For real. He’s invulnerable, don’t worry, but it looks like it hurt.

So why the drastic change in storytelling? 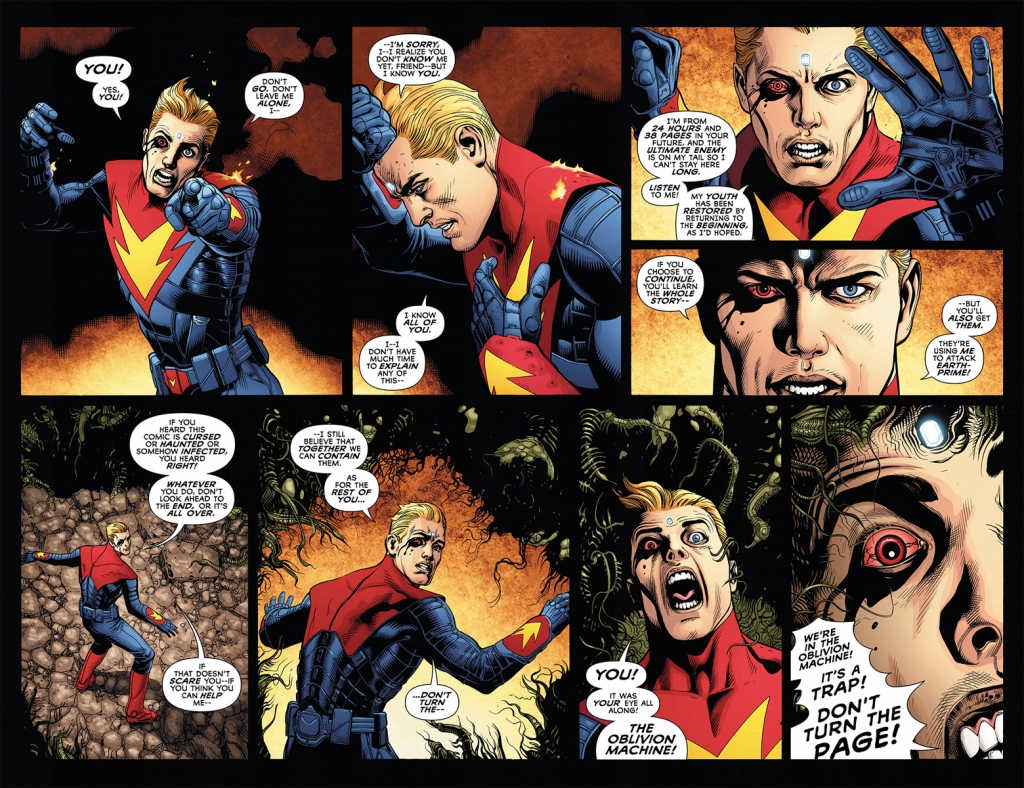 Did the medium just grow up, along with their audience?

There are still kids reading comics. But obviously, it’s much more marginalized than it used to be. Kids have new distractions, new ways to learn and be creative and use their imaginations. Comics have become a very niche market despite the fact they keep making tentpole movies based off of them. So the remaining audience are the people who’ve enjoyed them for years and then people discovering them in adulthood.

As a result, 60s era writing is not going to cut it anymore. Then we wouldn’t be able to keep pretending to take ourselves seriously. So now, it’s adult oriented. All about action and adventure and even occasionally a little bit of nihilism sprinkled in for good effect. Yes, they go that deep into these ideas now.

Multiversity was a DC story about saving existence from Lovecraft monsters. Isn’t it strange? So many stories — from literature to movies — can be boiled down to the same core conflict: us vs. the darkness. I suppose, after a certain amount of time, comics just began acknowledging this fact. Because the kids grew up.

It wasn’t just about hope anymore. It was about using hope to break through fear. A hope that the things you’re nostalgic for will always save you from the danger that is real life.

Comics got dark cause we needed to believe these characters would still prevail no matter what. Intriguingly, they did. Click To Tweet

Until next time, remember: a little sex and violence never hurt anybody. Well, both things definitely have hurt people, but…. okay, shut up, you know what I mean.