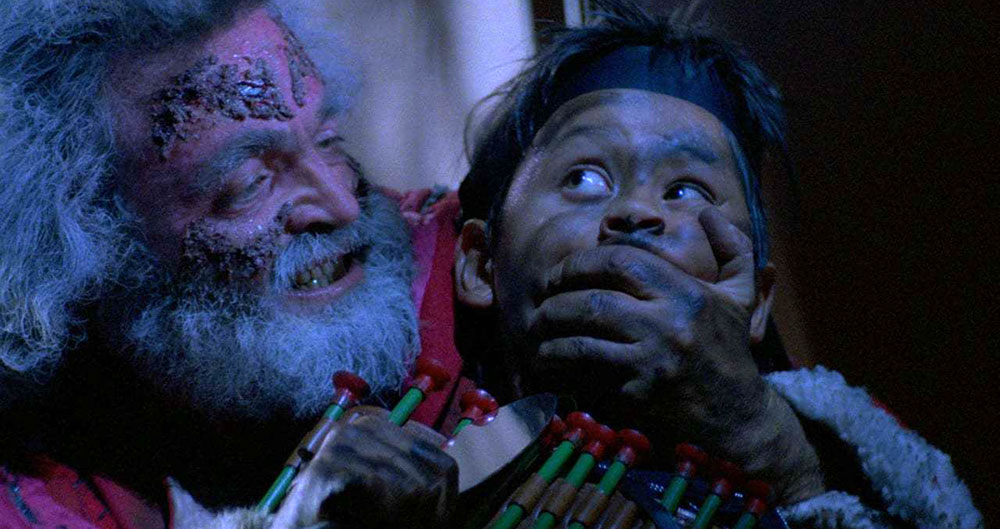 There’s something profane about Christmas horror. Not the religious holiday. You don’t see too many movies about zombified Maji, and maybe that’s an untapped VOD vein, but I mean the other Christmas. The one with the bell ringers outside CVS and the Mariah Carey song inside CVS and the Burl Ives snowman on network TV. It, too, has a judgmental if ultimately benevolent god at its center, but this one models for Coke.

Ten different versions of him just flashed through your mind, all more or less correct. Claymation. Light-up. The poor bastard at the mall. Tim Allen. Even if you can’t draw, you can draw Santa Claus. He’s a real sweetheart. A literal saint, actually. Gives kids presents, dabbles in arcane magic, leaves no carbon footprint on his commute. Take away the M&M commercials and he’s an 1,800-year-old folk hero poked, prodded, and polished into a pop ideal.

So when Santa or some escaped convict in a fake beard breaks in on Christmas Eve and gives dad a Ginsu the hard way, it’s nothing less than a personal betrayal. We know what he can and can’t do. If it’s an impostor — see: Silent Night, Deadly Night; Christmas Evil — they’ve broken an unspoken, festive code. If it’s actually Santa Claus — see: Santa’s Slay; Rare Exports — then it’s nigh unthinkable. Much in the way Women-Alone-When-A-Knock-Comes-At-The-Door is lazy shorthand for vulnerability, Killer-Claus is a slightly less lazy shorthand for, well, naughtiness.

It can be done well. But play with that fire and lose, then face the cleared collective throat of mom groups everywhere. 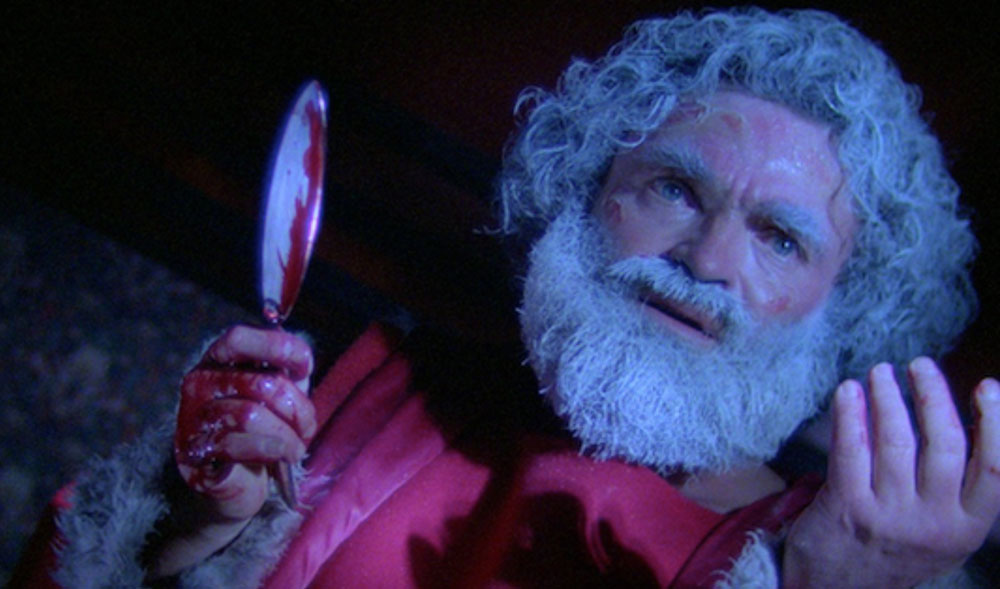 Not that I’d suspect many French mom groups would protest Deadly Games.

The Santa we know today is a chummy amalgam of  various saints and bearded strangers who’d leave oranges in the socks of obedient children. The primordial Kris Kringle of France is Père Noël, a snappy dresser who expected shoes by the fireplace full of veggies for his mule in exchange for gifts. That’s par for the course. But what might better explain the French disposition about Christmas as so vividly demonstrated in Deadly Games, original title 3615 code Père Noël, is the bad cop to Santa’s good: Père Fouettard.

Roughly translated as “Father Whipper,” he accompanied fellow Father (Christmas) on his ride, doling out punishment with a lash or stick or multiple sticks to the tots deemed unworthy of material reward. He dressed like a Bizarro Santa Claus and, depending on which backstory you believe, tagged along out of eternal penance for killing, cooking, and eating kids as a mortal.

Knowing that puts Deadly Games into a little better context. But even then, there’s not enough context in the world to make it seem conventional. 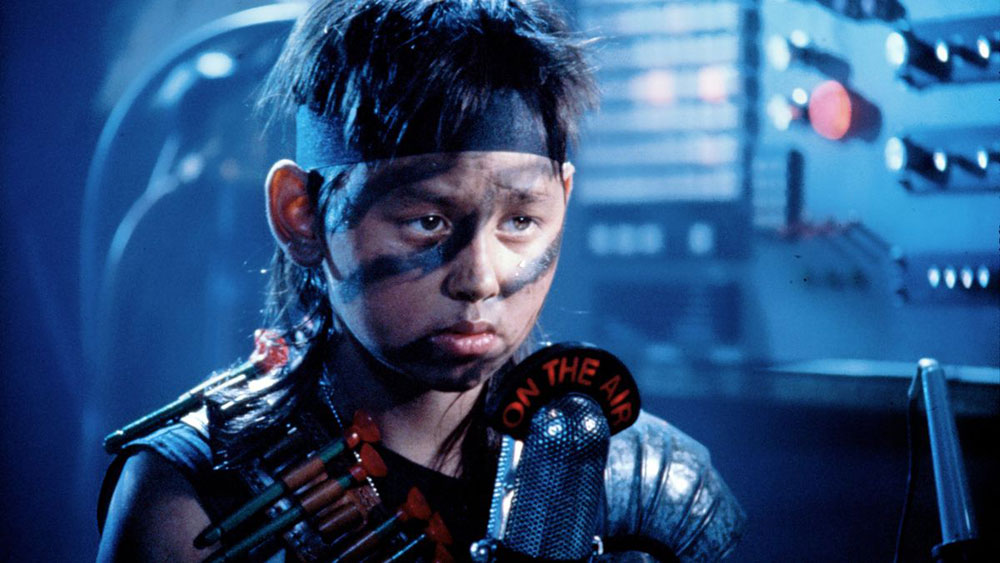 A working knowledge of ‘80s action movies does help, though.

Our scrappy and mulleted adolescent hero Thomas worships them. Writer-director René Manzor probably does, too — the kid gears up in a Fisher-Price recreation of Schwarzenegger’s legendary Commando montage. Little Thomas wakes up every morning, straps on his plastic grenades, and plays wargames with his beloved dog and blind grandpa in a clockwork mansion of labyrinthine galleries and after-market trapdoors.

And people thought the McAllisters lived lavishly. Thomas’s mom owns a chain of toy stores, meaning he gets literally everything he ever wants. Full-size fighter jet bed? Got it. A wrist gauntlet the size of a lunchbox that controls and all cameras and security measures across the house? Got it. A prehistoric computer with decent enough CAD software to render the grounds in three-seconds flat? Got it.

He’s also got an internet connection — or at least Minitel, the closest thing to it in 1989 — and it turns out that’s just as dangerous today as it was then.

Thomas is a smart kid — he casually fixes a car and takes it for a joyride in the snow — but still a kid. When someone claiming to be Santa, the Santa, responds to his electronic plea for proof, Thomas believes him. When “Santa” asks for his address so they can “play,” Thomas’s savvier, more prophetic friend Pilou tells Thomas that most strangers on the Minitel are deranged perverts. Fortunately for innocent Thomas, this particular deranged pervert forgot to feed another dollar into his metered Minitel. He’s kicked out of the chatroom and left with only the hint that the kid’s mom works at the biggest toy store in town. Unfortunately for innocent Thomas, that’s all this particular deranged pervert needs. 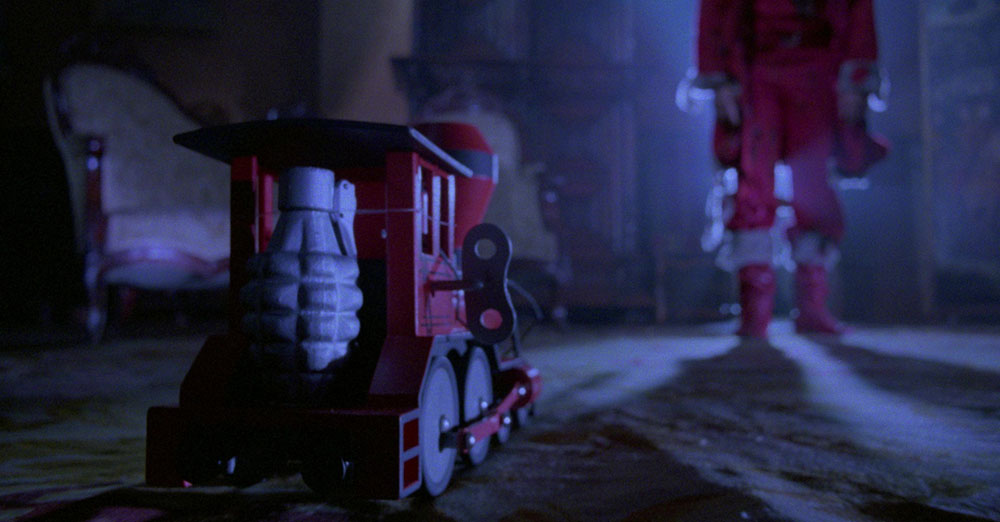 Deadly Games eventually turns into something of a slasher, and slashers are only as good as their boogeymen.

Credited only as “Le Père Noël” — that is, the real deal — Patrick Floersheim plays Santa as a Manson-eyed blank. Before he dons the usual duds, he’s just a wandering vagrant that joins a spirited snowball fight with the neighborhood kids. It’s a quaint scene, something that belongs in the porcelain township around Grandma’s Christmas tree. In that miniature, he’s a cuddly passerby distinguished only by his mud-brown beard and guileless smile. But scaled up and given life, he’s an immediate force of malevolent nature, the apocalyptic shake of a snow globe. He is more Father Whipper than Father Christmas, and given how similarly they dress, they’re indistinguishable in a blizzard.

To director Manzor’s credit, Noël’s obsession with children never tilts into the explicit obvious. When he does finally corner Thomas, he lets him go — it’s the boy’s turn to seek, after all. The closest it comes is when the lunatic gets a job as a sit-in Santa at the store Thomas’s mom runs. The costume works, but the fake beard leaves something to be desired, something he learns the hard way. 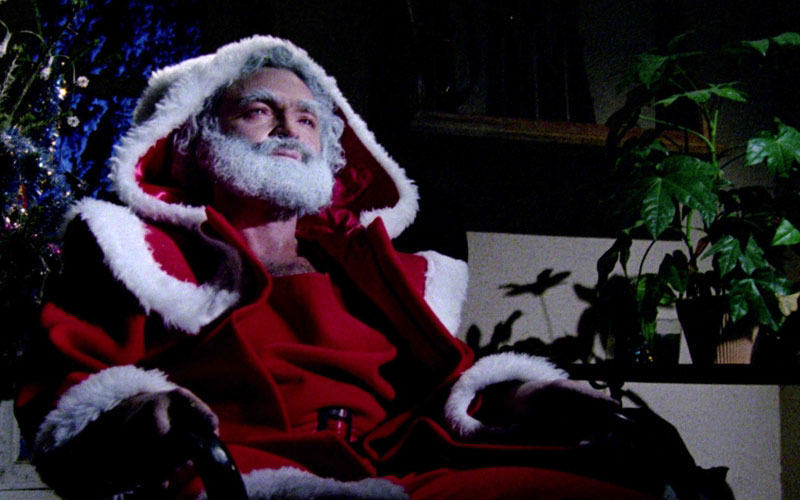 A little girl left alone wanders up to him and he takes her on his knee. Santa examines her tiny face with utter fascination. For a moment, it looks like a Hallmark ad. But then he caresses her cheek in a way that no mall Santa should. She interrupts his joy by calling him a phony and pulling off his bad beard. His glittery eyes roll over white, an acted special effect. He hits her, breaking the sacred rule, becoming the profanity of all Christmas horror movies in a single swing.

Noël does worse things in Deadly Games – a few other “sacred rules” are violently broken by the end – but that’s when the movie first shows its hand.

That’s when it gets good and weird.