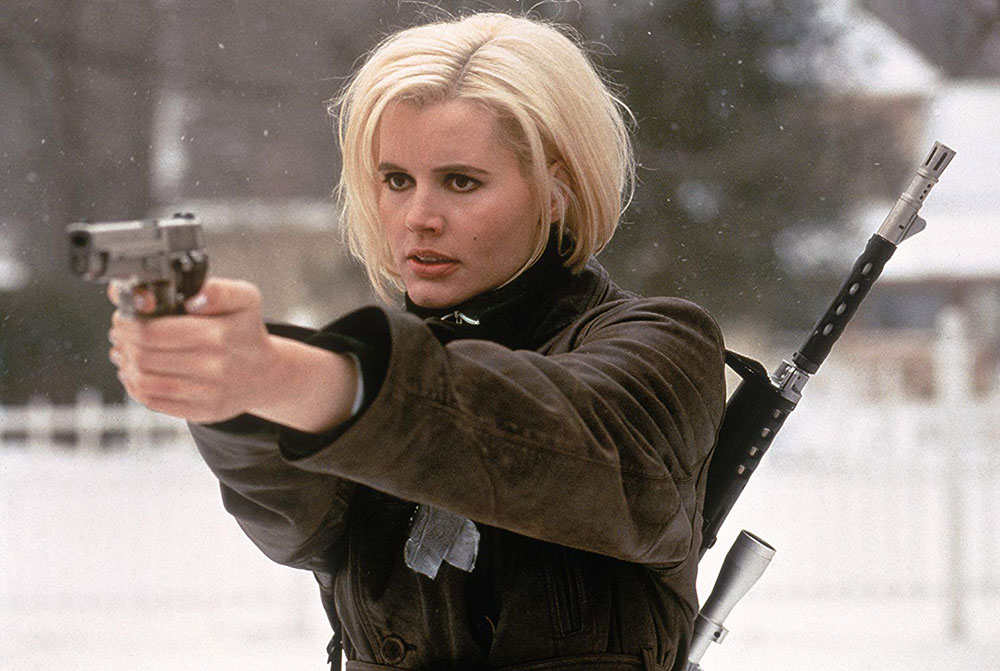 In the early 1990s, Renny Harlin was the hot new action director on the block. With A Nightmare on Elm Street 4 (which at the time of its release was the highest grossing independent film ever made), Die Hard 2, and Cliffhanger on his resume, Harlin had his pick of projects to choose from in Hollywood. What he chose was to bet on himself and his then-wife Geena Davis, the Academy Award-winning actress whose 1991 and 1992 hits Thelma & Louise and A League of Their Own solidified her as a Hollywood A-Lister.

The production company they created in 1994 was called The Forge, a multifaceted deal in association with New Line Cinema that produced and developed not only film projects, but also TV, magazines, video games, and even theme restaurants. The company would naturally also be used to further Geena Davis’s career.

The Hollywood power couple’s first film from The Forge was the 1994 romantic-comedy Speechless (reuniting Davis with Beetlejuice co-star Michael Keaton), which earned Davis a Golden Globe nomination. In 1995, Harlin cast Davis as the lead in his big budget, Christmas release, pirate swashbuckler Cutthroat Island, the first action role of Davis’s career. The film would famously become one of the biggest box office bombs of the decade losing, at the time, a record amount of money and sending Carolco Pictures into bankruptcy.

A mere 10 months later, and with the bad publicity and performance of Cutthroat Island still fresh in the minds of moviegoers, the deck was stacked against Harlin and Davis’s 1996 effort, a Christmas time-set action movie called The Long Kiss Goodnight. 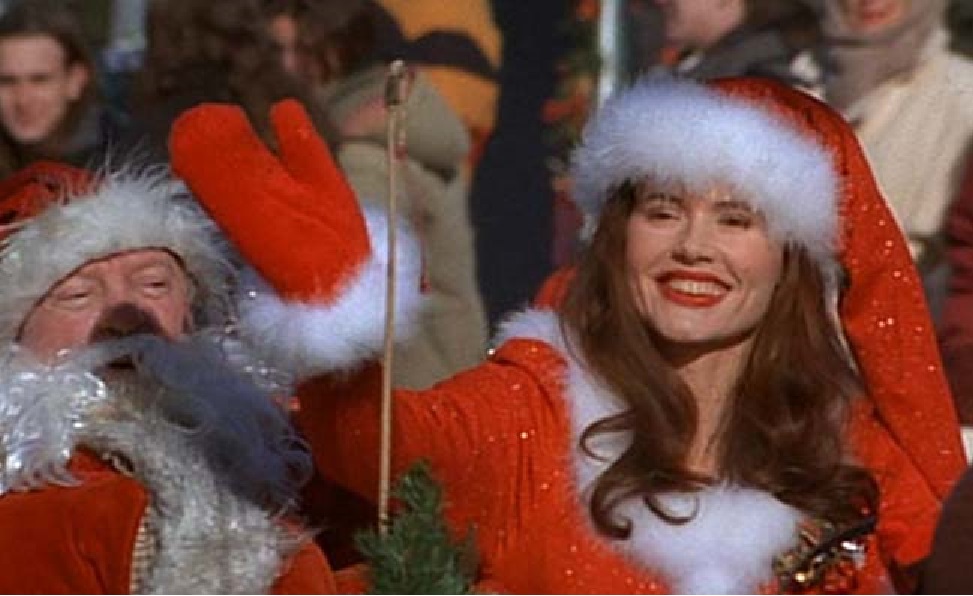 New Line Cinema was known as “The House That Freddy Built”, finding success and notoriety with the lucrative 1984 horror hit A Nightmare on Elm Street.

Welcoming Harlin back into the fold after 1988s A Nightmare on Elm Street 4, the studio chose to produce The Long Kiss Goodnight, which saw Geena Davis returning in an action role. Davis would play Samantha Caine, a woman with amnesia who begins to remember her past as a lethal assassin named Charly Baltimore.

New Line Cinema had made a name for itself with low to medium budgeted genre films, but the company looked to break out with larger fare in 1996. New Line’s three attempts at a blockbuster that year were the Bruce Willis action-crime movie Last Man Standing, the notorious Marlon Brando-Val Kilmer pairing in The Island of Dr. Moreau, and Harlin’s explosive The Long Kiss Goodnight. All three titles severely under performed.

The Long Kiss Goodnight opens with a  voice over from Davis’s Samantha Caine explaining her amnesia and how she can only remember the past 8 years.

Living the small town life as a teacher with a family, Samantha is happy with her quiet life. She rides in the town Christmas parade, vacuums the house, and struggles to cut up carrots while preparing dinner. Geena Davis has a naturally wholesome look, perfect for Samantha’s salt-of-the-Earth character. But when her past starts to come back to her after a car accident, like showing some uncharacteristically sharp skills at home with a kitchen knife, she flashes her wide, mischievous smile which releases a crazy glint in her eye. 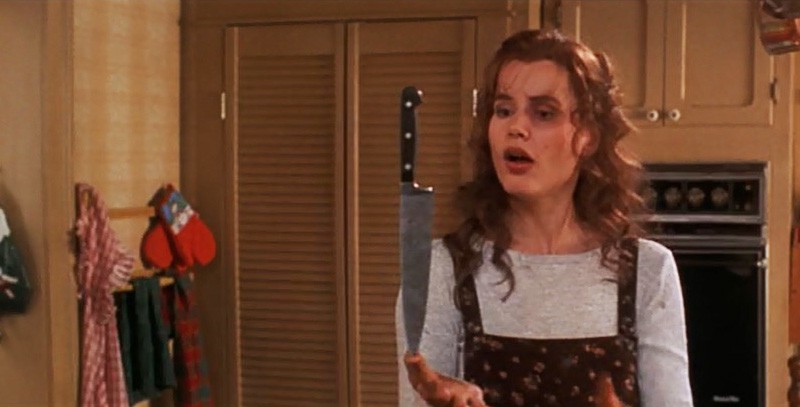 It’s a great moment that lets the viewer know they’re in for a treat.

As Samantha remembers her past, her lethal and sexy alter-ego Charly Baltimore is shown to her in dreams or glimpses in mirrors. These moments are b movie gold in what looks like a 1980s rock video, complete with mountainous rocky cliffs under dark blue and purple stormy skies with flashes of lighting. Charly is one bad ass chick who accelerates the heart rates of viewers. “Do you want a cigarette,” Charly asks Samantha through a mirror, “I don’t smoke,” she responds. “You used to,” Charly says back, with that crazy glint in her eye, a characteristic that serves Davis well later in the film when Charly Baltimore takes over.

Naturally, now that Charly is back and alive, there are bad guys from her past who want her dead. And… action!

In the beginning of the third act, Charly is being locked in a freezer and left for dead. With her head slightly tilted, strands of bleach blonde hair hanging carelessly in front of her unblinking eyes, she looks up at her captive and says, “You’re going to die screaming, and I’m going to watch.” The captive and villain of the film is played by Craig Bierko in his feature film debut, a role he spent weeks training for in weapons and martial arts classes.

After her promise/threat, Davis steadily grows that wide smile of hers into an ‘I-dare-you-not-to-believe-me’ grin that lifts on one side so high it arches an eyebrow, with that crazy glint on full display in her eyes. Charly is down but not out, and letting the viewer know that fireworks are coming. 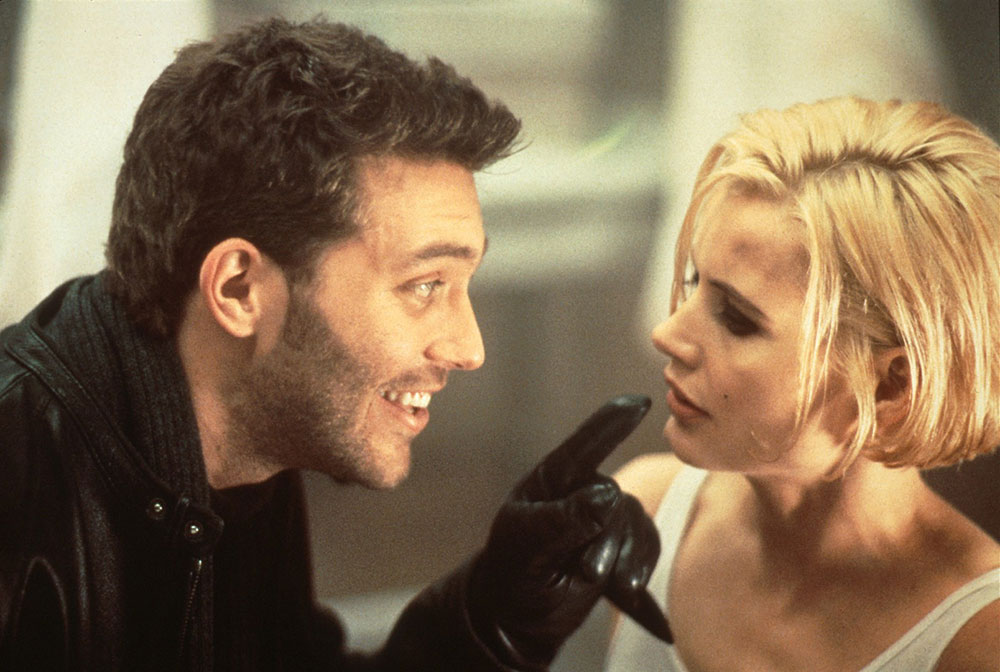 Davis is having fun with this role, and it shows.

She plays Charly with uninhibited recklessness, a devil may care swagger underlined by dark mascara and locked in place with a loaded gun to the face.

Samuel L. Jackson is his usual likable self as Mitch Henessey, a former cop turned small time hustler who gets caught up in Samantha’s/Charly’s situation. He plays Hennessy with his staple tough guy, get-the-fuck-outta-here demeanor and is never at a loss for the perfectly timed, laugh-out-loud one liner. But Jackson is more vulnerable than usual here with his character being just a little out of his league in this world of high profile, government assassins.

As Henessey struggles to keep up with Davis’s Charly, the chemistry between the two actors gets stronger, and the film is tremendous fun because of it.

Early cuts of the film had Henessey dying, but the test audiences hated it so it was re-shot, leaving him alive. In January of 2019 on the Tonight Show with Jimmy Fallon, Samuel L. Jackson said Henessey in The Long Kiss Goodnight was his favorite role and that he “loved working with Geena Davis.” And to think they almost killed off such a likable character!

Trouble and tragedy occurred during the production while filming at The Windermere House, a 100 year old, historic hotel in Muskoka, Ontario.

On February 27, 1996, the hotel was completely destroyed by a fire that some claim happened because of the production’s lighting equipment. Other theories point to faulty circuits within the hotel itself, but to this day it remains a mystery as to what started the blaze. The production for The Long Kiss Goodnight moved to Collingwood, Ontario for re-shoots, and The Windermere House was rebuilt and re-opened by Summer of 1997. 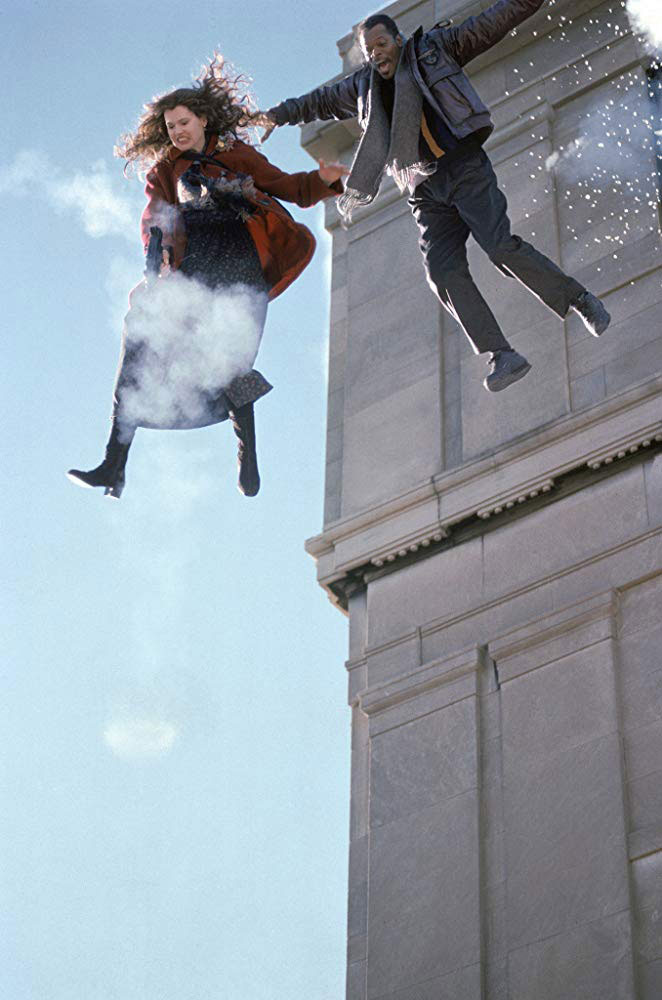 Littered with snowy back roads in small towns, multi-colored stringed lights, festive music, and holiday cards, The Long Kiss Goodnight is a  film that drips with Christmas in every scene.

This holiday setting is one that writer Shane Black has utilized in several of his scripts and films, including Lethal Weapon (1987), his directorial debut in 2005’s Kiss Kiss Bang Bang, Iron Man 3 (2013) and 2016’s The Nice Guys.

Released October 11, 1996, The Long Kiss Goodnight earned a weak $9 million from 2,245 theaters across the United States. It would go on to gross just over $33 million domestically against a budget of $65 million, officially labeling the film a bomb and arguably ending the movie career of Geena Davis, and that’s a damn shame. It also dashed any hopes for a possible franchise, with a sequel tentatively titled The Kiss After Lightning already an idea. 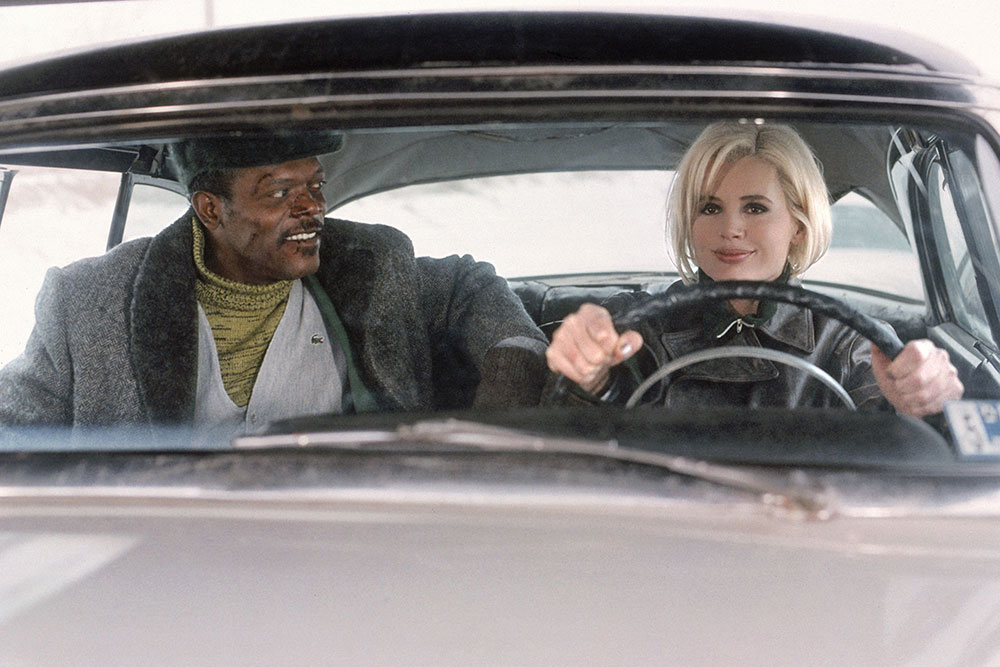 It may be too late regarding Renny Harlin and Geena Davis, but The Long Kiss Goodnight has rightly gained a hell of a following and is now recognized as the kick ass, outrageously fun action flick it’s always been.

It’s too bad audiences didn’t realize this at the time. It would have been great to see Geena Davis load up some guns and go blonde again in another action packed go around as Charly Baltimore.

Director Renny Harlin has stated the confusing advertising played a part in the film’s poor box office performance. One can see where Harlin is coming from when watching the original trailer and TV spots on YouTube. While the trailers do show the action, they also portray an overly comedic tone, singling out funny lines and zany looks with ‘Who Are You?’ by The Who playing in the background. The Long Kiss Goodnight does have plenty of humor, but it’s not a comedy. And the advertising made it look lightweight and passable when the film is anything but.

Writer Shane Black wondered if the film may have made more money had the lead been a man. Even New Line Cinema considered, briefly, changing the role of Samantha Caine/Charly Baltimore to a male. Had they done so, the alleged replacements for Geena Davis included action superstars Steven Seagal and Sylvester Stallone. Thankfully they thought better of it because Davis owned this role. Even Black ultimately said, “It had to be a woman. The lead had to be female.” 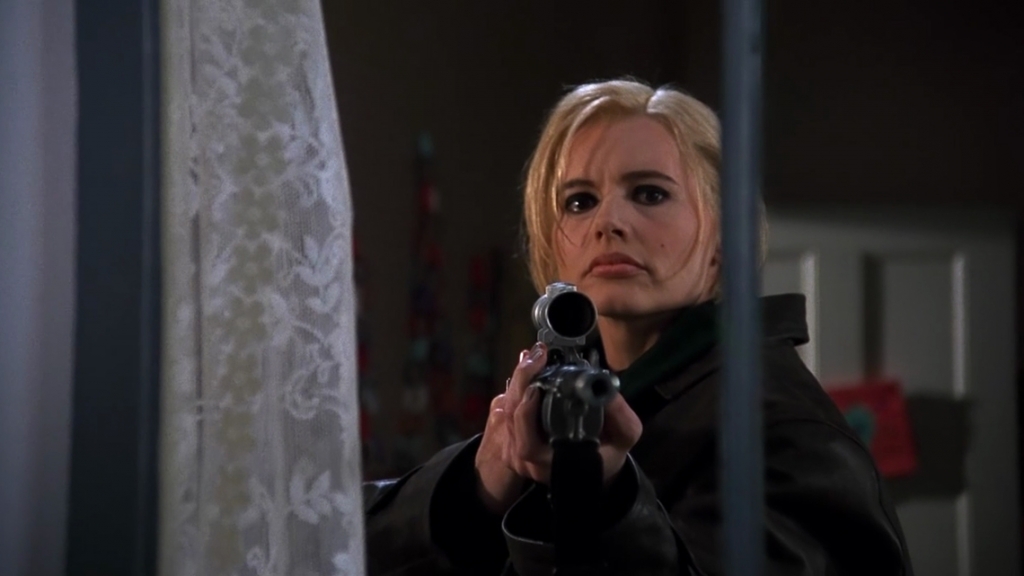 There’s a fantastic sequence in a train station that involves gun play with a group of baddies, papers flying around like snow as suitcases and briefcases get shot open, the atmosphere shrouded in smokey chaos. Samantha (not quite Charly yet) and Henessey have to outrun an exploded grenade, leaping out of a third story window with the fiery blast bursting outward above them as Samantha fires her gun rapid fire to break the ice below to soften their fall. All while Alan Silvestri’s score plays over the action, one of dangerous discovery, the soundtrack of impending explosive adventure.

We may never get a sequel to The Long Kiss Goodnight, but we don’t need one. This film has enough charisma and action to be enjoyed every Christmas.

A double identity with a secret past, menacing villains hanging from helicopters, huge explosions, shooting guns while ice skating, and Geena Davis cutting down a flaming corpse to rocket herself skyward while hanging onto a string of Christmas lights, bringing her level with the villain in a helicopter so she can shoot him down.

“Die screaming, mother fucker,” she yells as Bierko’s villain falls to his death on top of a big rig harboring a bomb. This is a tremendous moment with Davis looking insanely hot and completely badass, bruised, battered and fighting like hell.

Festive action to all, and to all a long kiss goodnight!

MAKE IT A DOUBLE FEATURE!

Pair The Long Kiss Goodnight with Kiss Kiss Bang Bang (2005), the directorial debut from Long Kiss writer Shane Black. Kiss Kiss Bang Bang also festively takes place during the Christmas season and features a fast-paced, action-packed script. Starring Robert Downey, Jr. (in a role that inspired director John Favreau to cast him as Tony Stark in Iron Man), Val Kilmer (who allegedly suggested that Kiss Kiss Bang Bang be the film’s title), and Michelle Monaghan (in a performance that will boil your eggnog).