Takeshi Kitano’s “Violent Cop” is a nihilistic and unforgiving film that doesn’t glamorize or stylize violence, but rather revels in its bleak brutality. 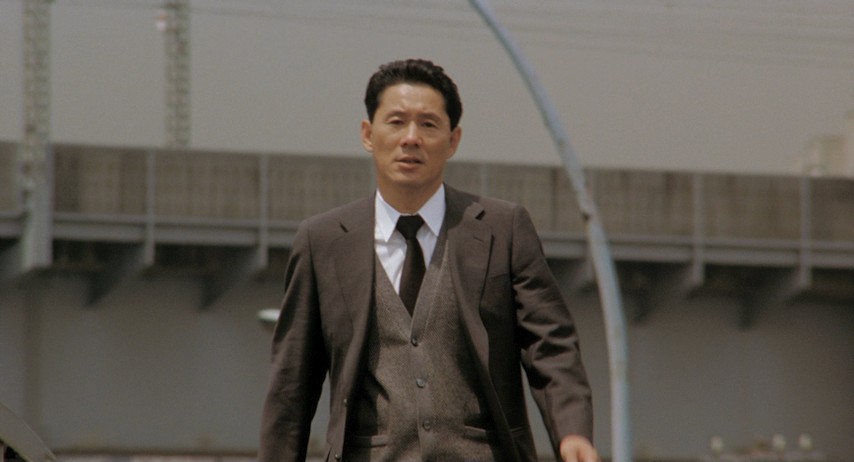 Dirty Harry quit at the end of the first movie. Four sequels and nearly fifty years removed, it sounds like one of those false memories. I could swear there was a scene where Clint looks at his badge and throws it away like a skipping stone. Harry Callahan couldn’t have turned in his resignation yet — he didn’t say “Make My Day” yet and, more importantly, neither did Ronald Reagan.

Long before Dirty Harry became damning shorthand for the American Way and the prototypical “Good Guy With A Gun” for Second Amendment enthusiasts of a certain age, he was a semi-infamous San Francisco inspector on the trail of a serial killer in a justice system that cared more about bureaucracy than a body count. He colored outside the lines and the department turned its back on him, so he did What Had To Be Done. The system still failed. Failed the victims. Failed the city. Failed him, the only cop willing to do What Had To Be Done. Of course he quit — he’s a Good Cop. 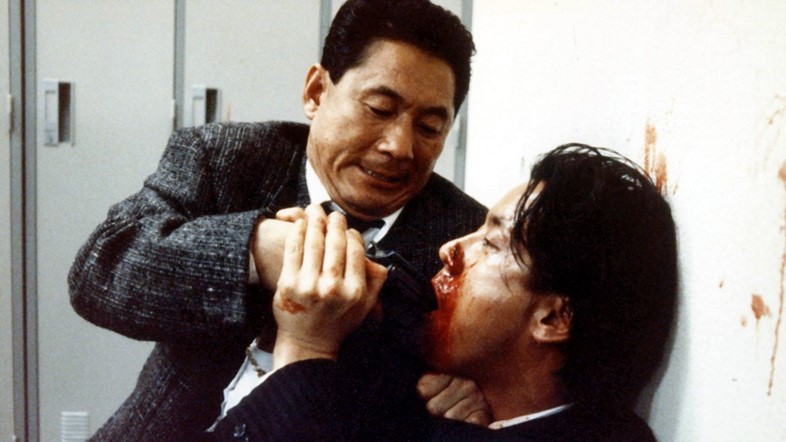 Violent Cop doesn’t editorialize that much. Even the title shakes off the interchangeable pre-Seagal wordplay — without looking, put The Enforcer, Sudden Impact, and Magnum Force in the right order. Like those, it’s a movie about a violent cop. He gets a wide-eyed rookie partner that doesn’t know any better. The brass might appreciate his results, but they still yell about the mess. He colors outside the lines, too. But he doesn’t get a catchphrase, the toe-tapping funk of Lalo Schifrin, or four sequels. This violent cop doesn’t even draw his revolver until the last twenty minutes, and even then, it’s of a conventional, non-phallic caliber.

Detective Azuma makes his grand entrance following a teenage bicyclist home and politely knocking on his front door. The boy’s mother answers. Azuma announces himself as a police officer and steps right in. She’s naturally startled, but Azuma assures her from halfway up the stairs, “Just leave us alone, don’t worry.” He knocks again at the boy’s bedroom. A cheap plastic devil mask leers at him from the door, an apt metaphor for the casual kind of teenage malice usually written off by pearl-clutching parents as Kids Being Kids. Like the way this particular teenager beat a homeless man to death with his friends not an hour before. 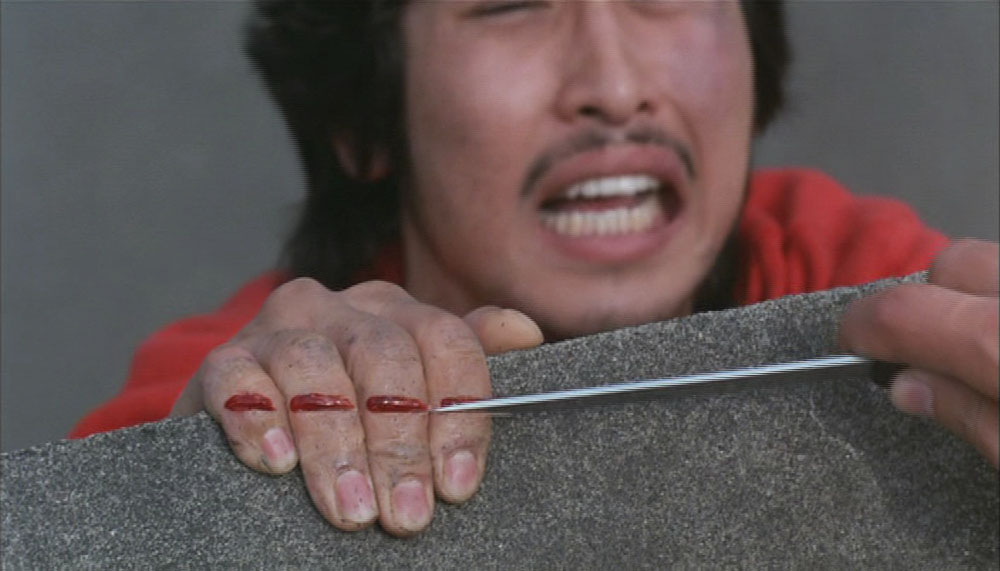 When he answers, Azuma knocks him to the ground with a single punch. The boy screams, bleeds as the cop herds him across the room with the business end of his wingtips. We only see his kicks from the waist up, only the mechanical exertion. By the time the camera pans down, the boy has a broken nose and nowhere else to crawl. We don’t see the violence, only the bruise. They skip the cool part. When Azuma switches to his trademark slaps, as close as Violent Cop gets to a running gag, the boy cries that he’s innocent, that he did nothing. Azuma smacks him again. “Then I’m doing nothing, too.”

It’s no “Do you feel lucky?” but it’s a lot more honest. The next morning, one of Azuma’s coworkers congratulates him: the teenager turned himself in. Azuma nods, then gets back to his cigarette. Criminal caught. Job well done. Rinse. Repeat.

If Dirty Harry is a lone wolf hero hogtied by silly human rights violations and departmental incompetence, Azuma is a known liability who’d like to warm his desk chair as long as possible. When the new police chief admits, “Off the record, I like your style,” and asks him as a personal favor to play nice until he transfers out, Akuma walks away. No butted heads or gnashed teeth. He’s not about to argue with his boss. He’s similarly silent during the increasingly warranted reprimands to come. 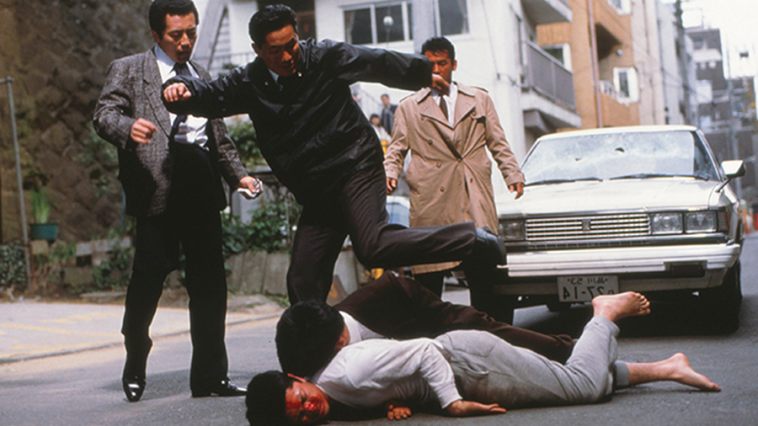 When he finally presses his luck too far with “planting evidence, false arrest, and torture,” Azuma is fired. He doesn’t say another word for the rest of the movie. And he doesn’t need to.

At the time, he was best known as “Beat Takeshi,” one of Japan’s hottest stand-up comics. His wild popularity forced him behind the camera — Kitano was concurrently starring in around seven TV weekly TV shows and no director could shoot on that schedule. Once he took over, he reworked the script, originally written as a comedy, into an opportunity to establish himself as a dramatic actor. Problem was, Kitano never paid much attention to movies, let alone how they were made.

His self-conscious solution was to keep the camera still and rolling. In his own words, “When you move the camera, you get stuff into frame, you never wanted there.” The result is a familiar crime story played in permanent montage. A footchase that could be underlined and exclamation-pointed with Starsky & Hutch’s finest wocka-chuh-wocka is instead haunted by Daisaku Kume’s lilting piano and lonesome sax. 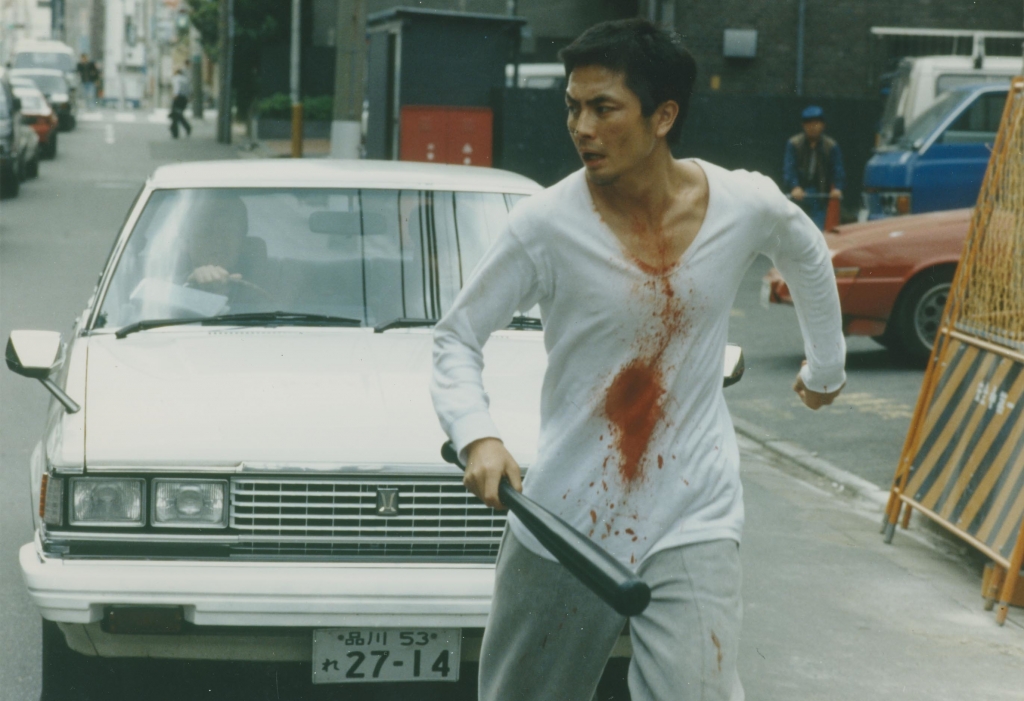 No quick-cuts on frantic Adidas. No asphalt rhythm of pounding feet. Kitano lingers on Azuma’s determined exhaustion and lets the sound of smooth jazz futility do the rest. Violent Cop skips the tourism-board sightseeing of its contemporaries. Instead, Azuma wanders a geometric hell of crumbling apartment towers, white columns like backward prison bars, and checkerboard ceilings in fluorescent blue that seem to stretch on forever. All still, quiet, until time itself forgets its priorities.

A confrontation between Azuma and a friend-gone-dirty boils down to a few static shots from across the street. Framed in separate windows of a busy diner, they stare at each other and say nothing. That’s all we get and all we need.

The detached pace makes the violence that much more startling — it never falls on the beat. Blood spills when you forget it might, in takes longer than we’re used to, that aren’t flashy enough to tip their hand. Fewer bullets fly than you might expect — a reminder that Japan has some of the strictest gun control laws in the world — but when they do, they hurt. A random passerby stops to watch a scuffle and catches an accidental bullet to the forehead. Her friend screams. We never see either of them again. 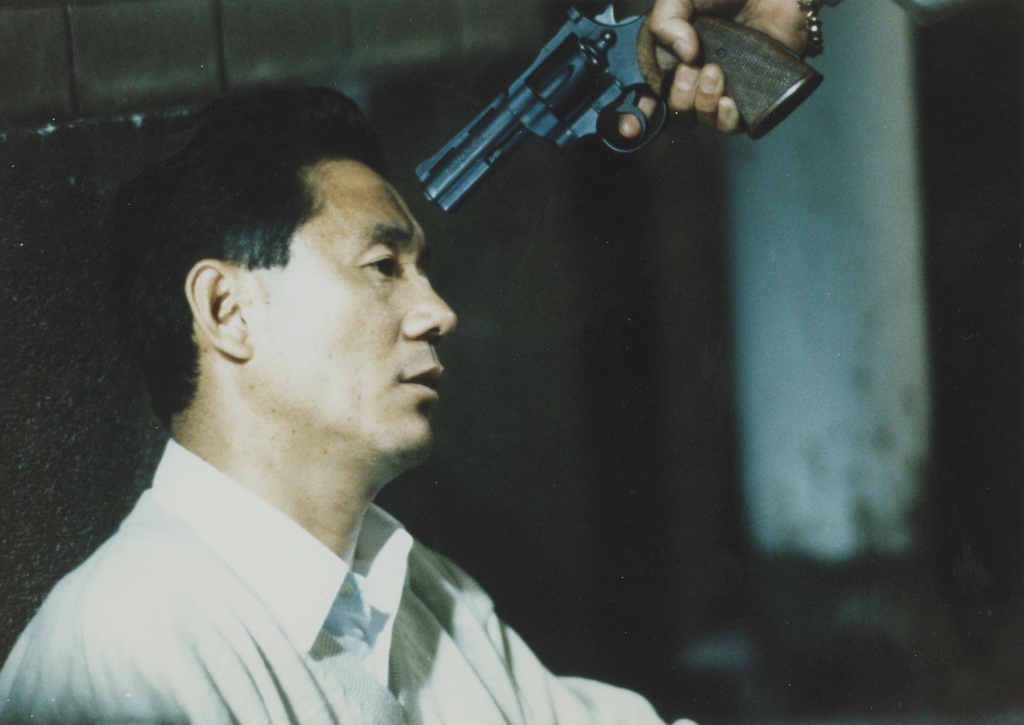 It’s not cool or particularly stylish. It’s ugly, pointless, and inevitable. Like all the violence in Violent Cop.

This was a tough Shudder Sunday to write because every deafening silence speaks volumes. I wanted to talk about Azuma’s parallel rise and fall to the killer he’s chasing. The pitch-black humor, like when Azuma and his rookie partner accidentally run over a suspect and stare out the windshield a while, hoping he gets back up. The fact that Azuma only smiles when said rookie partner gets his ass kicked. Or the movie’s frank handling of, fair warning, rape and suicide — neither gussied up nor glossed over, making them all the more potent. I certainly don’t want to let down the ending, which descends into the kind of nihilism that usually comes pre-packaged with neon and ironic synth today. 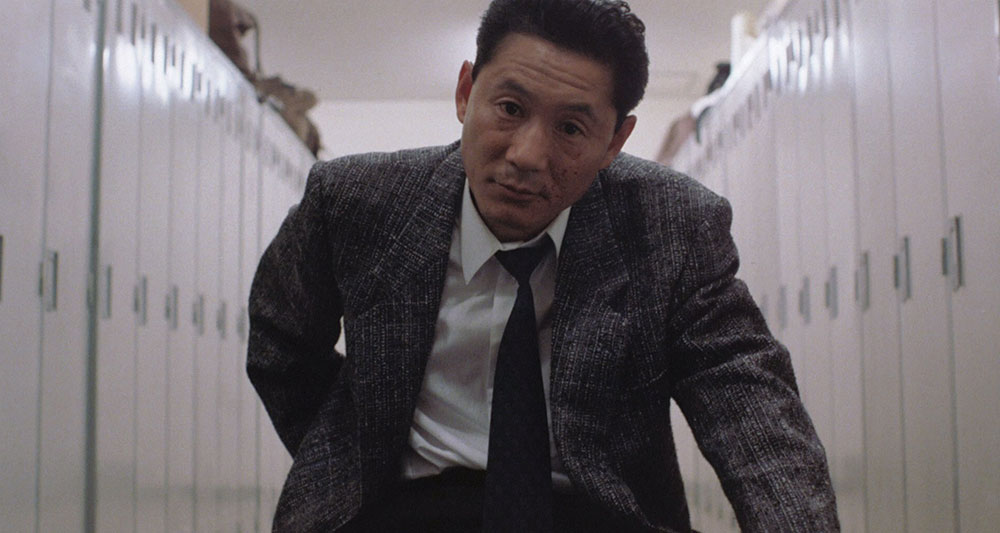 Best I can do is sum it up in a single image. Azuma sits at the end of a locker room bench. He is the one point in this one-point perspective. The lockers and everything else end with him. A light behind his head provides a pedestrian halo. He keeps a pleasant expression on his face and one hand behind his back. He looks directly at his suspect, directly at you, with eyes that show less emotion than security cameras when they want to. And he’s daring that suspect to pick up a knife so he can draw his gun and kill them properly.

To Make His Day.