An unabashedly proud celebration of girl power, “The Reckoning” is also quite an entertaining and well-executed film from a genre icon. 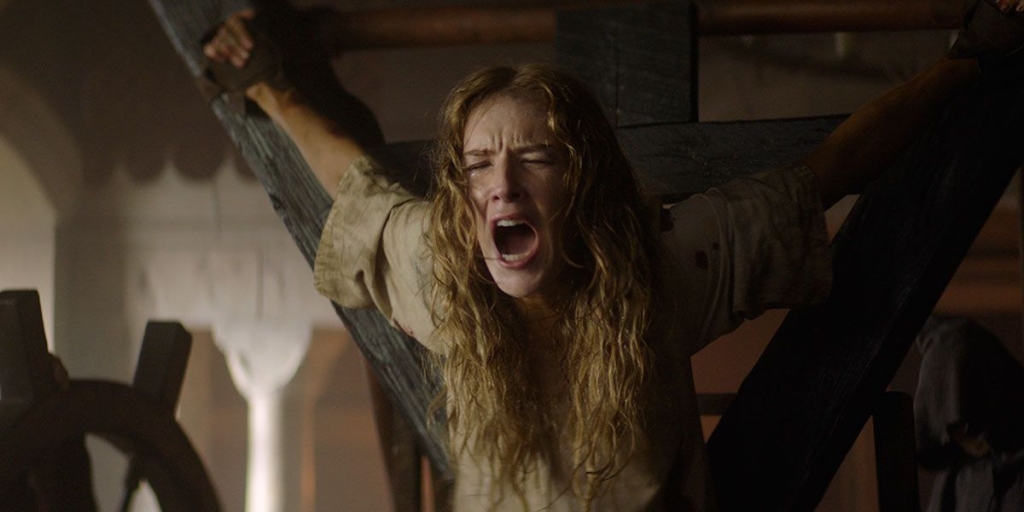 “Grace, a young widow haunted by the recent suicide of her husband Joseph, is falsely accused of being a witch by her landlord after she rejects his advances.”

It’s been a while since I’ve watched any of those old classics like Witchfinder General (a.k.a. The Conqueror Worm, 1968), so I was pleasantly surprised to see a return to the sub-genre of witch persecution horror championed in the beautifully filmed Shudder original The Reckoning (2020).

Not that there hasn’t been plenty of folk horror in recent years, but the specific Church vs. Witch goodness that took over British cinema for a while in the late ‘60s and early ‘70s — and which captures the imagination again from time to time — is especially pertinent in today’s sociopolitical climate, for better or worse.

There is a bit of silliness, including townsfolk who are a tad overzealous about burning witches, almost to the point of self-parody, but it’s nothing any worse than Vincent Price being the only character in a British film without an English accent and no one batting an eye (such was his stature at one time).

And there is an excellent Witchfinder General in The Reckoning in the form of Sean Pertwee (yes, son of Third Doctor, Jon Pertwee, for you Whovians, or Sergeant Wells in Dog Soldiers for the horror hounds) who would certainly give ol’ Vinnie a run for his money in terms of owning every scene he’s in.

But for a self-described “adventure horror” film, it is rather a slow burn.

Go into it knowing that, and you may just enjoy this familiar-feeling, but well crafted, tale of lost love, dark spirits, and papal corruption.

The Reckoning boasts solid performances from several well-fleshed-out characters, especially body-positive Charlotte Kirk, who not only carries the film effortlessly but co-wrote it as well.

Filmed entirely in Budapest, Hungary in 2019, its pandemic connotations are purely coincidental, which is a blessing in disguise really, as the viewer doesn’t get beat over the head with over-the-top plague similes as in other recent films.

Rather, the viewer is beaten over the head with the sort of girl-power theme which you would expect from a witch hunt movie at the Turn of the Tweens.

This is easily counter-balanced, however, by the blatant misogyny apparent throughout the film, from physical abuse to sexual, from mansplaining to gratuitous sex and nudity. And really, don’t we grade these things on a curve in horror movies?

From my perspective, if the lead actress doesn’t mind sharing a reminder that women are the pinnacle of creation, who am I to complain?

So yes, there is plenty of eye candy, a lot of girl power, satisfying instances of the mean old Catholic Church getting some comeuppance, and a really scary nun who is part ninja, part Freddy Krueger (the intense Suzanne Magowan).

For Shudder, it doesn’t get much more entertaining than this.

What you may not expect is to actually enjoy it, which I found myself doing. This is in large part due to some very strong performances from the aforementioned leads as well as some captivating location photography, masterful editing, and a stirring score by Guillermo del Toro collaborator Christopher Drake.

Despite my tongue-in-cheek nods to its female solidarity (which are about as subtle as Black Belt Jones), The Reckoning does manage to play to its strengths at the right moments and keep the viewer invested in its story and characters.

The director, Neil Marshall is also responsible for The Descent (2005), which streamed its way into the nightmares of millions.

I would say The Reckoning is nearly as good, it’s just a different kind of scary.