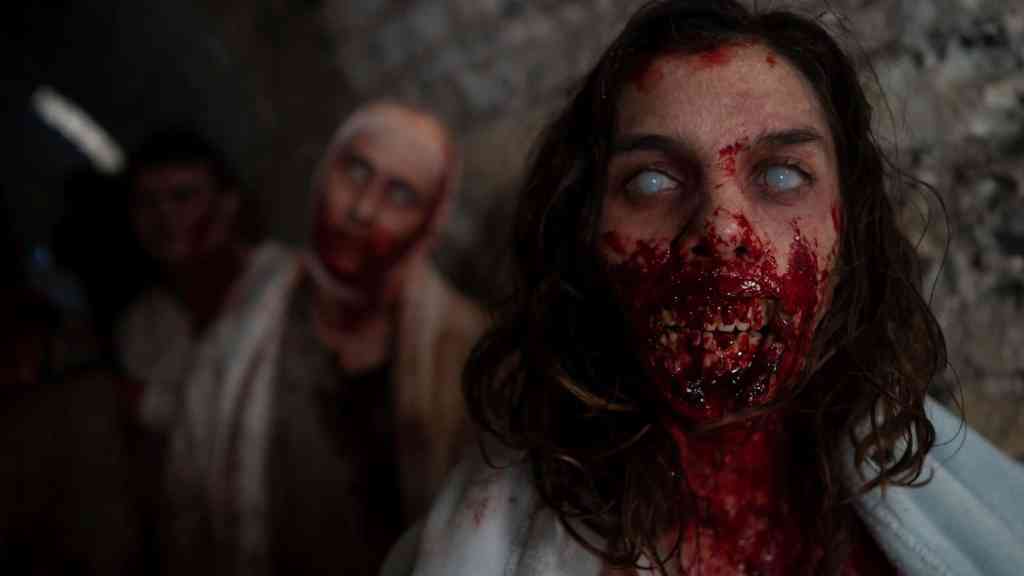 Director Lars Damoiseaux, who also wrote Yummy along with Eveline Hagenbeek, has given us a gore-soaked Zombie movie that instantly reminded me of some of my favorite 80s films, including Re-Animator and The Evil Dead, but it finds its own style as well. It’s a Belgium production and definitely has a Euro Horror look and feel.

We open with a horror staple young couple, Alison (Maaike Neuville), the pretty clever girl, and Michael (Bart Hollanders), the nerdy guy, driving to a very sketchy Eastern European clinic for Alison to get a breast reduction surgery. Michael isn’t really sure he is ready to say goodbye to her impressive figure but is sincerely supportive of her decision.

On a side note here, the way the movie shows us why Alison has decided to get the surgery is incredibly on point.

As their car waits at a stop sign, a busload of young males pulls up next to it. They ogle Alison’s breasts and make crude sexual motions to her. This is something that all women will relate to, and it’s a horrific indictment of our culture and society as a whole where a woman is pressured to get a fucking surgical procedure to stop unwanted attention from random males. We need to do better, guys.

Tagging along with the couple is Alison’s mum, Sylvia (Annick Christiaens). The relationship between the couple is very sweet; they refer to each other as Pookie Bear, which I absolutely adore. Sylvia is less sure of Michael than her daughter, but it feels like such a familiar, real group dynamic. I instantly liked the trio.

They pull up to the very institutional-looking Klinika Krawczyk and are greeted by Janja (Clara Cleymans), the clinic manager. We also get our first look at the antihero, the bleached blond, handsome, creepy guy, Daniel (Benjamin Ramon).

Alison is examined by Dr. K (Eric Gordon), although examined may well be stretching it. It’s probably more accurate to say she is groped by him, and he immediately makes the supposition that she is there for a breast enlargement rather than the reduction she wants.

While they are waiting for her surgery, Michael becomes concerned about the lack of professionalism at the clinic. Meanwhile, Janja enlists Daniel to take Michael on a tour of the clinic to get him out of the way. Daniel takes the opportunity to take Michael to a sub-level of the facility so he can gain access to a room where some drugs are kept. Telling Michael to wait outside, Daniel enters the room and scores some pills. While he’s waiting, Michael hears some strange noises from a nearby room and goes to investigate.

He is greeted by a young topless woman restrained to a bed with a mask covering the lower half of her face. Michael, thinking he is helping, removes the mask and reveals she’s a Zombie (sporting some pretty stellar makeup effects). She attempts to bite him. He backs off, and Daniel arrives and ushers Michael out. The girl starts to chew through the restraints and eventually escapes.

From here on in, it’s a nonstop gorefest, with a healthy dose of slapstick comedy added to the mayhem.

If subtlety is your thing, this film might not be for you.

For example, we get to see a tv star seeking penis enlargement surgery first burn his dick with boiling water. It is then set on fire and frozen from a CO2 fire extinguisher before the head finally falls up — all in loving close up!

The characters are all exactly what you’d expect.

Michael is suitably nerdy and tries hard to be heroic. Daniel is creepiness personified. Alison is resourceful and brave. Janja and Dr. K are conniving and Machiavellian. But you get the impression that this predictable characterization is very intentional from the director, and it sets up the ending gloriously.

There is plenty of gratuitous semi-nudity. The gore is over-the-top and relentless, and the SFX makeup is pretty damn good.

All in all, it’s a really, really fun ride. 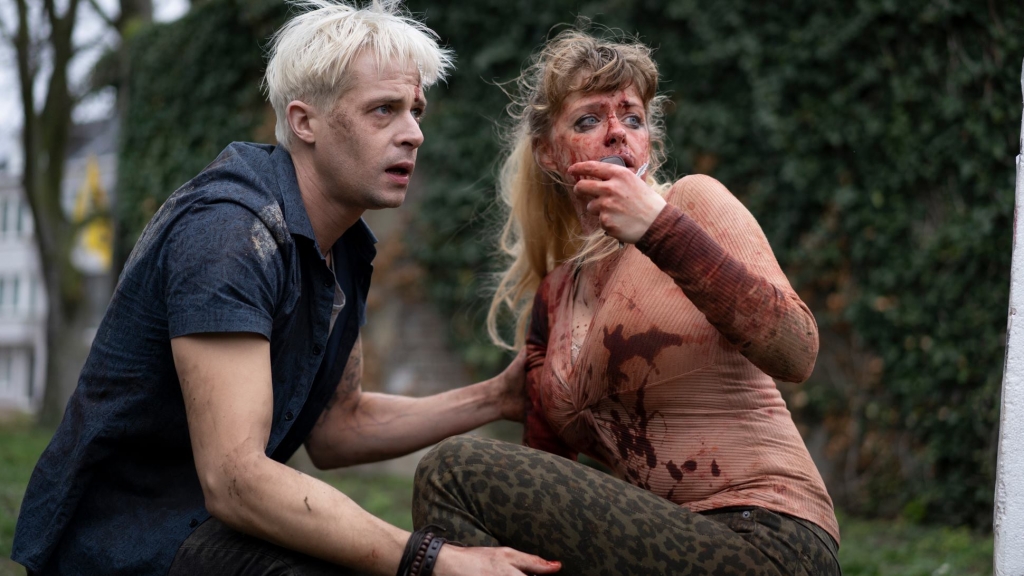 As an added bonus, we get a very euro horror bleak ending, which is so shocking because of the juxtaposition with the comedy that has been rampant through the film up until this point. And when I say bleak, I mean, really, really bleak.

Subtitle phobic people may be put off by the start of the film, but please stick with it. The majority of the movie plays out in English.

Generally, when a movie mixes styles in this way, it either works really well or falls flat on its face. Luckily, YUMMY really nails the recipe — and the result is demented and delicious.

Yummy is currently streaming on Shudder.

MORBID MINI
Yummy delivers on all fronts. It’ll make you laugh, gross you out, and the ending will come as a stiff jolt to the senses. If you grew up watching 80s horror, especially 80s zombie horror, you’ll get a nice nostalgia kick, too. It’s relentlessly fun and fast-paced, wickedly funny at times, and a visual treat. Definitely recommended, Yummy is a damn delight.