Shudder Sunday: Tigers Are Not Afraid 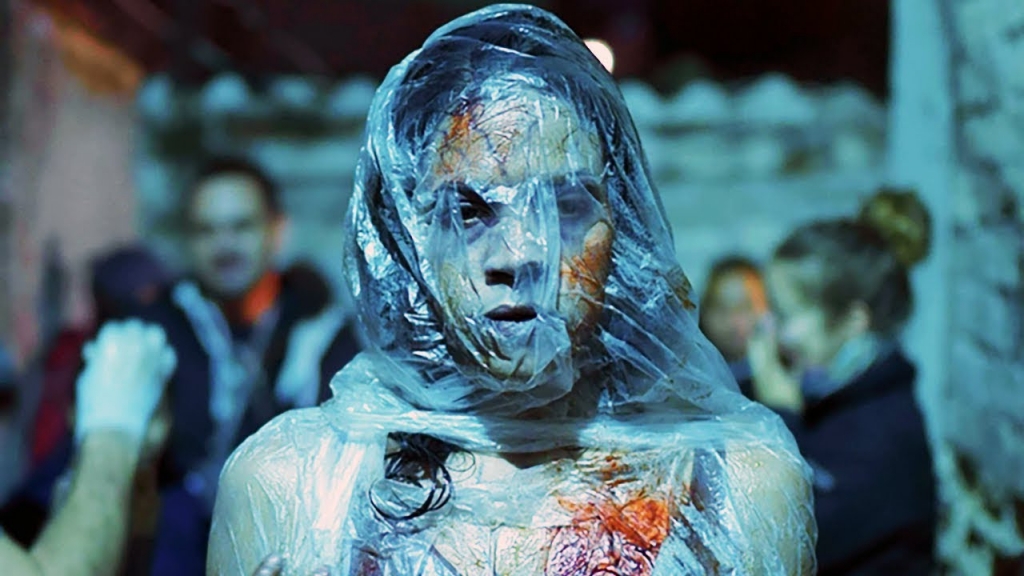 Tigers Are Not Afraid is a Mexican fairy tale that begins with an American Once Upon A Time – a school shooting. Not that it’s an exclusively red, white, and blue problem. By CNN’s count, Mexico has seen the second-highest number of school shootings in the world, with eight tragedies since 2009. The U-S of A just barely edges it out for first place with 288 school shootings over the same period.

It says entirely too much about my own numbed psychology, if not that of the country as a whole, that it wasn’t the sight of kids cowering on the floor or the sound of muffled gunfire from down the hall that shook me. It was the subtitles. It all seemed normal enough, but I didn’t expect to hear it in Spanish.

“It’s kind of terrible that when I wrote the script about these children left on their own in Mexico, it was necessary to add on the fact that we have an actual war going on.”

That’s how writer-director Issa López explained the opening text of Tigers in a talk with io9.

It lays out, in silence, the toll of Mexico’s ongoing drug war. 160,000 murdered. 53,000 missing. Only ghost towns left to remember them. But then the last line, the knot in the stomach — “There are no numbers for the children.”

It’s a quirk of the subtitle, where it splits before the rest of the sentence, but the simplicity is enough to suck the air out of your lungs. What about the children?

Like all fairy tales, there’s power in its universality.

The villains and the heroes are familiar, even if their forms aren’t. Not a dragon, but a cartel. Not a knight, but a spray-painted tiger. But there’s a bleeding-edge timeliness to Tigers Are Not Afraid that makes it as essential as it is disturbing.

The kids left behind have two options – the doomed Lost Boys existence so vividly captured in the movie or b-roll on MSNBC, behind chicken-wire on bare concrete in the Land of the Free. That unmentioned alternative, at least to an American witness to its already in-progress numbing, hangs like a noose over even the bleakest moments of the film.

In that same interview, López admits it was a screw she very consciously turned.

“This is not a mean invasion to take over America, this is a matter of survival.”

You come to love each of the three-foot-and-under band.

They’ve cobbled together some semblance of childhood in the ashes of everything they’ve ever known but grown up more than any kid should have to. When the hot-headed leader, Shine, played by a great beyond his years Juan Ramon López, steals a tricked-out handgun from a drunken cartel killer, he has all the time in the world to pull the trigger. He aims it at the back of the killer’s oblivious head. A head responsible for orphaning entire cities.

It’s part revenge, part survival. An easy enough moral bargain for desperate people in a desperate place. But when the one holding the gun is all of six, barely old enough to understand the permanence of death if it hadn’t made itself violently known, the trigger is a hundred pounds heavier.

There’s more to Tigers Are Not Afraid than its unavoidable talking points.

But it’s hard to watch it without thinking of these kids behind chicken wire, on bare concrete.

Our hearts break for the ones already in the news packages, but in the cruelty Olympics of 2019, they have no chance to tell their story, to put voices and names to crying faces. No single piece of art can turn that tide and it’d only be a disservice to saddle any work with that responsibility. But the adolescent scavengers of Tigers Are Not Afraid certainly put personalities and senses of humor and innocence and life-giving stuffed animals to the thousands of kids that the president himself writes off, on the record and in public, as barely human.

More than political, though, Tigers is just that: human. 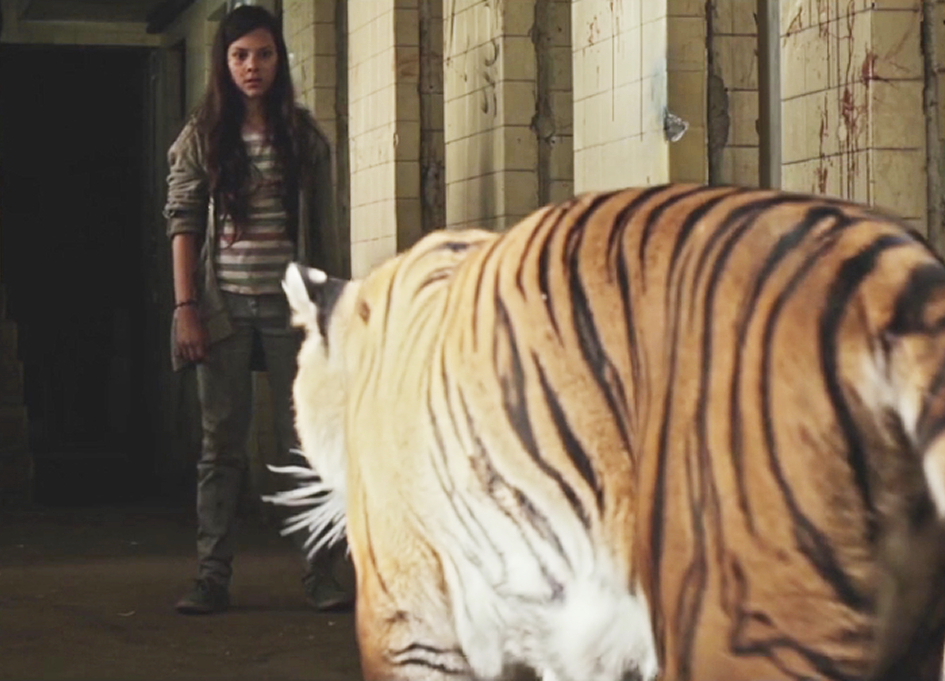 The knee-high kind, specifically, and the view of it all from down there. That vantage point only allows for the harshest contrast, black, white, good, and evil. Bad guys carry nickel-plated pistols with snakes carved into the grips. When Shine turns it on its rightful owner, he can’t pull the trigger. Why not? The conflict is clear as the shake in his wrist and he warns the new girl in no uncertain terms of their fate if caught, but he can’t walk the walk.

He’s still just a child. Murder doesn’t work. The graffiti tiger they idolize might hunt and feed and eat smaller things, but it just doesn’t compute.

Estrella, played just right by Paola Lara in a role that could’ve brought the whole thing crashing down with one false move, was writing her own fairy tale when the gunshots sent everyone under their desks. She’s surrounded by death. It seems to be closing in. But her first glimpse of it is a body on the sidewalk hastily covered by a rug.

Across the street, her classmates celebrate their unexpected day off by limboing back and forth under a ripped stretch of police tape. When the thin trail of blood follows her home and traces the walls until she realizes her mother has been abducted, she doesn’t scream. Doesn’t run. It’s no more shocking than the corpse in the road, or the bullets in homeroom. 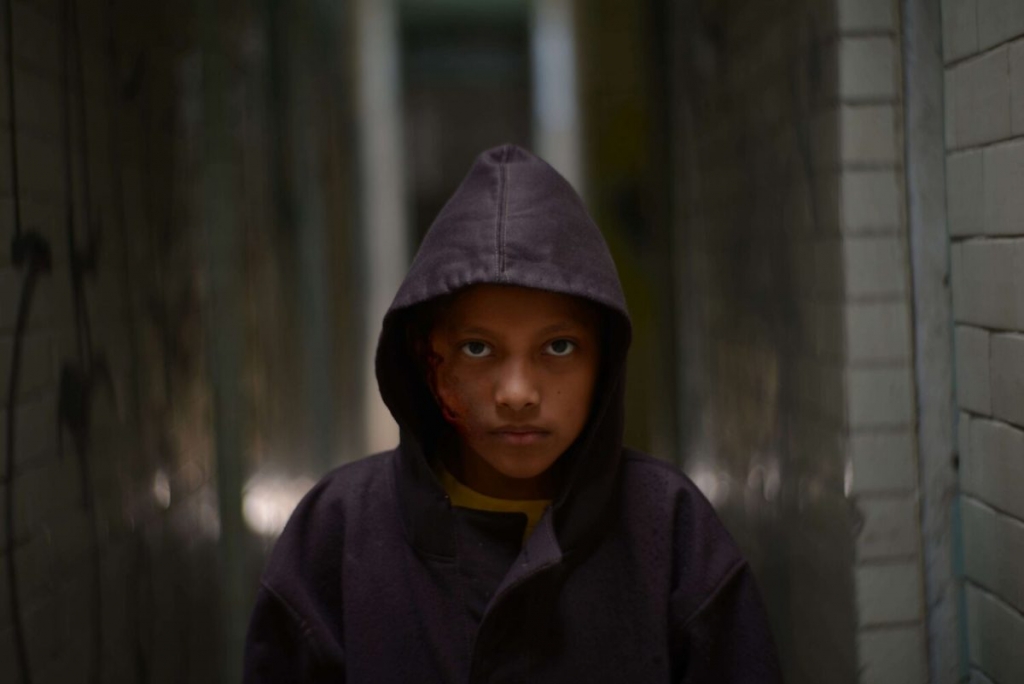 The fantasy and horror of Tigers Are Not Afraid are treated as matter-of-factly as everything else to a five-year-old eye.

When the ghosts start showing up, anonymous, gory husks clouded just enough by the cellophane wrapping they were dumped in, Estrella