It’s time for round two of the roguish, cult classic, ‘Slasher House’ franchise 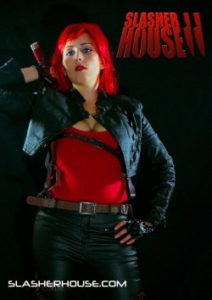 The bell dings and the combatants take their corners in this bash ’em in the face, off with your head series. The role of Red is once again upheaved from the unheralded depths of darkness to crusade against a campaign of evil in a personal quest for justice.

As few might have guessed, this is not a sequel but rather a prequel to Slasher House (read our review here); shedding some much anticipated light on Red’s back story and the culmination of how she landed in the Slasher House to begin with. Francesca Louise White takes over the role of Red, seizing the helm from the previous film’s Eleanor James who was cast as the heroin the first time around. There is a definite noticeable difference between the swagger of the two actress’ role portrayals. Francesca White’s Red is more of a battle-hardened vigilante assassin, as opposed to Eleanor James’s memory-faded, amnesia -plagued femme fatale.

I for one despise when a film series switches the actor who embodies the main lead, as I believe you never really get the same take, and the characters ultimately give completely different feels accordingly. Surprisingly, this was not an issue I had with this film. At times, you forgot the switch almost entirely, and White felt even more zoned in and correct for the given role.

I felt White did a fantastic job on her conveyance of the dialogue, although to me, the dialogue seemed out of sorts in particular areas. For the most part, the dialogue was relatable. However, during certain scenes the lines sounded misplaced and a bit pushed.

Right out of the gate, this film picks up and doesn’t slow down.

Slasher House 2 begins with Red, a.k.a. Felissa Harley, tracking down and disposing of a notorious serial killer dubbed the Stripper Ripper. Wearing a giant panda mask, the Stripper Ripper a.k.a. Jacob Jakushi, comes equipped with butcher’s knife and a lust for blood, played by talented new comer David Hon Ma Chu. This character appears to be a delightful modernized version Jack the Ripper which I found to be indelibly elegant.

Also joining Red, is Luna Wolf who plays Amber, the down on her luck stripper whose strip club/residence was burnt to a crisp by The Red Angel in an attempt to cover up and discard of the Stripper Ripper who was rightfully exterminated. While I enjoyed the character of Amber, sadly I found the character to be slightly irritating and at times, nonessential to the film. However, I enjoyed the blonde wig used for the role of Amber, a Siamese twin to White’s red wig.

Sophie Portman accompanies the cast, anteing up an impressive performance as Red’s tech savvy sidekick Luse Gui, who guides Red through a madhouse of diabolical and hellishly wicked madmen. One character who made the cut yet again, was Wellington Cosgrove as Charlie Corbin, a.k.a. the Brain Surgeon.

Seeking retribution, Red is on the hunt, searching out killer after killer in an attempt to clean up the filth ridden streets. All the while someone is accumulating a mass amount of serial killers for reasons unknown. Along the way, she battles new enemies such as Gravestone, once Steven Grey who was brutally murdered, where upon he shed himself of his vessel, taking on the form of a serial killing skeleton. The effects were quite comical despite the clever and violent back story of the character.

Another victim of the micro-budget was the tunnel digging, drill handed, part cyborg serial killer character named Moleman. His character has a giant drill for a hand, but up close, it’s obvious he suffered the effects of not enough money. The drill barely turns and moves, and it appears to be covered in aluminum foil or something along those lines. Once again, I felt that even with these defects, it only strengthened the film. It seemed clear that, if exposed to the kind of budget I’m sure the filmmakers would have liked to have had, the special effects wouldn’t have been an issue. A bigger budget would have also given Director Dixon more freedom to concentrate his abilities elsewhere.

The film, to me, did feel a tad unfinished, seeming like MJ Dixon took on more water than his budget allowed for. The cheesy, low budget special effects however, in my opinion, only added to the badassness of the film.

The lightening and use of colors is very reminiscent of Dario Argento’s Suspiria, softly vigorous and eerily atmospheric, emitting a vividly lucid, luminous vibe. The sound and music were remarkably outstanding, reminding me of and similarly resembling the score from John Carpenter’s Assault on Precinct 13.

The thing I found the most appealing about this film was the attention to detail in the costume and makeup categories. The costumes and masks are some of the best I’ve seen in quite some time, a complete 180 from the original film. The mask used for the main villain was darkly enchanting and captivating.

These are old school films along the likes of the 80s and 90s slasher craze, shot in recent times. Had this film been released a few decades back, there is no doubt in my mind that Dixon’s name would be in lights with the best of them.

This film is splatterific, intrepid and dauntless. A vast world full maniacs and murderers. Dimension splitting fun. Terrific and terrifying. A joyful escape into madness.

MJ Dixon and Mycho entertainment are pumping out extraordinarily exceptional, high quality films on a rice budget. Right now, Dixon is creating films on par with classics such as Friday the 13th and Halloween, on an even tinier allowance. When fully backed and finally given a decent budget, we will see a forthright emergence of Mycho Entertainment and MJ Dixon, whose name will eventually become synonymous with some of the genre’s most iconic directors.

In conclusion, this film was gloriously crafted and should not be missed.

I am beyond excited for this franchise and can’t wait for the next installment of the Slasher House series, as I know it will only get better with each film. MJ Dixon has yet again raised the bar for micro-budget indie horror. So I urge you to pick up Slasher House 2, or anything from Mycho Entertainment, for they are not a beast to be taken lightly.