FOUR KILLERS. ONE GIRL. TOO GOOD TO PASS UP. 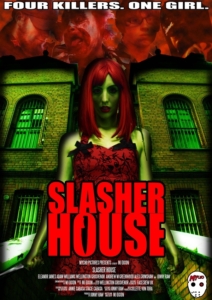 A night in a madhouse, insane serial killers and a hot female lead kick off this splatter fest as the first installment in the Mycho universe finds main character Red (Eleanor James), awakening to find herself trapped in an old abandoned asylum with the world’s most infamous killers. She has no clue how she ended up in the predicament, as the sadistic killers are released one by one from their cells to prey upon each other in a murderous game of cat and mouse.

I admit I’m tardy in discovering this gem. But now that I have, I’m hooked. With such a low budget, the film ultimately lacks in several areas such as lighting, dialogue, costumes and sound. However as a whole, this film is surprisingly slasher-ific. I loved the characters, especially Nathan and Cleaver, who now have their own spin off films, “Hollower” and “Cleaver: The Killer Clown”.

What really caught my eye in this film was the ingenious cinematography, along with the John Carpenter and Quentin Tarantino-esque camera angles. The dialogue sorely lacked, as there wasn’t much to tell with this kind of film, leaving a lot of situations unanswered. The costumes were very miniscule, yet very appealing and fitting at the same time — although I did feel that not a lot of thought was put into those.

The gore was phenomenal for a film with such a low budget, giving it a Real Slasher feel.

The lighting I feel could have been better, although it looks to be a trademark of the director. The whole film was shot in a green glow, showcasing red colors, causing the red to stand out and pop against the green. I understand that, with such a small budget, lighting was probably not one of the major focuses of the film. However, I would have liked to see the actors in more natural lighting and feel it would have been much more hard hitting seeing them portrayed in that way, as opposed to being filmed as green monsters. 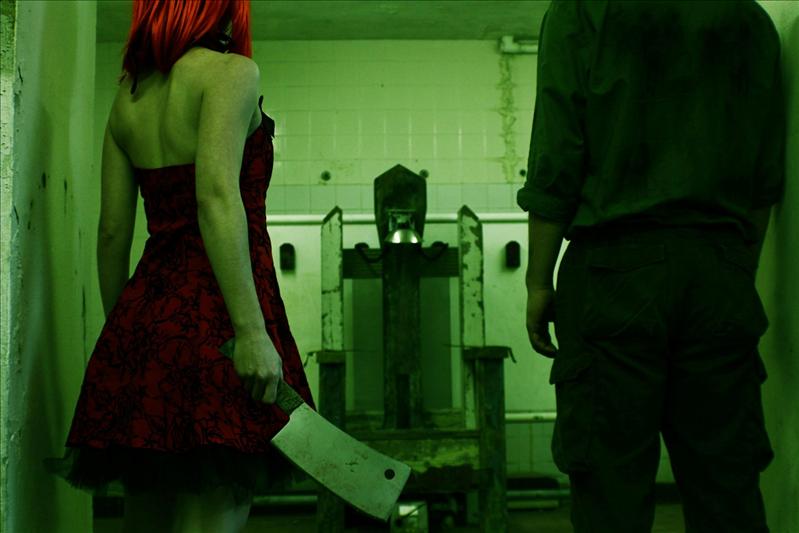 The sound was a tad of an annoyance as well, certain scenes were extremely loud while others were too soft, and there was a bit of an echo having been filmed in the Douglas Prison in the Isle of Man. On the other hand, the sound effects were on par, and the music fit the film really well. The cast was terrific, even though I’ve never heard of or seen any of the actors previously. Every actor was believable in their own portrayal of their casted character. However, there was supposed to be some romance between the two main characters that I don’t think came across like it was meant to.

Overall, this film delivers on a level most B-films have a hard time trying to retain. There wasn’t much to the story line, and it could have been explained further. But, for the type of film it is, it did a superb job and held my attention the entire time.

This is the talented UK director MJ Dixon’s first major mainstream horror film, released in 2012 under the company Mycho Entertainment. This is A-film directing on a B-film budget. MJ Dixon shows us in this film that he has superior directing skills, although his involvement extends beyond just the director’s chair. He produces, writes, edits and does the cinematography (among wearing other hats) for this wicked smash mouth, grab you by the throat and never let go slasher film.

Being a horror film buff since I can remember, it’s been quite a while since I’ve came across a director with the amount of potential that MJ Dixon exudes. I, for one, am ecstatic to see what else his twisted mind creates. In fact, two spin off films, Hollower and Cleaver: Rise of the Killer Clown have just been released for sale on DVD and VOD. His second film in the Mycho Universe, The Legacy of Thorn, was released in 2014 — where we find out what has happened to the maniacal killer Thorn since the end of the original Slasher House.

Slasher House 2, the follow-up sequel, has recently finished filming and wrapped… leaving us biting our fingernails in anticipation of finding out what has happened to the characters since the end of the first film.

The horror community needs to take heed of MJ Dixon’s fertile films. He is a classy, up-and-coming figure with loads of potential. He needs instant recognition within the horror industry. This film gladly wreaks of horrific fumes, giving a genuine late eighties/early nineties slasher feel, while still being innovative in its camera angles and directing.

If you’re looking for something new to wet your palate, and are in need of new horror films and/or slasher films to check out and get excited about, don’t sleep on this one — or anything coming out of Mycho Entertainment for that matter. This is just the beginning from a company that I feel will be with us for a very long time.

So go grab something from Mycho Entertainment, sit back, indulge, and have a bloody good time!