A sexy, nostalgic romp for children of the 80s, “Party Night” looks great on Blu-ray, even if both the film and the release are light on substance. 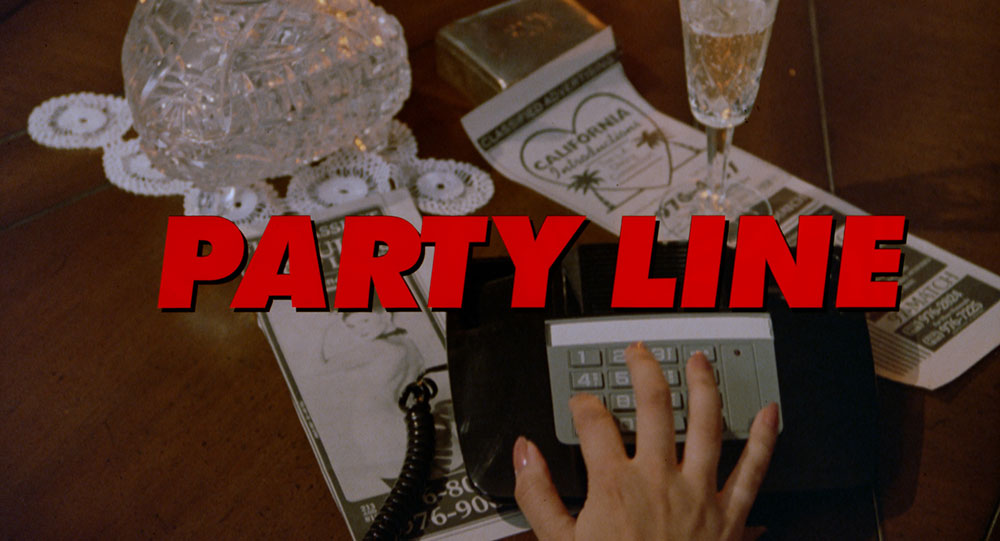 Vinegar Syndrome brings me back to my later teen years with the 1988 movie PARTY LINE, directed by William Webb and starring 1980s icons Leif Garrett, Richard Hatch, and Richard Roundtree, best known for his work in SHAFT, and to horror fans for his role in FROM DUSK TILL DAWN.

Seth (Leif Garrett) and Angelina (Greta Blackburn) are brother and sister in this nod to Brian DePalma’s DRESSED TO KILL. Seth and Angelina cruise telephone party lines, which were the 1980s version of online chat rooms, to pick up men or women for a sexual rendezvous. The resulting ménage-a-trois ends with a razor blade slash across the victim’s throat from Seth.

Detective Dan (Richard Hatch) is assigned to the case by the assistant DA, Stacy (Shawn Weatherly), and they both begin to investigate the string of murders. Stacy is straight laced and by-the-book, and Dan is an impulsive, reactive cop in the vein of Clint Eastwood’s Dirty Harry. 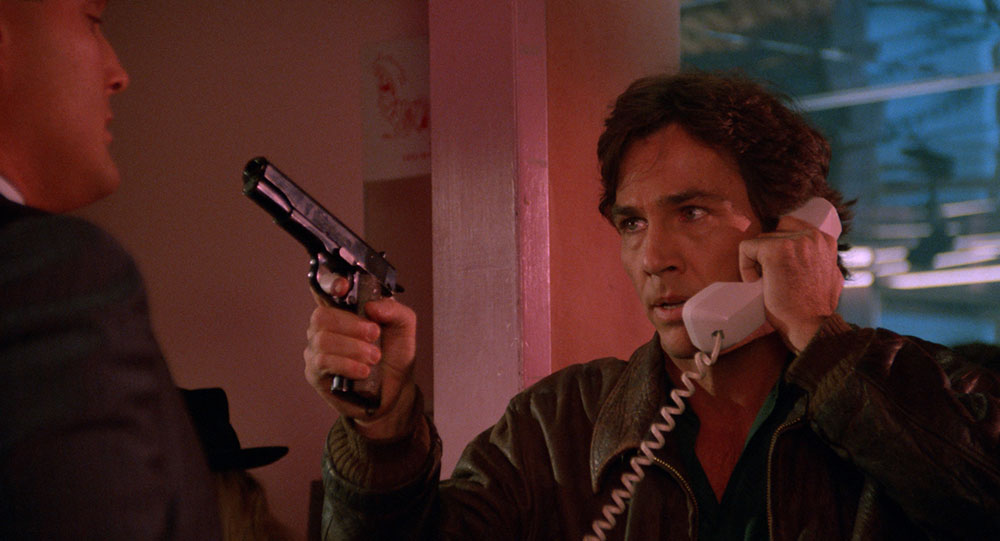 Dan and Stacy’s investigation brings them closer to finding out who the killer is, and the increased scrutiny on the murders brings out a more sadistic side to Seth. The question in PARTY LINE is whether Dan and Stacy can figure out the identity of the killer before Seth kills more people or even someone close to them.

PARTY LINE is based on the late-80s fad of call-in 1-900 party line phone numbers. For a price, a caller could be connected to people locally or around the country, usually to try and score a quick hook-up. As a fan of late-night movies and USA’s “Up All Night” with host Rhonda Shear, I got to see plenty of commercials for these party lines.

This movie perfectly captures that decade.

PARTY LINE is certainly a movie that I might have found on Showtime or Cinemax back when I was a teenager. It’s also a movie that might have been shown on USA’s “Up All Night.” It has all the classic elements for a tawdry late night classic: nudity, a sex-filled plot, a crazed killer with sibling and parental issues who likes to dress in his mother’s wedding gown, a gritty cop who follows his own rules, and a young assistant DA who is looking to climb the ladder of departmental success by working hard instead of fighting off the come-ons of her boss, the District Attorney. 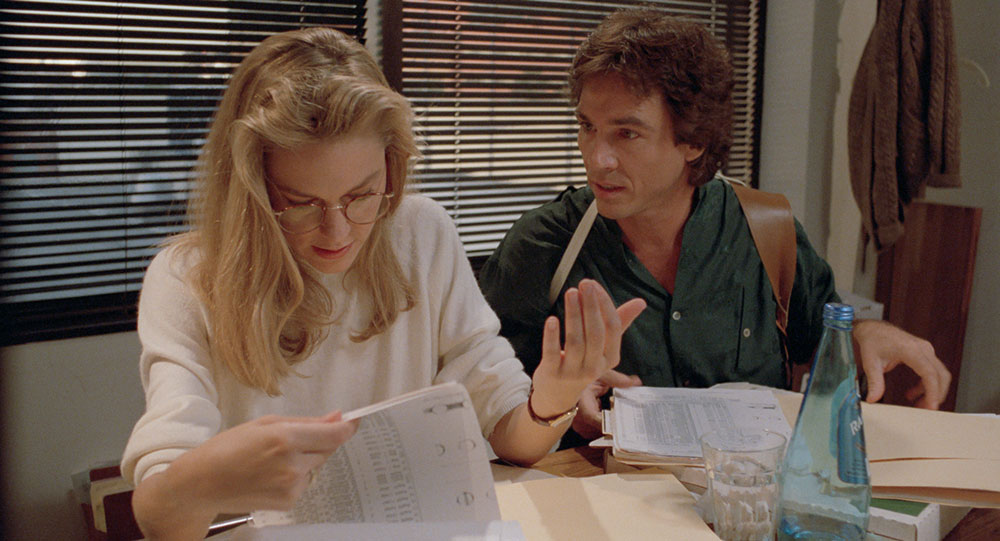 Despite the nudity and sexy situations, PARTY LINE falls a bit flat as a story. The investigation isn’t all that exciting.  The resolution to the investigation involves a subplot with a family man who is trying to bed his daughter’s babysitter, and said babysitter trying to hook up with men on the party line.

Richard Hatch is a favorite of mine due to his work as Apollo on the original “Battlestar Galactica” TV show and his return to the rebooted show as revolutionary leader Tom Zerek. In PARTY LINE, however, he doesn’t come across as a believable hard-nosed cop with an anger issue. Richard Hatch just comes across as too likable and nice a person.

Richard Roundtree has a very limited role as Captain Barnes, the cop who has to deal with Dan’s authority issues. Barnes also pops up from time to time to offer sage advice, take away Dan’s badge, and give Dan his badge back. It’s not much of a meaty role for an iconic cult actor like Roundtree. 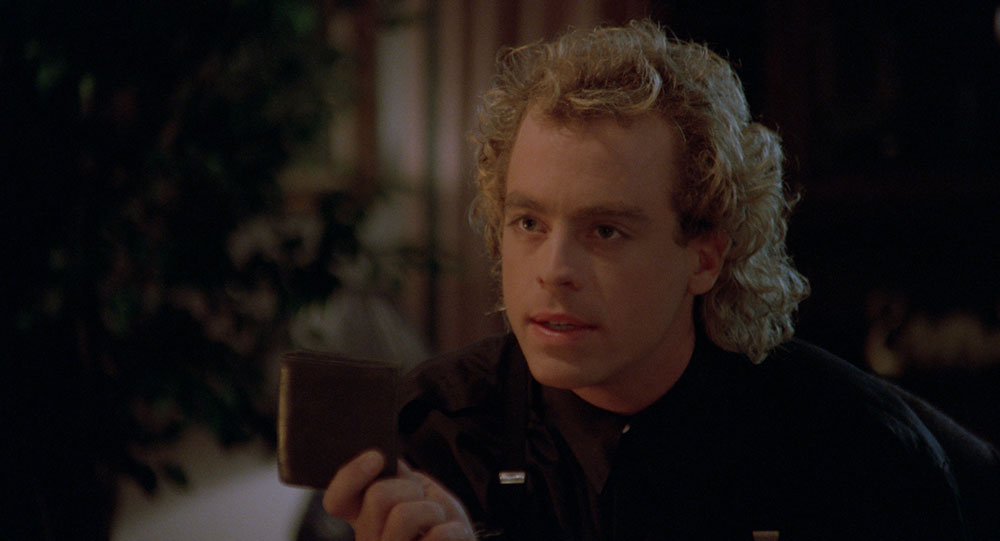 PARTY LINE is a pretty bare-bones release for Vinegar Syndrome.

The film looks great in its 4K restoration.  The picture is crisp and clear, and the colors — especially the blood — pop off the screen.  The interview with screenwriter Richard Brandes isn’t too in-depth as it only lasts about 15 minutes, but Brandes offers some insight on breaking into the movie business and the process of writing PARTY LINE.

While an interesting movie from the late 1980s, PARTY LINE probably isn’t a movie that is a must-have for your Blu-ray library. 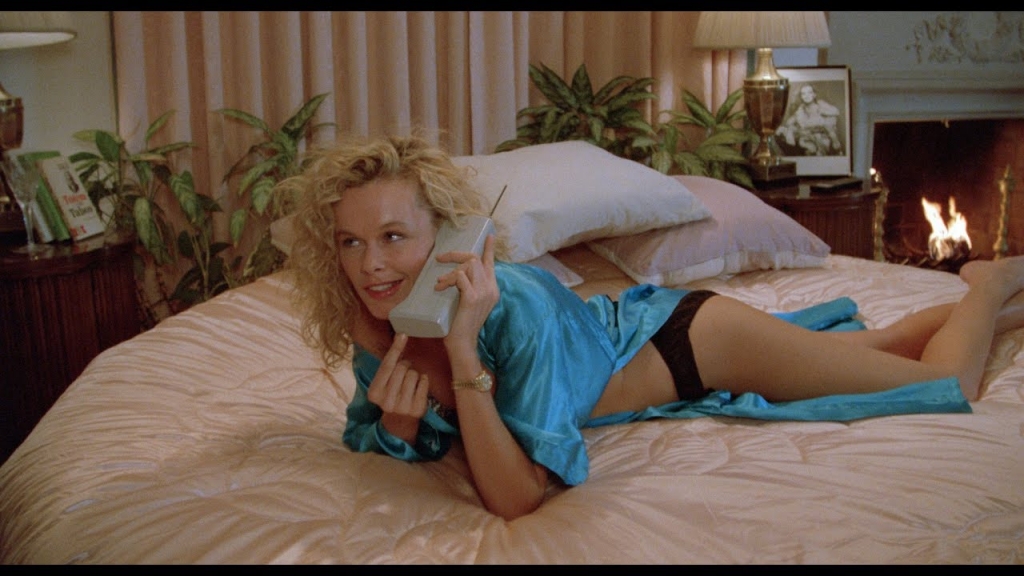 For more information and to purchase PARTY LINE, visit Vinegar Syndrome at www.VinegarSyndrome.com.