John Burr’s “Muse” is a visually stunning, highly original, twisted fairytale about the high price of artistic inspiration and greatness. 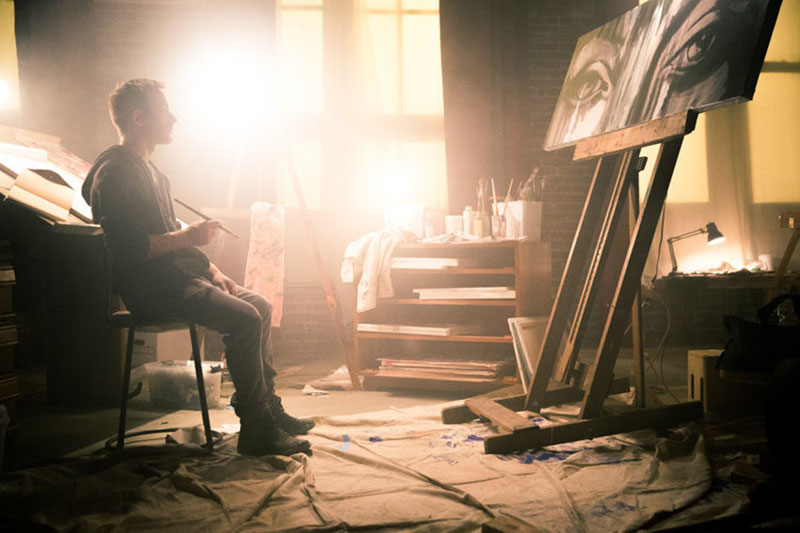 Adam (Riley Egan) is a broke and struggling artist, living alone in the dilapidated lofts of the arts district in downtown LA. Meek and insecure, he dreams of making it as a successful painter, but he can’t find the inspiration he needs to make his work stand out. He’s also prone to dark visions he can’t explain, unconsciously transposing images from his visions on to paper.

When the new thuggish tenant of his building, Hector (Max Decker), takes a liking to Adam, he offers Adam the chance to find the inspiration he’s looking for — a much needed change of scenery that can be found by driving Hector to a place on the outskirts of town, allowing Hector to tend to some shady business dealings. 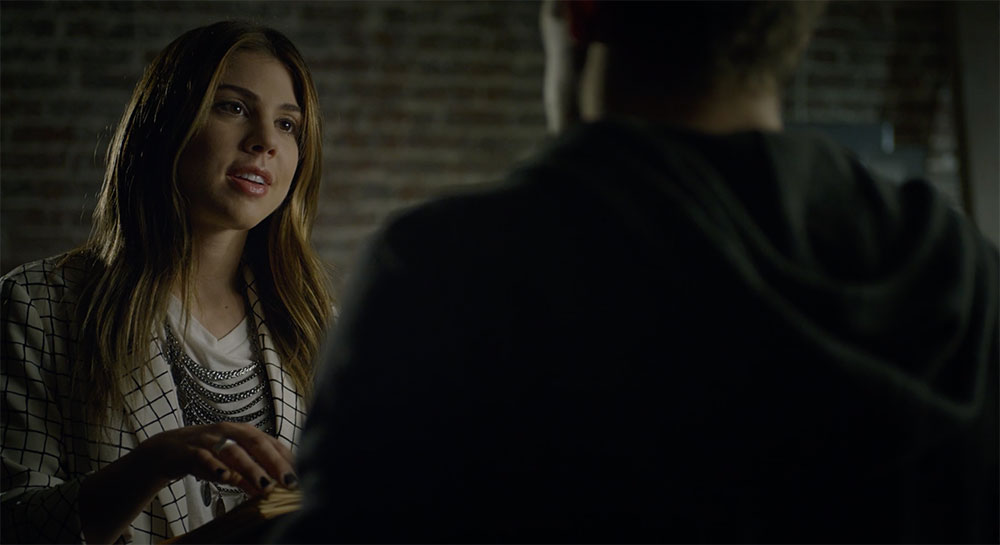 Shortly after, his neighbor and the woman he secretly pines for, Maria (Kate Mansi), invites him to an art exhibit at a local gallery where her cocky and brutish boyfriend Jason (Lou Ferringo Jr.) is showing his work. Jason has everything Adam wants and, in spite of his disagreeable personality, is everything Adam aspires to be. At the exhibit, he also meets gallery owner Valerie (Jennie Fahn). She instantly recognizes a spark in him and encourages him to look for his muse.

Frustrated by his failures as an artist, he accepts Hector’s offer to head out of town to a secluded location in the woods. While driving home, Adam is forced to slam on the brakes to avoid hitting a beautiful young woman (Elle Evans) standing in the middle of the road. But when the two get out to check on her, she has disappeared, only to reappear moments later. A series of disturbing events transpire, and the two men leave the scene in a panic.

Once home, Adam furiously paints like he has never painted before. In a fever sweat of intense inspiration, he paints a picture of the woman from the woods. Then suddenly she is standing before him, flesh and bone — a silent but captivating embodiment of his innermost desires. 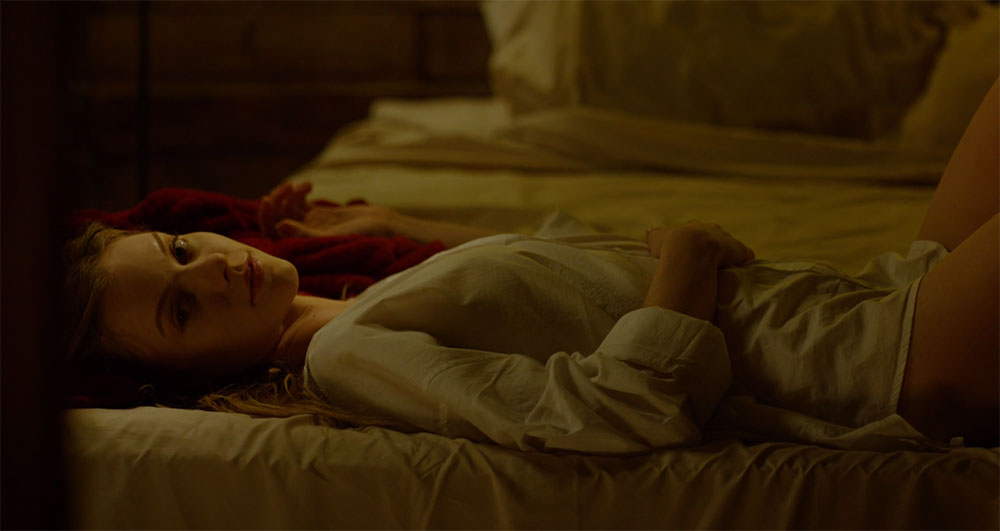 The next day, he returns to see Valerie and show her some of his work. Upon seeing the painting of Adam’s muse, she is instantly drawn to it. She comments how different it is from the rest of his art and encourages him to bring her more work of that caliber.

When Adam returns home, he sees the bloody aftermath of an altercation between Hector and his mystery woman, and he realizes what his beautiful muse is really capable of. Forced to clean up the mess, he’s horrified and sickened. But he’s also aware of the intense pull she has over him. Then his unscrupulous landlord barges in uninvited to discover Hector’s mutilated body, threatening to call the cops. 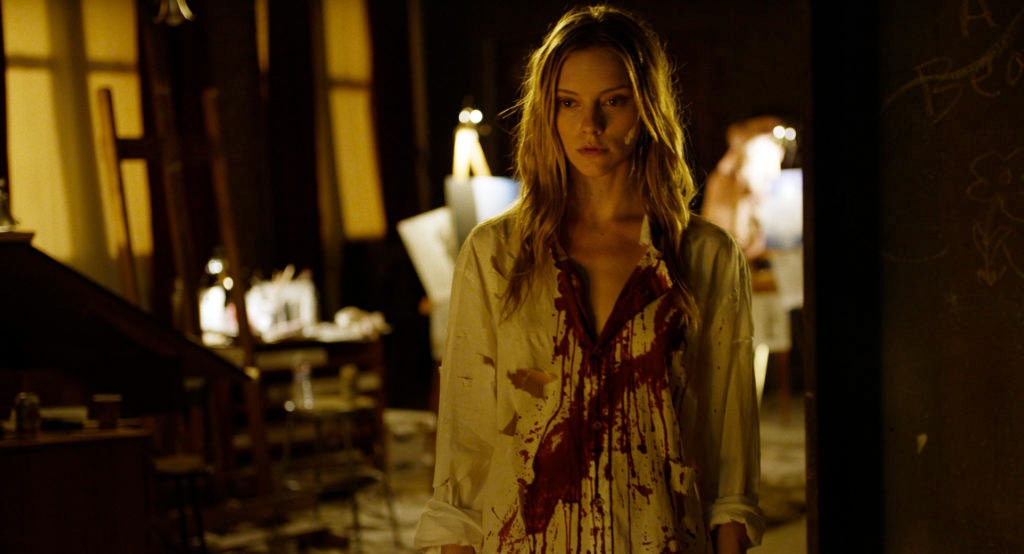 It’s at this point, one of the most viscerally captivating scenes of the film, that Adam is forced to come face to face with the woman’s brutal savagery — and the lengths she’ll go to defend him at all costs. As she stands before him naked, the two of them covered in blood splatter from the dead body in front of them, abhorration turns to arousal — and the woman becomes his lover and protector.

With his muse by his side, Adam’s world begins to change in dramatic ways. He gains self-confidence and a new sense of purpose. He finally begins to earn the respect and adulation he’s desired for so long — even outshining his former rival, Jason. His crush, Maria, also finds herself more and more drawn to him. He’s getting everything he ever wanted, but he’ll soon learn that perfection comes at a price. 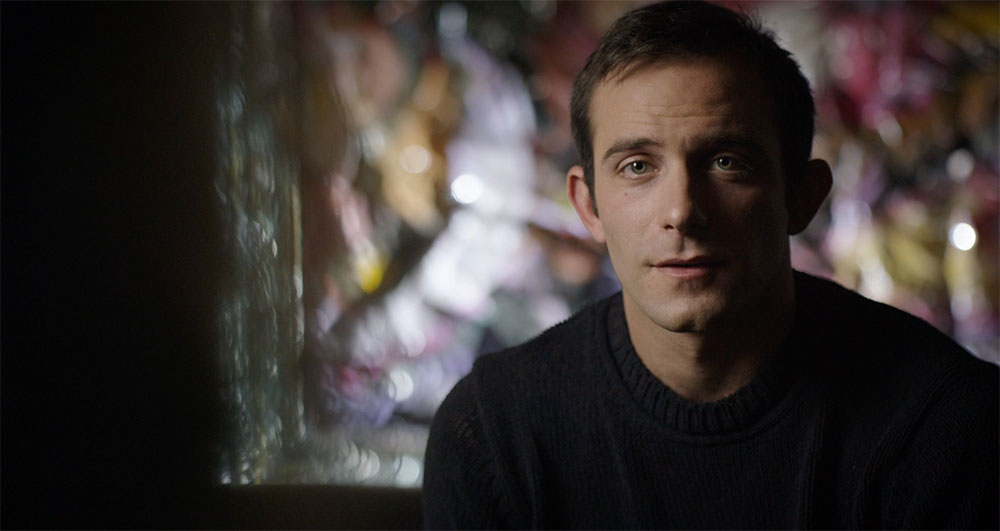 Valerie helps him understand the true nature of his muse, a beautiful but deadly mystical creature of Gaelic legend known as a Leannán Sí. She will love him unconditionally, and she’ll inspire him in ways he never thought possible. But she will also ferociously destroy anything that threatens their relationship. As his feelings for Maria grow stronger and he begins to realize the fragility of the foundation his success has been built on, Adam must choose between his moral compass and his wish fulfillment — between love and artistic passion.

Elle Evans is mesmerizing in a completely dialogue-less performance as the Leannán Sí. 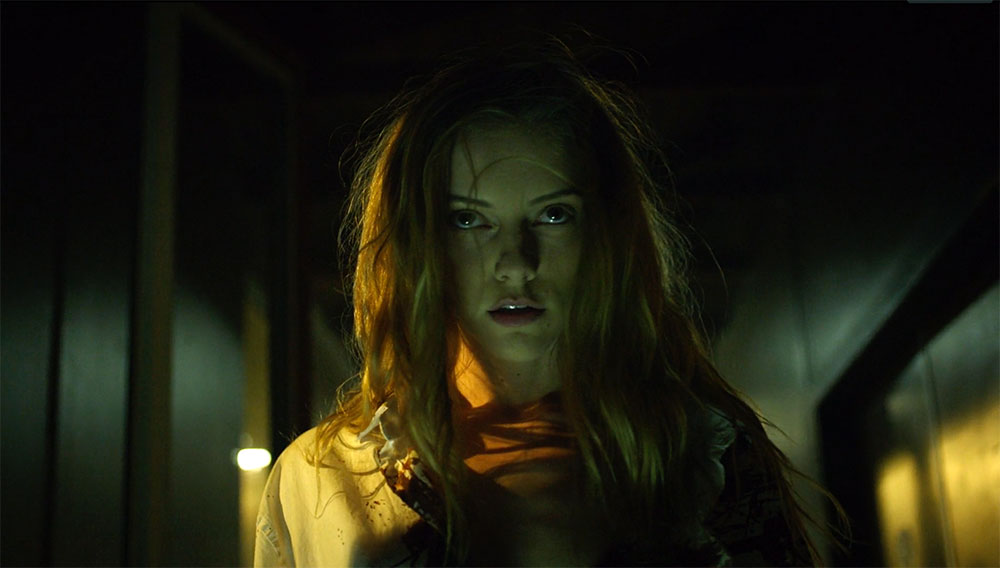 Because she doesn’t utter a word, she has to convey so much in her physicality and with her eyes. She has to be hypnotically alluring one moment and convincingly terrifying the next. She must convey an otherworldly, supernatural quality while retaining a core humanity. The success of the film largely hinges on her performance, and she more than delivers. While much of Elle’s performance requires her to simply stand around looking beautiful, the ending gives her a chance to really flex her acting muscles and show off how much she’s capable of.

MUSE is a visually stunning film, impressively shot entirely in 15 days. While much of it takes place in a single location, in Adam’s art studio, it’s beautifully lit and expertly shot by cinematographer Damian Horan. There’s so much attention to detail infused in every shot, and the picturesque visuals — combined with Alexander Rudd’s haunting and ethereal score — truly helps create an enchanting, dark fairytale atmosphere.

In a story centered around an artist’s journey of self-discovery, the art itself plays a crucial role, essentially becoming another character in the film. And much of the film’s undeniable visual appeal is a result of the paintings created for the film by talented artist Jennifer Lauren Friedman, the real-life muse behind Muse.

The movie has some interesting things to say about the price of obsession and the madness that is so often associated with true genius. It works both as a dark fable about a dangerous supernatural creature and as a study of mental illness driven by compulsion and delusion.

It’s also a wonderfully unique tale, with an original premise involving a weak male character who becomes inspired by a powerful female character. I will say, however, that horror fans looking for something exceptionally scary or gory will no doubt be disappointed with this film. 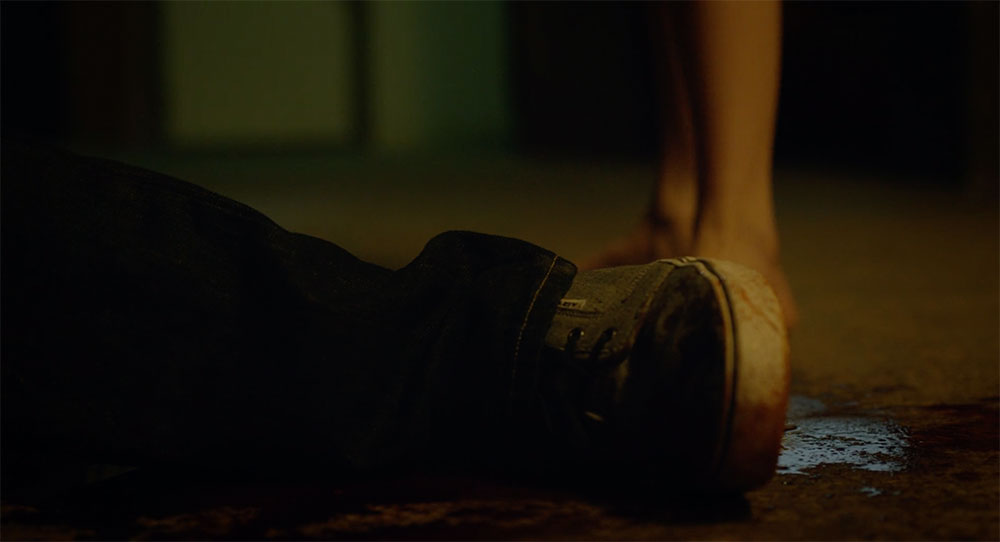 Muse is more of a slow burning, supernatural tale infused with elements of dark fantasy and gothic romance. There are some disturbing scenes to be sure, but the filmmakers approach these scenes with arthouse sensibility, blending violence with sensuality. It’s a film inspired by the works of auteurs like Tim Burton and Guillermo del Toro.

For those who appreciate a more artful interpretation of the genre, I recommend giving this one a watch. It’s not perfect, but it gets a great deal right and deserves recognition for its desire to bring something quite different to the table.

Note: This film should not be confused with another film from Spain of the same name, released in 2017. Be sure to look for the film written and directed by John Burr, released by TriCoast Studios. Amazon Prime members can check out Muse for free here.