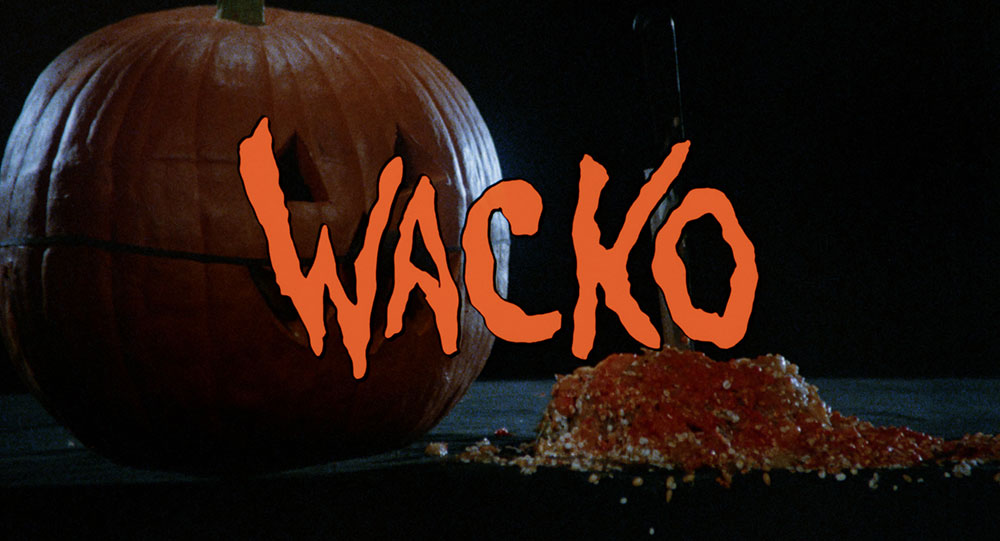 When I received my Blu-ray copy of WACKO, I was excited to see it was another Greydon Clark release, but worried that it was billed a comedy in the same vein as The Wayons Brothers’ SCARY MOVIE. Horror comedies can be hit or miss and tend to be dated due to the joke movie references contained within.

WACKO is about a killer who likes to use lawnmowers as his weapon of choice and wears a pumpkin/jack-o-lantern over his head as his disguise. He is known to the town locals as “The Lawnmower Killer.” Believed to have been captured 13 years before the events in the movie, an inmate breakout at an insane asylum leads the head investigator, Dick Harbringer (Joe Don Baker), to believe The Lawnmower Killer is on the loose again. 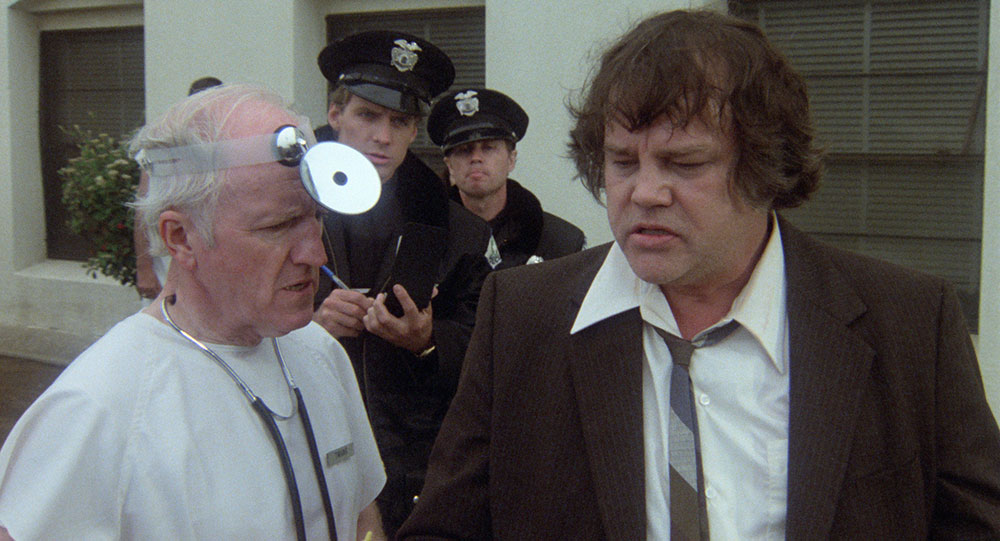 The plot hardly matters in a movie like WACKO. What matters are the jokes, and they are plentiful and come at you at a machine gun pace.

Like AIRPLANE!, the movie that inspired Clark, WACKO is filled with slapstick, irreverent, and multi-level humor. It seems that Clark and writers Dana Olsen, Michael Spound, M. James Kouf Jr., and David Greenwalt (yes, the David Greenwalt from Buffy the Vampire Slayer and Angel) take a throw everything at the wall and see what sticks approach to the jokes. The humor is very broad, and there is something for everyone who is a comedy fan. 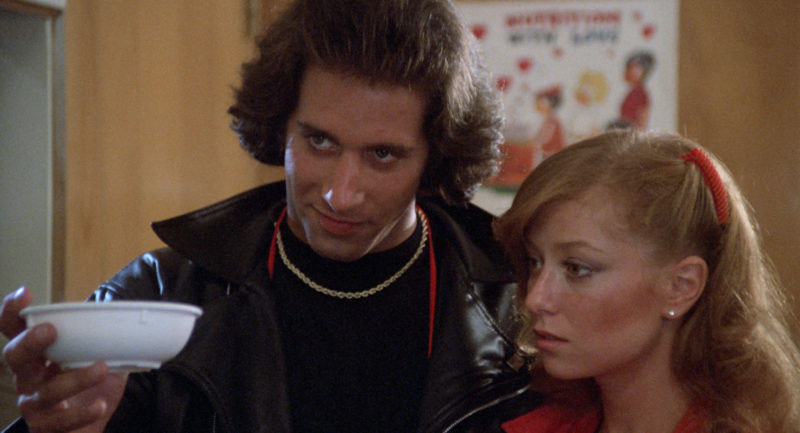 WACKO has an all-star cast that includes Joe Don Baker, who is famous for his tough-guy action roles in movies like WALKING TALL. Joe Don is also a frequent target of the Mystery Science Theater 3000 crew’s famous riffing. Along with Joe Don, the cast includes legendary actor George Kennedy, Stella Stevens, Julie Duffy, E.G. Daily, and in his movie debut, the notorious comedian Andrew Dice Clay.

The special features are slim, but once again, Greydon Clark delivers on his commentary track. Telling stories about his inspiration for making WACKO, casting, directing George Kennedy, working with Andrew (not yet Dice) Clay, and trouble with finding distribution, Clark is a pleasure to listen to. Like UNINVITED, the commentary track is worth the price of the Blu-ray. 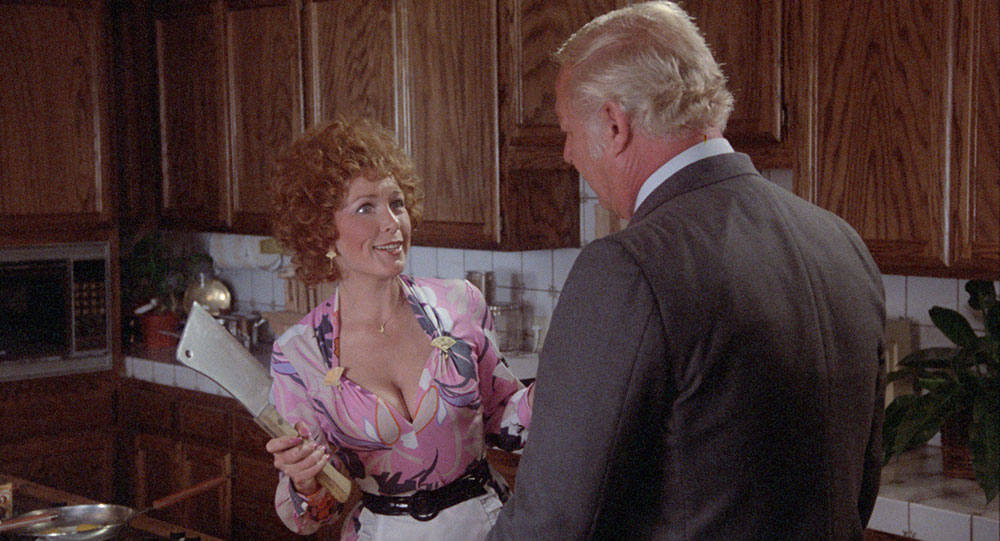 The interview with cinematographer Nicolas von Sternberg runs about 10 minutes. The interview is pleasant, and von Sternberg mostly discusses some of the difficulties in filming WACKO and how he overcame issues with lighting. He also discusses working with George Kennedy and filming around his various lower body injuries which nearly hobbled him.

The outtakes are interesting and funny due to the physical humor in the scenes. But be warned that there is no audio for these outtakes.

WACKO is a solid comedy. There are a few laugh-out-loud moments, and as a whole, it will earn a chuckle from an appreciative audience. WACKO aims to be an Abrahams and Zucker Brothers movie, but it falls short of the comedic genius of AIRPLANE! and NAKED GUN. 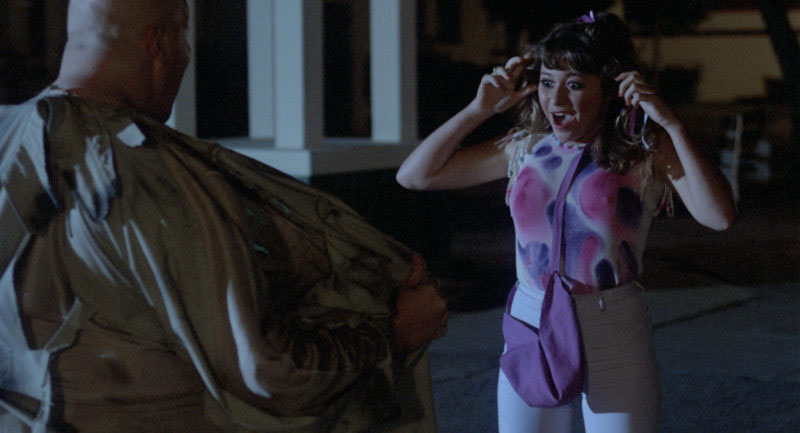 Thanks to Vinegar Syndrome, I have become a big fan of Greydon Clark, and I hope more releases of his movies are on the horizon. 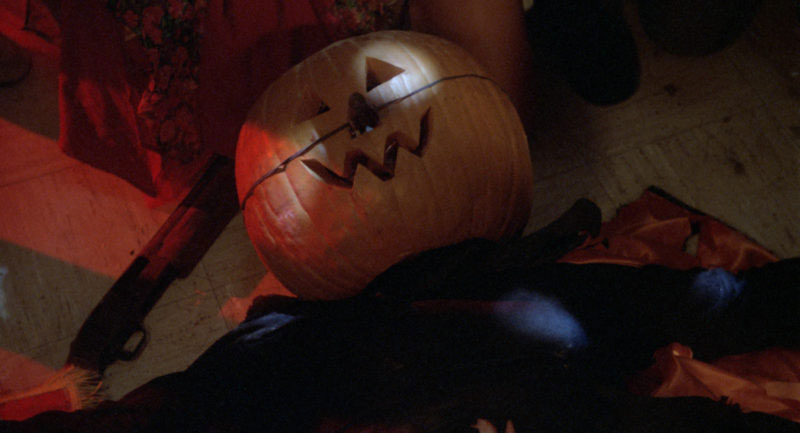 For more information and to purchase WACKO, visit Vinegar Syndrome at www.VinegarSyndrome.com.