Polly McIntosh’s directorial debut “Darlin’” is chock full of youth angst, ideas, and blood — and it’s a very satisfying sequel to “The Woman”. 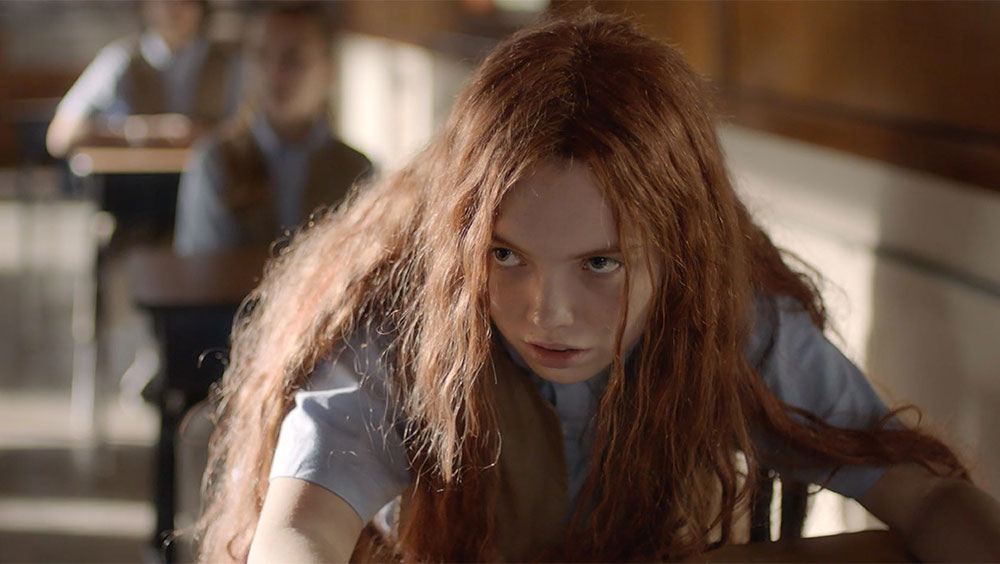 Eyes awash in tears of catharsis and satisfaction, I decided during the end credits of Darlin’ that it is my favorite movie of the year so far.

Beyond being a sequel to The Offspring, and later The Woman, Darlin’ sinks its cannibal incisors into some very heavy issues that I feel quite passionately about. For me, the most compelling ones are the invasive manipulation of someone’s true nature, and the greed and destructive ways of the Catholic church. Making this film even more relevant and important is the fact that I have seen other reviews that covered completely different themes in the film.

This is a pure cinematic gift that can both enrich and entertain.

The little girl the woman takes at the end of The Woman is being raised like a wild animal. As she reaches her middle teen years, she begins to feel the desire for boys, which is a hunger the woman encourages. But not in the way you might think. The little girl winds up in the care of a hospital after being hit by an ambulance. While her behavior instantly terrifies everyone, a brave and cuddly orderly (played with tranquility and good nature by Cooper Andrews) attempts to make friends with her.

After she mends and settles into less violent behavior, she is transferred to a Catholic school for girls. Seeing all the glaring teens, stern elderly nuns, and suspiciously welcoming priest, I thought to myself, “Oh boy, this one is about to take off into the stratosphere.”

A young nun (played by Nora-Jane Noone), and former drug addict saved from the streets by the headmaster of the school, takes a liking to the feral girl and attempts to teach her how to speak. The headmaster, a bishop, sees financial potential in Darlin’ and attempts to catch her violent temper on film. He thinks if he documented a process of breakthrough reconditioning, church donors would be impressed and donate more money.

As the film progresses, the main characters encounter both tragedies and triumphs, and we experience some deliciously gory kills and jarring plot developments.

The characters in this film are determined to “change” Darlin’ and mold her behavior to fit the way they want her to be. This is a direct, heinous attack on instinctual human freedom.  The way the Catholic church deals with Darlin’ is disgusting. It filled me to overflowing with rage. They think that they have the right and responsibility to civilize her, and to fix her. But she isn’t broken. Teaching her how to communicate is one thing, but forcefeeding her the oppressive lava of guilt that is Catholicism is a violation of her right to exist and be who she wants to be.

The Woman (played with intimidating ferocity by Pollyanna McIntosh) can even be assigned some of the blame for this. Because when she kidnapped Darlin’, she too began to shape her behavior to suit her own needs. It was just for results different from the ones the bishop and nuns wanted. Imagine the confusion that must have pierced Darlin’ to her very core, having herself taken apart and reconstructed twice.

There is an element of sexual abuse that is unavoidable. Besides that, the nuns are creaking old crones and sniveling wet nurses for the second coming of Christ. I was rooting for Darlin’s aggressive re-acquisition of independence loudly and cheered and clapped when she began gnashing her teeth at her oppressors. For me, this film is an outcry for freedom against the dominating behemoth known as Catholicism.

Her growth was twisted and heathenistic – God only matters if you believe in him.

Darlin’s God is survival, and she encounters a new and difficult way to fight for it from within the confines of a Catholic school. But the ever-looming presence of her mother awaits her in the deep forest. In the end, Darlin’ makes a surprising choice, as if to say. “My body is here but my heart and soul are free.”

I was moved to tears more than once, and the post-credits scene is adorable.

Pollyanna McIntosh directs with confidence and she has a tremendous amount of skill.

Spending years in front of the camera probably help a little bit there.

Lauryn Canny, as Darlin’ is captivating, and she sells her character naturally and with fire. Throughout the movie, I didn’t know when she was going to pounce, bite, or stare and growl.  There are life experiences that she encounters at the Catholic school that should not have been traumatic. But the twisted teachings of both her mother and the school made them that way. Darlin’ felt so real.

Everyone needs to give this film a chance. Let expectations and preconceived notions fall away and give yourself to Darlin’s journey. It is the best and most heartfelt horror movie I have seen this year so far.

Want a second opinion? Click here to read an alternate take on Darlin’ from Cinepocalypse 2019.